We propose a Dual-Stream Pyramid Registration Network (referred as Dual-PRNet) for unsupervised 3D medical image registration. Unlike recent CNN-based registration approaches, such as VoxelMorph, which explores a single-stream encoder-decoder network to compute a registration fields from a pair of 3D volumes, we design a two-stream architecture able to compute multi-scale registration fields from convolutional feature pyramids. Our contributions are two-fold: (i) we design a two-stream 3D encoder-decoder network which computes two convolutional feature pyramids separately for a pair of input volumes, resulting in strong deep representations that are meaningful for deformation estimation; (ii) we propose a pyramid registration module able to predict multi-scale registration fields directly from the decoding feature pyramids. This allows it to refine the registration fields gradually in a coarse-to-fine manner via sequential warping, and enable the model with the capability for handling significant deformations between two volumes, such as large displacements in spatial domain or slice space. The proposed Dual-PRNet is evaluated on two standard benchmarks for brain MRI registration, where it outperforms the state-of-the-art approaches by a large margin, e.g., having improvements over recent VoxelMorph [2] with 0.683->0.778 on the LPBA40, and 0.511->0.631 on the Mindboggle101, in term of average Dice score. 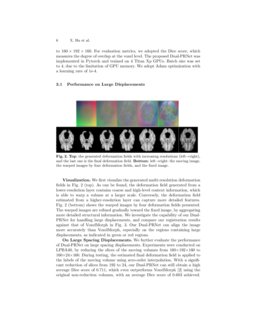 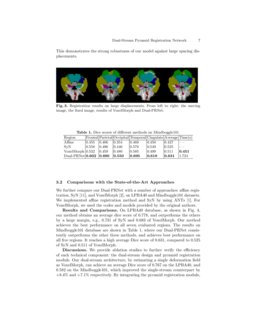 Deformable image registration has been widely used in image diagnostics, disease monitoring, and surgical navigation, with the goal of learning the anatomical correspondence between a moving image and a fixed image. A registration process mainly consists of three steps: establishing a deformation model, designing a similarity measurement function, and a parameter optimization step. Traditional deformable registration methods often cast it into a complex optimization problem that involves intensive computation by densely computing voxel-level similarities. Recent deep learning technologies have advanced this task significantly by developing learning-based approaches, which allow them to leverage strong feature learning capability of deep neural networks

Medical image registration often requires strong supervision information, such as ground-truth registration fields or anatomical landmarks. However, obtaining a large-scale medical dataset with such strong annotations is extremely expensive, which inevitably limits the applications of supervised approaches. Recently, unsupervised learning-based registration methods have been developed, by learning a registration function that maximizes the similarity between a moving image and a fixed image. For example, Balakrishnan

[5]. Kuang and Schmah [7] developed an unsupervised method, named as FAIM, which extends VoxelMorph by improving the network design with a new registration function. However, Lewis et al. [8] demonstrated that the performance of existing CNN-based approaches can be limited on challenging clinical applications where two medical images or volumes may have significant spatial displacements or large slice spaces. It is straightforward to handle such deformations by aligning them in a coarse-to-fine manner.

Contributions. Recent approaches on optical flow estimation [9] attempted to handle large displacements by gradually refining the estimated flows, which inspired the current work. They designed a cascaded architecture where multiple FlowNets were employed to gradually warp the images, while current paper describes a dual-stream single-model approach that implements sequential layer-wise refinements of registration fields, which in turn are used to warp the convolutional features rather than the images. This results in an end-to-end trainable model for 3D medical image registration.

Our work extends recent VoxelMorph [2] with two technical improvements, which are the key to boost the performance. 1) we develop a dual-stream encoder-decoder network able to compute two convolutional feature pyramids separately from a pair of input volumes, resulting in stronger deep representations for estimating multi-level deformations. 2) we propose a pyramid registration module which directly estimates registration fields from convolutional features, resulting in a set of layer-wise registration fields that encode multi-level context information by sequentially warping the convolutional features. This enables the model with the ability to work on significant deformations. 3) we evaluate our model on the LPBA40 and the Mindboggle101, where our method improved the results of VoxelMorph [2] considerably, with 0.683→0.778 and 0.511→ 0.631 respectively, in term of average Dice score.

In this section, we describe the details of the proposed Dual-PRNet, including two main components: (i) a dual-stream encoder-decoder network for computing feature pyramids, and (ii) a pyramid registration module that estimates layer-wise registration fields in the decoding process.

The goal of 3D medical image registration is to estimate a deformation field Φ which can warp a moving volume M⊂R3 to a fixed volume F⊂R3, so that the warped volume W=M∘Φ⊂R3 can be accurately aligned to the fixed one F. We use M∘Φ to denote the application of a deformation field Φ to the moving volume with a warping operation, and image registration can be formulated as an optimization problem:

is a function measuring image similarity between

M∘Φ and F, and Lsmooth is a regularization constraint on Φ, which enforces spatial smoothness. Both Lsim and Lsmooth can be defined in various forms. For example, VoxelMorph [2] uses a CNN to compute a deformation field, Φ=fθ(F,M), where θ

are learnable parameters of the CNN. The deformation warping is implemented by using a spatial transformer network

[5], M∘Φ=fstn(M,Φ). VoxelMorph uses a single-stream encoder-decoder architecture with skip connections, which are similar to U-Net [10]. A pair of volumes, M and F, are stacked as the input of VoxelMorph. More details of VoxelMorph are described in [2].

. Batch normalization (BN) and ReLU operations are applied. More details of the network are presented in Fig. 1 of Supplementary Material (SM).

Dual-stream design allows us to first compute meaningful feature pyramids from two input volumes, and then predict deformable fields from the learned, stronger and more discriminative convolutional features, which is the key to boost the performance. This is different from existing single-stream networks, such as [2] and [7], which compute the convolutional features from two stacked volumes, and jointly estimate deformation fields using same convolutional filters. Furthermore, our dual-stream architecture can generate two paired feature pyramids where layer-wise deformation fields can be computed at multiple scales, allowing the model to generate more meaningful deformation fields by designing a new pyramid registration module, which is described next.

Specifically, the first deformation field (Φ1) is computed at the first decoding layer. We stack the convolutional features from two feature pyramids, and apply a 3D convolution with size of 3×3×

u(Φ1), and (ii) then is applied to warp the convolutional maps of the next layer from the moving volume, by using a grid sample operation, as shown in Fig. 1. Then the warped convolutional maps are stacked again with the corresponding convolutional features generated from the fixed volume, followed by a convolution operation to generate a new deformation field. This process is repeated at each decoding layer, and can be formulated as,

. For evaluation metrics, we adopted the Dice score, which measures the degree of overlap at the voxel level. The proposed Dual-PRNet was implemented in Pytorch and trained on 4 Titan Xp GPUs. Batch size was set to 4, due to the limitation of GPU memory. We adopt Adam optimization with a learning rate of 1e-4.

Visualization. We first visualize the generated multi-resolution deformation fields in Fig. 2 (top). As can be found, the deformation field generated from a lower-resolution layer contains coarse and high-level context information, which is able to warp a volume at a larger scale. Conversely, the deformation field estimated from a higher-resolution layer can capture more detailed features. Fig. 2 (bottom) shows the warped images by four deformation fields presented. The warped images are refined gradually toward the fixed image, by aggregating more detailed structural information. We investigate the capability of our Dual-PRNet for handling large displacements, and compare our registration results against that of VoxelMorph in Fig. 3. Our Dual-PRNet can align the image more accurately than VoxelMorph, especially on the regions containing large displacements, as indicated in green or red regions.

On Large Spacing Displacements. We further evaluate the performance of Dual-PRNet on large spacing displacements. Experiments were conducted on LPBA40, by reducing the slices of the moving volumes from 160×192×160 to 160×24×160. During testing, the estimated final deformation field is applied to the labels of the moving volume using zero-order interpolation. With a significant reduction of slices from 192 to 24, our Dual-PRNet can still obtain a high average Dice score of 0.711, which even outperforms VoxelMorph [2] using the original non-reduction volumes, with an average Dice score of 0.683 achieved. This demonstrates the strong robustness of our model against large spacing displacements.

3.2 Comparisons with the State-of-the-Art Approaches

We further compare our Dual-PRNet with a number of approaches: affine registration, SyN [11], and VoxelMorph [2], on LPBA40 and Mindboggle101 datasets. We implemented affine registration method and SyN by using ANTs [1]. For VoxelMorph, we used the codes and models provided by the original authors.

Results and Comparisons. On LPBA40 database, as shown in Fig. 4, our method obtains an average dice score of 0.778, and outperforms the others by a large margin, e.g., 0.731 of SyN and 0.683 of VoxelMorph. Our method achieves the best performance on all seven evaluated regions. The results on Mindboggle101 database are shown in Table 1, where our Dual-PRNet consistently outperforms the other three methods, and achieves best performance on all five regions. It reaches a high average Dice score of 0.631, compared to 0.525 of SyN and 0.511 of VoxelMorph.

Discussions. We provide ablation studies to further verify the efficiency of each technical component: the dual-stream design and pyramid registration module. Our dual-stream architecture, by estimating a single deformation field as VoxelMorph, can achieve an average Dice score of 0.767 on the LPBA40, and 0.582 on the Mindboggle101, which improved the single-stream counterpart by +8.4% and +7.1% respectively. By integrating the pyramid registration module, the results are further increased, with +1.1% and +4.9% further improvements on the LPBA40 and Mindboggle101 respectively. Notice that the pyramid registration module has a larger improvement on the Mindboggle101, due to the more complicated anatomical structure provided in the Mindboggle101, which often require more accurate labels to identify subtle difference, and coarse-to-fine refinements of the deformation fields can naturally make more contribution.

We have presented a new Dual-Stream Pyramid Registration Network for unsupervised 3D medical image registration. We designed a two-stream 3D encoder-decoder network to compute two convolutional feature pyramids, and then proposed a pyramid registration module which predicts multi-scale registration fields directly from the decoding feature pyramids, allowing for recurrently refining the registration fields and convolutional features. This results in a high-performance model that can better handle large deformations in both spatial and spacing domains. With these technical improvements, our method achieved impressive performance for brain MRI registration, and significantly outperformed recent approaches.