The task of multi-person human pose estimation in natural scenes is quite challenging. Existing methods include both top-down and bottom-up approaches. The main advantage of bottom-up methods is its excellent tradeoff between estimation accuracy and computational cost. We follow this path and aim to design smaller, faster, and more accurate neural networks for the regression of keypoints and limb association vectors. These two regression tasks are naturally dependent on each other. In this work, we propose a dual-path network specially designed for multi-person human pose estimation, and compare our performance with the openpose network in aspects of model size, forward speed, and estimation accuracy. 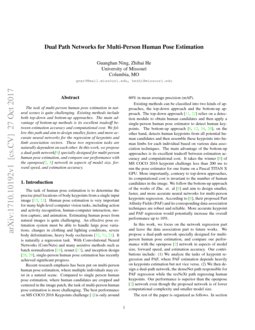 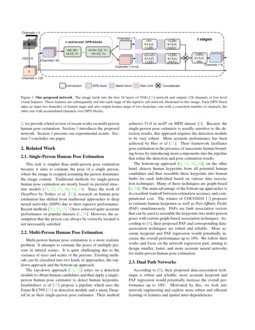 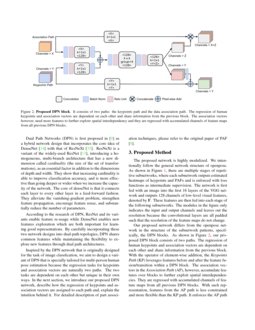 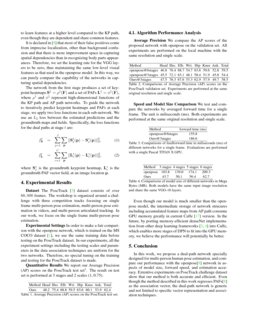 The task of human pose estimation is to determine the precise pixel locations of body keypoints from a single input image [15, 21]

. It is naturally a regression task. With Convolutional Neural Networks (ConvNets) and many assistive methods such as batch normalization

[11, 22] relies on a detection module to obtain human candidates and then apply a single-person human pose estimator to detect human keypoints. The bottom-up approach [8, 12, 34, 20], on the other hand, detects human keypoints from all potential human candidates and then assemble these keypoints into human limbs for each individual based on various data association techniques. The main advantage of the bottom-up approaches is its excellent tradeoff between estimation accuracy and computational cost. It takes the winner [8] of MS COCO 2016 keypoint challenge less than 200 ms to run the pose estimator for one frame on a Pascal TITAN X GPU. More importantly, contrary to top-down approaches, its computational cost is invariant to the number of human candidates in the image. We follow the bottom-up approach of the works of Zhe. et. al [8] and aim to design smaller, faster, and more accurate neural networks for multi-person keypoints regression. According to [8], their proposed Part Affinity Fields (PAF) and its corresponding data-association techniques are robust and reliable. More accurate keypoint and PAF regression would potentially increase the overall performance up to 10%.

In this work, we focus on the network regression part and leave the data association part to future works. We propose a dual-path network specially designed for multi-person human pose estimation, and compare our performance with the openpose [2] network in aspects of model size, forward speed, and estimation accuracy. Our contributions include: (1) We analyze the tasks of keypoint regression and PAF, where PAF estimation depends heavily on keypoints estimation but not vice versa. (2) We then design a dual-path network, the denseNet path responsible for PAF regression while the resNeXt path regressing human keypoints. Our performance is superior than the openpose [2] network even though the proposed network is of lower computational complexity and smaller model size.

The rest of the paper is organized as follows. In section 2, we provide a brief review of recent works on multi-person human pose estimation. Section 3 introduces the proposed network. Section 4 presents our experimental results. Section 5 concludes our paper.

This task is simpler than multi-person pose estimation because it aims to estimate the pose of a single person, where the image is cropped assuming the person dominates the image content. Traditional methods for single-person human pose estimation are mostly based on pictorial structure models [25, 23, 27, 30, 10, 19]. Since the work of DeepPose by Toshev et al. [32], research on human pose estimation has shifted from traditional approaches to deep neural networks (DNN) due to their superior performance. Recent methods [21, 33, 15, 7] have achieved quite accurate performance on popular datasets [6, 18]. However, the assumption that the person can always be correctly located is not necessarily satisfied.

Multi-person human pose estimation is a more realistic problem. It attempts to estimate the poses of multiple persons in natural scenes. It is quite challenging due to the variance of sizes and scales of the persons. Existing methods can be classified into two kinds of approaches, the top-down approach and the bottom-up approach.

The bottom-up approach [8, 12, 34, 20], on the other hand, detects human keypoints from all potential human candidates and then assemble these keypoints into human limbs for each individual based on various data association techniques. Many of these techniques are graph-based [8, 34]. The main advantage of the bottom-up approaches is its excellent tradeoff between estimation accuracy and computational cost. The winner of COCO2016 [1] proposes to estimate human keypoints as well as Part-Affinity Fields (PAF) simultaneously. PAFs are limb association vectors that can be used to assemble the keypoints into multi-person poses with certain graph-based association techniques. According to [8], their proposed PAF and corresponding data-association techniques are robust and reliable. More accurate keypoint and PAF regression would potentially increase the overall performance up to 10%. We follow their works and focus on the network regression part, aiming to design smaller, faster, and more accurate neural networks for multi-person human pose estimation.

According to [8], their proposed data-association technique is robust and reliable; more accurate keypoint and PAF regression would potentially increase the overall performance up to 10%. Motivated by this, we look into network engineering and explore more robust and efficient learning of features and spatial inter-dependencies.

Dual Path Networks (DPN) is first proposed in [9] as a hybrid network design that incorporates the core idea of DenseNet [14] with that of ResNeXt [35]. ResNeXt is a variant of the widely-used ResNet [13], introducing a homogeneous, multi-branch architecture that has a new dimension called cardinality

(the size of the set of transformations), as an essential factor in addition to the dimensions of depth and width. They show that increasing cardinality is able to improve classification accuracy, and is more effective than going deeper or wider when we increase the capacity of the network. The core of denseNet is that it connects each layer to every other layer in a feed-forward fashion. They alleviate the vanishing-gradient problem, strengthen feature propagation, encourage feature reuse, and substantially reduce the number of parameters.

According to the research of DPN, ResNet and its variants enable feature re-usage while DenseNet enables new features exploration which are both important for learning good representations. By carefully incorporating these two network designs into dual-path topologies, DPN shares common features while maintaining the flexibility to explore new features through dual path architectures.

Inspired by the DPN network that is originally designed for the task of image classfication, we aim to design a variant of DPN that is specially tailored for multi-person human pose estimation because the regression tasks for keypoints and association vectors are naturally two paths. The two tasks are dependent on each other but unique in their own ways. In the next section, we introduce our proposed DPN network, describe how the regression of keypoints and association vectors are assigned to each path and, explain the intuition behind it. For detailed description of part association techniques, please refer to the original paper of PAF [8].

The proposed network is highly modulized. We intentionally follow the general network structure of openpose. As shown in Figure 1

, there are multiple stages of repetitive subnetworks, where each subnetwork outputs estimated heatmaps of keypoints and PAFs and is enforced with loss functions as intermediate supervision. The network is first fed with an image into the first 16 layers of the VGG network and outputs 128 channels of low-level visual features, denoted by

. These features are then fed into each stage of the following subnetworks. The modules in the figure only indicates the input and output channels and leaves out the resolution because the convolutional layers are all padded such that the resolution of the feature maps do not change.

Our proposed network differs from the openpose network in the structure of the subnetwork patterns, specifically, the DPN blocks. As shown in Figure 2, our proposed DPN block consists of two paths. The regression of human keypoints and association vectors are dependent on each other and share information from the previous block. With the operator of element-wise addition, the Keypoints Path (KP) leverages features before and after the feature fusion/transition within a DPN block. The association vectors in the Association Path (AP), however, accumulate features over blocks to further exploit spatial interdependencies. They are regressed with accumulated channels of feature maps from all previous DPN blocks. With such representation, features from the AP path is less constrained and more flexible than the KP path. It enforces the AP path to learn features at a higher level compared to the KP path, even though they are dependent and share common features.

It is declared in [8] that most of their false positives come from imprecise localization, other than background confusion and that there is more improvement space in capturing spatial dependencies than in recognizing body parts appearances. Therefore, we set the learning rate for the VGG layers to be zero, thus maintaining the same low-level visual features as that used in the openpose model. In this way, we can purely compare the capability of the networks in capturing spatial dependencies.

The network from the first stage produces a set of keypoint heatmaps S1=ρ1(F) and a set of PAFs L1=ϕ1(F), where ρ1 and ϕ1 represent high-dimensional functions of the KP path and AP path networks. To guide the network to iteratively predict keypoint heatmaps and PAFs at each stage, we apply two loss functions in each sub-network. We use an L2 loss between the estimated predictions and the groundtruth maps and fields. Specifically, the loss functions for the dual paths at stage t are:

Experimental Settings In order to make a fair comparison with the openpose network, which is trained on the MS COCO dataset [1], we use the same training data before testing on the PoseTrack dataset. In our experiments, all the experiment settings including the testing scales and parameters in the data association techniques are uniform for the two networks. Therefore, no special tuning on the training and testing for the PoseTrack dataset is made.

Quantitative Results We report our Average Precision (AP) scores on the PoseTrack test set11endnote: 1Performance on test set is evalutaed by the PoseTrack server. Challenge results available at: https://posetrack.net/workshops/iccv2017/posetrack-challenge-results.html. The result on test set is performed at 3 stages and 2 scales (1, 0.75).

Average Precision We compare the AP scores of the proposed network with openpose on the validation set. All experiments are performed on the local machine with the same resolution and single scale.

Speed and Model Size Comparison We test and compare the networks by averaged forward time for a single frame. The unit is miliseconds (ms). Both experiments are performed at the same original resolution and single scale.

Even though our model is much smaller than the openpose model, the intermediate storage of network strucures including accumulated feature maps from AP path consume GPU memory greatly in current Caffe

version. In the future, by porting memory-efficient denseNet implementation from other deep learning frameworks

[5, 4] into Caffe, which enables more stages of DPN to fit into the GPU memory, we believe the performance will potentially be better.

In this work, we propose a dual-path network specially designed for multi-person human pose estimation, and compare our performance with the openpose[8] network in aspects of model size, forward speed, and estimation accuracy. Extentive experiments on PoseTrack challenge dataset show that our method is both accurate and efficient. Even though the method described in this work regresses PAFs[8] as the association vector, the dual-path network is generic and not limited to specific vector representation and association techniques.