Characters have commonly been regarded as the minimal processing unit in Natural Language Processing (NLP). But many non-latin languages have hieroglyphic writing systems, involving a big alphabet with thousands or millions of characters. Each character is composed of even smaller parts, which are often ignored by the previous work. In this paper, we propose a novel architecture employing two stacked Long Short-Term Memory Networks (LSTMs) to learn sub-character level representation and capture deeper level of semantic meanings. To build a concrete study and substantiate the efficiency of our neural architecture, we take Chinese Word Segmentation as a research case example. Among those languages, Chinese is a typical case, for which every character contains several components called radicals. Our networks employ a shared radical level embedding to solve both Simplified and Traditional Chinese Word Segmentation, without extra Traditional to Simplified Chinese conversion, in such a highly end-to-end way the word segmentation can be significantly simplified compared to the previous work. Radical level embeddings can also capture deeper semantic meaning below character level and improve the system performance of learning. By tying radical and character embeddings together, the parameter count is reduced whereas semantic knowledge is shared and transferred between two levels, boosting the performance largely. On 3 out of 4 Bakeoff 2005 datasets, our method surpassed state-of-the-art results by up to 0.4 GitHub. 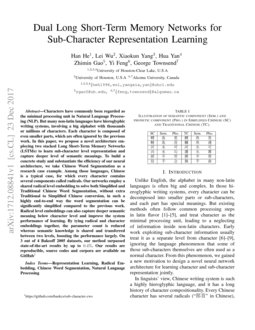 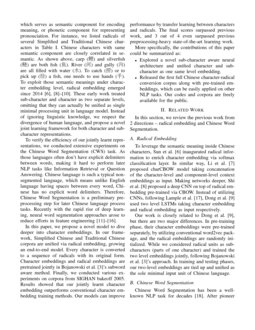 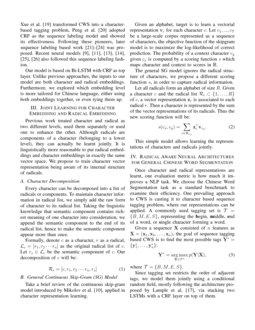 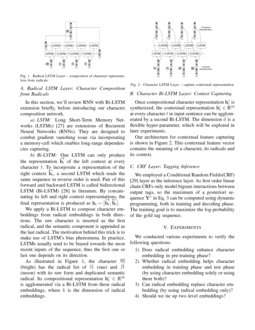 Unlike English, the alphabet in many non-latin languages is often big and complex. In those hieroglyphic writing systems, every character can be decomposed into smaller parts or sub-characters, and each part has special meanings. But existing methods often follow common processing steps in latin flavor [1, 2, 3, 4, 5], and treat character as the minimal processing unit, leading to a neglecting of information inside non-latin characters. Early work exploiting sub-character information usually treat it as a separate level from character [6, 7, 8, 9], ignoring the language phenomenon that some of those sub-characters themselves are often used as normal characters. From this phenomenon, we gained a new motivation to design a novel neural network architecture for learning character and sub-character representation jointly.

In linguists’ view, Chinese writing system is such a highly hieroglyphic language, and it has a long history of character compositionality. Every Chinese character has several radicals (“部首” in Chinese), which serves as semantic component for encoding meaning, or phonetic component for representing pronouciation. For instance, we listed radicals of several Simplified and Traditional Chinese characters in Table I. Chinese characters with same semantic component are closely correlated in semantic. As shown above, carp (鲤) and silverfish (鲢) are both fish (鱼). River (河) and gully (沟) are all filled with water (水). To catch (捞) or to pick up (捡) a fish, one needs to use hands (手). To exploit those semantic meanings under character embedding level, radical embedding emerged since 2014 [6, 8, 10, 9]. These early work treated sub-character and character as two separate levels, omitting that they can actually be unified as single minimal processing unit in language model. Instead of ignoring linguistic knowledge, we respect the divergence of human language, and propose a novel joint learning framework for both character and sub-character representations.

To verify the efficiency of our jointly learnt representations, we conducted extensive experiments on the Chinese Word Segmentation (CWS) task. As those languages often don’t have explicit delimiters between words, making it hard to perform later NLP tasks like Information Retrieval or Question Answering. Chinese language is such a typical non-segmented language, which means unlike English language having spaces between every word, Chinese has no explicit word delimiters. Therefore, Chinese Word Segmentation is a preliminary pre-processing step for later Chinese language process tasks. Recently with the rapid rise of deep learning, neural word segmentation approaches arose to reduce efforts in feature engineering [11, 12, 13, 14, 15, 16].

More specifically, the contributions of this paper could be summarized as:

In this section, we review the previous work from 2 directions – radical embedding and Chinese Word Segmentation.

Our work is closely related to Dong et al.[9], but there are two major differences. In pre-training phase, their character embeddings were pre-trained separately, by utilizing conventional word2vec package, and the radical embeddings are randomly initialized. While we considered radical units as sub-characters (parts of one character) and trained the two level embeddings jointly, following Bojanowski et al. [3]’s approach. In training and testing phases, our two-level embeddings are tied up and unified as the sole minimal input unit of Chinese language.

Our model is based on Bi-LSTM with CRF as top layer. Unlike previous approaches, the inputs to our model are both character and radical embeddings. Furthermore, we explored which embedding level is more tailored for Chinese language, either using both embeddings together, or even tying them up.

Previous work treated character and radical as two different levels, used them separately or used one to enhance the other. Although radicals are components of a character (belonging to a lower level), they can actually be learnt jointly. It is linguistically more reasonable to put radical embeddings and character embeddings in exactly the same vector space. We propose to train character vector representation being aware of its internal structure of radicals.

Formally, denote c as a character, r as a radical, Lc=[r1,r2⋯rn] as the original radical list of c. Let rs∈Lc be the semantic component of c. Our decomposition of c will be:

Given an alphabet, target is to learn a vectorial representation vc for each character c. Let c1,...,cT

be a large-scale corpus represented as a sequence of characters, the objective function of the skipgram model is to maximize the log-likelihood of correct prediction. The probability of a context character

cy given cx is computed by a scoring function s which maps character and context to scores in R.

The general SG model ignores the radical structure of characters, we propose a different scoring function s, in order to capture radical information.

This simple model allows learning the representations of characters and radicals jointly.

Once character and radical representations are learnt, one evaluation metric is how much it improves a NLP task. We choose the Chinese Word Segmentation task as a standard benchmark to examine their efficiency. One prevailing approach to CWS is casting it to character based sequence tagging problem, where our representations can be applied. A commonly used tagging set is

T={B,M,E,S}, representing the begin, middle, end of a word, or single character forming a word.

Given a sequence X consisted of n features as X=(x1,x2,…,xn), the goal of sequence tagging based CWS is to find the most possible tags Y∗={y∗1,…,y∗n}:

Since tagging set restricts the order of adjacent tags, we model them jointly using a conditional random field, mostly following the architecture proposed by Lample et al.[17], via stacking two LSTMs with a CRF layer on top of them.

In this section, we’ll review RNN with Bi-LSTM extension briefly, before introducing our character composition network.

are extensions of Recurrent Neural Networks (RNNs). They are designed to combat gradient vanishing issue via incorporating a memory-cell which enables long-range dependencies capturing.

One LSTM can only produce the representation →ht of the left context at every character t. To incorporate a representation of the right context ←ht, a second LSTM which reads the same sequence in reverse order is used. Pair of this forward and backward LSTM is called bidirectional LSTM (Bi-LSTM) [28] in literature. By concatenating its left and right context representations, the final representation is produced as ht=[→ht;←ht].

We apply a Bi-LSTM to compose character embeddings from radical embeddings in both directions. The raw character is inserted as the first radical, and the semantic component is appended as the last radical. The motivation behind this trick is to make use of LSTM’s bias phenomena. In practice, LSTMs usually tend to be biased towards the most recent inputs of the sequence, thus the first one or last one depends on its direction.

As illustrated in Figure 1, the character 明 (bright) has the radical list of 日 (sun) and 月 (moon) with its raw form and duplicated semantic radical. Its compositional representation hri∈R2k is agglomerated via a Bi-LSTM from these radical embeddings, where k is the dimension of radical embeddings.

Once compositional character representation hri is synthesized, the contextual representation hct∈R2d at every character t in input sentence can be agglomerated by a second Bi-LSTM. The dimension d is a flexible hyper-parameter, which will be explored in later experiments.

We employed a Conditional Random Fields(CRF) [29] layer as the inference layer. As first order linear chain CRFs only model bigram interactions between output tags, so the maximum of a posteriori sequence Y∗ in Eq. 3 can be computed using dynamic programming, both in training and decoding phase. The training goal is to maximize the log-probability of the gold tag sequence.

We conducted various experiments to verify the following questions:

To explore these questions, we experimented on the 4 prevalent CWS benchmark datasets from SIGHAN2005 [30]. Following conventions, the last 10% sentences of training set are used as development set.

We obtained radical lists of character from the online Xinhua Dictionary222http://tool.httpcn.com/Zi/, which are included in our open-source project.

Previous work have shown that pre-trained embeddings on large unlabeled corpus can improve performance. It usually involves lots of efforts to preprocess those corpus. Here we presented a novel solution.

The corpus used is Chinese Wikipedia of July 2017. Unlike most approaches, we don’t perform Traditional Chinese to Simplified Chinese conversion. Our radical decomposition is sufficient of associate character to its similar variants. Not only traditional-simplified character pairs, those with similar radical decompositions will also share similar vectorial representations.

Further, instead of the commonly used word2vec [2], we utilized fastText333https://github.com/facebookresearch/fastText With tiny modification to output n-gram vectors. [3] to train character embeddings and radical embeddings jointly. We applied SG model, 100 dimension, and set both maximum and minimal n-gram length to 1, as the radical takes only one token.

All experiments are conducted with standard Bakeoff scoring program444http://www.sighan.org/bakeoff2003/score This script rounds a score to one digit. calculating precision, recall, and F1-score. Note that results with ♢ expurgated long words in test set.

Tying two level embeddings up is a good idea. By tying radical embeddings and character embeddings together (+radical +tie), the raw feature is unified into the same vector space, knowledge is transferred between two levels, and performance is boosted up to 0.2%.

In this paper, we proposed a novel neural network architecture with dedicated pre-training techniques to learn character and sub-character representations jointly. As an concrete application example, we unified Simplified and Traditional Chinese characters through sub-character or radical embeddings. We have utilized a practical way to train radical and character embeddings jointly. Our experiments showed that sub-character information can enhance character representations for a pictographic language like Chinese. By using both level embeddings and tying them up, our model has gained the most benefit and surpassed previous single criterial CWS systems on 3 datasets.

Our radical embeddings framework can be applied to extensive NLP tasks like POS-tagging and Named Entity Recognition (NER) for various hieroglyphic languages. These tasks will benefit from deeper level of semantic representations encoded with more linguistic knowledge.