State-of-the-art video action recognition models with complex network architecture have archived significant improvements, but these models heavily depend on large-scale well-labeled datasets. To reduce such dependency, we propose a self-supervised teacher-student architecture, i.e., the Differentiated Teachers Guided self-supervised Network (DTG-Net). In DTG-Net, except for reducing labeled data dependency by self-supervised learning (SSL), pre-trained action related models are used as teacher guidance providing prior knowledge to alleviate the demand for a large number of unlabeled videos in SSL. Specifically, leveraging the years of effort in action-related tasks, e.g., image classification, image-based action recognition, the DTG-Net learns the self-supervised video representation under various teacher guidance, i.e., those well-trained models of action-related tasks. Meanwhile, the DTG-Net is optimized in the way of contrastive self-supervised learning. When two image sequences are randomly sampled from the same video or different videos as the positive or negative pairs, respectively, they are then sent to the teacher and student networks for feature embedding. After that, the contrastive feature consistency is defined between features embedding of each pair, i.e., consistent for positive pair and inconsistent for negative pairs. Meanwhile, to reflect various teacher tasks' different guidance, we also explore different weighted guidance on teacher tasks. Finally, the DTG-Net is evaluated in two ways: (i) the self-supervised DTG-Net to pre-train the supervised action recognition models with only unlabeled videos; (ii) the supervised DTG-Net to be jointly trained with the supervised action networks in an end-to-end way. Its performance is better than most pre-training methods but also has excellent competitiveness compared to supervised action recognition methods. 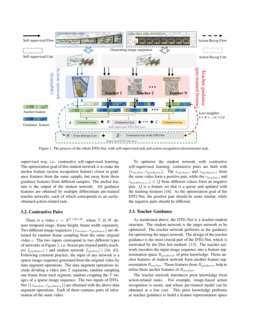