A parameter estimation problem for a class of semilinear stochastic evolution equations is considered. Conditions for consistency and asymptotic normality are given in terms of growth and continuity properties of the nonlinear part. Emphasis is put on the case of stochastic reaction-diffusion systems. Robustness results for statistical inference under model uncertainty are provided. 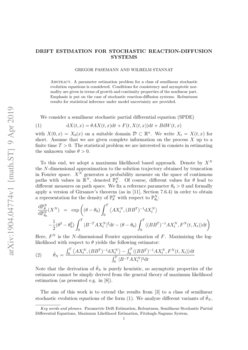 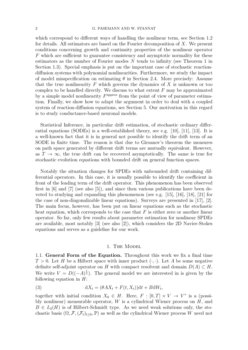 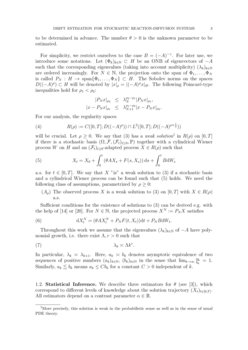 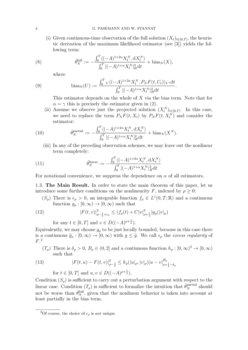 Diffusivity Estimation for Activator-Inhibitor Models: Theory and Application to Intracellular Dynamics of the Actin Cytoskeleton

This work contributes to the limited literature on estimating the diffus...
Randolf Altmeyer, et al. ∙

With the goal of well-founded statistical inference on an individual's b...
Maria Allayioti, et al. ∙

AReS and MaRS - Adversarial and MMD-Minimizing Regression for SDEs

1.1. General Form of the Equation

Throughout this work we fix a final time T>0. Let H be a Hilbert space with inner product (⋅,⋅). Let A be some negative definite self-adjoint operator on H with compact resolvent and domain D(A)⊂H. We write V=D((−A)12). The general model we are interested in is given by the following equation in H:

together with initial condition X0∈H. Here, F:[0,T]×V→V∗ is a (possibly nonlinear) measurable operator, W is a cylindrical Wiener process on H, and B∈L2(H) is of Hilbert-Schmidt type. As we need weak solutions only, the stochastic basis (Ω,F,(Ft)t≥0,P) as well as the cylindrical Wiener process W need not to be determined in advance. The number θ>0 is the unknown parameter to be estimated.

For simplicity, we restrict ourselves to the case B=(−A)−γ. For later use, we introduce some notations. Let (Φk)k∈N⊂H

be an ONB of eigenvectors of

such that the corresponding eigenvalues (taking into account multiplicity)

For our analysis, the regularity spaces

will be crucial. Let ρ≥0. We say that (3) has a weak solution111More precisely, this solution is weak in the probabilistic sense as well as in the sense of usual PDE theory. in R(ρ) on [0,T] if there is a stochastic basis (Ω,F,(Ft)t≥0,P) together with a cylindrical Wiener process W on H and an (Ft)t≥0-adapted process X∈R(ρ) such that

a.s. for t∈[0,T]. We say that X ”is” a weak solution to (3) if a stochastic basis and a cylindrical Wiener process can be found such that (5) holds. We need the following class of assumptions, parametrized by ρ≥0:

Sufficient conditions for the existence of solutions to (3) can be derived e.g. with the help of [14] or [20]. For N∈N, the projected process XN:=PNX satisfies

Throughout this work we assume that the eigenvalues (λk)k∈N of −A have polynomial growth, i.e. there exist Λ,r>0 such that

We describe three estimators for θ (see [3]), which correspond to different levels of knowledge about the solution trajectory (Xt)t∈[0,T]. All estimators depend on a contrast parameter α∈R.

For notational convenience, we suppress the dependence on α of all estimators.

In order to state the main theorem of this paper, let us introduce some further conditions on the nonlinearity F, indexed by ρ≥0:

Equivalently, we may choose gρ to be just locally bounded, because in this case there is a continuous ~gρ:[0,∞)→[0,∞) with g≤~g. We call ϵρ the excess regularity of F.222Of course, the choice of ϵρ is not unique.

Condition (Sρ) is sufficient to carry out a perturbation argument with respect to the linear case. Condition (Tρ) is sufficient to formalize the intuition that ^θpartialN should not be worse than ^θfullN, given that the nonlinear behavior is taken into account at least partially in the bias term.

The regularity ρ≥0 must be chosen maximally, i.e. ρ is the maximal value such that (Aρ) holds with probability one. Under the standing assumption B=(−A)−γ, we have the following result:

We now illustrate the general theory by means of some examples. More precisely, we show that (Sρ) and/or (Tρ) hold. We write F(v)=F(t,v) whenever the nonlinearity in these examples does not depend on time explicitly.

For completeness, we restate the result for the purely linear case F=0. In this case we can drop condition (Sρ). All estimators coincide, i.e. ^θfullN=^θpartialN=^θlinearN, and Theorem 1 reads as follows:

in distribution as N→∞.

In this section, we consider a bounded domain D⊂Rn, n≥1, with Dirichlet boundary conditions.333The argument does not depend on the boundary conditions, so Neumann- or Robin-type conditions may be used instead. Set H=L2(D;Rk), where k∈N is the number of coupled equations. A is the Laplacian with domain D(−A)=(H2(D)∩H10(D))k. Let F be a Nemytskii-type operator on Rk, i.e. F(u)(x)=F(u(x)), whose components are polynomials in k variables. The highest degree of the component polynomials of F will be denoted by mF. We assume that mF>1.

is assumed to satisfy (Aρ) for a suitable (maximal) ρ≥0.

Note that the same proof allows to cover the more general case of polynomial nonlinearities whose coefficients depend on x∈D, as long as these coefficients are regular enough.

Consider the important special case n=1 and mF≤3. In this case, (Sρ) is true for any ρ≥0. Furthermore, ϵρ=56>34=1+r−12, so part (iv) of Theorem 1 applies. All three estimators are asymptotically normal without further assumptions on the regularity of X.

We point out that the validity of this example has been conjectured in [2]. Consider the stochastic viscous Burgers’ equation

We follow the convention to denote the viscosity parameter by ν instead of θ. Likewise, the estimators will be called ^νfullN, ^νpartialN and ^νlinearN. Existence and uniqueness of a solution X to (21) can be shown as in [14]. We need just slightly more regularity, i.e. (Aρ) for some ρ>0, in order to infer (Sρ).

In one spatial dimension, the Sobolev space Hs(D) is an algebra for s>12. So,

Let ρ>0 be the maximal regularity of X and α>γ−316=ρ+116. Then the estimator ^νfullN is asymptotically normal with rate N32 and asymptotic variance V given by

Similar calculations show that (Tρ) holds with Bρδρ=1, which is not sufficient to transfer asymptotic normality to ^νpartialN but yields consistency with rate at least N.

In the preceding examples we assumed that the dynamical law of the process we are interested in is perfectly known. However, it may be reasonable to consider the case when this is not true. We may formalize such a partially unknown model as

where G:[0,T]×V→V∗ is an unknown perturbation. We assume that the model is well-posed (i.e. (Aρ) holds for suitable ρ≥0) and that F satisfies (Sρ). Let ^θfullN, ^θpartialN and ^θlinearN be given by the same terms as before, i.e. ^θfullN and ^θpartialN include knowledge on F but not on G.

This follows directly from the discussion in Subsection 4.2, taking into account the decomposition

Said another way, the excess regularity of G determines essentially to what extent the results from Theorem 1 remain valid. A high value for ϵGρ corresponds to a small perturbation.

We simulate the Allen-Cahn equation

on [0,1] with Dirichlet boundary conditions and initial condition X0(x)=sin(πx). We discretize the equation in Fourier space and simulate N0=100 modes with a linear-implicit Euler scheme with temporal stepsize htemp=2.5×10−5 up to time T=1. The spatial grid is uniform with mesh hspace=5×10−4. The true parameter is θ=0.02. We have run M=1000 Monte-Carlo simulations for each of the choices γ=0.4 and γ=0.8. In any case, we have set α=γ. Remember that in this setting all estimators are asymptotically normal.

Figure 1 illustrates consistency, the convergence rate and the asymptotic distribution from Theorem 1. As expected, the values of ^θfullN and ^θpartialN are closer to each other than to ^θlinearN. Note that the quality of ^θlinearN in this simulation depends on the level of noise given by γ, with decreasing accuracy under smooth noise. Our interpretation is that the nonlinearity becomes more highlighted if the noise is less rough.

We mention that for simulations with even higher values of γ (take γ=1.3), the values of ^θlinearN are mostly negative and therefore not related to the true parameter, while ^θfullN and ^θpartialN stay consistent. Of course, this effect may be influenced by the number of Fourier modes N0 used for the simulation.

We follow closely the arguments which have been given in [3]

for the special case of the Navier-Stokes equations in two dimensions. Using a slightly different version of the central limit theorem (CLT) for local martingales, we obtain a direct proof of the asymptotic normality for

4.1. Asymptotic Estimates for the Linear Case

First, we recall briefly some results for the case F=0. Consider the linear equation

where (Wk)k∈N are independent one-dimensional Brownian motions, and the solutions have the explicit representation

Use that ¯¯¯xks and ¯¯¯xkt, s≤t, are jointly Gaussian with mean zero and