The aim of this paper is to study the asymptotic properties of the maximum likelihood estimator (MLE) of the drift coefficient for fractional stochastic heat equation driven by an additive space-time noise. We consider the traditional for stochastic partial differential equations statistical experiment when the measurements are performed in the spectral domain, and in contrast to the existing literature, we study the asymptotic properties of the maximum likelihood (type) estimators (MLE) when both, the number of Fourier modes and the time go to infinity. In the first part of the paper we consider the usual setup of continuous time observations of the Fourier coefficients of the solutions, and show that the MLE is consistent, asymptotically normal and optimal in the mean-square sense. In the second part of the paper we investigate the natural time discretization of the MLE, by assuming that the first N Fourier modes are measured at M time grid points, uniformly spaced over the time interval [0,T]. We provide a rigorous asymptotic analysis of the proposed estimators when N goes to infinity and/or T, M go to infinity. We establish sufficient conditions on the growth rates of N, M and T, that guarantee consistency and asymptotic normality of these estimators. 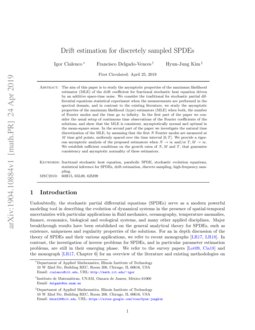 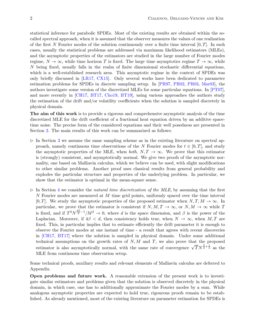 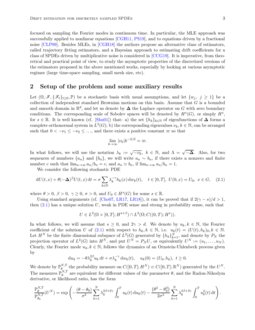 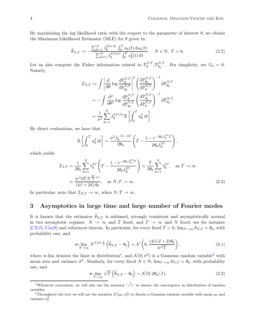 Undoubtedly, the stochastic partial differential equations (SPDEs) serve as a modern powerful modeling tool in describing the evolution of dynamical systems in the presence of spatial-temporal uncertainties with particular applications in fluid mechanics, oceanography, temperature anomalies, finance, economics, biological and ecological systems, and many other applied disciplines. Major breakthrough results have been established on the general analytical theory for SPDEs, such as existence, uniqueness and regularity properties of the solutions. For an in depth discussion of the theory of SPDEs and their various applications, we refer to recent monographs [LR17, LR18]. In contrast, the investigation of inverse problems for SPDEs, and in particular parameter estimation problems, are still in their emerging phase. We refer to the survey papers [Lot09, Cia18] and the monograph [LR17, Chapter 6] for an overview of the literature and existing methodologies on statistical inference for parabolic SPDEs. Most of the existing results are obtained within the so-called spectral approach, when it is assumed that the observer measures the values of one realization of the first N Fourier modes of the solution continuously over a finite time interval [0,T]. In such cases, usually the statistical problems are addressed via maximum likelihood estimators (MLEs), and the asymptotic properties of the estimators are studied in the large number of Fourier modes regime, N→∞, while time horizon T is fixed. The large time asymptotics regime T→∞, while N being fixed, usually falls in the realm of finite dimensional stochastic differential equations, which is a well-established research area. This asymptotic regime in the context of SPDEs was only briefly discussed in [LR17, CX15]. Only several works have been dedicated to parameter estimation problems for SPDEs in discrete sampling setup. In [PR97, PR02, PR03, Mar03], the authors investigate some version of the discretized MLEs for some particular equations. In [PT07], and more recently in [CH17, BT17, Cho19, BT19], using various approaches the authors study the estimation of the drift and/or volatility coefficients when the solution is sampled discretely in physical domain.

The aim of this work is to provide a rigorous and comprehensive asymptotic analysis of the time discretized MLE for the drift coefficient of a fractional heat equation driven by an additive space-time noise. The precise form of the considered equations and their well posedness are presented in Section 2. The main results of this work can be summarized as follows:

Some technical proofs, auxiliary results and relevant elements of Malliavin calculus are deferred to Appendix.

Open problems and future work. A reasonable extension of the present work is to investigate similar estimators and problems given that the solution is observed discretely in the physical domain, in which case, one has to additionally approximate the Fourier modes by a sum. While analogous asymptotic properties are expected to hold true, rigourous proofs remain to be established. As already mentioned, most of the existing literature on parameter estimation for SPDEs is focused on sampling the Fourier modes in continuous time. In particular, the MLE approach was successfully applied to nonlinear equations [CGH11, PS19], and to equations driven by a fractional noise [CLP09]. Besides MLEs, in [CGH18] the authors propose an alternative class of estimators, called trajectory fitting estimators, and a Bayesian approach to estimating drift coefficients for a class of SPDEs driven by multiplicative noise is considered in [CCG19]. It is imperative, from theoretical and practical point of view, to study the asymptotic properties of the discretized versions of the estimators proposed in the above mentioned works, especially by looking at various asymptotic regimes (large time-space sampling, small mesh size, etc).

2 Setup of the problem and some auxiliary results

Let (Ω,F,{Ft}t≥0,P) be a stochastic basis with usual assumptions, and let {wj, j≥1} be a collection of independent standard Brownian motions on this basis. Assume that G is a bounded and smooth domain in Rd, and let us denote by Δ the Laplace operator on G with zero boundary conditions. The corresponding scale of Sobolev spaces will be denoted by Hs(G), or simply Hs, for s∈R. It is well known (cf. [Shu01]) that: a) the set {hk}k∈N

; b) the corresponding eigenvalues

We consider the following stochastic PDE

In what follows, we will assume that s≥0, and 2γ>d. We denote by uk,k∈N, the Fourier coefficient of the solution U of (2.1) with respect to hk,k∈N, i.e. uk(t)=(U(t),hk)0,k∈N. Let HN be the finite dimensional subspace of L2(G) generated by {hk}Nk=1, and denote by PN the projection operator of L2(G) into HN, and put UN=PNU, or equivalently UN:=(u1,…,uN). Clearly, the Fourier mode uk,k∈N, follows the dynamics of an Ornstein-Uhlenbeck process given by

We denote by PN,Tθ the probability measure on C([0,T];HN)⋍C([0,T];RN) generated by the UN. The measures PN,Tθ are equivalent for different values of the parameter θ, and the Radon-Nikodym derivative, or likelihood ratio, has the form

By maximizing the log likelihood ratio with the respect to the parameter of interest θ, we obtain the Maximum Likelihood Estimator (MLE) for θ given by

Let us also compute the Fisher information related to PN,Tθ/PN,Tθ0. For simplicity, set U0=0. Namely,

By direct evaluations, we have that

3 Asymptotics in large time and large number of Fourier modes

It is known that the estimator ˆθN,T is unbiased, strongly consistent and asymptotically normal in two asymptotic regimes: N→∞ and T fixed, and T→∞ and N fixed; see for instance [CX15, Cia18] and references therein. In particular, for every fixed T>0, limN→∞θN,T=θ0, with probability one, and

where w-lim denotes the limit in distribution111Whenever convenient, we will also use the notation ‘d⟶’ to denote the convergence in distribution of random variables., and N(0,¯σ2)

is a Gaussian random variable

222Throughout the text we will use the notation N(μ0,σ20) to denote a Gaussian random variable with mean μ0 and variance σ20.

with mean zero and variance

¯σ2. Similarly, for every fixed N∈N, limT→∞θN,T=θ0, with probability one, and

To the best of our knowledge, the asymptotic properties of ˆθN,T when (both) T,N→∞ is not studied in the current literature. Besides this being an important question alone, the obtained results in this section will also serve as theoretical basis for investigating the statistical properties of the discretized version of the MLE studied later in this paper. In view of the above, naturally one should expect that the joint time-space consistency limN,T→∞θN,T=θ0 is satisfied. On the other hand, by (3.1)

and by (3.2) same result holds for the swaped limiting order T→∞,N→∞. While (3.3) does not have great statistical meaning, it leads to a reasonable ansatz that same identity (3.3) should be satisfied when both N,T→∞. Also note that, in view of (2.3), this estimator is also optimal in the mean-square sense, having the rate of convergence dictated by the Fisher information. Next we give a rigourous proof of these results.

it is straightforward to show that

), we will use the strong law of large numbers

where C1,C2,C3,C4,C5>0 are some constants333Notoriously, we will denote by C with subindexes generic constants that may change from line to line. independent of T. Using the uniform boundedness of the above series, and employing the strong law of large numbers, we deduce that for every ε>0 and T≥T0, there exists N0>0 independent of T such that for N≥N0,

with probability one. Therefore,

Next, we will prove asymptotic normality property (3.5), starting with representation

for some C3>0, independent of N, and T. We will verify the classical Lindeberg condition [Shi96, Theorem III.5.1], namely that for every ε>0,

By Cauchy-Schwartz inequality and Chebyshev inequality,

We also note that

In view of the strong law of large numbers,

with probability one. Finally, combining all the above and using Slutzky’s theorem, (3.5) follows at once. This completes the proof. ∎

3.1 Asymptotic normality of the MLE by Malliavin-Stein’s approach

In this section, we give an alternative proof of (3.5) using tools and results from Malliavin calculus. While this method of proof has its stand along value, we also believe that it will serve as a theoretical base for future studies related to other discretized estimators and different asymptotic regimes.

As before, let U0=0, and for convenience, in this section we will use the following notations:

where C2N,T:=E(F2(N,T)). We note that ˆFN can be written as a double stochastic integral and in view of [NP12, Theorem 2.7.7], ˆFN belongs to the second-order chaos; see also Appendix B. Next we present a key technical result.

Let H be the space endowed with the inner product defined in (B.1). Let D be the Malliavin derivative defined in (B.3). Then, we have

The proof of Lemma 3.2 is deferred to Appendix A.

with probability 1. On the other hand, by Lemma 3.2, we have

Hence, by Slutzky’s theorem, we deduce that CN,T(FN,T−ˆFN,T)d⟶0 , as N,T→∞, which consequently implies that

Consequently, Theorem B.2 implies that

which implies (3.5), and the proof is complete.

4 Asymptotic properties of the discretized MLE

In this section, we investigate statistical properties of the discretized version of MLE (2.2). Towards this end, we assume that the Fourier modes uk(t), k≥1, are observed at a uniform time grid

We consider the discretized MLE ˜θN,M,T defined by

We are interested in studying the asymptotic properties of ˜θN,M,T, as N,M,T→∞.

For simplicity of writing, we also introduce the following notations:

A key step in the proofs of the main results is to write ˜θN,M,T as