We consider the problem of estimation of the drift parameter of an ergodic Ornstein–Uhlenbeck type process driven by a Lévy process with heavy tails. The process is observed continuously on a long time interval [0,T], T→∞. We prove that the statistical model is locally asymptotic mixed normal and the maximum likelihood estimator is asymptotically efficient. 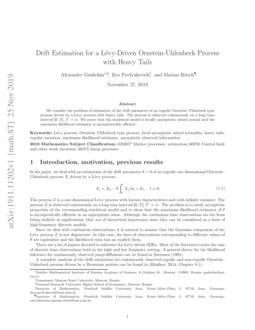 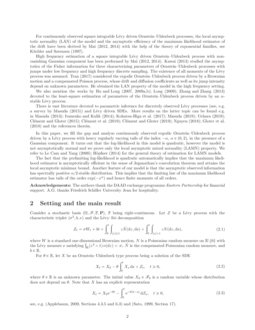 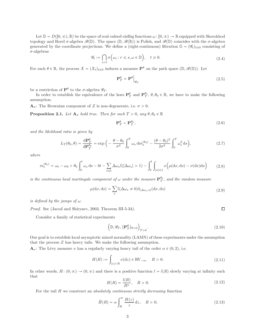 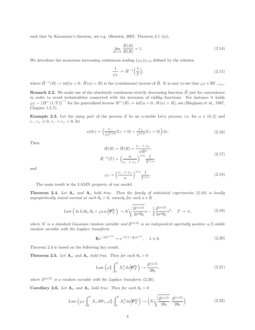 We discuss estimation problems where a polynomial is observed under Orns...
Reinhard Höpfner, et al. ∙

We study the maximum likelihood estimator of the drift parameters of a s...
Antoine Lejay, et al. ∙

The main goal of this paper is to study the parameter estimation problem...
Ziteng Cheng, et al. ∙

In his paper, we deal with an estimation of the drift parameter θ>0 of an ergodic one-dimensional Ornstein–Uhlenbeck process X driven by a Lévy process:

is a one-dimensional Lévy process with known characteristics and with infinite variance. The process

X is observed continuously on a long time interval [0,T], T→∞. The problem is to study asymptotic properties of the corresponding statistical model and to show that the maximum likelihood estimator of θ is asymptotically efficient in an appropriate sense. Although the continuous time observations are far from being realistic in applications, they are of theoretical importance since they can be considered as a limit of high frequency discrete models.

Since we deal with continuous observations, it is natural to assume that the Gaussian component of the Lévy process Z is not degenerate. In this case, the laws of observations corresponding to different values of θ are equivalent and the likelihood ratio has an explicit form.

There are a lot of papers devoted to inference for Lévy driven SDEs. Most of the literature treats the case of discrete time observations both in the high and low frequency setting. A general theory for the likelihood inference for continuously observed jump-diffusions can be found in Sørensen (1991).

A complete analysis of the drift estimation for continuously observed ergodic and non-ergodic Ornstein–Uhlenbeck process driven by a Brownian motion can be found in (Höpfner, 2014, Chapter 8.1).

For continuously observed square integrable Lévy driven Ornstein–Uhlenbeck processes, the local asymptotic normality (LAN) of the model and the asymptotic efficiency of the maximum likelihood estimator of the drift have been derived by Mai (2012, 2014) with the help of the theory of exponential families, see Küchler and Sørensen (1997).

studied the asymptotics of the Fisher information for three characterizing parameters of Ornstein–Uhlenbeck processes with jumps under low frequency and high frequency discrete sampling. The existence of all moments of the Lévy process was assumed.

Tran (2017) considered the ergodic Ornstein–Uhlenbeck process driven by a Brownian motion and a compensated Poisson process, whose drift and diffusion coefficients as well as its jump intensity depend on unknown parameters. He obtained the LAN property of the model in the high frequency setting.

In this paper, we fill the gap and analyse continuously observed ergodic Ornstein–Uhlenbeck process driven by a Lévy process with heavy regularly varying tails of the index −α, α∈(0,2), in the presence of a Gaussian component. It turns out that the log-likelihood in this model is quadratic, however the model is not asymptotically normal and we prove only the local asymptotic mixed normality (LAMN) property. We refer to Le Cam and Yang (2000); Höpfner (2014) for the general theory of estimation for LAMN models.

The fact that the prelimiting log-likelihood is quadratic automatically implies that the maximum likelihood estimator is asymptotically efficient in the sense of Jeganathan’s convolution theorem and attains the local asymptotic minimax bound. Another feature of our model is that the asymptotic observed information has spectrally positive α/2-stable distribution. This implies that the limiting law of the maximum likelihood estimator has tails of the order exp(−xα) and hence finite moments of all orders.

2 Setting and the main result

Consider a stochastic basis (Ω,F,F,P), F being right-continuous. Let Z be a Lévy process with the characteristic triplet (σ2,b,ν) and the Lévy–Itô decomposition

For θ∈R, let X be an Ornstein–Uhlenbeck type process being a solution of the SDE

where θ∈R is an unknown parameter. The initial value X0∈F0

is a random variable whose distribution does not depend on

θ. Note that X has an explicit representation

In order to establish the equivalence of the laws PθT and Pθ0T, θ,θ0∈R, we have to make the following assumption.

Aσ: The Brownian component of Z is non-degenerate, i.e. σ>0.

and the likelihood ratio is given by

is the continuous local martingale component of ω under the measure Pθ0T, and the random measure

is defined by the jumps of ω.

Consider a family of statistical experiments

Our goal is to establish local asymptotic mixed normality (LAMN) of these experiments under the assumption that the process Z has heavy tails. We make the following assumption.

Aν: The Lévy measure ν has a regularly varying heavy tail of the order α∈(0,2), i.e.

We make use of the absolutely continuous strictly decreasing function ~H just for convenience in order to avoid technicalities connected with the inversion of càdlàg functions. For instance it holds φT∼(H←(1/T))−1 for the generalized inverse H←(R):=inf{u>0:H(u)>R}, see (Bingham et al., 1987, Chapter 1.5.7).

The main result is the LAMN property of our model.

Let Aσ and Aν hold true. Then the family of statistical experiments (2.10) is locally asymptotically mixed normal at each θ0>0, namely for each u∈R

Theorem 2.4 is based on the following key result.

Proposition 2.1 and Theorem 2.4 allow us to establish asymptotic distribution of the maximum likelihood estimator ^θT of θ. Moreover, the special form of the likelihood ratio guarantees that ^θT is asymptotically efficient.

The maximum likelihood estimator ^θT is asymptotically efficient in the sense of the convolution theorem and the local asymptotic minimax theorem for LAMN models, see (Höpfner, 2014, Theorems 7.10 and 7.12).

It is instructive determine the tails of the random variable N/√S(α/2): for each α∈(0,2)

The proof of all the results formulated above will be given in Section 4 after necessary preparations made in the next Section.

We decompose the Lévy process Z into a compound Poisson process with heavy jumps, and the rest. For definiteness, let for ρ≥0, RT=Tρ:[1,∞)→[1,∞) be a non-decreasing function.

For each T≥1, the process ηT is a compound Poisson process with intensity H(RT), the iid jumps {JTk}k≥1 occurring at arrival times {τTk}k≥1, such that

Denote also by NT the Poisson counting process of ηT; it is a Poisson process with intensity H(RT).

We decompose the Ornstein–Uhlenbeck process X into a sum

The following Lemma gives useful asymptotics of the truncated moments of the Lévy measure ν.

The next Lemma will be used to determine the tail behaviour of the product of any two independent normalized jumps |JTk||JTl|/R2T, k≠l.

be two independent random variables with the probability distribution function

A finer tail asymptotics of products of iid non-negative Pareto type random variables can be found in (Rosiński and Woyczyński, 1987, Theorem 2.1) and (Jessen and Mikosch, 2006, Lemma 4.1 (4)). In Lemma 3.2, however, we establish rather rough estimates which are valid for the families of iid random variables {UR,VR}R≥1.

The following useful Lemma will be used to determine the conditional distribution of the interarrival times of the compound Poisson process ηT.

where σk is a Beta(m,k−1)-distributed random variable with the density

samples from the population with uniform distribution on

Hence, the probability density of the difference τj+k−τj is obtained by integration w.r.t. v∈[0,1],

Recalling the definition of the Beta-function, we get

which yields the desired result. ∎

where S(α/2) is a spectrally positive α/2-stable random variable with the Laplace transform (2.20).

The Laplace transform of φ2T[ηT]T has the cumulant

and hence for each s≥0

The Ornstein–Uhlenbeck process XηT as well as its integral w.r.t. ηT can be written explicitly in the form of sums: