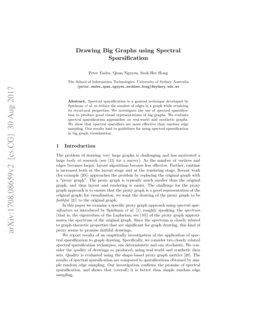 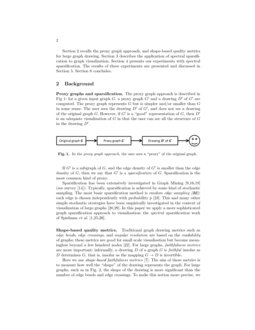 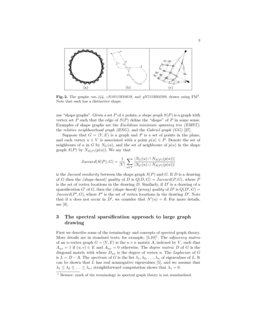 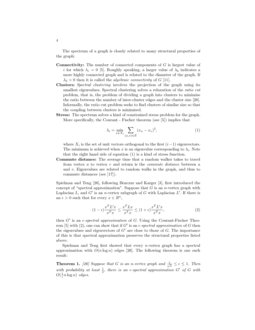 In this paper we examine a specific proxy graph approach using spectral sparsification as introduced by Spielman et al. [1]: roughly speaking, the spectrum

(that is, the eigenvalues of the Laplacian; see

[10]) of the proxy graph approximates the spectrum of the original graph. Since the spectrum is closely related to graph-theoretic properties that are significant for graph drawing, this kind of proxy seems to promise faithful drawings.

Sparsification has been extensively investigated in Graph Mining [9, 16, 19] (see survey [14]). Typically, sparsification is achieved by some kind of stochastic sampling. The most basic sparsification method is random edge sampling (RE)

: each edge is chosen independently with probability

p [23]. This and many other simple stochastic strategies have been empirically investigated in the context of visualization of large graphs [20, 29]. In this paper we apply a more sophisticated graph sparsification approach to visualization: the spectral sparsification work of Spielman et al. [1, 25, 26].

Traditional graph drawing metrics such as edge bends, edge crossings, and angular resolution are based on the readability of graphs; these metrics are good for small scale visualisation but become meaningless beyond a few hundred nodes [22]. For large graphs, faithfulness metrics are more important: informally, a drawing D of a graph G is faithful insofar as D determines G, that is, insofar as the mapping G→D is invertible.

Here we use shape-based faithfulness metrics [7]. The aim of these metrics is to measure how well the “shape” of the drawing represents the graph.

For large graphs, such as in Fig. 2, the shape of the drawing is more significant than the number of edge bends and edge crossings. To make this notion more precise, we use “shape graphs”. Given a set P of n points, a shape graph S(P) is a graph with vertex set P such that the edge of S(P) define the “shape” of P in some sense. Examples of shape graphs are the Euclidean minimum spanning tree (EMST), the relative neighbourhood graph (RNG), and the Gabriel graph (GG) [27].

First we describe some of the terminology and concepts of spectral graph theory. More details are in standard texts; for example, [5, 10]111Beware: much of the terminology in spectral graph theory is not standardised.. The adjacency matrix of an n-vertex graph G=(V,E) is the n×n matrix A, indexed by V, such that Auv=1 if (u,v)∈E and Auv=0 otherwise. The degree matrix D of G is the diagonal matrix with where Duu is the degree of vertex u. The Laplacian of G is L=D−A. The spectrum of G is the list λ1,λ2,…,λn of eigenvalues of L. It can be shown that L has real nonnegative eigenvalues [5], and we assume that λ1≤λ2≤…≤λn; straightforward computation shows that λ1=0.

The spectrum of a graph is closely related to many structural properties of the graph:

The number of connected components of G is largest value of i for which λi = 0 [5]. Roughly speaking, a larger value of λ2 indicates a more highly connected graph and is related to the diameter of the graph. If λ2>0 then it is called the algebraic connectivity of G [11].

involves the projection of the graph using its smallest eigenvalues. Spectral clustering solves a relaxation of the

ratio cut problem, that is, the problem of dividing a graph into clusters to minimise the ratio between the number of inter-cluster edges and the cluster size [28]. Informally, the ratio cut problem seeks to find clusters of similar size so that the coupling between clusters is minimised.
Stress:

The spectrum solves a kind of constrained stress problem for the graph. More specifically, the Courant - Fischer theorem (see [5]) implies that

is the set of unit vectors orthogonal to the first (

) eigenvectors. The minimum is achieved when

x is an eigenvalue corresponding to λi. Note that the right hand side of equation (1) is a kind of stress function.
Commute distance:

Spielman and Teng first showed that every n-vertex graph has a spectral approximation with O(nlogn) edges [26]. The following theorem is one such result:

[26] Suppose that G is an n-vertex graph and 1√n≤ϵ≤1. Then with probability at least 12, there is an ϵ-spectral approximation G′ of G with O(1ϵnlogn) edges.

Further research of Spielman et al. refines and improves spectral sparsification methods (see [1]). These results have potential for resolving scale issues in graph visualisation by reducing the size of the graph while retaining its (spectral) structure. However, the practical impact of these results for graph visualization is not clear, because of large constants involved.

The proof of Theorem 3.1 is essentially a stochastic sampling method, using the concept of “effective resistance”. Suppose that we regard a graph G=(V,E) as an electrical network where each edge is a 1-Ω resistor, and a current is applied. The voltage drop over an edge (u,v) is the effective resistance ruv of (u,v). Effective resistance in a graph is closely related to commute distance, and can be computed simply from the Moore-Penrose inverse [2] of the Laplacian. If L† is the Moore-Penrose inverse of L and (u,v)∈E, then ruv=L†uu + L†vv - 2 L†uv.

We next describe two graph drawing algorithms, both variants of algorithms of Spielman et al. [1]. Each takes a graph G and an integer m′, and computes a sparsification G′ with m′ edges, then draws G′.

In both DSS and SSS, the sparsified graph can be drawn with any large-graph layout algorithm.

We implemented DSS, SSS and RE in Java, on top of the OpenIMAJ toolkit [13]. In particular, we used OpenIMAJ to compute the Moore-Penrose inverse. The experiments were performed on a Dell XPS 13 laptop, with an i7 Processor, 16GB memory and 512GB SSD. The laptop was running Ubuntu 16.04 with 20GB swap memory. The computation of the Moore-Penrose inverse used Java 8, with a specified 16GB heap. We used multiple threads to speed up the resistance computation.

We used three data sets. The first set of graphs is taken from “defacto-benchmark” graphs, including the Hachul library, Walshaw’s Graph Partitioning Archive, the sparse matrices collection [6] and the network repository [24]. These include two types of graphs that have been extensively studied in graph drawing research: grid-like graphs and scale-free graphs. The second set is the GION data set [18]; this consists of RNA sequence graphs that are used for the analysis of repetitive sequences in sequencing data; these graphs have been used in previous experiments. They are locally dense and globally sparse, and generally have distinctive shapes. The third set consists of randomly generated graphs that contain interesting structures that are difficult to model with sparsification. Specifically, we generated a number of “black-hole graphs”, each of which consists of one or more large and dense parts (so-called “black holes”), and these parts connect with the rest of the graph by relatively few edges. These relatively few edges outside the “black holes” determine the structure of the graph. Such graphs are difficult to sparsify because sampling strategies tend to take edges from the dense “black holes” and miss the structurally important edges. Figs. 2(b) and (c) are black-hole graphs. Details of the graphs that we used are in Table 1.

For layout, we use the FM3 algorithm [12], as implemented in OGDF [4]. However, we also confirmed our results using FM3 variants (see Section 5.1).

5 Results from the experiments

First we describe typical examples of the results of our experiments, using the graphs illustrated in Fig. 2; these are a relatively small defacto-benchmark graph can_144, and two black-hole graphs cN1031M22638 and gN733M62509.

Fig. 6 shows the quality metrics for the three data sets for all three algorithms. The x-axis shows relative densities from 1% to 95%; the y-axis shows quality measures of the proxies.

We make the following five observations from the results.

Although the main purpose of our investigation was to evaluate the effectiveness of spectral sparsification, some remarks about runtime are in order.

This paper describes the first empirical study of the application of spectral sparsification in graph visualization.