One of the main challenges in high-speed mobile communications is the presence of large Doppler spreads. Thus, accurate estimation of maximum Doppler spread (MDS) plays an important role in improving the performance of the communication link. In this paper, we derive the data-aided (DA) and non-data-aided (NDA) Cramer-Rao lower bounds (CRLBs) and maximum likelihood estimators (MLEs) for the MDS in multiple-input multiple-output (MIMO) frequency-selective fading channel. Moreover, a lowcomplexity NDA-moment-based estimator (MBE) is proposed. The proposed NDA-MBE relies on the second- and fourth-order moments of the received signal, which are employed to estimate the normalized squared autocorrelation function of the fading channel. Then, the problem of MDS estimation is formulated as a non-linear regression problem, and the least-squares curvefitting optimization technique is applied to determine the estimate of the MDS. This is the first time in the literature when DAand NDA-MDS estimation is investigated for MIMO frequency-selective fading channel. Simulation results show that there is no significant performance gap between the derived NDA-MLE and NDA-CRLB even when the observation window is relatively small. Furthermore, the significant reduced-complexity in the NDA-MBE leads to low root-mean-square error (NRMSE) over a wide range of MDSs when the observation window is selected large enough. 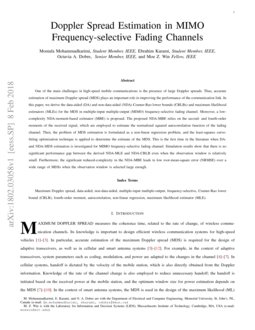 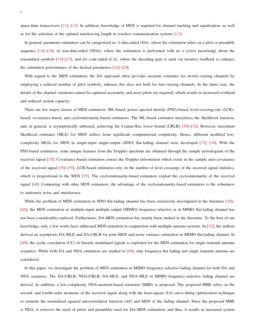 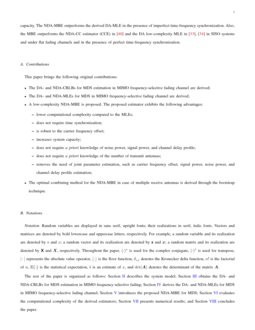 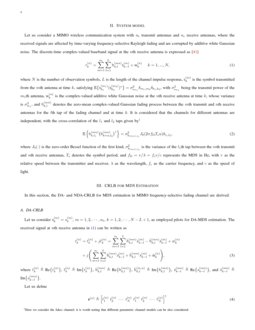 Maximum Doppler spread measures the coherence time, related to the rate of change, of wireless communication channels. Its knowledge is important to design efficient wireless communication systems for high-speed vehicles [1, 2, 3]. In particular, accurate estimation of the MDS is required for the design of adaptive transceivers, as well as in cellular and smart antenna systems [3, 4, 5, 6, 7, 8, 9, 10, 11, 12]. For example, in the context of adaptive transceivers, system parameters such as coding, modulation, and power are adapted to the changes in the channel [4, 5, 6, 7]. In cellular systems, handoff is dictated by the velocity of the mobile station, which is also directly obtained from the Doppler information. Knowledge of the rate of the channel change is also employed to reduce unnecessary handoff; the handoff is initiated based on the received power at the mobile station, and the optimum window size for power estimation depends on the MDS [7, 8, 9, 10]. In the context of smart antenna systems, the MDS is used in the design of the maximum likelihood (ML) space-time transceivers [11, 12]. In addition, knowledge of MDS is required for channel tracking and equalization, as well as for the selection of the optimal interleaving length in wireless communication systems [13].

With regard to the MDS estimation, the DA approach often provides accurate estimates for slowly-varying channels by employing a reduced number of pilot symbols, whereas this does not hold for fast-varying channels. In the latter case, the details of the channel variations cannot be captured accurately, and more pilots are required, which results in increased overhead and reduced system capacity.

While the problem of MDS estimation in SISO flat-fading channel has been extensively investigated in the literature [38, 33, 34, 31, 32, 37, 36, 30, 40, 35, 39], the MDS estimation in MIMO frequency-selective or in MIMO flat-fading channel has not been considerably explored. Furthermore, DA-MDS estimation has mainly been studied in the literature. To the best of our knowledge, only a few works have addressed MDS etimation in conjunction with multiple antenna systems. In [32], the authors derived an asymptotic DA-MLE and DA-CRLB for joint MDS

and noise variance estimation in

In this paper, we investigate the problem of MDS estimation in MIMO frequency-selective fading channel for both DA and NDA scenarios. The DA-CRLB, NDA-CRLB, DA-MLE, and NDA-MLE in MIMO frequency-selective fading channel are derived. In addition, a low-complexity NDA-MBE is proposed. The proposed MBE relies on the second- and fourth-order moments of the received signal along with the least-square (LS) curve-fitting optimization technique to estimate the normalized squared autocorrelation function (AF) and MDS of the fading channel. Since the proposed MBE is NDA, it removes the need of pilots and preambles used for DA-MDS estimation, and thus, it results in increased system capacity. The NDA-MBE outperforms the derived DA-MLE in the presence of imperfect time-frequency synchronization. Also, the MBE outperforms the NDA- estimator (CCE) in [40] and the DA low-complexity MLE in [33, 34] in SISO systems and under flat fading channels and in the presence of perfect time-frequency synchronization.

; a random matrix and its realization are denoted by

\mathsfbrX and X, respectively. Throughout the paper, (⋅)∗ is used for the complex conjugate, (⋅)† is used for transpose, |⋅| represents the absolute value operator, ⌊⋅⌋ is the floor function, δi,j denotes the Kronecker delta function, n! is the factorial of n, E{⋅} is the statistical expectation, ^\mathsfbrx is an estimate of x, and det(A) denotes the determinant of the matrix A.

Let us consider a MIMO wireless communication system with nt transmit antennas and nr receive antennas, where the received signals are affected by time-varying frequency-selective Rayleigh fading and are corrupted by additive white Gaussian noise. The discrete-time complex-valued baseband signal at the nth receive antenna is expressed as [41]

where N is the number of observation symbols, L is the length of the channel impulse response, \mathsfbrs(m)k is the symbol transmitted from the mth antenna at time k, satisfying E{\mathsfbrs(m1)k1(\mathsfbrs(m2)k2)∗}=σ2sm1δm1,m2δk1,k2, with σ2sm1 being the transmit power of the m1th antenna, \mathsfbrw(n)k is the complex-valued additive white Gaussian noise at the nth receive antenna at time k, whose variance is σ2wn, and \mathsfbrh(mn)k,l denotes the zero-mean complex-valued Gaussian fading process between the mth transmit and nth receive antennas for the lth tap of the fading channel and at time k. It is considered that the channels for different antennas are independent, with the cross-correlation of the l1 and l2 taps given by111Here we consider the Jakes channel; it is worth noting that different parametric channel models can be also considered.

where J0(⋅) is the zero-order Bessel function of the first kind, σ2h(mn),l1 is the variance of the l1th tap between the mth transmit and nth receive antennas, Ts denotes the symbol period, and represents the MDS in Hz, with v as the relative speed between the transmitter and receiver, λ as the wavelength, fc as the carrier frequency, and c as the speed of light.

In this section, the DA- and NDA-CRLB for MDS estimation in MIMO frequency-selective fading channel are derived.

The elements of the vector \mathsfbrr(n), n=1,2,⋯,nt, are linear combinations of the correlated Gaussian random variables as in (III-A). Thus, \mathsfbrr, is a Gaussian random vector with probability density function (PDF) given by

The Fisher information matrix of the parameter vector θ, I(θ), for the zero-mean Gaussian observation vector in (6) is obtained as

Finally, by employing (11), the DA-CRLB for MDS estimation in MIMO frequency-selective fading channel is obtained as

Let us consider that the symbols transmitted by each antenna are selected from a constellation with elements {c1 c2 ⋯ c|M|}, where 1|M|∑|M|i=1|ci|2=1. The PDF of the received vector \mathsfbrr for NDA-MDS estimation is expressed as

By employing the chain rule of probability and using

where c⟨i⟩ represents the ith possible constellation vector at the transmit-side.

Finally, by employing (17), the NDA-CRLB for MDS estimation in MIMO frequency-selective fading channel is expressed as

In this section, we derive the DA- and NDA-MLEs for MDS in MIMO frequency-selective fading channel.

The DA-MLE for fD is obtained as

By substituting (6) into (21) and after some mathematical manipulations, one obtains

Similar to the DA-MLE, the NDA-MLE for MDS is obtained from

By substituting (17) into (25) and after some algebra, one obtains

Similar to the DA-MLE, there is no closed-form solution for (IV-B); thus, numerical methods are used to solve (IV-B).

In this section, we propose an NDA-MB MDS estimator for multiple input single output (MISO) systems under frequency-selective Rayleigh fading channel by employing the fourth-order moment of the received signal. Then, an extension of the proposed estimator to the MIMO systems is provided.

Let us assume that the parameter vector φ=[β† ξ† ϑ† fD]† is unknown at the receive-side. The statistical MB approach enables us to propose an NDA-MBE to estimate fD without any priori knowledge of β, ξ, and ϑ. Let us consider the fourth-order two-conjugate moment of the received signal at the nth receive antenna, defined as

With the transmitted symbols, \mathsfbrs(m)k, m=1,...,nt being independent, drawn from symmetric complex-valued constellation points,333E{(\mathsfbrs(m)k)2}=0 for M-ary phase-shift-keying (PSK) and quadrature amplitude modulation (QAM), M>2 [44]. and with u≥L, κ(n)u is expressed as in (III-B) at the top of this page (see Appendix A for proof).

By employing the first-order autoregressive model of the Rayleigh fading channel, one can write

By using (29) and exploiting the property of a complex-valued Gaussian random variable \mathsfbrz∼Nc(0,σ2z) that E{|\mathsfbrz|2n}=n!σ2nz [47], one obtains