In this paper, domination in Signed Petri net(SPN) has been introduced.We identify some of the Petri net structures where a dominating set can exist.Applications of producer consumer problem, searching of food by bees and finding similarity in research papers are given to understand the areas where the proposed theory can be used. 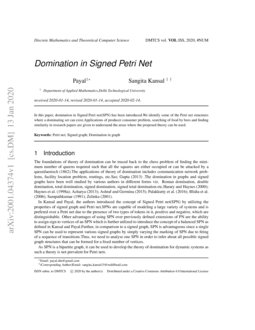 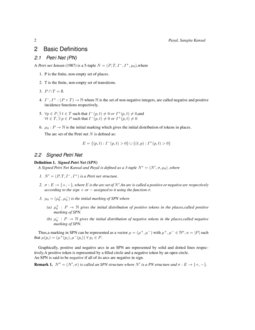 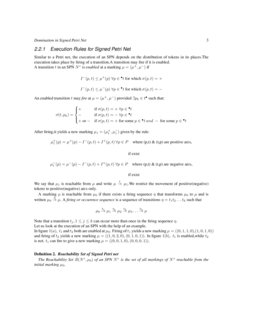 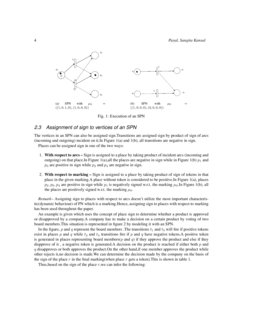 The foundations of theory of domination can be traced back to the chess problem of finding the minimum number of queens required such that all the squares are either occupied or can be attacked by a queenJaenisch (1862).The applications of theory of domination includes communication network problems, facility location problem, routings, etc.Sas ; Gupta (2013) .The domination in graphs and signed graphs have been well studied by various authors in different forms viz. Roman domination, double domination, total domination, signed domination, signed total domination etc.Harary and Haynes (2000); Haynes et al. (1998a); Acharya (2013); Ashraf and Germina (2015); Palakkutty et al. (2016); Blidia et al. (2006); Sampathkumar (1991); Zelinka (2001).

In Kansal and Payal , the authors introduced the concept of Signed Petri net(SPN) by utilizing the properties of signed graph and Petri net.SPNs are capable of modeling a large variety of systems and is prefered over a Petri net due to the presence of two types of tokens in it, positive and negative, which are distinguishable. Other advantages of using SPN over previously defined extensions of PN are the ability to assign sign to vertices of an SPN which is further utilized to introduce the concept of a balanced SPN as defined in Kansal and Payal .Further, in comparison to a signed graph, SPN is advantageous since a single SPN can be used to represent various signed graphs by simply varying the marking of SPN due to firing of a sequence of transitions.Thus, we need to analyse one SPN in order to infer about all possible signed graph structures that can be formed for a fixed number of vertices.

As SPN is a bipartite graph, it can be used to develop the theory of domination for dynamic systems as such a theory is not prevalent for Petri nets.

A Signed Petri Net Kansal and Payal is defined as a 3-tuple N∗=(N′,σ,μ0) ,where

Thus,a marking in SPN can be represented as a vector

Similar to a Petri net, the execution of an SPN depends on the distribution of tokens in its places.The execution takes place by firing of a transition.A transition may fire if it is enabled. A transition t in an SPN N∗ is enabled at a marking μ=(μ+,μ−) if

An enabled transition t may fire at μ=(μ+,μ−) provided ∃pk∈t∙ such that:

A marking μ is reachable from μ0 if there exists a firing sequence η that transforms μ0 to μ and is written μ0η→μ. A firing or occurence sequence is a sequence of transitions η=t1t2…tk such that

The Reachability Set R(N∗,μ0) of an SPN N∗ is the set of all markings of N∗ reachable from the initial marking μ0.

Places can be assigned sign in one of the two ways:

An example is given which uses the concept of place sign to determine whether a product is approved or disapproved by a company.A company has to make a decision on a certain product by voting of two board members.This situation is represented in figure 2 by modeling it with an SPN.

In the figure, p and q represent the board members .The transitions t1 and t3 will fire if positive tokens exist in places p and q while t2 and t4 transitions fire if p and q have negative tokens.A positive token is generated in places representing board members(p and q) if they approve the product and else if they dispprove of it , a negative token is generated.A decision on the product is reached if either both p and q disapproves or both approves the product.On the other hand,if one member approves the product while other rejects it,no decision is made.We can determine the decision made by the company on the basis of the sign of the place r in the final marking(when place r gets a token).This is shown in table 1.

Thus,based on the sign of the place r,we can infer the following:

If initially the places p and q in figure 2 have one positive and negative token respectively, then this situation corresponds to second row in table 1.Hence,the product will not be approved by the company.

In this section, we assume an ordinary SPN (without multiple arcs) unless stated otherwise.

A set D⊆V=PUT in an SPN N∗ is called a Dominating set with respect to a marking μ1∈R(N∗,μ0) if either all the vertices of V are in D or ∀ v∈V∖D

where S(v),S(u) are sign of vertices u,v with respect to marking μ1.

It may be noted that sign of a transition remains same irrespective of marking of the SPN while sign of a place may vary if the marking of SPN changes.

Dominating Set with respect to a set of markings(DM)

A dominating set DM with respect to a set of markings M in an SPN N∗ is called a dependent Dominating set if the markings of M are all the nodes of some subtree of the reachability tree of N∗.

For an SPN structure N′′ in which all the transitions are positively signed and each place has incident(input/output) arcs of one kind only, we can find a marking μ w.r.t. which V∖A is a dominating set where A is a set of source vertices.

If an SPN structure N′′ with no source/sink vertices and in which any place has only one type of incident arcs then, we can find a marking μ such that P and T are dominating sets w.r.t. μ, provided all the transitions are of same sign.

Since all the transitions are of same sign,two cases arise:

Thus, we get a marking μ w.r.t. which P and T are dominating sets.

The above theorem may be used in case of a disaster to check which transitions representing events in the system will dominate and hence may be used for preparedness against any disaster.

Theorems 1 and 2 given above show that:

We discuss applications of domination in SPN that can be utilized in various areas.

Consider, a standard Producer -Consumer Problem with two producers producing a same product (assuming quality,price and other conditions are same),we need to check whether one of the producer can dominate the market over the other.This can happen due to availability of product is greater for one producer as compared to other or because one product is well known due to its better marketing, etc. Consider an SPN model for the problem given in figure 3.

Choose D1=V∖{p7,t7}.Find if there exists a set of markings M(maximal) with marking μ∈M such that μ(p6)≠0 and D1 must be a dominating set w.r.t. M. Similarly, to check if producer 1 dominates the market we need to check domination of set D2 w.r.t. a set of markings where D2=V∖{p8,t7}.

Bees (Scout bees) go out in search of food.The one which find the food will return to the hive and celebrate.This scout bee can be considered to dominate other scout bees.This problem can be modeled using an SPN and then it can be identified which scout bee will dominate the bee-hive.Consider the figure 4 where place p1 represents the bee-hive while p2,p3 represent possible food locations where scout bees A and B respectively search for food.The transitions t2,t3 represent events of food search while t1,t4 represent events of food search completion.The positive tokens are used to represent bees and negative ones to represent food.

The model can be extended if more than two bees search for food.

4.3 Finding papers with similarity to a given paper using softwares like Turnitin

Consider a paper which need to be checked for similarity using a software.This paper is compared with web content that is publicly available, books, papers in journals, articles and other content which is present in a software database.Let the paper to be checked be represented by a place p0 and the rest of the content be represented by places p1,p2,p3,…pk.To check for similarity, an SPN model is formed by connecting place p0 to all other places via transitions t1,t2,t3,…tk and by using negative arcs as in figure 5.

While comparing paper p0 with another article represented by place pi (say),1≤i≤k, a matching algorithm is used to find a set of strings within submitted paper p0 that matches with the papers maintained in its database.If a similarity exists, a negative token is generated in place p0 which can be used to fire corresponding transition ti.In this way, the submitted paper is checked for similarity with all the content present in the database.After the comparisons are completed, we get a new marking for the SPN in which all the articles that have some similarity with the submitted paper get a negative token in the place representing it.All such places will form a list of articles that are similar to the paper submitted which is to be tested for similarity.