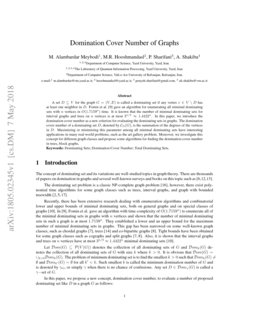 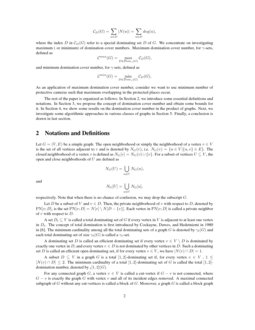 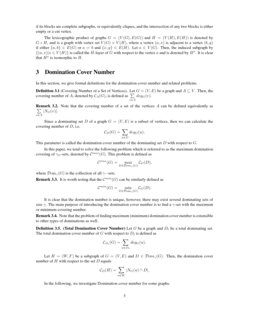 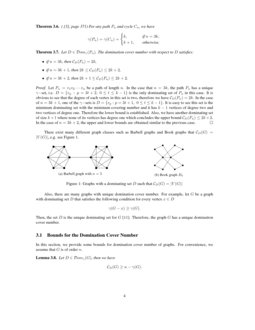 The concept of dominating set and its variations are well-studied topics in graph theory. There are thousands of papers on domination in graphs and several well-known surveys and books on this topic such as [13, 12, 6].

The dominating set problem is a classic NP-complete graph problem [16], however, there exist polynomial time algorithms for some graph classes such as trees, interval graphs, and graph with bounded treewidth [5, 2, 17].

In this paper, we propose a new concept, domination cover number, to evaluate a number of proposed dominating set like D in a graph G as follows:

and minimum domination cover number, for γ-sets, defined as

As an application of maximum domination cover number, consider we want to use minimum number of protective cameras such that maximum overlapping in the protected places occur.

respectively. Note that when there is no chance of confusion, we may drop the subscript G.

For any connected graph G, a vertex v∈V is called a cut-vertex if G−v is not connected, where G−v is exactly the graph G with vertex v and all of its incident edges removed. A maximal connected subgraph of G without any cut-vertices is called a block of G. Moreover, a graph G is called a block graph if its blocks are complete subgraphs, or equivalently cliques, and the intersection of any two blocks is either empty or a cut vertex.

In this section, we give formal definitions for the domination cover number and related problems.

Definition 3.1 (Covering Number of a Set of Vertices).

Note that the covering number of a set of the vertices A can be defined equivalently as ∑v∈A|NG(v)|.

Since a dominating set D of a graph G=(V,E) is a subset of vertices, then we can calculate the covering number of D, i.e.

This parameter is called the domination cover number of the dominating set D with respect to G.

In this paper, we tend to solve the following problem which is referred to as the maximum domination covering of γG-sets, denoted by Cmax(G). This problem is defined as

It is clear that the domination number is unique, however, there may exist several dominating sets of size γ. The main purpose of introducing the domination cover number is to find a γ-set with the maximum or minimum covering number.

Note that the problem of finding maximum (minimum) domination cover number is extensible to other types of dominations as well.

(Total Domination Cover Number) Let G be a graph and Dt be a total dominating set. The total domination cover number of G with respect to Dt is defined as

Let H=(W,F) be a subgraph of G=(V,E) and D∈Domγ(G). Then, the domination cover number of H with respect to the set D equals

In the following, we investigate Domination cover number for some graphs.

Let Pn=v1v2⋯vn be a path of length n. In the case that n=3k, the path Pn has a unique γ−set, i.e. D={vp:p=3t+2,0≤t≤k−1} is the only dominating set of Pn in this case. It is obvious to see that the degree of each vertex in this set is two, therefore we have CD(Pn)=2k. In the case of n=3k+1, one of the γ−sets is D={vp:p=3t+1,0≤t≤k−1}. It is easy to see this set is the minimum dominating set with the minimum covering number and it has k−1 vertices of degree two and two vertices of degree one. Therefore the lower bound is established. Also, we have another dominating set of size k+1 where none of its vertices has degree one which concludes the upper bound CD(Pn)≤2k+2. In the case of n=3k+2, the upper and lower bounds are obtained similar to the previous case. ∎

There exist many different graph classes such as Barbell graphs and Book graphs that CD(G)=|V(G)|, e.g. see Figure 1.

Also, there are many graphs with unique domination cover number. For example, let G be a graph with dominating set D that satisfies the following condition for every vertex x∈D

3.1 Bounds for the Domination Cover Number

In this section, we provide some bounds for domination cover number of graphs. For convenience, we assume that G is of order n.

Let D∈Domγ(G), then we have

If G has an efficient dominating set, then

Let D∈Domγ(G), then the domination cover number of G is bounded as

and these bounds are sharp, in the sense that there exist graphs satisfying the equalities for infinitely many values of n.

Since γ(G)≤⌊n2⌋, so the upper bound is established.

Next, we prove that these bounds are sharp. Let H be a graph with n=2p vertices which is constructed from base Kp by adding an extra vertex adjacent to each vertex in Kp. This graph is called a corona graph. It is clear that γ(H)=p, so if the dominating set contains one-degree vertices, then CD(H)=⌈n2⌉=p and if the dominating set contains vertices of Kp, then CD(H)=⌈n2⌉2=p2. ∎

A graph G is called P4-free, if G does not contain an induced subgraph P4. In the next theorem, we establish bounds for domination cover number of P4-free graphs. These graphs are also known as cographs.

Let G be a P4−free graph with n vertices and D∈Domγ(G). Then, we have

The lower bound is resulted by Lemma 3.8. In [4, 15], it is shown that in P4−free graphs we have γ(G)=γt[1,2], i.e. domination number is equal to total [1,2] domination number of graph. So every vertex is dominated at most twice. But according the definition of total [1,2]- domination every v∈D can be connected to at most one other vertex in D, So we reduce the size dominating set from 2n.

In this section, we investigate domination cover number for the lexicographic product of graphs G and H.

The minimum and maximum domination cover number of lexicographic product of G and H are as follows:

To prove Theorem 4.1, we need the following lemmas.

It is sufficient to show the following statements:

Let S be a γ-set for G such that γt(G)=2γ(G). Then, the set S is an independent dominating set.

We prove this lemma by contradiction. Let there exist at least two vertices g,g′∈S such that {g,g′}∈E(G). For constructing total dominating set S′, it is enough to put vertices g and g′ in the set S′ and for the rest of the vertices in S like v, we put v and one of its neighbor in S′. As a result, we obtain a total dominating set for G such that it has cardinality of at most 2(γ(G)−2))+2=2γ(G)−2 which is a contradiction. ∎

Now, we have all of requirement to do the proof of Theorem 4.1.

We have just proved that Cmin(G∘H). The proof for Cmax(G∘H) is similar. According to the definition of domination cover number, we have

There are three cases to consider:

In this case, we have two types of dominating sets for G∘H:

In this case, Cmin(G∘H) is the minimum value of the above types. ∎

In this section, we use the dynamic programing approach to find the domination cover number of certain classes of graphs.

We first choose an arbitrary vertex of T and consider it as a root. So, from now, we can think of T as a rooted tree. For each vertex v of T, we define the following notation :

We are going to devise a linear time algorithm based on a bottom-up dynamic programming technique to calculate the above notation for all of the vertices. To calculate these values for each vertex, we assume that similar values have been already computed for all of the descendants of the current vertex. This is a valid assumption since we process the vertices of T in post-order. For convenience, we use black and white colorings for the vertices to denote whether they are in the domination or not, respectively.

A vertex v is called a leaf if it has no children. If v is a leaf of T, then Tv consists only of v and therefore, we set m+[v]=1 and m−[v]=∞, since there exists no dominating set for Tv that does not contain v.

Since we are concerned with m−[v] when v is not a leaf, we have the assumption that v is white. Therefore, at least one of its children must be black. Moreover, v has no effect on how one colors the subtrees Tu for u∈ch(v). We consider all of the possible valid bi-colorings and choose one of the yielding numbers of black vertices with at least value of Tv as follows:

At least one of the children of v must be in the dominating set. So, we construct the set A which consists of all children of v like w, which satisfy m+[w]−m−[w]≤0 and B is assumed as the set of all of children v satisfying m+[w]−m−[w]=0. Now, we solve the following equation

Note that in the above equation, at least one of the children of v must be chosen. If A is empty, then we select a vertex from B which has the maximum value of Max+. Moreover, if B is empty, we select the vertex w in ch(v) such that, m−[w]−m+[w] is minimum.

The value of Max−[v] is calculated as

and similarly, the value of Min−[v] is calculated as

In this case, the vertex v is black and all of the children of v have a black neighbor and there is no restriction about the color of its children, i.e. each child of V can be either white or black. The value of m+[v] is calculated as

and to find the value of Max+[v], we consider all of the selected children of v in the above equation as the set A, i.e.

Similarly, for Min+[v] we have

The time complexity of calculating all of these equations is O(deg(v)).

With little changes in the above algorithm, we can find a dominating set for a subtree of T with maximum or minimum domination cover number.

Let G be a block graph and T be its corresponding cut-tree. We set the following notation:

In the post order traversal of T, for each non leaf vertex like v, we define the following sets:

Next, we consider the following cases: