Visual object tracking is a fundamental task in the field of computer vision. Recently, Siamese trackers have achieved state-of-the-art performance on recent benchmarks. However, Siamese trackers do not fully utilize semantic and objectness information from pre-trained networks that have been trained on the image classification task. Furthermore, the pre-trained Siamese architecture is sparsely activated by the category label which leads to unnecessary calculations and overfitting. In this paper, we propose to learn a Domain-Aware, that is fully utilizing semantic and objectness information while producing a class-agnostic using a ridge regression network. Moreover, to reduce the sparsity problem, we solve the ridge regression problem with a differentiable weighted-dynamic loss function. Our tracker, dubbed DomainSiam, improves the feature learning in the training phase and generalization capability to other domains. Extensive experiments are performed on five tracking benchmarks including OTB2013 and OTB2015 for a validation set; as well as the VOT2017, VOT2018, LaSOT, TrackingNet, and GOT10k for a testing set. DomainSiam achieves state-of-the-art performance on these benchmarks while running at 53 FPS. 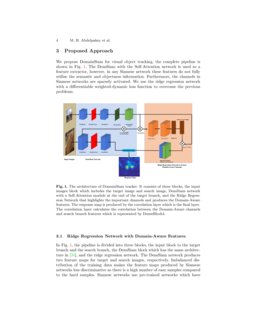 Domain Adaptive SiamRPN++ for Object Tracking in the Wild

Tracking is a fundamental task in many computer vision tasks such as surveillance [18], computer interactions [31] and image understanding [22]. The objective of tracking is to find the trajectory of the object of interest over time. This is a challenge since the object of interest undergoes appearance changes such as occlusions, motion blur, and background cluttering [44, 1]. Recent deep trackers such as CFNet [40] and DeepSRDCF [10] use pre-trained networks which have been trained on image classification or object recognition.

[32], SRDCF [11], KCF [16] and SAMF [27]). Siamese trackers such as SiamFC [4], CFNet [40], SiamRPN [23], and DensSiam [30] learn a similarity function to separate the foreground from its background. However, Siamese trackers do not fully utilize the semantic and objectness information from pre-trained networks that have been trained on image classification. In image classification, the class categories of the objects are pre-defined while in object tracking task the tracker needs to be class-agnostic while benefiting from semantic and objectness information. Moreover, the image classification increases the inter-class differences while forcing the features to be insensitive to intra-class changes [26].

In this paper, we propose DomainSiam to learn Domain-Aware, that is fully utilizing semantic and objectness information from a pre-trained network. DomainSiam consists of the DensSiam with a self-attention module [30] as a backbone network and a regression network to select the most discriminative convolutuinal filters to leverage the semantic and objectness information. Moreover, we develop a differentiable weighted-dynamic domain loss function to train the regression network. The developed loss function is monotonic, dynamic, and smooth with respect to its hyper-parameter, which can be reduced to l1 or l2 during the training phase. On the other hand, the shrinkage loss function [28] is static and it can not be adapted during the training phase. Most regression networks solve the regression problem with static loss such as the closed-form solution if the input to the network is not high-dimensional or minimizing l2. The results will be made available 111https://vip-mun.github.io/DomainSiam. To summarize, the main contributions of this paper are three-fold.

The rest of the paper is organized as follows. Related work is presented in section 2. Section 3 details the proposed approach. We present the experimental results in Section 4. Finally, section 5 concludes the paper.

Recently, Siamese-based trackers have received significant attention especially in realtime tracking. In this section, we firstly introduce the state-of-the-art Siamese-based trackers. Then, we briefly introduce the gradient-based localization guidance. Siamese-based Trackers The first Siamese network was first proposed in [6] for signature verification. In general, Siamese network consists of two branches the target branch and the search branch; both branches share the same parameters. The score map which indicates the position of the object of interest is generated by the last cross-correlation layer. The pioneering work of using Siamese in object tracking is SiamFC [4]. SiamFC searches the target image in the search image. Siamese Instance Search [39] proposed SINT, which has the query branch and the search branch, the backbone of this architecture is inherited from AlexNet [21]. CFNet [40] improved SiamFC by adding a correlation layer to the target branch. SA-Siam [15] proposed two Siamese networks, the first network encodes the semantic information and the second network encodes the appearance model, which is different from our architecture that has only one Siamese network. SiamRPN [24] formulated the tracking problem as a local one-shot detection. SiamRPN consists of a Siamese network as a feature extractor and a region proposal network which includes the classification branch and regression branch. DensSiam [30]

used the Densely-Siamese architecture to make the Siamese network deeper while maintaining the performance of the network. DensSiam allows the low-level and high-level features to flow within layers without vanishing gradients problem. Moreover, a self-attention mechanism was integrated to force the network to capture the non-local features. SiamMask

proposed the Siamese network with explicit components for target estimation and classification. The component is trained offline to maximize the overlapping between the estimated bounding box and the target. Most Siamese trackers do not fully utilize the semantic and ojectness information from pre-trained networks.

Gradient-based Localization Guidance In this category of learning, the objective is to determine the most important channel of the network with respect to the object category. In an object classification task, each category activates a set of certain channels. Grad-CAM [37]

used a gradient of any target logit (e.g., ”cat”) and using this gradient, determined the active category channel for this logit. The work in

[46] demonstrated that the global average pooling of the gradients is implicitly acting as Attention for the network; consequently, it can locate the object of interest accurately.

We propose DomainSiam for visual object tracking, the complete pipeline is shown in Fig. 1. The DensSiam with the Self-Attention network is used as a feature extractor, however, in any Siamese network these features do not fully utilize the semantic and objectness information. Furthermore, the channels in Siamese networks are sparsely activated. We use the ridge regression network with a differentiable weighted-dynamic loss function to overcome the previous problems.

In Fig. 1, the pipeline is divided into three blocks, the input block to the target branch and the search branch, the DensSiam block which has the same architecture in [30], and the ridge regression network. The DensSiam network produces two feature maps for target and search images, respectively. Imbalanced distribution of the training data makes the feature maps produced by Siamese networks less discriminative as there is a high number of easy samples compared to the hard samples. Siamese networks use pre-trained networks which have been trained on other tasks (e.g., classification and recognition). These networks increase inter-class differences and is also insensitive to intra-class variations. Consequently, this property decreases the performance of Siamese networks as the tracker needs to be more discriminative to the same object category. Moreover, the pre-trained network is sparsely activated by the object category. In other words, in the feature channels/maps there are only a few active channels that correspond to the object category. The regression network in Fig. 1 highlights the importance of each channel in the feature map to the object of interest and discards the others. In Fig. 1, the ridge regression network regresses all samples in the input image patch to their soft labels by optimizing the following objective function.

Where ∥∗∥ denotes the convolution operation, W is the weight of the regression network, X∈RN×D is the input features and Y∈RN×D

is the soft label. Gaussian distribution is used as a soft label map and its centre is aligned to the target center and

λ>0 is the regularization parameter.

Where (i,j) is the location corresponding to the target location and σ is the Gaussian kernel width. The closed-form analytic solution for equation 1 is defined as

The optimal solution of W can be achieved by equation 3; however, solving this equation is computationally expensive as X⊤X∈RD×D. Instead, we use the ridge regression network with the proposed loss function to solve equation 1.

1, in the last block, the Domain-Aware feature space is calculated by

We propose a differentiable weighted-dynamic loss function for visual object tracking to solve equation 5, inspired by [2]

where a∈[0,1] is a hyper-parameter, y is the regression target of a sample, and α∈R is the parameter that controls the robustness of the loss. The exponent term in this loss function tackles the imbalanced distribution of the training set by assigning a higher weight to hard samples. The imbalanced data occurs when the number of easy samples (background) is extremely higher than the hard samples (foreground). The advantage of this loss function over equation 1 and equation 3 is it can automatically adjust the robustness during the training phase. This advantage comes from the α parameter. For example, at α=2 the equation 6 becomes L2

As noticed before that the proposed loss function is dynamic, this allows the network to also learn a robust representation. The gradient of the equation 6 with respect to α is always positive. Consequently, this property makes the loss monotonic with respect to α and useful for non-convex optimization.

The final proposed loss function is given by

Fig. 2 shows that the optimization over the proposed loss function achieves faster convergence speed, while in Shrinkage loss function that is proposed in [28] and the original ridge regression loss function 1 (l2), the convergence speed is slower. The importance of each channel in the feature map is calculated by plugging equation 11 into equation 4. It is worth mentioning that the output feature map of the ridge regression network contains only the activated channels that have the most semantic and objectnes information corresponding to the object category. The Domain-Aware features and the feature channels from denseBlock4 are fed into the correlation layer to calculate the similarity and produce the response map.

The benchmarks are divided into two categories, the validation set including OTB2013 [43] and OTB2015 [44], and the testing set including VOT2017 [20], VOT2018 [19], and GOT10k [17]. We introduce the implementation details in the next sub-section and then we compare the proposed tracker to the state-of-the-art trackers.

. ILSVRC15 has over 4000 sequences with approximately 1.3 million frames with their labels. The DomainSiam, which has been trained on 1000 classes, can benefit from this class diversity. We implemented DomainSiam in Python using PyTorch framework

[35]. Experiments are performed on Linux with a Xeon E5 @2.20 GHz CPU and a Titan XP GPU. Testing speed of DomainSiam is 53 FPS which is beyond realtime speed. Training

. The ridge regression network is trained with its proposed loss function separately from the Siamese network with 70 epochs. The highest scores associated with 100 channels are selected as the Domain-Aware features. The training is applied with a momentum of 0.9, the batch size of 8 images, and the learning rate is annealed geometrically at each epoch from

4.2 Comparison with the State-of-the-Arts