We focus on multi-turn response selection in a retrieval-based dialog system. In this paper, we utilize the powerful pre-trained language model Bi-directional Encoder Representations from Transformer (BERT) for a multi-turn dialog system and propose a highly effective post-training method on domain-specific corpus. Although BERT is easily adopted to various NLP tasks and outperforms previous baselines of each task, it still has limitations if a task corpus is too focused on a certain domain. Post-training on domain-specific corpus (e.g., Ubuntu Corpus) helps the model to train contextualized representations and words that do not appear in general corpus (e.g.,English Wikipedia). Experiment results show that our approach achieves new state-of-the-art on two response selection benchmark datasets (i.e.,Ubuntu Corpus V1, Advising Corpus) performance improvement by 5.9 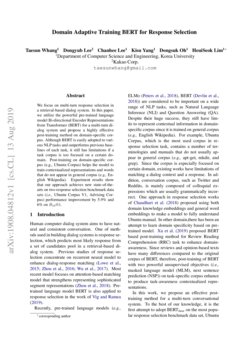 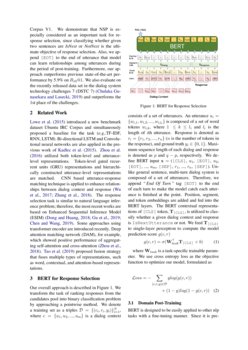 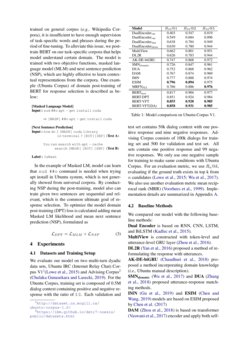 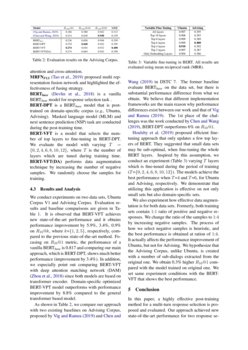 TourBERT: A pretrained language model for the tourism industry

Does Dialog Length matter for Next Response Selection task? An Empirical Study

In the last few years, the release of BERT, a multilingual transformer b...
Jatin Ganhotra, et al. ∙

This paper presents results of our experiments for the next utterance ra...
Rudolf Kadlec, et al. ∙

Building systems that can communicate with humans is a core problem in A...
Debanjan Chaudhuri, et al. ∙

Human computer dialog system aims to have natural and consistent conversation. One of methods used in building dialog systems is response selection, which predicts most likely response from a set of candidates pool in a retrieval-based dialog system. Previous studies of response selection concentrate on recurrent neural model to enhance dialog-response matching Lowe et al. (2015); Zhou et al. (2016); Wu et al. (2017). Most recent model focuses on attention-based matching model that strengthens representing sophisticated segment representations Zhou et al. (2018). Pre-trained language model BERT is also applied to response selection in the work of Vig and Ramea (2019). Recently, pre-trained language models (e.g., ELMo Peters et al. (2018), BERT Devlin et al. (2018)) are considered to be important on a wide range of NLP tasks, such as Natural Language Inference (NLI) and Question Answering (QA). Despite their huge success, they still have limits to represent contextual information in domain-specific corpus since it is trained on general corpus (e.g., English Wikipedia). For example, Ubuntu Corpus, which is the most used corpus in response selection task, contains a number of terminologies and manuals that do not usually appear in general corpus (e.g., apt-get, mkdir, and grep). Since the corpus is especially focused on certain domain, existing works have limitations of matching a dialog context and a response. In addition, conversation corpus, such as Twitter and Reddits, is mainly composed of colloquial expressions which are usually grammatically incorrect. One approach in response selection works of Chaudhuri et al. (2018) proposed using both domain knowledge embeddings and general word embeddings to make a model to fully understand Ubuntu manual. In other domain,there has been an attempt to learn domain specificity based on pre-trained model. Xu et al. (2019) proposed BERT based post-training method for Review Reading Comprehension (RRC) task to enhance domain-awareness. Since reviews and opinion-based texts have many differences compared to the original corpus of BERT, therefore, post-training of BERT with two powerful unsupervised objectives (i.e., masked language model (MLM), next sentence prediction (NSP)) on task-specific corpus enhance to produce task-awareness contextualized representations. In this work, we propose an effective post-training method for a multi-turn conversational system. To the best of our knowledge, it is the first attempt to adopt BERTbase

IsNext or NotNext is the ultimate objective of response selection. Also, we append [EOT] to the end of utterance that model can learn relationships among utterances during the period of post-training. Furthermore, our approach outperforms previous state-of-the-art performance by 5.9% on R10@1. We also evaluate on the recently released data set in the dialog system technology challenges 7 (DSTC 7) Lasecki (2019) and outperforms the 1st place of the challenges.

Our overall approach is described in Figure 1. We transform the task of ranking responses from the candidates pool into binary classification problem by approaching a pointwise method. We denote a training set as a triples D={(ci,ri,yi)}Ni=1, where c={u1,u2,...,um} is a dialog context consists of a set of utterances. An utterance ui={wi,1,wi,2,...,wi,li} is composed of a set of word tokens wi,k, where 1≤ k ≤ li and li is the length of ith utterance. Response is denoted as ri={r1,r2,...,rn} (n is the number of tokens in the response), and ground truth yi∈{0,1}. Maximum sequence length of each dialog and response is denoted as p and q−p, respectively. We define BERT input x = ([CLS], u1, [EOT], u2, [EOT], …, um, [SEP], r1, …, rn, [SEP]). Unlike general sentence, multi-turn dialog system is composed of a set of utterances. Therefore, we append “ End Of Turn ” tag [EOT] to the end of each turn to make the model catch each utterance is finished at the point. Position, segment, and token embeddings are added and fed into the BERT layers. The BERT contextual representations of [CLS] token, T[CLS], is utilized to classify whether a given dialog context and response is IsNextUtterance or not. We feed T[CLS]

to single-layer perceptron to compute the model prediction score

where Wtask is a task-specific trainable parameter. We use cross entropy loss as the objective function to optimize our model, formulated as

BERT is designed to be easily applied to other nlp tasks with a fine-tuning manner. Since it is pre-trained on general corpus (e.g., Wikipedia Corpora), it is insufficient to have enough supervision of task-specific words and phrases during the period of fine-tuning. To alleviate this issue, we post-train BERT on our task-specific corpora that helps model understand certain domain. The model is trained with two objective functions, masked language model (MLM) and next sentence prediction (NSP), which are highly effective to learn contextual representations from the corpora. One example (Ubuntu Corpus) of domain post-training of BERT for response selection is described as below:

In the example of Masked LM, model can learn that sud  ##o command is needed when trying apt install in Ubuntu system, which is not generally showed from universal corpora. By conducting NSP during the post-training, model also can train given two sentences are sequential and relevant, which is the common ultimate goal of response selection. To optimize the model domain post-training (DPT) loss is calculated adding mean Masked LM likelihood and mean next sentence prediction (NSP), formulated as

Rn@k, evaluating if the ground truth exists in top k from n candidates Lowe et al. (2015); Wu et al. (2017). We also use another evaluation metric mean reciprocal rank (MRR) Voorhees and others (1999). Implementation details are summarized in Appendix A.

We compared our model with the following baseline methods: Dual Encoder is based on RNN, CNN, LSTM, and BiLSTM Kadlec et al. (2015). MultiView is constructed with token-level and utterance-level GRU layer Zhou et al. (2016). DL2R Yan et al. (2016) proposed a method of reformulating the response with utterances. AK-DE-biGRU Chaudhuri et al. (2018) proposed a method incorporating domain knowledge (i.e., Ubuntu manual description). SMNdynamic Wu et al. (2017) and DUA Zhang et al. (2018) proposed utterance-response matching methods. IMN Gu et al. (2019) and ESIM Chen and Wang (2019) models are based on ESIM proposed by Chen et al. (2017) DAM Zhou et al. (2018) is based on transformer Vaswani et al. (2017) encoder and apply both self-attention and cross-attention. MRFNFLS Tao et al. (2019) proposed multi representation fusion network and highlighted the effectiveness of fusing strategy. BERTbase Devlin et al. (2018) is a vanilla BERTbase model for response selection task . BERT-DPT is a BERTbase model that is post-trained on domain-specific corpus (e.g., Ubuntu, Advising). Masked language model (MLM) and next sentence prediction (NSP) task are conducted during the post-training time. BERT-VFT is a model that selects the number of top layers to fine-tuning in BERT-DPT. We evaluate the model with varying T={0,2,4,6,8,10,12}, where T is the number of layers which are tuned during training time. BERT-VFT(DA) performs data augmentation technique by increasing the number of negative samples. We randomly choose the samples for training.

We conduct experiments on two data sets, Ubuntu Corpus V1 and Advising Corpus. Evaluation results and baseline comparisons are given in Table 1. It is observed that BERT-VFT achieves new state-of-the-art performance and it obtains performance improvement by 5.9%, 3.4%, 0.9% on R10@k, where k={1,2,5}, respectively, compared to the previous state-of-the-art method. Focusing on R10@1 metric, the performance of a vanilla BERTbase is 0.817 and comparing our main approach, which is BERT-DPT, shows much better performance (improvement by 3.4%). In addition, we especially point out comparing BERT-VFT with deep attention matching network (DAM) Zhou et al. (2018) since both models are based on transformer encoder. Domain-specific optimized BERT-VPT model outperforms with performance improvement by 8.8% compared to the general transformer based model.

As shown in Table 2, we compare our approach with two existing baselines on Advising Corpus, proposed by Vig and Ramea (2019) and Chen and Wang (2019) in DSTC 7. The former baseline evaluate BERTbase on the data set, but there is substantial performance difference from what we obtain. We believe that different implementation frameworks are the main reason why performance differences exist between our work and that of Vig and Ramea (2019). The 1st place of the challenges was the work conducted by Chen and Wang (2019), BERT-DPT outperforms 6% on R10@1.

Houlsby et al. (2019) proposed efficient fine-tuning approach that only updates a few top layers of BERT. They suggested that small data sets may be sub-optimal, when fine-tuning the whole BERT layers. Inspired by this assumption, we conduct an experiment (Table 3) varying T layers which is fine-tuned during the period of training (T={0,2,4,6,8,10,12}). The models achieve the best performance when T=4 and T=6, for Ubuntu and Advising, respectively. We demonstrate that utilizing this application is effective on not only small sets but also domain-specific sets. We also experiment how effective data augmentation is for both data sets. Formerly, both training sets contain 1:1 ratio of positive and negative responses. We change the ratio of the samples to 1:4

1:4. It actually affects the performance improvement of Ubuntu, but not for Advising. We hypothesize that the Advising Corpus, unlike Ubuntu, is created with a number of sub-dialogs extracted from the original one. We obtain 0.3% higher R10@1 compared with the model trained on original one. We set same experiment conditions with the BERT-VFT that shows the best performance.

The models are implemented using the Tensorflow library Abadi et al. (2016). We use the Uncased BERTbase model333https://github.com/google-research/bert as a base code for our experiments. The batch size is set to 32 and the maximum sequence length is set to 320, specifically 280 for a dialog context and 40 for a response. We post-train the model more on Ubuntu Corpus V1 and Advising Corpus, 200,000 steps and 100,000 steps, respectively. The model is optimized using Adam weight decay optimizer with learning rate of 3e-5.