Object detection and classification for aircraft are the most important tasks in the satellite image analysis. The success of modern detection and classification methods has been based on machine learning and deep learning. One of the key requirements for those learning processes is huge data to train. However, there is an insufficient portion of aircraft since the targets are on military action and oper- ation. Considering the characteristics of satellite imagery, this paper attempts to provide a framework of the simulated and unsupervised methodology without any additional su- pervision or physical assumptions. Finally, the qualitative and quantitative analysis revealed a potential to replenish insufficient data for machine learning platform for satellite image analysis. 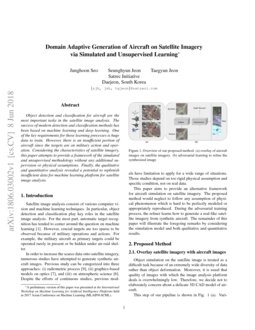 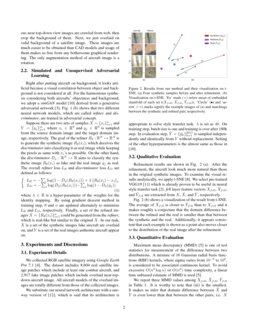 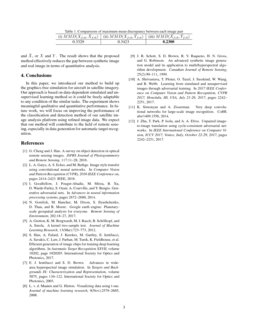 [1]. However, crucial targets are too sparse to be observed because of military operations and actions. For example, the military aircraft as primary targets could be operated rarely in present or be hidden under air-raid shelter.

In order to increase the scarce data onto satellite imagery, numerous studies have attempted to generate synthetic aircraft images. Previous study can be categorized into three approaches: (i) radiometric process [9], (ii) graphics-based models on optics [7], and (iii) on atmospheric science [6]. Despite the efforts of continuous studies, previous models have limitation to apply for a wide range of situations. Those studies depend on too rigid physical assumption and specific condition, not on real data.

This paper aims to provide an alternative framework for aircraft simulation on satellite imagery. The proposed method would neglect to follow any assumption of physical phenomenon which is hard to be perfectly modeled or appropriately reproduced. During the adversarial training process, the refiner learns how to generate a real-like satellite imagery from synthetic aircraft. The remainder of this paper will illustrate the foregoing remarks by considering the simulation model and both qualitative and quantitative results.

Object simulation on the satellite image is treated as a difficult task because of an extremely wide diversity of data rather than object deformation. Moreover, it is usual that quality of images with which the image analysis platform deals is overwhelmingly low. Therefore, we decide not to elaborately concern about a delicate 3D CAD model of aircraft.

This step of our pipeline is shown in Fig. 1 (a). Various near-top-down view images are crawled from web, then crop the background of them. Next, we just overlaid on valid background of a satellite image. These images are much easier to be obtained than CAD models and usage of them makes us free from any bothersome graphical rendering. The only augmentation method of aircraft image is a rotation.

Right after putting aircraft on background, it looks artificial because a visual correlation between object and background is not considered at all. For the harmonious synthesis considering both aircrafts’ objectness and background, we adopt a simGAN model [10] derived from a generative adversarial network [3]. Fig. 1

(b) shows that two different neural network models, which are called

refiner and discriminator, are trained in adversarial concept.

Suppose there are two sets of samples X={xi}ni=1 and Y={yj}mj=1 where xi∈RN and yj∈RN is sampled from the source domain image and the target domain image, respectively. The goal of the refiner Rθ:RN↦RN is to generate the synthetic image Rθ(xi), which deceives the discriminator

xi’s as possible. On the other hand, the discriminator Dϕ:RN↦R aims to classify the synthetic image Rθ(xi) as fake and the real image yj as real. The overall refiner loss LR and discriminator loss LD are defined as follows:

where λ∈R is a hyper-parameter of the weights for the identity mapping. By using gradient descent method in training step, θ and ϕ are updated alternately to minimize LR and LD, respectively. Finally, a set of the refined images ^X={Rθ(xi)}ni=1 could be generated from the refiner, which is real-like but similar to the original X. In our task, X is a set of the synthetic images fake aircraft are overlaid on, and Y is a set of the real images authentic aircraft appear on.

We collected RGB satellite imagery using Google Earth Pro 7.1 [4]. The dataset includes 8,604 real satellite image patches which include at least one combat aircraft, and 2,917 fake image patches which include overlaid near-top-down aircraft image. All aircraft models of the overlaid images are totally different from those of the collected images.

We substitute our neural network architecture with a one-way version of [12], which is said that its architecture is appropriate to solve style transfer task. λ is set as 40. On training step, batch size is one and training is over after 180k step. In evaluation step, ~Y={~yk}2917k=1 is sampled independently and identically from Y

without replacement. Setting of the other hyperparameters is the almost same as those in

Refinement results are shown in Fig. 2 (a). After the refinement, the aircraft look much more natural than those in the original synthetic images. To examine the visual results analytically, we apply t-SNE [8]. We select pre-trained VGG19 [11] which is already proven to be useful in neural style transfer task [2]. fc6

Fig. 2 (b) shows a visualization of the result from t-SNE. The average of ^Xfc6 is closer to ~Yfc6 than to Xfc6 and it makes roughly a conjecture that the domain difference between the refined and the real is smaller than that between the synthetic and the real. Additionally, it appears consistent that each example is shown as a point also moves closer to the distribution of the real image after the refinement.

is one of test statistics for measurement of the difference between two distributions. A mixture of 16 Gaussian radial basis functions (RBF) kernels, where sigma varies from

10−6 to 106, is considered to be associated continuous kernel. To avoid excessive O(n2logn) or O(n3)

We report three MMD values among Xfc6, ^Xfc6, ~Yfc6 in Table 1. It is worthy to note that (iii) is the smallest. It makes us infer that domain difference between ~X and Y is even lower than that between the other pairs, i.e. X and ~X, or X and Y. The result shows that the proposed method effectively reduces the gap between synthetic image and real image in terms of quantitative analysis.

In this paper, we introduced our method to build up the graphics-free simulation for aircraft in satellite imagery. Our approach is based on data-dependent simulated and unsupervised learning method so it could be freely adaptable to any condition of the similar tasks. The experiment shows meaningful qualitative and quantitative performance. In future work, we will focus on improving the performance of the classification and detection method of our satellite image analysis platform using refined image data. We expect that our method will contribute to the field of remote sensing, especially in data generation for automatic target recognition.