Does Summary Evaluation Survive Translation to Other Languages?

The creation of a large summarization quality dataset is a considerable, expensive, time-consuming effort, requiring careful planning and setup. It includes producing human-written and machine-generated summaries and evaluation of the summaries by humans, preferably by linguistic experts, and by automatic evaluation tools. If such effort is made in one language, it would be beneficial to be able to use it in other languages. To investigate how much we can trust the translation of such dataset without repeating human annotations in another language, we translated an existing English summarization dataset, SummEval dataset, to four different languages and analyzed the scores from the automatic evaluation metrics in translated languages, as well as their correlation with human annotations in the source language. Our results reveal that although translation changes the absolute value of automatic scores, the scores keep the same rank order and approximately the same correlations with human annotations. 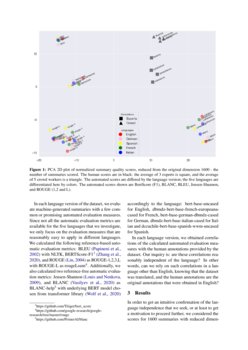 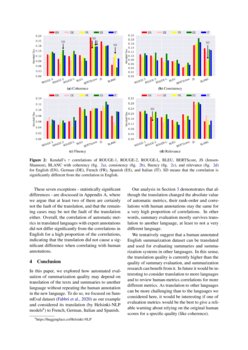 Evaluating the Efficacy of Summarization Evaluation across Languages

The quality of a summarization evaluation metric is quantified by calcul...
Daniel Deutsch, et al. ∙

How to Evaluate a Summarizer: Study Design and Statistical Analysis for Manual Linguistic Quality Evaluation

A large summarization dataset includes thousands of texts and human-written summaries of the texts (for example, CNN/Daily Mail Hermann et al. (2015)). In order to make it applicable for wider research, it may also contain machine-generated summaries by many models, accompanied by human and machine evaluations of the quality of the generated summaries Fabbri et al. (2020). Even the human annotation alone is a complicated effort, requiring careful planning and setup Iskender et al. (2021); Kryscinski et al. (2020). Can we reuse such a dataset in other languages, at least for some research purposes?

In this paper, we focus on answering this question with respect to automated summarization evaluation by using the dataset SummEval Fabbri et al. (2020) as an example. We translate this dataset from English to four other languages - French, German, Italian, and Spanish - and keep the original human annotations. We consider then correlations between automated summary evaluation measures and human annotations and show that the relative ranking of different measures does not change with translation. This means that at this point, translation can be trusted for purposes of researching and using different summarization evaluation measures in other languages, with the additional benefit of avoiding human re-annotation of the summaries after translation.

, specifically the human-annotated part. The part consists of 100 texts, and each text is accompanied by 11 human-written reference summaries and 16 machine-generated summaries produced by 16 different models. Each machine-generated summary is annotated by three experts and five crowd workers using a 5-point scale for four quality measures: consistency, relevance, coherence, and fluency. In our analysis, we took the average of the expert scores for each quality of each annotated text-summary pair.

For our analysis, we translated all this part of the dataset - 100 source texts, 1100 human reference summaries, and 1600 machine-generated summaries - into four languages, French, German, Italian and Spanish, using translation models from the transformers library Wolf et al. (2020) trained as Helsinki-NLP models222https://huggingface.co/Helsinki-NLP - opus-mt-en-de, opus-mt-en-fr, opus-mt-en-it, and opus-mt-en-es. Further, we used the same original human annotations provided by the SummEval dataset as annotations for the four translated languages.

In each language version of the dataset, we evaluate machine-generated summaries with a few common or promising automated evaluation measures. Since not all the automatic evaluation metrics are available for the five languages that we investigate, we only focus on the evaluation measures that are reasonably easy to apply in different languages. We calculated the following reference-based automatic evaluation metrics: BLEU Papineni et al. (2002) with NLTK, BERTScore-F1333https://github.com/Tiiiger/bert_score Zhang et al. (2020), and ROUGE Lin (2004) as ROUGE-1,2,3,L with ROUGE-L as rougeLsum444https://github.com/google-research/google-research/tree/master/rouge. Additionally, we also calculated two reference-free automatic evaluation metrics: Jensen-Shannon Louis and Nenkova (2009), and BLANC Vasilyev et al. (2020) as BLANC-help555https://github.com/PrimerAI/blanc with underlying BERT model chosen from transformer library Wolf et al. (2020) accordingly to the language: bert-base-uncased for English, dbmdz-bert-base-french-europeana-cased for French, bert-base-german-dbmdz-cased for German, dbmdz-bert-base-italian-cased for Italian and dccuchile-bert-base-spanish-wwm-uncased for Spanish.

In order to get an intuitive confirmation of the language independence that we seek, or at least to get a motivation to proceed further, we considered the scores for 1600 summaries with reduced dimensionality. The example shown in Figure 1

projects each 1600-dimensional vector to a 2D point. There are eight vectors of human scores, corresponding to two types of annotators (experts and crowd workers) and four human evaluation measures: coherence, consistency, fluency, and relevance. Each score is averaged over its annotators - three annotators for experts and five annotators for crowd workers. Each automated measure (for example, ROUGE-2) produced five 1600-dimensional vectors corresponding to five languages. With the seven measures, this makes 35 vectors. Figure

1 shows that the scores do not split far apart by the languages, thus providing us with a motivation for a real analysis.

To explore if the average of automatic metrics changes after translation, we calculated the non-parametric ANOVA test, Kruskal-Wallis test, between the ROUGE-1, ROUGE-2, ROUGE-L, BLEU, BERTScore, JS, and BLANC scores in five languages. The test results revealed a statistically significant difference between these automatic metrics, showing that the machine translation has influenced their absolute values.

). To determine if the correlation differences are statistically significant between languages, we applied Zou’s confidence intervals test for dependent and overlapping variables

In this paper, we explored how automated evaluation of summarization quality may depend on translation of the texts and summaries to another language without repeating the human annotation in the new language. To do so, we focused on SummEval dataset Fabbri et al. (2020) as our example and considered its translation (by Helsinki-NLP models666https://huggingface.co/Helsinki-NLP) to French, German, Italian and Spanish.

Our analysis in Section 3 demonstrates that although the translation changed the absolute value of automatic metrics, their rank-order and correlations with human annotations stay the same for a very high proportion of correlations. In other words, summary evaluation mostly survives translation to another language, at least to not a very different language.

We tentatively suggest that a human annotated English summarization dataset can be translated and used for evaluating summaries and summarization systems in other languages. In this sense, the translation quality is currently higher than the quality of summary evaluation, and summarization research can benefit from it. In future it would be interesting to consider translation to more languages and to review human-metrics correlations for more different metrics. As translation to other languages can be more challenging than to the languages we considered here, it would be interesting if one of evaluation metrics would be the best to give a reliable warning about relying on the original human scores for a specific quality (like coherence).

As we have found (Figure 2), there were 7 cases where a translation resulted in statistically significant changes of correlation of evaluation measure with original human scores. These cases are summarized in Table 2.

Any such case can be a consequence of either one or both of the following situations:

The two exceptional cases, highlighted in Table 2, - FR-Coherence-BLANC and ES-Coherence-ROUGE-2 - can be explained only by the second situation, because the quality of evaluation measure after translation only increased. Thus, we got the remaining 5 suspect cases, out of 112 comparisons (4 languages x 4 qualities x 7 measures). We have no definitive resolution about these 5 cases, but we can consider the following arguments.

If the translation lowers some summary quality (for purposes of using our evaluation measures), then it would be likely that not one but several measures would have significantly lower correlations with the original human scores. However, for each of the 5 cases we have only a single metrics per a Language-Quality pair. In 4 cases the metrics (BertScore or BLANC) uses an underlying model, and it is possible that the underlying models for BertScore in German, Spanish, Italian and for BLANC in French are not of the same quality as in English. It is also possible that the principles on which a metrics is based (whether the metrics is ROUGE-2 or BertScore or BLANC) are successful to different degrees in different languages.