We propose a neural machine translation architecture that models the surrounding text in addition to the source sentence. These models lead to better performance, both in terms of general translation quality and pronoun prediction, when trained on small corpora, although this improvement largely disappears when trained with a larger corpus. We also discover that attention-based neural machine translation is well suited for pronoun prediction and compares favorably with other approaches that were specifically designed for this task. 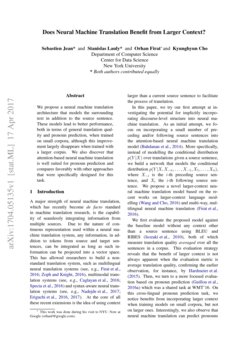 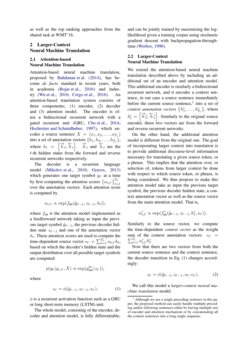 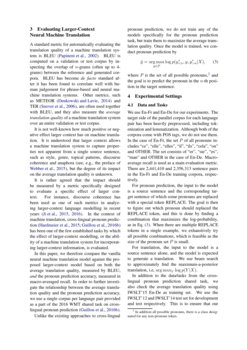 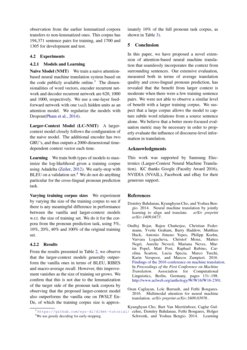 Tensor2Tensor is a library for deep learning models that is well-suited ...
Ashish Vaswani, et al. ∙

What does Attention in Neural Machine Translation Pay Attention to?

A major strength of neural machine translation, which has recently become de facto

We first evaluate the proposed model against the baseline model without any context other than a source sentence using BLEU and RIBES (Isozaki et al., 2010), both of which measure translation quality averaged

over all the sentences in a corpus. This evaluation strategy reveals that the benefit of larger context is not always apparent when the evaluation metric is average translation quality, confirming the earlier observation, for instance, by

Hardmeier et al. (2015). Then, we turn to a more focused evaluation based on pronoun prediction (Guillou et al., 2016a) which was a shared task at WMT’16. On this cross-lingual pronoun prediction task, we notice benefits from incorporating larger context when training models on small corpora, but not on larger ones. Interestingly, we also observe that neural machine translation can predict pronouns as well as the top ranking approaches from the shared task at WMT’16.

. An attention-based translation system consists of three components; (1) encoder, (2) decoder and (3) attention model. The encoder is often a bidirectional recurrent network with a gated recurrent unit

The decoder is a recurrent language model (Mikolov et al., 2010; Graves, 2013) which generates one target symbol yt′ at a time by first computing the attention scores {αt,t′}Txt=1 over the annotation vectors. Each attention score is computed by

where fatt is the attention model implemented as a feedforward network taking as input the previous target symbol ^yt′−1, the previous decoder hidden state zt′−1 and one of the annotation vector ht. These attention scores are used to compute the time-dependent source vector st′=∑Txt=1αt,t′ht, based on which the decoder’s hidden state and the output distribution over all possible target symbols are computed:

is a recurrent activation function such as a GRU or long short-term memory (LSTM) unit.

The whole model, consisting of the encoder, decoder and attention model, is fully differentiable, and can be jointly trained by maximizing the log-likelihood given a training corpus using stochastic gradient descent with backpropagation-through-time

We extend the attention-based neural machine translation described above by including an additional set of an encoder and attention model. This additional encoder is similarly a bidirectional recurrent network, and it encodes a context sentence, in our case a source sentence immediately before the current source sentence,111 Although we use a single preceding sentence in this paper, the proposed method can easily handle multiple preceding and/or following sentences either by having multiple sets of encoder and attention mechanism or by concatenating all the context sentences into a long single sequence. into a set of context annotation vectors {hc1,…,hcTc}, where hct=[→hct;←hct]. Similarly to the original source encoder, these two vectors are from the forward and reverse recurrent networks.

On the other hand, the additional attention model is different from the original one. The goal of incorporating larger context into translation is to provide additional discourse-level information necessary for translating a given source token, or a phrase. This implies that the attention over, or selection of, tokens from larger context be done with respect to which source token, or phrase, is being considered. We thus propose to make this attention model take as input the previous target symbol, the previous decoder hidden state, a context annotation vector as well as the source vector from the main attention model. That is,

Similarly to the source vector, we compute the time-dependent context vector as the weight sum of the context annotation vectors: ct′=∑Tct=1αct,t′hct.

Now that there are two vectors from both the current source sentence and the context sentence, the decoder transition in Eq. (1) changes accordingly:

We call this model a larger-context neural machine translation model.

It is rather agreed that the impact should be measured by a metric specifically designed to evaluate a specific effect of larger context. For instance, discourse coherence has been used as one of such metrics in analyzing larger-context language modelling in recent years (Ji et al., 2015, 2016). In the context of machine translation, cross-lingual pronoun prediction (Hardmeier et al., 2015; Guillou et al., 2016b) has been one of the few established tasks by which the effect of larger-context modelling, or the ability of a machine translation system for incorporating larger-context information, is evaluated.

We use En-Fr and En-De for our experiments. The target side of the parallel corpus for each language pair has been heavily preprocssed, including tokenization and lemmatization. Although both of the corpora come with POS tags, we do not use them. In the case of En-Fr, the set P of all pronouns includes “ce”, “elle”, “elles”, “il”, “ils”, “cela”, “on” and OTHER. The set consists of “er”, “sie”, “es”, “man” and OTHER in the case of En-De. Macro-average recall is used as a main evaluation metric. There are 2,441,410 and 2,356,313 sentence pairs in the En-Fr and En-De training corpora, respectively.

For pronoun prediction, the input to the model is a source sentence and the corresponding target sentence of which some pronouns are replaced with a special token REPLACE. The goal is then to figure out which pronoun should replaced the REPLACE token, and this is done by finding a combination that maximizes the log-probability, as in Eq. (

3). When there are multiple REPLACE tokens in a single example, we exhaustively try all possible combinations, which is feasible as the size of the pronoun set P is small.

In addition to the data/tasks from the cross-lingual pronoun prediction shared task, we also check the average translation quality using IWSLT’15 En-De as training set. We use the IWSLT’12 and IWSLT’14 test set for development and test respectively. This is to ensure that our observation from the earlier lemmatized corpora transfers to non-lemmatized ones. This corpus has 194,371 sentence pairs for training, and 1700 and 1305 for development and test.

We train a naive attention-based neural machine translation system based on the code publicly available online.333 https://github.com/nyu-dl/dl4mt-tutorial/ The dimensionalities of word vectors, encoder recurrent network and decoder recurrent network are 620, 1000 and 1000, respectively. We use a one-layer feedforward network with one tanh hidden units as an attention model. We regularize the models with Dropout(Pham et al., 2014).

A larger-context model closely follows the configuration of the naive model. The additional encoder has two GRU’s, and thus outputs a 2000-dimensional time-dependent context vector each time.

We train both types of models to maximize the log-likelihood given a training corpus using Adadelta (Zeiler, 2012). We early-stop with BLEU on a validation set.444We use greedy decoding for early-stopping. We do not do anything particular for the cross-lingual pronoun prediction task.

We experiment by varying the size of the training corpus to see if there is any meaningful difference in performance between the vanilla and larger-context models w.r.t. the size of training set. We do it for the corpora from the pronoun prediction task, using 5%, 10%, 20%, 40% and 100% of the original training set.

From the results presented in Table 2, we observe that the larger-context models generally outperform the vanilla ones in terms of BLEU, RIBES and macro-average recall. However, this improvement vanishes as the size of training set grows. We confirm that this is not due to the lemmatization of the target side of the pronoun task corpora by observing that the proposed larger-context model also outperforms the vanilla one on IWSLT En-De, of which the training corpus size is approximately 10% of the full pronoun task corpus, as shown in Table 3).

In this paper, we have proposed a novel extension of attention-based neural machine translation that seamlessly incorporates the context from surrounding sentences. Our extensive evaluation, measured both in terms of average translation quality and cross-lingual pronoun prediction, has revealed that the benefit from larger context is moderate when there were a few training sentence pairs. We were not able to observe a similar level of benefit with a larger training corpus. We suspect that a large corpus allows the model to capture subtle word relations from a source sentence alone. We believe that a better more-focused evaluation metric may be necessary in order to properly evaluate the influence of discourse-level information in translation.