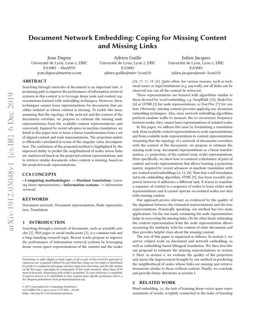 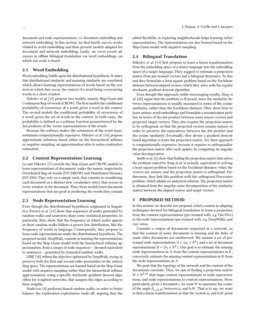 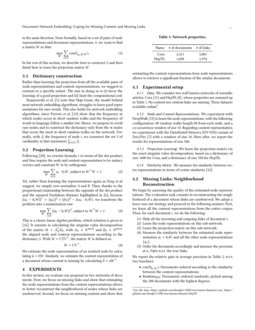 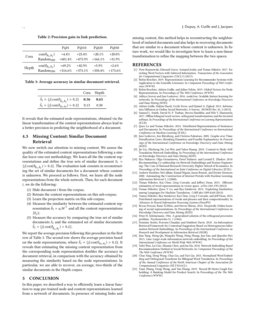 With the recent advancements in information technology there has been a ...
Nishant Nikhil, et al. ∙

Why Machines Cannot Learn Mathematics, Yet

Using top-ranked documents in response to a query has been shown to be a...
Javid Dadashkarimi, et al. ∙

Searching through a network of documents, such as scientific articles (Brochier, 2019), Web pages or social media posts (Guille et al., 2013)

, is a common task and a long-standing research topic. Recent works propose to improve the performance of information retrieval systems by leveraging dense vector space representations of the content and the nodes

The rest of this paper is organized as follows. In section 2, we survey related work on document and network embedding, as well as embedding-based bilingual translation. We then describe our proposal to estimate the missing representations in section 3. Next, in section 4, we evaluate the quality of the projection and assess the improvement brought by our method in predicting the neighborhood of nodes whose links are missing and retrieve documents similar to those without content. Finally, we conclude and provide future directions in section 5.

Word embedding builds upon the distributional hypothesis. It states that distributional similarity and meaning similarity are correlated, which allows learning representations of words based on the contexts in which they occur, the context of a word being co-occurring words in a short window.

propose approximate solutions based either on the hierarchical softmax or negative sampling, an approximation akin to noise-contrastive estimation.

Le and Mikolov (Le and Mikolov, 2014) extends the Skip-Gram and CBOW models to learn representations of documents, under the names, respectively, Distributed Bag-of-words (DV-DBOW) and Distributed Memory (DV-DM). They rely on a simple trick, that consists in considering each document as a distinct new vocabulary entry, that occurs in every window in the document. Thus, these models learn document representations that are good at predicting the words they contain.

Even though the distributional hypothesis originated in linguistics, Perozzi et al. (Perozzi et al., 2014) show that sequences of nodes generated by random walks and sentences share some statistical properties. In particular, they show that the frequency at which nodes appear in short random walks follows a power-law distribution, like the frequency of words in language. Consequently, they propose to learn node representations under the distributional hypothesis. The proposed model, DeepWalk, consists in learning the representations based on the Skip-Gram model with the hierarchical softmax approximation, from a corpus of node sequences – deemed equivalent to sentences – generated by truncated random walks.

refines the objective optimized by DeepWalk, trying to preserve both the first and second order proximities in the embedding space. The representations are learned based on the Skip-Gram model with negative sampling rather than the hierarchical softmax approximation, using a specific stochastic gradient descent algorithm for weighted networks, that samples the edges according to their weights.

Node2vec (Grover and Leskovec, 2016) performs biased random walks, in order to better balance the exploration-exploitation trade-off, arguing that the added flexibility in exploring neighborhoods helps learning richer representations. The representations are also learned based on the Skip-Gram model with negative sampling.

Mikolov et al. (Mikolov et al., 2013b) first propose to learn a linear transformation from the embedding space of a source language into the embedding space of a target language. They suggest to estimate a projection matrix from pre-trained vectors and a bilingual dictionary. To this end they formulate a least square problem based on the Euclidean distance between aligned vectors, which they solve with the regular stochastic gradient descent algorithm.

argue that the problem is ill-posed, since the similarity between representations is usually measured in terms of the cosine similarity, rather than the Euclidean distance. They show how to learn unitary word embeddings and formulate a maximization problem in terms of the dot product between some source vectors and projected target vectors. They also require the projection matrix to be orthogonal, so that the projected vectors remain unitary in order to preserve the equivalence between the dot product and the cosine similarity. Eventually, they devise a gradient descent based algorithm to learn the projection matrix. Yet, their approach is computationally expensive, because it requires to orthogonalize the projection matrix after each update, by computing its singular value decomposition.

In the rest of this section, we describe how to construct S and then detail how to learn the projection matrix W.

Rather than learning the projection from all the available pairs of node representations and content representations, we suggest to restrain to a specific subset. The aim in doing so is (i) favor the learning of a good projection and (ii) limit the computational cost.

Bojanowski et al. (Bojanowski et al., 2017) note that Skip-Gram, the model behind most network embedding algorithms, struggles to learn good representations for rare words. This also holds for network embedding algorithms, since Perrozi et al. (Perozzi et al., 2014) show that the frequency at which nodes occur in short random walks and the frequency of words in language follow a similar law. Hence, we propose to avoid rare nodes and to construct the dictionary only from the m nodes that occur the most in short random walks on the network. Formally, with fi the frequency of node i, we construct the set S of cardinality m that maximizes ∑i∈Sfi.

Following (Xing et al., 2015), we rewrite formula 1 in terms of the dot product, and thus require the node and content representation to be unitary vectors and constrain W to be orthogonal:

Yet, rather than learning the representations again as Xing et al. suggest, we simply row-normalize A and B. Then, thanks to the proportional relationship between the opposite of the dot product and the squared Euclidean distance highlighted in (L. Smith et al., 2017), because ||ai−biW||2=||ai||2+||bi||2−2(ai⋅biW), we transform the problem into a minimization one:

This is a classic linear algebra problem, which solution is given in (Schönemann, 1966). It consists in calculating the singular value decomposition of the matrix M=A⊤SBS, with AS∈Rm×k and BS∈Rm×k the aligned node and content representations according to the dictionary S. With M=UΣV⊤, the matrix W is defined as:

We consider two well known networks of scientific articles, Cora (McCallum et al., 2000) and HepTh (Leskovec et al., 2005), whose properties are summed up in Table 1. No content nor citation links are missing. These datasets available online111Get the data: https://github.com/thunlp/CANE/tree/master/datasets/cora, https://github.com/thunlp/CANE/tree/master/datasets/HepTh.

We measure the similarity between vector representations in terms of cosine similarity (Mikolov et al., 2013a).

We begin by assessing the quality of the estimated node representations. The evaluation task consists in reconstructing the neighborhood of a document whose links are unobserved. We adopt a leave-one-out strategy and proceed in the following manner. First, we learn all the content representations from the entire corpus. Then, for each document i, we do the following:

We report the relative gain in average precision in Table 2, w.r.t. two baselines:

It reveals that the estimated node representations, obtained via the linear transformation of the content representations always lead to a better precision in predicting the neighborhood of a document.

We now switch our attention to missing content. We assess the quality of the estimated content representations following a similar leave-one-out methodology. We learn all the the content representations and define the true sets of similar document Si={j|cos(θbi,bj)>0.2}. The evaluation task consists in reconstructing the set of similar documents for a document whose content is unknown. We proceed as follows. First, we learn all the node representations from the whole network. Then, for each document i, we do the following:

In this paper, we described a way to efficiently learn a linear function to map pre-trained node and content representations learned from a network of documents. In presence of missing links and missing content, this method helps in reconstructing the neighborhood of isolated documents and also helps in recovering documents that are similar to a document whose content is unknown. In future work, we would like to investigate how to learn a non-linear transformation to refine the mapping between the two spaces.