Traditional supervised learning makes the closed-world assumption that the classes appeared in the test data must have appeared in training. This also applies to text learning or text classification. As learning is used increasingly in dynamic open environments where some new/test documents may not belong to any of the training classes, identifying these novel documents during classification presents an important problem. This problem is called open-world classification or open classification. This paper proposes a novel deep learning based approach. It outperforms existing state-of-the-art techniques dramatically. 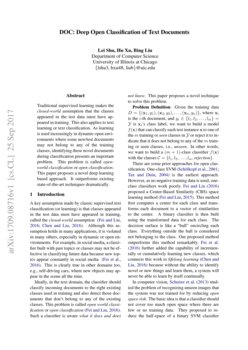 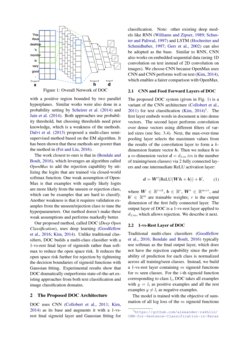 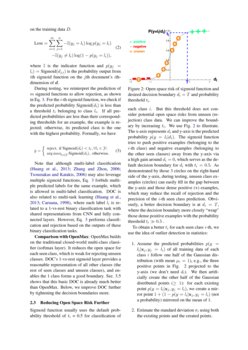 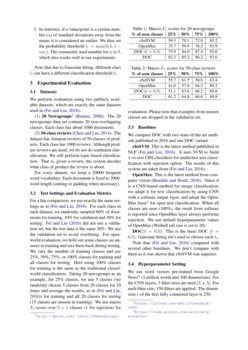 . Although this assumption holds in many applications, it is violated in many others, especially in dynamic or open environments. For example, in social media, a classifier built with past topics or classes may not be effective in classifying future data because new topics appear constantly in social media

(Fei et al., 2016). This is clearly true in other domains too, e.g., self-driving cars, where new objects may appear in the scene all the time.

Ideally, in the text domain, the classifier should classify incoming documents to the right existing classes used in training and also detect those documents that don’t belong to any of the existing classes. This problem is called open world classification or open classification (Fei and Liu, 2016). Such a classifier is aware what it does and does not know. This paper proposes a novel technique to solve this problem.

There are some prior approaches for open classification. One-class SVM (Schölkopf et al., 2001; Tax and Duin, 2004) is the earliest approach. However, as no negative training data is used, one-class classifiers work poorly. Fei and Liu (2016) proposed a Center-Based Similarity (CBS) space learning method (Fei and Liu, 2015)

. This method first computes a center for each class and transforms each document to a vector of similarities to the center. A binary classifier is then built using the transformed data for each class. The decision surface is like a “ball” encircling each class. Everything outside the ball is considered not belonging to the class. Our proposed method outperforms this method remarkably.

Fei et al. (2016) further added the capability of incrementally or cumulatively learning new classes, which connects this work to lifelong learning (Chen and Liu, 2016) because without the ability to identify novel or new things and learn them, a system will never be able to learn by itself continually.

Scheirer et al. (2013) studied the problem of recognizing unseen images that the system was not trained for by reducing open space risk

. The basic idea is that a classifier should not cover too much open space where there are few or no training data. They proposed to reduce the half-space of a binary SVM classifier with a positive region bounded by two parallel hyperplanes. Similar works were also done in a probability setting by

Scheirer et al. (2014) and Jain et al. (2014). Both approaches use probability threshold, but choosing thresholds need prior knowledge, which is a weakness of the methods. Dalvi et al. (2013) proposed a multi-class semi-supervised method based on the EM algorithm. It has been shown that these methods are poorer than the method in (Fei and Liu, 2016).

The work closest to ours is that in (Bendale and Boult, 2016), which leverages an algorithm called OpenMax

to add the rejection capability by utilizing the logits that are trained via closed-world softmax function. One weak assumption of OpenMax is that examples with equally likely logits are more likely from the unseen or rejection class, which can be examples that are hard to classify. Another weakness is that it requires validation examples from the unseen/rejection class to tune the hyperparameters. Our method doesn’t make these weak assumptions and performs markedly better.

. Unlike traditional classifiers, DOC builds a multi-class classifier with a 1-vs-rest final layer of sigmoids rather than softmax to reduce the open space risk. It reduces the open space risk further for rejection by tightening the decision boundaries of sigmoid functions with Gaussian fitting. Experimental results show that DOC dramatically outperforms state-of-the-art existing approaches from both text classification and image classification domains.

DOC uses CNN (Collobert et al., 2011; Kim, 2014) as its base and augments it with a 1-vs-rest final sigmoid layer and Gaussian fitting for classification. Note: other existing deep models like RNN (Williams and Zipser, 1989; Schuster and Paliwal, 1997) and LSTM (Hochreiter and Schmidhuber, 1997; Gers et al., 2002) can also be adopted as the base. Similar to RNN, CNN also works on embedded sequential data (using 1D convolution on text instead of 2D convolution on images). We choose CNN because OpenMax uses CNN and CNN performs well on text (Kim, 2014), which enables a fairer comparison with OpenMax.

The proposed DOC system (given in Fig. 1) is a variant of the CNN architecture (Collobert et al., 2011) for text classification (Kim, 2014)111https://github.com/alexander-rakhlin/CNN-for-Sentence-Classification-in-Keras. The first layer embeds words in document x into dense vectors. The second layer performs convolution over dense vectors using different filters of varied sizes (see Sec. 3.4). Next, the max-over-time pooling layer selects the maximum values from the results of the convolution layer to form a k-dimension feature vector h. Then we reduce h to a m-dimension vector d=d1:m (m

is the number of training/seen classes) via 2 fully connected layers and one intermediate ReLU activation layer:

where W∈Rr×k, b∈Rr, W′∈Rm×r, and b′∈Rm are trainable weights; r is the output dimension of the first fully connected layer. The output layer of DOC is a 1-vs-rest layer applied to d1:m, which allows rejection. We describe it next.

Traditional multi-class classifiers (Goodfellow et al., 2016; Bendale and Boult, 2016) typically use softmax as the final output layer, which does not have the rejection capability since the probability of prediction for each class is normalized across all training/seen classes. Instead, we build a 1-vs-rest layer containing m sigmoid functions for m seen classes. For the i-th sigmoid function corresponding to class li, DOC takes all examples with y=li as positive examples and all the rest examples y≠li as negative examples.

The model is trained with the objective of summation of all log loss of the m sigmoid functions on the training data D.

where I is the indicator function and p(yj=li)=Sigmoid(dj,i) is the probability output from ith sigmoid function on the jth document’s ith-dimension of d.

: OpenMax builds on the traditional closed-world multi-class classifier (softmax layer). It reduces the open space for each seen class, which is weak for rejecting unseen classes. DOC’s 1-vs-rest sigmoid layer provides a reasonable representation of all other classes (the rest of seen classes and unseen classes), and enables the 1 class forms a good boundary. Sec. 3.5 shows that this basic DOC is already much better than OpenMax. Below, we improve DOC further by tightening the decision boundaries more.

Sigmoid function usually uses the default probability threshold of ti = 0.5 for classification of each class i. But this threshold does not consider potential open space risks from unseen (rejection) class data. We can improve the boundary by increasing ti. We use Fig. 2 to illustrate. The x-axis represents di and y-axis is the predicted probability p(y=li|di). The sigmoid function tries to push positive examples (belonging to the i-th class) and negative examples (belonging to the other seen classes) away from the y-axis via a high gain around di=0, which serves as the default decision boundary for di with ti=0.5. As demonstrated by those 3 circles on the right-hand side of the y-axis, during testing, unseen class examples (circles) can easily fill in the gap between the y-axis and those dense positive (+) examples, which may reduce the recall of rejection and the precision of the i-th seen class prediction. Obviously, a better decision boundary is at di=T, where the decision boundary more closely “wrap” those dense positive examples with the probability threshold ti≫0.5 .

To obtain a better ti for each seen class i

-th, we use the idea of outlier detection in statistics:

We perform evaluation using two publicly available datasets, which are exactly the same datasets used in (Fei and Liu, 2016).

(2) 50-class reviews (Chen and Liu, 2014): The dataset has Amazon reviews of 50 classes of products. Each class has 1000 reviews. Although product reviews are used, we do not do sentiment classification. We still perform topic-based classification. That is, given a review, the system decides what class of product the review is about.

For every dataset, we keep a 20000 frequent word vocabulary. Each document is fixed to 2000-word length (cutting or padding when necessary).

We compare DOC with two state-of-the-art methods published in 2016 and one DOC variant.

OpenMax: This is the latest method from computer vision (Bendale and Boult, 2016). Since it is a CNN-based method for image classification, we adapt it for text classification by using CNN with a softmax output layer, and adopt the OpenMax layer333https://github.com/abhijitbendale/OSDN for open text classification. When all classes are seen (100%), the result from softmax is reported since OpenMax layer always performs rejection. We use default hyperparameter values of OpenMax (Weibull tail size is set to 20).

Note that (Fei and Liu, 2016) compared with several other baselines. We don’t compare with them as it was shown that cbsSVM was superior.

We use word vectors pre-trained from Google News444https://code.google.com/archive/p/word2vec/ (3 million words and 300 dimensions). For the CNN layers, 3 filter sizes are used [3,4,5]. For each filter size, 150 filters are applied. The dimension r of the first fully connected layer is 250.

The results of 20 newsgroups and 50-class reviews are given in Tables 1 and 2, respectively. From the tables, we can make the following observations:

This paper proposed a novel deep learning based method, called DOC, for open text classification. Using the same text datasets and experiment settings, we showed that DOC performs dramatically better than the state-of-the-art methods from both the text and image classification domains. We also believe that DOC is applicable to images.

In our future work, we plan to improve the cumulative or incremental learning method in (Fei et al., 2016) to learn new classes without training on all past and new classes of data from scratch. This will enable the system to learn by self to achieve continual or lifelong learning (Chen and Liu, 2016). We also plan to improve model performance during testing (Shu et al., 2017).