Do You Have the Right Scissors? Tailoring Pre-trained Language Models via Monte-Carlo Methods

It has been a common approach to pre-train a language model on a large corpus and fine-tune it on task-specific data. In practice, we observe that fine-tuning a pre-trained model on a small dataset may lead to over- and/or under-estimation problem. In this paper, we propose MC-Tailor, a novel method to alleviate the above issue in text generation tasks by truncating and transferring the probability mass from over-estimated regions to under-estimated ones. Experiments on a variety of text generation datasets show that MC-Tailor consistently and significantly outperforms the fine-tuning approach. Our code is available at this url. 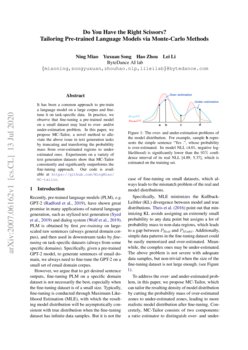 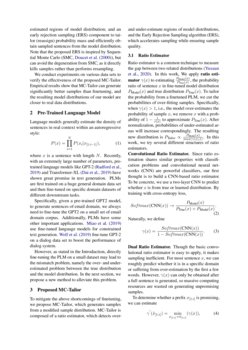 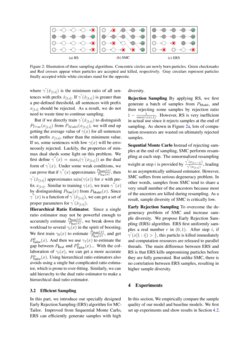 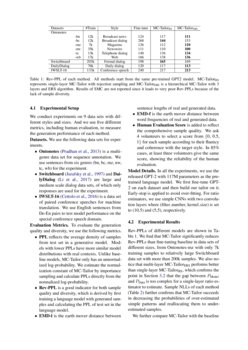 Specifically, MLE minimizes the Kullback–Leibler (KL) divergence between model and true distributions. Theis et al. (2016) point out that minimizing KL avoids assigning an extremely small probability to any data point but assigns a lot of probability mass to non-data regions, which leads to a gap between PReal and PModel. Additionally, simple data patterns in the fine-tuning dataset could be easily memorized and over-estimated. Meanwhile, the complex ones may be under-estimated. The above problem is not severe with adequate data samples, but non-trivial when the size of the fine-tuning dataset is not large enough. (see Figure 1).

We conduct experiments on various data sets to verify the effectiveness of the proposed MC-Tailor. Empirical results show that MC-Tailor can generate significantly better samples than finetuning, and the resulting model distributions of our model are closer to real data distributions.

Language models generally estimate the density of sentences in real context within an autoregressive style:

where x is a sentence with length N. Recently, with an extremely large number of parameters, pre-trained language models like GPT-2 (Radford et al., 2019) and Transformer-XL (Dai et al., 2019) have shown great promise in text generation. PLMs are first trained on a huge general domain data set and then fine-tuned on specific domain datasets of different downstream tasks.

Specifically, given a pre-trained GPT2 model, to generate sentences of email domain, we always need to fine-tune the GPT2 on a small set of email domain corpus. Additionally, PLMs have some other important applications. Miao et al. (2019) use fine-tuned language models for constrained text generation. Wolf et al. (2019) fine-tune GPT-2 on a dialog data set to boost the performance of dialog system.

However, as stated in the Introduction, directly fine-tuning the PLM on a small dataset may lead to the mismatch problem, namely the over- and under-estimated problem between the true distribution and the model distribution. In the next section, we propose a new method to alleviate this problem.

To mitigate the above shortcomings of finetuning, we propose MC-Tailor, which generates samples from a modified sample distribution. MC-Tailor is composed of a ratio estimator, which detects over- and under-estimate regions of model distributions, and the Early Rejection Sampling algorithm (ERS), which accelerates sampling while ensuring sample quality.

Since ratio estimation shares similar properties with classification problems and convolutional neural networks (CNN) are powerful classifiers, our first thought is to build a CNN-based ratio estimator. To be concrete, we use a two-layer CNN to predict whether

x is from true or learned distribution. By training with cross-entropy loss,

Dual Ratio Estimator. Though the basic convolutional ratio estimator is easy to apply, it makes sampling inefficient. For most sentence x, we can roughly predict whether it is in a specific domain or suffering from over-estimation by the first a few words. However, γ(x) can only be obtained after a full sentence is generated, so massive computing resources are wasted on generating unpromising samples.

To determine whether a prefix x[1:i] is promising, we can estimate

Rejection Sampling By applying RS, we first generate a batch of samples from PModel, and then rejecting some samples by rejection ratio 1−1max(γ(x),1). However, RS is very inefficient in actual use since it rejects samples at the end of sampling. As shown in Figure 1(a), lots of computation resources are wasted on ultimately rejected samples.

Sequntial Monte Carlo Instead of rejecting samples at the end of sampling, SMC performs resampling at each step. The unnormalized resampling weight at step i is provided by γ′(x[1:i−1])γ′(x[1:i])

, leading to an asymptotically unbiased estimator. However, SMC suffers from serious degeneracy problem. In other words, samples from SMC tend to share a very small number of the ancestors because most of the ancestors are killed during resampling. As a result, sample diversity of SMC is critically low.

Early Rejection Sampling To overcome the degeneracy problem of SMC and increase sample diversity. We propose Early Rejection Sampling (ERS) algorithm. ERS first uniformly samples a real number r in (0,1). After step i, if γ′(x[1:i])>1r, this particle is killed immediately and computation resources are released to parallel threads. The main difference between ERS and RS is that ERS kills unpromising particles before they are fully generated. But unlike SMC, there is no correlation between ERS samples, resulting in higher sample diversity.

In this section, We empirically compare the sample quality of our model and baseline models. We first set up experiments and show results in Section 4.2.

We conduct experiments on 9 data sets with different styles and sizes. And we use five different metrics, including human evaluation, to measure the generation performance of each method.

Datasets. We use the following data sets for experiments.

Evaluation Metrics. To evaluate the generation quality and diversity, we use the following metrics.

Model Details. In all the experiments, we use the released GPT-2 with 117M parameters as the pre-trained language model. We first fine-tune GPT-2 on each dataset and then build our tailor on it. Early-stop is applied to avoid over-fitting. For ratio estimators, we use simple CNNs with two convolution layers where (filter_number, kernel_size) is set to (10,5) and (5,5), respectively.

Rev-PPLs of different models are shown in Table 1. We find that MC-Tailor significantly reduces Rev-PPLs than fine-tuning baseline in data sets of different sizes, from Ontonotes-mz with only 7k training samples to relatively large Switchboard data set with more than 200k samples. We also notice that multi-layer MC-TailorERS performs better than single-layer MC-TailorRS, which confirms the point in Section 3.2 that the gap between PModel and PData is too complex for a single-layer ratio estimator to estimate. Sample NLLs of each method (Table 2) further confirms that MC-Tailor succeeds in decreasing the probabilities of over-estimated simple patterns and reallocating them to under-estimated samples.

We further compare MC-Tailor with the baseline model under other metrics. From table 4, we find MC-Tailor greatly reduce PPL, which means increased probabilities of generating samples similar to test samples. And we can draw the conclusion that sample distributions of MC-Tailor are closer to real sample distributions, with lower EMD-l and EMD-f. What’s more, human evaluation scores of MC-Tailor are about 10% higher than fine-tuning, which indicates better sample quality to human eyes. Cases shown in Table 3 further demonstrate the advantage of MC-Tailor in fluency and informativeness. Seq-GAN is also compared in our experiment. However, rev-ppls of GANs are even higher than directly fine-tuning GPT-2, and they are especially difficult to train. So we remove Seq-GAN from baseline models.

The acceleration effect of ERS is also verified in the experiment. For MC-Tailor with 1, 2, and 3 layers of ratio estimator, ERS reduces 30%, 79%, and 90% of computation wasted on unpromising samples, achieving 1.5x, 2.8x, 5x accelerations, respectively.

In this paper, we propose MC-Tailor to alleviate the over- and under-estimation problem between true and model distributions. MC-Tailor is composed of a ratio estimator, which adjusts the probabilities of MLE fine-tuned PLMs to approximate true distributions, and the ERS to accelerate sampling while ensuring sample quality. Experiments on various datasets show the effectiveness and efficiency of MC-Tailor.