Do All Good Actors Look The Same? Exploring News Veracity Detection Across The U.S. and The U.K

A major concern with text-based news veracity detection methods is that they may not generalize across countries and cultures. In this short paper, we explicitly test news veracity models across news data from the United States and the United Kingdom, demonstrating there is reason for concern of generalizabilty. Through a series of testing scenarios, we show that text-based classifiers perform poorly when trained on one country's news data and tested on another. Furthermore, these same models have trouble classifying unseen, unreliable news sources. In conclusion, we discuss implications of these results and avenues for future work. 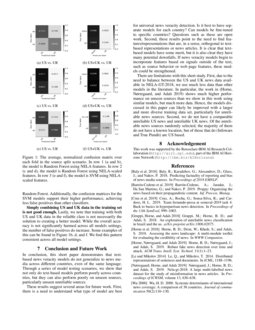 A concern with text-based news veracity classifiers is that they may not generalize across real-life situations. In Machine Learning, guarantees are based on the assumption that the data used for training a model comes from the same distribution as the data for the model’s eventual use (test data). In news veracity detection, this means we are relying on the higher level labeling concepts, such as reliability, bias, true, and false, to manifest consistently across the data points. This consistency across data point is of course dependent on the features or representation used. However, with news production (and many other socially influenced processes) this assumption may not hold and can be difficult to assess. Hence, we need to design experiments to explicitly test when and how predictions hold across different real life settings.

To a certain extent these types of experiments have been done. For example, recent work has tested news veracity classifiers performance over time, demonstrating that text-based classifiers do degrade in performance over time [horne2019robust]. The same study also experimented with news veracity classifiers under various malicious content manipulation attacks. However, there are many other real life settings that have not been studied. One real life setting that has not been explicitly tested is generalization across different countries news. While there has been a considerable amount of work on news veracity detection, the focus has been on news from the United States or the country of each news source has not been taken into account. Hence, in this work we ask the question:

Q: Do text-based news veracity models trained on one countries news data generalize to another?

Specifically, in this short paper we use the United States (US) and the United Kingdom (UK) as our case study. We choose this test-bed due to both the availability of data in both countries and the use English in both, which allows us to test state-of-the-art news veracity models across both.

There are very few works that explore news veracity detection across different countries. A 2018 study by Gruppi et al. explores text features across reliable and unreliable news sources in both the U.S. and Brazil [gruppi2018exploration]. The main goal was to understand how text features commonly used in news veracity detection change across U.S. English and Brazilian Portuguese. The authors show that a small set of writing style features work well across both languages; however, not all types of features work across both. In this paper, we focus on two countries that use the same language in news reports (i.e. the United States and the United Kingdom). Because of this single language use, we are able to explore a more complete, state-of-the-art set of text features in our analysis.

There are more general works that focus on changes in news coverage between different countries, typically over specific events [wu2000systemic]. Many of the studies in this area show significant differences between news in different countries, indicating that text-based news veracity models may perform poorly across countries.

To build our text-based news veracity models, we use two types of feature sets, one hand-crafted feature set commonly used in news veracity studies and one automatic feature extraction method. Specifically, we use:

We also test the scaled and normalized versions of these feature sets, called NELA-scaled and Doc2Vec-scaled.

In all testing schemes, we uniformly at random sample 1000 articles from each source, in each class to ensure balance. In practice, the balance between the sources has little impact on the article split and country split scenarios, but has impact on the source split scenario, as a different number of articles in each fold can inflate the measured accuracy.

In addition to these testing schemes, we test several different machine learning algorithms, including Random Forest, Extra Trees, and Support Vector Machine (SVM). As mentioned, we test both when the feature vectors are scaled and normalized and when they are not. Importantly, we only test the unscaled features for the decision tree based models (Random Forest and Extra Trees). We do this because decision trees can handle unscaled features, while SVMs cannot. In addition, past work in news veracity detection has shown high performance using Random Forest with unscaled, hand-crafted features

In Table 2, we show accuracy results for each scheme and model. In Figure 1, we show the average, normalized confusion matrix for selected models under the source split scenario, showing which classes the models make mistakes on.

Text-based news veracity models do not generalize across the US and the UK. As we hypothesized, models trained on reliable US news do not perform well when tested on reliable UK news, and vice versa. Both when using Random Forest and SVM, the country split scenario results in accuracy less than random chance. When training a model on US reliable data and testing on UK reliable data we achieve only 48.8% accuracy using Random Forest with NELA features and 41.3% when using an SVM with NELA-scaled features, creating an accuracy drop of 41.6% and 43.7% from the article split scenario, respectively.

Interestingly, the low performance across countries is not consistent across all models or training sets. For example, when using Random Forest with scaled and normalized features (both for NELA and Doc2Vec), we see small accuracy drops between the article split and the country split. Specifically, when training a model using UK reliable data and testing on US reliable data, we achieve 82% accuracy, only a drop of 3.4% from the article split scenario.

We also see that the country split tests are not always symmetrical. Across all NELA models, the country split for models trained on US is much worse than those trained on UK. For example, when using Random Forest on NELA, we achieve 48.8% accuracy when training on US and testing on UK, but we achieve a 78.4% accuracy when training on UK and testing on US. When looking at the feature importance scores in the Random Forest model for each, we note that while the feature importance rankings are fairly similar, the feature importance scores are much more uniform across features in the UK trained model than in the US trained model. We suspect that this less skewed distribution of feature splits in the UK model may help generalization to the US, particularly since similar features are most important across both the models.

Text-based models have trouble generalizing to unseen, unreliable sources. In general, we see that all model combinations perform worse on unseen sources than on seen sources. The worst performing models are those using Random Forest with scaled and normalized features. Specifically, the best performing model only obtains 44.0% accuracy when classifying unseen sources for NELA-scaled and 61.0% accuracy for Doc2Vec-scaled, whereas the corresponding models with no scaling and normalization obtain 68.9% accuracy and 64.2% accuracy respectively. So, while scaling and normalizing features for Random Forest provides the best country split performance (as discussed above), it comes at a large cost in the source split test.

We partially attribute the trouble in classifying unseen, unreliable sources to the wide range in writing styles across these sources. When looking at the individual NELA feature distributions for each unreliable source (not shown in the paper), we see a much wider spread between sources than between the US or UK sources. This variation makes sense, as many unreliable sources do not have stylistic guidelines or copy editing services, in addition to employing individuals with little training in journalistic code of conduct. On the other hand, larger, mainstream sources are likely to have journalistic training and guidelines.

SVMs generalize to unseen, unreliable sources better than Random Forest. Next, we note that the SVM models, both with NELA-scaled and with Doc2Vec-scaled, perform best across seen sources and unseen sources, with the smallest drop in accuracy between the article split test and the source split test being only 2.7% when using Doc2Vec-scaled. Across the SVM models we also note a lower standard deviation over the folds, which may indicate SVM is over-fitting less to specific sources in the training set than Random Forest. Additionally, the confusion matrices for the SVM models support their higher performance, achieving less false positives than other classifiers.

Simply combining US and UK data in the training set is not good enough. Lastly, we note that training with both US and UK data in the reliable class is not necessarily the solution to creating a better model. While the overall accuracy is not significantly harmed across all models settings, the number of false positives do increase. Some examples of this can be found in Figure 1b, d, and f. We find this pattern consistent across all model settings.

In conclusion, this short paper demonstrates that text-based news veracity models do not generalize to news media across different countries, even of the same language. Through a series of model testing scenarios, we show that not only do text-based models perform poorly across countries, but they can also perform poorly on unseen sources, particularly unseen unreliable sources.

These results suggest several areas for future work. First, there is a need to understand what type of model are best for universal news veracity detection. Is it best to have separate models for each country? Can models be fine-tuned to specific countries? Questions such as these are open work. Second, these results point to the need to find features/representations that are, in a sense, orthogonal to text-based representations or news articles. It is clear that text-based models have some merit, but it is also clear they have many potential downfalls. If news veracity models begin to incorporate features based on signals outside of the text, such as source behavior or web page features, these models could be strengthened.

There are limitations with this short study. First, due to the need to balance between the US and UK news data available in NELA-GT-2018, we use much less data than other models in the literature. In particular, the work in [horne2019robust] shows much higher performance on unseen sources than we show in this work using similar models, but much more data. Hence, the models discussed in this paper can likely be improved with a larger and more diverse training data set, particularly for unreliable news sources. Second, we do not have a comparable unreliable US news and unreliable UK news. Of the unreliable news sources randomly selected, the majority of them do not have a known location, but of those that do (Infowars and True Pundit) are US based.

This work was supported by the Rensselaer-IBM AI Research Collaboration (http://airc.rpi.edu), part of the IBM AI Horizons Network (http://ibm.biz/AIHorizons).