Faced with the massive connection, sporadic transmission, and small-sized data packets in future cellular communication, a grant-free non-orthogonal random access (NORA) system is considered in this paper, which could reduce the access delay and support more devices. In order to address the joint user activity detection (UAD) and channel estimation (CE) problem in the grant-free NORA system, we propose a deep neural network-aided message passing-based block sparse Bayesian learning (DNN-MP-BSBL) algorithm. In this algorithm, the message passing process is transferred from a factor graph to a deep neural network (DNN). Weights are imposed on the messages in the DNN and trained to minimize the estimation error. It is shown that the weights could alleviate the convergence problem of the MP-BSBL algorithm. Simulation results show that the proposed DNN-MP-BSBL algorithm could improve the UAD and CE accuracy with a smaller number of iterations. 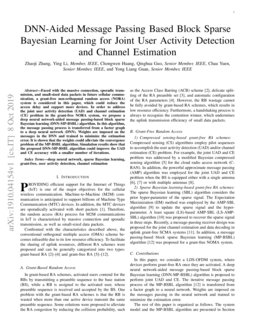 Providing efficient support for the Internet of Things (IoT) is one of the major objectives for the cellular wireless communication. Machine-to-Machine (M2M) communication is anticipated to support billions of Machine Type Communication (MTC) devices. In addition, the MTC devices are sporadically activated with short packets [1]. Therefore, the random access (RA) process for M2M communications in IoT is characterized by massive connection and sporadic transmission, as well as small-sized data packets.

Confronted with the characteristics described above, the conventional orthogonal multiple access (OMA) scheme becomes infeasible due to its low resource efficiency. To facilitate the sharing of uplink resources, different RA schemes were proposed and can be generally categorized into two types: grant-based RA [2, 3, 4] and grant-free RA [5, 6, 7, 8, 9, 10, 11, 12].

[2], delicate splitting of the RA preamble set [3], and automatic configuration of the RA parameters [4]. However, the RB wastage cannot be fully avoided by grant-based RA schemes, which results in low resource efficiency. Furthermore, a handshaking process is always to recognize the contention winner, which undermines the uplink transmission efficiency of small data packets.

Compressed sensing (CS) algorithms employ pilot sequences to accomplish the user activity detection (UAD) and/or channel estimation (CE) problem. For example, the joint UAD and CE problem was addressed by a modified Bayesian compressed sensing algorithm [5] for the cloud radio access network (C-RAN). In addition, the powerful approximate message passing (AMP) algorithm was employed for the joint UAD and CE problem when the BS is equipped either with a single antenna [6, 7] or with multiple antennas [8].

The sparse Bayesian learning (SBL) algorithm considers the prior hyper-parameter of the sparse signal. The Expectation Maximization (EM) method was employed by the AMP-SBL algorithm

[9] to update the sparse signal and the hyper-parameter. A least square (LS)-based AMP-SBL (LS-AMP-SBL) algorithm [10] was proposed to recover the sparse signal in three steps. Recently, a message-passing receiver design was proposed for the joint channel estimation and data decoding in uplink grant-free SCMA systems [11]. In addition, a message passing-based block sparse Bayesian learning (MP-BSBL) algorithm [12] was proposed for a grant-free NOMA system.

In this paper, we consider a LDS-OFDM system, where devices perform grant-free RA once they are activated. A deep neural network-aided message passing-based block sparse Bayesian learning (DNN-MP-BSBL) algorithm is proposed to perform joint UAD and CE. The iterative message passing process of the MP-BSBL algorithm [12] is transferred from a factor graph to a neural network. Weights are imposed on the messages passing in the neural network and trained to minimize the estimation error.

A LDS-OFDM system is considered in Fig. 1. There are N sub-carriers and K users. Each user is activated with probability Pa. For active user k, its information sequence bk is encoded and mapped into a QAM sequence ck∈CLc×1 with length Lc. ZC sequences are adopted as pilot sequences. One unique sequence pk with length Lt is allocated for user k, and inserted into the transmitted sequence xk, i.e., xk=[pTk cTk]T. Therefore, the length L of xk is L=Lt+Lc. The LDS spreader for user k is characterized by sk

, which is a sparse vector with length

N and dc non-zero elements. The LDS spreaders for all the K users are characterized by a LDS spreading matrix S=[s1,...,sK]. We consider a regular S, i.e., the column degree dc and the row degree dr in S are constant. Each sub-carrier is shared by dr potential users, with dr=(K/N)dc. When multiple users are active on the same sub-carrier, the RA is conducted in a NOMA manner. After the OFDM de-modulator, the received matrix is

are assumed i.i.d with noise variance

σ2w. Y can be decomposed as YL×N=[(YPLt×N)T (YcLc×N)T]T, where YP and Yc represent the received matrices w.r.t. the pilot sequences and the data sequences, respectively. We consider YP to solve the joint UAD and CE problem,

where P is assumed known to the receiver. Then we perform vectorization on the transpose of YP as in [12],

where Ps=P⊗IN, hs=vec(HT), and hk is the channel gain vector of user k on N sub-carriers. According to the LDS spreading matrix S, the transmitted symbols of each user are only spread onto dc sub-carriers. Therefore, N−dc elements in hk are zero. We further simplify hs by eliminating the zeros. Accordingly, the columns in Ps corresponding to the zeros in hs are also removed. Finally, we obtain the simplified version of (2) in equation (a) of (3). According to (3), the joint UAD and CE problem is equivalent to recovering ¯¯¯¯h.

is assumed to follow a Gamma distribution. The noise precision

. With these assumptions above, the joint a posterior probability is factorized as follows

Denote l as the iteration index and Qk,d as the product of all the incoming messages from δn′ to ¯¯¯hk,d. Then, the variance vQk,d and mean mQk,d of ¯¯¯hk,d are,

Then ^γlk is updated by the MF message passing,

Then, ^λl is updated by MF message passing,

The factor graph in Fig. 2 is densely connected, which results in the correlation problem of the Gaussian messages [13, 14, 15]. To address this problem, we propose a DNN-MP-BSBL algorithm to imposes weights on the Gaussian message update and the MF message update. To facilitate the training, the message passing is transferred from the factor graph to a DNN in Fig. 3(a). Each iteration of the MP-BSBL algorithm is now represented by one iteration block. Within each iteration block, one layer represents one particular message. Two auxiliary layers A1 and A2 are also added for illustration clarity. Therefore, as listed in Table I, there are 9 layers in each iteration block. The layer organization is shown in Fig. 3(b). The weighted message passing is represented by a weighting matrix W, whose (i,j)-th entry is non-zero if the i-th input node is connected to the j-th output node.

Layer 1: Layer 1 is the input within one iteration block.

Layer 2: Layer 2 is the auxiliary layer Al1 and the output OlA1 is derived as follows,

The fraction and .∗ operations are performed elementwise while the × operation is the matrix multiplication.

Layer 3: The output IlQ of Layer 3 is derived as follows,

Layer 4: The output Il¯¯¯h of Layer 4 are derived as follows,

Layer 6: The output OlAv2 and OlAm2 of Layer 6 is derived as

Layer 8: The output Ilz of Layer 8 is

is employed as the loss function for the training period, while the Normalized MSE (NMSE)

∥^hDNN−h∥22/∥h∥22 is considered for the simulations in the testing period.

A DNN-MP-BSBL algorithm was proposed in this paper for the joint UAD and CE problem in grant-free NORA systems. The iterative message passing process is transferred from a factor graph to a DNN, while weights are imposed on the messages and trained to improve the UAD and CE accuracy. Simulation results showed that the NMSE performance of the DNN-MP-BSBL algorithm could approach the lower bound in a feasible number of iterations, indicating its advantages for low-latency NORA systems.