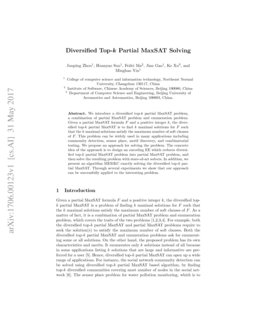 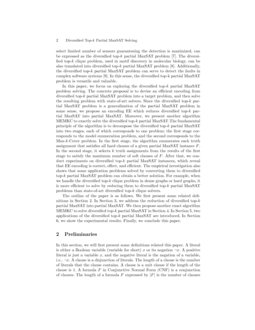 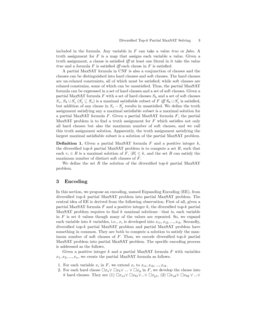 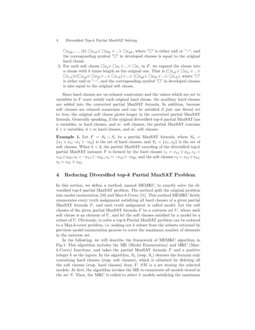 Partial Function Extension with Applications to Learning and Property Testing

We propose an algorithm based on reinforcement learning for solving NP-h...
Kenshin Abe, et al. ∙

We prove that checking if a partial matrix is partial totally positive i...
Daniel Carter, et al. ∙

The debts' clearing problem is about clearing all the debts in a group o...
Csaba Patcas, et al. ∙

In this section, we will first present some definitions related this paper. A literal is either a Boolean variable (variable for short) x or its negation ¬x. A positive literal is just a variable x, and the negative literal is the negation of a variable, i.e., ¬x. A clause is a disjunction of literals. The length of a clause is the number of literals that the clause contains. A clause is a unit clause if the length of the clause is 1. A formula F in Conjunctive Normal Form (CNF) is a conjunction of clauses. The length of a formula F expressed by |F| is the number of clauses included in the formula. Any variable in F can take a value true or false. A truth assignment for F is a map that assigns each variable a value. Given a truth assignment, a clause is satisfied iff at least one literal in it take the value true and a formula F is satisfied iff each clause in F is satisfied.

Definition 1. Given a partial MaxSAT formula F and a positive integer k, the diversified top-k partial MaxSAT problem is to compute a set R, such that each ri∈R is a maximal solution of F, |R|≤k, and the set R can satisfy the maximum number of distinct soft clauses of F.

We define the set R the solution of the diversified top-k partial MaxSAT problem.

In this section, we define a method, named MEMKC, to exactly solve the diversified top-k partial MaxSAT problem. The method split the original problem into model enumeration [10] and Max-k-Cover [11]. This method MEMKC firstly enumerates every truth assignment satisfying all hard clauses of a given partial MaxSAT formula F, and such truth assignment is called model. Let the soft clauses of the given partial MaxSAT formula F be a universe set U, where each soft clause is an element of U, and let the soft clauses satisfied by a model be a subset of U. Obviously, to solve a top-k Partial MaxSAT problem can be reduced to a Max-k-cover problem, i.e. seeking out k subset from the subsets returned by previous model enumeration process to cover the maximum number of elements in the universe set.

In the following, we will describe the framework of MEMKC algorithm in Fig.1. This algorithm includes the ME (Model Enumeration) and MKC (Max-k-Cover) functions, and takes the partial MaxSAT formula F and a positive integer k as the inputs. In the algorithm, Sh (resp. Ss) denotes the formula only containing hard clauses (resp. soft clauses), which is obtained by deleting all the soft clauses (resp. hard clauses) from F. SM is a set storing the selected models. At first, the algorithm invokes the ME to enumerate all models stored in the set S. Then, the MKC is called to select k models satisfying the maximum number of soft clauses. Fig.3 and Fig.3 propose the ME and MKC functions respectively. In the two functions, s, s1, and s2 is the current models expressed in xi=value,xj=value,..., where xi, xj, … are the variables, and value is either true or false. The symbol "□" is either null or "¬". When the symbol "□" in □x=true is null, the value of the variable x is true; otherwise false. F|x=true (resp. F|x=false) is the result of applying a simplified rule, i.e., removing all clauses containing the literal x (resp.¬x) from F, and deleting all occurrences of ¬x (resp.x) from the other clauses in F. S/s is a set of models obtained by deleting the model s from S. F|s=true is a formula received by dropping the satisfied clauses by the model s from F. SNi (i=1 or 2) is a variable recoding the number of soft clauses satisfied by the models in SM.

In this section, we will discuss the applications of the diversified top-k partial Max-SAT problem.

Covering Arrays (CAs) are interesting objects of study in combinatorics. It plays an important role in factorial designs in which each treatment is a combination of factors at different levels. A CA of run size N, factor number M, strength t can be denoted by CA(N,s1,s2,…,sM,t). It is an N×M matrix satisfying the following constraints:

For many complex software systems, there are usually different components/ parameters, each of which can take a number of values. System faults usually arise from the interaction of several parameters/components. Combinatorial testing [20, 16, 17, 18, 19] is an important black-box testing technique to reveal such faults. CAs have been used as test suites in Combinatorial testing for more than two decades. Each row of the CA represents a test case, and the i-th column corresponds to the value of parameter pi in each test case. For any t columns of the array, the N×t sub-array covers all value combinations of the corresponding t parameters. Therefore, a CA of strength t can be used as a test suite to detect the faults caused by the interactions of t parameters.

Ideally, one would like to examine the system’s behavior under all t-way combinations of the parameter values. But this kind of exhaustive testing may be very costly for a non-trivial software system. In some occasions, resource or time only permits to execute a certain number of test cases. It is highly desirable to maximize the coverage of these test cases. Given parameters, coverage criteria, and a positive integer k, a diversified top-k CA is a k×M sub-matrix of a CA in which the number of ordered combination of t values from different columns is maximized. The diversified top-k CA problem can be also solved by transforming it to diversified top-k partial MaxSAT. Suppose there is a positive integer k and a CA(N,s1,s2,…,sM,t).Then each value combination can be modeled as a variable. If two value combinations contradict each other, then we add a hard clause, i.e., ¬vari∨¬varj, where the value combination modeled as vari contradicts with varj. In addition, the soft part is formed by each variable, i.e., vari. The integer k is unchanged.

Note that, in general, sij>1. This example set that way is only to illustrate how the transformation works.

In this section, we perform experiments to evaluate the effectiveness and efficiency of EE encoding from the comparison of our algorithm MEMKC, diversified top-k clique solver EnumKOpt [12], diversified top-k CA solver k-CA [20], and the state-of-the-art partial MaxSAT solvers Openwbo [21], Dist [22], and CCLS [23].

We implement MEMKC algorithm in C++ programming language. Since enumerating all models is computationally intractable, MEMKC is only used in Part 1 to evaluate the small-scale instances. EnumKOpt is the best current approximate solver for diversified top-k clique. Diversified top-k CA solver k-CA implemented in C++ is an approximate solver by greedily calling the state-of-the-art CA solver TCA [20]. Dist and CCLS are excellent approximate solvers for partial MaxSAT. The time limits of EnumKOpt, k-CA, Dist, and CCLS are set to 1800, 300, 300, 300 seconds respectively when they execute once on each instance. Openwbo, an exact solver, wins the first prize in unweighted partial MaxSAT track in MaxSAT Evaluation 2016. The cut off time of Openwbo is set to 30000 seconds. In the experimental results, if a solver fails to find a feasible solution in the cut off time, the corresponding results are marked with "-". The execution time retured is in seconds. #uncov represents the number of unsatisfied soft clauses (uncovered nodes or value combinations) solved by solvers. And the results obtained by Dist and CCLS are the average values by executing ten times on each instance. All experiments are running on a workstation under Linux with 8 cores of Inter(R) Xeon(R) E7-4820 v2 @2.00GHz CPU and 8GB RAM.

Part 1: This experiment is to demonstrate the effectiveness of MEMKC. It should be noted that since MEMKC need to enumerate all the Fig.4 illustrates the number of unsatisfied soft clauses returned by MEMKC solver and partial MaxSAT solvers, including exact solver Openwbo and approximate solvers Dist, CCLS, on random diversified top-k partial MaxSAT instances. These random instances solved by the partial MaxSAT solvers are encoded with EE encoding. In the experiment, vicj represents the instance with i variables, j−i hard clauses, and i soft clauses. The results reported in Fig.4 suggest that MEMKC is effective because each solver can obtain the same results on the identical instances.

Part 2: The purpose of the experiment is to verify the effectiveness of the EE encoding. Table 1 presents the performance of three partial MaxSAT solvers on instances encoded from random diversified top-k partial MaxSAT instances with EE encoding. In this experiment, we vary k from 1 to 6. The scale of these instances (expressed by vari) ranges from 40 to 100 variables and 200 to 1200 clauses, where the number of soft clauses is from 40 to 100. Table 1 records the mean number of unsatisfied soft clauses for each solver in a set of 30 instances. By analyzing the results in Table 1, we can see that the instances with a few variables can be exact solved, and all instances can be successfully settled by approximate solvers, Dist and CCLS, which reveals that the EE encoding is effect.

j is the probability. In the last experiment, we choose the well-known BHOSLIB benchmark, which is famous for its hardness [24].