In this paper we provide the asymptotic theory of the general phi-divergence measures. We use the empirical probability distribution. 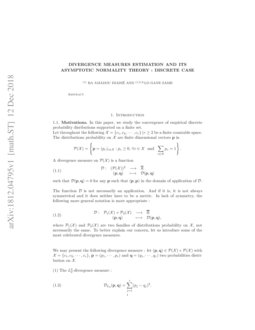 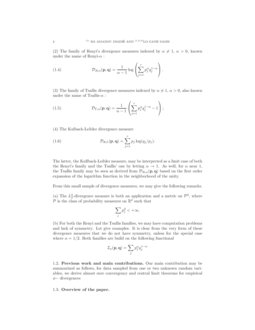 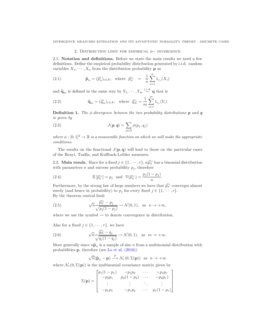 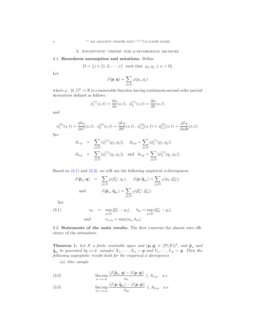 In this paper, we study the convergence of empirical discrete probability disributions supported on a finite set. Let throughout the following X={c1,c2,⋯,cr}(r≥2 be a finite countable space. The distributions probability on X


A divergence measure on P(X) is a function

The function D is not necessarily an application. And if it is, it is not always symmetrical and it does neither have to be a metric. In lack of symmetry, the following more general notation is more appropriate :

where P1(X) and P2(X) are two families of distributions probability on X, not necessarily the same. To better explain our concern, let us introduce some of the most celebrated divergence measures.

(2) The family of Renyi’s divergence measures indexed by α≠1, α>0, known under the name of Renyi-α :

(3) The family of Tsallis divergence measures indexed by α≠1, α>0, also known under the name of Tsallis-α :

The latter, the Kullback-Leibler measure, may be interpreted as a limit case of both the Renyi’s family and the Tsallis’ one by letting α→1. As well, for α near 1, the Tsallis family may be seen as derived from DR,α(p,q) based on the first order expansion of the logarithm function in the neighborhood of the unity.

From this small sample of divergence measures, we may give the following remarks.

(a) The L22-divergence measure is both an application and a metric on P2, where P is the class of probability measures on Rd such that

(b) For both the Renyi and the Tsallis families, we may have computation problems and lack of symmetry. Let give examples. It is clear from the very form of these divergence measures that we do not have symmetry, unless for the special case where α=1/2. Both families are build on the following functional

Our main contribution may be summurized as follows, for data sampled from one or two unknown random variables, we derive almost sure convergency and central limit theorems for empirical

Before we state the main results we need a few definitions. Define the empirical probability distribution generated by i.i.d. random variables X1,⋯,Xn from the distribution probability p as

and ˆqm is defined in the same way by Y1,⋯,Ymi.i.d.∼q that is

where ϕ:[0,1]2→R is a measurable function on which we will make the appropriate conditions.

The results on the functional J(p,q) will lead to those on the particular cases of the Renyi, Tsallis, and Kullback-Leibler measures.

has a binomial distribution with parameters

Furthermore, by the strong law of large numbers we have that

ˆpcjn converges almost surely (and hence in probability) to pj for every fixed j∈{1,⋯,r}. By the theorem central limit

where we use the symbol ⇝ to denote convergence in distribution.

More generally since nˆpn is a sample of size n from a multinomial distribution with probabilities p, therefore (see Lo et al. (2016))

where Nr(0,Σ(p)) is the multinomial covariance matrix given by

where φ:[0,1]2→R is a mesurable function having continuous second order partial derivatives defined as follows :

3.2. Statements of the main results

The first concerns the almost sure efficiency of the estimators.

Let X a finite countable space and (p,q)∈(P(X))2, and ˆpn and ˆqm be generated by i.i.d. samples X1,⋯,Xn∼p and Y1,⋯,Ym∼q. Then the following asymptotic results hold for the empirical ϕ-divergences

The second concerns the asymptotic normality of the estimators.

Under the same assumptions as in theorem 1, the following central limit theorems hold for empirical ϕ-divergences

Quite a few number of divergence measures are not symmetrical. Among these non-symmetrical measures are some of the most interesting ones. For such measures, estimators of the form (J(ˆpn,q), J(p,ˆqm) and J(ˆpn,ˆqm) are not equal to J(g,ˆpn), J(ˆqm,f) and J(ˆqm,ˆpn) respectively.

In one-sided tests, we have to decide whether the hypothesis p=q, for q known and fixed, is true based on data from p. In such a case, we may use the statistics one of the statistics (J(ˆpn,q) and J(q,ˆpn) to perform the tests. We may have information that allows us to prefer one of them. If not, it is better to use both of them, upon the finiteness of both J(p,q) and J(q,p), in a symmetrized form as

Under the same assumptions as in theorem 1, the following hold

Under the same assumptions as in theorem 1, the following hold

Remark The proof of these extensions will not be given here, since they are straight consequences of the main results. As well, such considerations will not be made again for particular measures for the same reason.

These two families are expressed through the functional

which is of the form of the ϕ−divergence measure with

A- (a)- The asymptotic behavior of the Tsallis divergence measure.

As to the symmetrized form

we need the supplementary notations:

Let Assumptions LABEL:C1 and LABEL:C2 hold and let (BD) be satisfied. Then for any α>0, α≠0,

Let Assumptions LABEL:C1 and LABEL:C2 hold and let (BD) be satisfied. Then for any α>0, α≠0, we have

The treatment of the asymptotic behavior of the Renyi-α, α>0, α≠1 is obtained from Part (A) (a) by expansions and by the application of the delta method.

We first remark that

Let Assumptions LABEL:C1 and LABEL:C2 hold and let (BD) be satisfied. Then for any α>0,α≠1,

As to the symetrized form

we need the supplementary notations:

Let Assumptions LABEL:C1 and LABEL:C2 hold and let (BD) be satisfied. Then for any α>0,α≠1,