Stochastic computing has a long history as an alternative method of performing arithmetic on a computer. While it can be considered an unbiased estimator of real numbers, it has a variance and MSE on the order of Ω(1/N). On the other hand, deterministic variants of stochastic computing remove the stochastic aspect, but cannot approximate arbitrary real numbers with arbitrary precision and are biased estimators. However, they have an asymptotically superior MSE on the order of O(1/N^2). Recent results in deep learning with stochastic rounding suggest that the bias in the rounding can degrade performance. We proposed an alternative framework, called dither computing, that combines aspects of stochastic computing and its deterministic variants and that can perform computing with similar efficiency, is unbiased, and with a variance and MSE also on the optimal order of Θ(1/N^2). We also show that it can be beneficial in stochastic rounding applications as well. We provide implementation details and give experimental results to comparatively show the benefits of the proposed scheme. 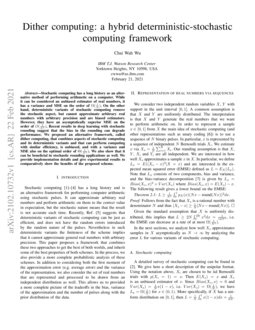 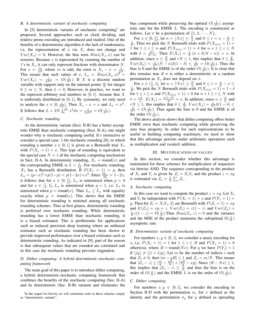 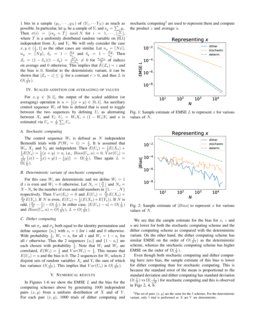 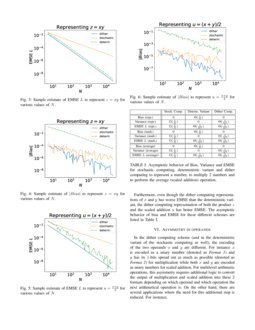 Stochastic computing [1, 2, 3, 4] has a long history and is an alternative framework for performing computer arithmetic using stochastic pulses. It can approximate arbitrary real numbers and perform arithmetic on them to the correct value in expectation, but the stochastic nature means that the result is not accurate each time. Recently, Ref. [5]

suggests that deterministic variants of stochastic computing can be just as efficient, and does not have the random errors introduced by the random nature of the pulses. Nevertheless in such deterministic variants the finiteness of the scheme implies that it cannot approximate general real numbers with arbitrary precision. This paper proposes a framework that combines these two approaches to get the best of both worlds, and inherit some of the best properties of both schemes. In the process, we also provide a more complete probabilistic analysis of these schemes. In addition to considering both the first moment of the approximation error (e.g. average error) and the variance of the representation, we also consider the set of real numbers that are represented and processed to be drawn from an independent distribution as well. This allows us to provided a more complete picture of the tradeoffs in the bias, variance of the approximation and the number of pulses along with the prior distribution of the data.

X, Y with support in the unit interval [0,1]. A common assumption is that X and Y

are uniformly distributed. The interpretation is that

X and Y generate the real numbers that we want to perform arithmetic on. In order to represent a sample x∈[0,1] from X the main idea of stochastic computing (and other representations such as unary coding [6]) is to use a sequence of N binary pulses. In particular, x is represented by a sequence of independent N Bernoulli trials Xi. We estimate x via Xs=1N∑Ni=1Xi. Our standing assumption is that X, Y, Xi and Yi are all independent. We are interested in how well Xs approximates a sample x in X. In particular, we define Lx=E((Xs−x)2|X=x) and are interested in the expected mean squared error (EMSE) defined as L=EX(Lx). Note that Lx consists of two components, bias and variance, and the bias-variance decomposition [7] is given by Lx=Bias(Xs,x)2+Var(Xs) where Bias(Xs,x)=E(Xs)−x. The following result gives a lower bound on the EMSE:

Proof: Follows from the fact that Xs is a rational number with denominator N and thus |Xs−x|≥1N|Nx−round(Nx)|. □

Given the standard assumption that X is uniformly distributed, this implies that L≥2N∫12N0x2dx=112N2, i.e. the EMSE can decrease at a rate of at most Ω(1N2).

In the next sections, we analyze how well Xs approximates samples in X asymptotically as N→∞ by analyzing the error L for various variants of stochastic computing.

In [5] deterministic variants of stochastic computing111In the sequel for brevity we will sometimes refer to these schemes simply as “deterministic variants”. are proposed. Several approaches such as clock dividing, and relative prime encoding are introduced and studied. One of the benefits of a deterministic algorithm is the lack of randomness, i.e. the representation of x via Xi does not change and Var(Xs)=0. However, the bias term Bias(Xs,x) can be nonzero. Because x is represented by counting the number of 1’s in Xi, it can only represent fractions with denominator N. For x=m2N where m

is odd, the error is

has a Bernoulli distribution. If

The main goal of this paper is to introduce dither computing, a hybrid deterministic-stochastic computing framework that combines the benefits of the stochastic computing (Sec. II-A) and its deterministic (Sec. II-B) variants and eliminates the bias component while preserving the optimal O(1N2) asymptotic rate for the EMSE L. The encoding is constructed as follows. Let σ be a permutation of {1,2,⋯,N}.

The above analysis shows that dither computing offers better EMSE error than stochastic computing while preserving the zero bias property. In order for such representations to be useful in building computing machinery, we need to show that this advantage persists under arithmetic operations such as multiplication and (scaled) addition.

In this section, we consider whether this advantage is maintained for these schemes for multiplication of sequences via bitwise AND. The sequence corresponding to the product of Xi and Yi is given by Zi=XiYi and the product z=xy is estimated via Zs=1N∑iZi.

For numbers x,y∈[0,1], we consider the encoding in Section II-D with the permutation σx for x defined as the identity and the permutation σy for y defined as spreading 1 bits in a sample (y1,⋯,yN) of (Y1,⋯YN) as much as possible. In particular, let yi be a sample of Yi and sy=∑iyi. Then σ(i)=⌊isy+T⌋modN for i=1,⋯,⌊Nsy⌋, where T is a uniformly distributed random variable on [0,1] independent from Xi and Yi. We will only consider the case x,y∈(12,1] as the other cases are similar. Let nx=⌈Nx⌉, ny=⌈Ny⌉, δx=1−Nxnx and δy=1−Nyny. Then Zi=(1−δx)(1−δy)=N2znxny≠0 for nxnyN of indices on average and 0 otherwise. This implies that E(Zs)=z and the bias is 0. Similar to the deterministic variant, it can be shown that |Zs−z|≤cN for a constant c>0, and thus L is O(1N2).

For x,y∈[0,1], the output of the scaled addition (or averaging) operation is u=12(x+y)∈[0,1]. An auxiliary control sequence Wi of bits is defined that is used to toggle between the two sequences by defining Ui as alternating between Xi and Yi: Ui=WiXi+(1−Wi)Yi and u is estimated via Us=1N∑iUi.

In Figures 1-6 we show the EMSE L and the bias for the computing schemes above by generating 1000 independent pairs (x,y) from a uniform distribution of X and of Y. For each pair (x,y), 1000 trials of dither computing and stochastic computing222The set of pairs (x,y) are the same for the 3 schemes. For the deterministic variant, only 1 trial is performed as X are Y are deterministic. are used to represent them and compute the product z and average u.

In the dither computing scheme (and in the deterministic variant of the stochastic computing as well), the encoding of the two operands x and y are different. For instance x is encoded as a unary number (denoted as Format 1) and y has its 1-bits spread out as much as possible (denoted as Format 2) for multiplication while both x and y are encoded as unary numbers for scaled addition. For multilevel arithmetic operations, this asymmetry requires additional logic to convert the output of multiplication and scaled addition into these 2 formats depending on which operand and which operation the next arithmetical operation is. On the other hand, there are several applications where the need for this additional step is reduced. For instance,

Thus we introduce dither rounding as follows. We assume α≥0 as the case α<0 can be handled similarly. We define dither rounding of a real number α≥0 as d(α,i)=⌊α⌋+Xi where {Xi} is the dither computing representation of x=α−⌊α⌋ as defined in Sect. II-D and α−⌊α⌋ is the fractional part of α. Note that there is an index i in the definition of d(⋅,⋅) which is an integer 0≤i<N. In practice we will compute i as σ(ismodN), where is counts how many times the dither rounding operation has been applied so far and σ is a fixed permutation, one for the left operand and one for the right operand of the scalar multiplier.

To illustrate the performance of these different rounding schemes, consider the problem of matrix-matrix multiplication, a workhorse of computational science and deep learning algorithms. Let A and B be p×q and q×r matrices with elements in [0,1]. The goal is to compute the matrix C=AB. A straightforward algorithm for computing C requires pqr (scalar) multiplications. Let us assume that we have at our disposal only k-bit fixed point digital multipliers and thus floating point real numbers are rounded to k-bits before using the multiplier. We want to compare the performance of computing C=AB between traditional rounding, stochastic rounding and dither rounding. In particular, since each element of A is used r times and each element of B is used p times, for dither rounding we set N=min(p,r). For dither rounding the computation of each of the pqr partial results AijBjk is illustrated in Fig. 7, and the other schemes can be obtained by simply replacing the rounding scheme. We measure the error by computing the Frobenius matrix norm ef=∥C−~C∥fro where ~C is the product matrix computed using the specified rounding method and the k-bit fixed point multiplier. In our case this is implemented by rescaling the interval [0,1] to [0,2k−1] and rounding to fixed point k-bit integers. Note that the Frobenius matrix norm is equivalent to the l2 vector norm when the matrix is flattened as a vector.

are both rounded to the zero matrix, and

For the next numerical experiment, we compare stochastic rounding with dither rounding and set N=p=q=r to be 100 or 200 with A, B random matrices with elements in [0,1) and computed 100 trials each. The results are shown in Fig. 9 where we plot the error ef for various k. Again we see that dither rounding has a smaller average error in computing C than stochastic rounding. Based on our analysis above, similar to the previous numerical results, we expect these gaps to widen as N,p,q,r increase.