Distributions in the constant-differentials Pólya process

We study a class of unbalanced constant-differentials Pólya processes on white and blue balls. We show that the number of white balls, the number of blue balls, and the total number of balls, when appropriately scaled, all converge in distribution to a gamma random variables with parameters depending on the differential index and the amount of ball addition at the epochs, but not on the initial conditions. The result is obtained by an analytic approach utilizing partial differential equations. 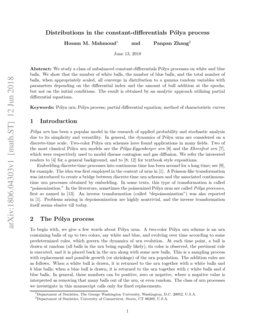 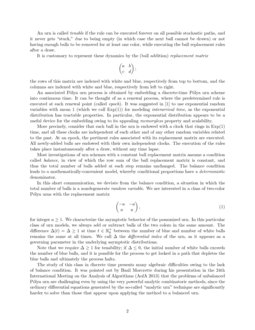 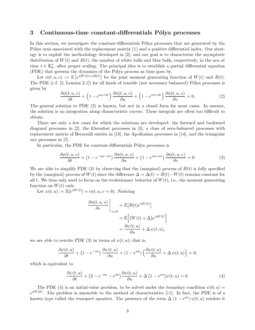 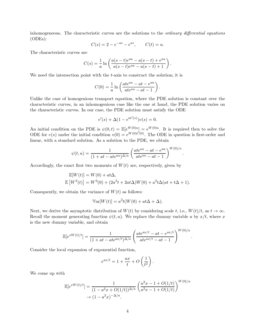 Pólya urns are urns where at each unit of time a ball is drawn and repla...
Cyril Banderier, et al. ∙

Periodic Pólya urns and an application to Young tableaux

Pólya urns are urns where at each unit of time a ball is drawn and is re...
Cyril Banderier, et al. ∙

We describe a neural-based method for generating exact or approximate so...
Maysum Panju, et al. ∙

The purpose of this paper is fourfold. The first is to develop the theor...
Ethan Cotterill, et al. ∙

We show that any (real) generalized stochastic process over ℝ^d can be e...
R. Carrizo Vergara, et al. ∙

One of the main problems studied in statistics is the fitting of models....
Marc Härkönen, et al. ∙

has been a popular model in the research of applied probability and stochastic analysis due to its simplicity and versatility. In general, the dynamics of Pólya urns are considered on a discrete-time scale. Two-color Pólya urn schemes have found applications in many fields. Two of the most classical Pólya urn models are the

Pólya-Eggenberger urn (see [10]) and the Ehrenfest urn (see [11]), which were respectively used to model disease contagion and gas diffusion. In modern times, different types of Pólya urns are utilized to study scientific models from more diverse areas, such as the play-the-winner scheme in clinical trials (e.g., [21, 23]), and recursive tree models and searching algorithms in computer science (e.g., [18]). In addition, mathematicians, probabilists and theorists are committed to developing rigorous methods for characterizing the dynamics of Pólya urns analytically. Some exactly solvable Pólya urn models are summarized and listed in [13], and the extensions to solvable randomized Pólya urns appear in [20]. We refer the interested readers to [4] for a general background, and to [14, 19] for textbook style expositions.

Embedding discrete-time processes into continuous time has been around for a long time; see [15], for example. The idea was first employed in the context of urns in [1]. A Poisson-like transformation was introduced to create a bridge between discrete-time urn schemes and the associated continuous-time urn processes obtained by embedding. In some articles or texts, this type of transformation is called “poissonization.” In the literature, sometimes the poissonized Pólya urns are called Pólya processes, first so named in [22]. An inverse transformation (called “depoissonization”) was also reported in [1]. Problems arising in depoissonization are highly nontrivial, and the inverse transformation itself seems elusive till today.

To begin with, we give a few words about Pólya urns. A two-color Pólya urn scheme is an urn containing balls of up to two colors, say white and blue, and evolving over time according to some predetermined rules, which govern the dynamics of urn evolution. At each time point, a ball is drawn at random (all balls in the urn being equally likely), its color is observed, and it is placed back in the urn along with some new balls according to the pertinent addition rule. This is a sampling process with replacement and possible growth (or shrinkage) of the urn population. The addition rules are as follows. When a white ball is drawn, it is returned to the urn together with a white balls and b blue balls; when a blue ball is drawn, it is returned to the urn together with c white balls and d blue balls. In general, these numbers can be positive, zero or negative, where a negative value is interpreted as removing that many balls out of the urn, or even random. The class of urn processes we investigate in this manuscript calls only for fixed replacements.

An urn is called tenable if the rule can be executed forever on all possible stochastic paths, and it never gets “stuck,” due to being empty (in which case the next ball cannot be drawn) or not having enough balls to be removed for at least one color, while executing the ball replacement rules after a draw.

An associated Pólya urn process is obtained by embedding a discrete-time Pólya urn scheme into continuous time. It can be thought of as a renewal process, where the predetermined rule is executed at each renewal point (called epoch). It was suggested in [1] to use exponential random variables with mean 1 (which we call Exp(1)) for modeling interarrival time

More precisely, consider that each ball in the urn is endowed with a clock that rings in Exp(1) time, and all these clocks are independent of each other and of any other random variables related to the past. At an epoch, the pertinent rules associated with its replacement matrix are executed. All newly-added balls are endowed with their own independent clocks. The execution of the rules takes place instantaneously after a draw, without any time lapse.

Most investigations of urn schemes or processes with a constant ball replacement matrix assume a condition called balance, in view of which the row sum of the ball replacement matrix is constant, and thus the total number of balls added at each step remains unchanged; see [5, 6] for instance. The balance condition leads to a mathematically-convenient model, whereby conditional proportions have a deterministic denominator.

In this short communication, we deviate from the balance condition, a situation in which the total number of balls is a nondegenerate random variable. We are interested in a class of two-color Pólya urns with the replacement matrix

for integer a≥1. We characterize the asymptotic behavior of the possonized urn. In this particular class of urn models, we always add or subtract balls of the two colors in the same amount. The difference between the number of blue and number of white balls remains the same at all times. We call Δ the differential index of the urn, as it appears as a governing parameter in the underlying asymptotic distributions.

Note that we require Δ≥1 for tenability; if Δ≤0, the initial number of white balls exceeds the number of blue balls, and it is possible for the process to get locked in a path that depletes the blue balls and ultimately the process halts. Besides, this class of Pólya processes does not belong to generalized urn processes investigated in the seminal article [12]

, as several assumptions therein are not satisfied, rendering our research novel. The study of this class in discrete time presents many algebraic difficulties owing to the lack of balance condition. It was pointed out by Basil Morcrette during his presentation in the 24th International Meeting on the Analysis of Algorithms (AofA 2013) that the problems of unbalanced Pólya urn are challenging even by using the very powerful analytic combinatoric methods, since the ordinary differential equations generated by the so-called “analytic urn” technique are significantly harder to solve than those that appear upon applying the method to a balanced urn.

In this section, we investigate the constant-differentials Pólya processes that are generated by the Pólya urns associated with the replacement matrix in (1) and a positive differential index. Our strategy is to exploit the methodology developed in [2], and our goal is to characterize the asymptotic distribution of W(t) and B(t), the number of white balls and blue balls, respectively, in the urn at time t∈R+0, after proper scaling. The principal idea is to establish a partial differential equation (PDE) that governs the dynamics of the Pólya process as time goes by.

be the joint moment generating function of

W(t) and B(t). The PDE in [2] is valid for all kinds of tenable urn processes (not necessarily balanced).

The general solution to PDE (2) is known, but not in a closed form for most cases. In essence, the solution is an integration along characteristic curves. These integrals are often too difficult to obtain.

In particular, the PDE for constant-differentials Pólya processes is

which is equivalent to the stated PDE. ∎

PDE (4) is an initial-value problem, to be solved under the boundary condition ψ(0,u)=euW(0). The problem is amenable to the method of characteristics in [17]. In fact, the PDE is of a known type called the transport equation. The presence of the term Δ(1−eau)ψ(t,u) renders it inhomogeneous.

The characteristic curves for PDE (4) are the solutions to the ordinary differential equations (ODEs):

The characteristic curves are

We need the intersection point with the t-axis to construct the solution; it is

An initial condition on the PDE is ψ(0,t)=E[eW(0)u]=eW(0)u. It is required then to solve the ODE for v(s) under the initial condition v(0)=eW(0)C(0). The ODE in question is first-order and linear, with a standard solution. As a solution to the PDE, we obtain

Next, we derive the asymptotic distribution of W(t) by considering scale t, i.e., W(t)/t, as t→∞. Recall the moment generating function ψ(t,u)

. We replace the dummy variable

u by x/t, where x is the new dummy variable, and obtain

We come up with

In the last convergence relation, the right-hand side is the moment generating function of a gamma random variable with shape parameter Δ/a and scale parameter a2. We thus conclude the stated convergence in distribution according to Lévy’s continuity theorem; see [16, p. 172]. ∎

The mean and variance of

W(t) are given by

The variance then follows after simplifying E[W2(t)]−E2[W(t)]. ∎

In view of the constant differential condition, we have

4 An alternative approach via martingale

We use the superscript ⊤ on a matrix to denote its transpose, and consider B=A⊤. It is folklore that e−tBX(t), where X(t)

t, is a continuous-time martingale, which has been observed in many classes of Pólya processes. This is shown in [12]

0. We prove next that indeed, e−tBX(t) is a martingale, too, for the class of constant-differentials Pólya processes.

The vector e−tBX(t) is a bivariate martingale with respect to the natural filtration generated Ft by the evolution of a constant-differentials Pólya process associated with Matrix (1).

Let us interpret the top row, which reads

so (W(t)−aΔt) is a martingale. Similarly, we have

At the vectorial level we get

and we conclude that e−tBX(t) is a two-dimensional martingale. ∎

The mean in Corollary 1 can be obtained from the martingale formulation, as we have

However, it is harder to obtain higher moments or the distribution by this technique.

By the triangle inequality, we have

where the second line is followed by Corollary 1. By Cauchy-Schwarz inequality, we thus get

which proves that E|W(t)/t−aΔ| is bounded for large value of t. ∎

The mean, E|W(t)/t−aΔ|, is not uniformly bounded for all t∈R+; more precisely, it blows up when t is close to 0. We thus conjecture that W(t)/t may not converge to gamma almost surely.