It is well known that the isotonic least squares estimator is characterized as the derivative of the greatest convex minorant of a random walk. Provided the walk has exchangeable increments, we prove that the slopes of the greatest convex minorant are distributed as order statistics of the running averages. This result implies an exact non-asymptotic formula for the squared error risk of least squares in isotonic regression when the true sequence is constant that holds for every exchangeable error distribution. 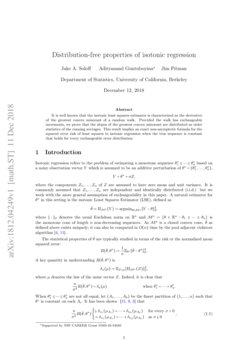 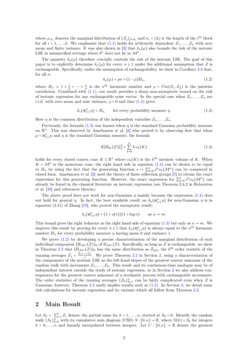 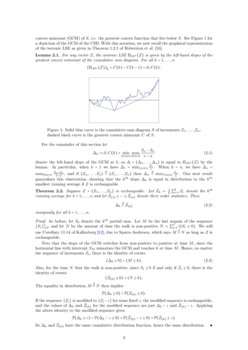 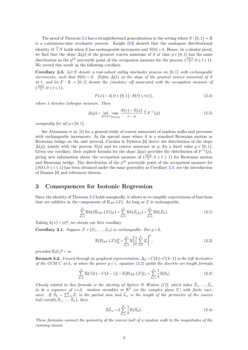 How to estimate the memory of the Elephant Random Walk

We introduce an original way to estimate the memory parameter of the ele...
Bernard Bercu, et al. ∙

The aim of this paper is to investigate the asymptotic behavior of the s...
Bernard Bercu, et al. ∙

Instead of minimizing the sum of all n squared residuals as the classica...
Yijun Zuo, et al. ∙

based on a noisy observation vector

Y which is assumed to be an additive perturbation of θ∗=(θ∗1,…,θ∗n),

where the components Z1,…,Zn of Z

are assumed to have zero mean and unit variance. It is commonly assumed that

Z1,…,Zn are independent and identically distributed (i.i.d.) but we work with the more general assumption of exchangeability in this paper. A natural estimator for θ∗ in this setting is the isotonic Least Squares Estimator (LSE), defined as

where ∥⋅∥2 denotes the usual Euclidean norm on Rn and Mn:={θ∈Rn:θ1≤⋯≤θn} is the monotone cone of length n non-decreasing sequences. As Mn is a closed convex cone, ^θ as defined above exists uniquely; it can also be computed in O(n) time by the pool adjacent violators algorithm [4, 11].

The statistical properties of ^θ are typically studied in terms of the risk or the normalized mean squared error:

A key quantity in understanding R(^θ,θ∗) is

where μ denotes the law of the noise vector Z. Indeed, it is clear that

where μAi denotes the marginal distribution of (Zj)j∈Ai and ni=|Ai| is the length of the ith block for all i=1,…,k. We emphasize that (1.1) holds for arbitrarily dependent Z1,…,Zn with zero mean and finite variance. It was also shown in [3] that δn(μ) also bounds the risk of the isotonic LSE in misspecified settings where θ∗ does not lie in Mn.

The quantity δn(μ) therefore crucially controls the risk of the isotonic LSE. The goal of this paper is to explicitly determine δn(μ) for every n≥1 under the additional assumption that Z is exchangeable. Specifically, under the assumption of exchangeability, we show in Corollary 3.3 that, for all n,

where Hn:=1+12+⋯+1n is the nth harmonic number and ρ=Cor(Z1,Z2) is the pairwise correlation. Combined with (1.1), our result provides a sharp non-asymptotic bound on the risk of isotonic regression for any exchangeable noise vector. In the special case when Z1,…,Zn are i.i.d. with zero mean and unit variance, ρ=0 and thus (1.2) gives:

Here η is the common distribution of the independent variables Z1,…,Zn.

holds for every closed convex cone K⊆Rn where νk(K) is the kth intrinsic volume of K. When K=Mn is the monotone cone, the right hand side in equation (1.4) can be shown to be equal to Hn by using the fact that the generating function s↦∑nk=0skνk(Mn) can be computed in closed form. Amelunxen et al. [2] used the theory of finite reflection groups [7] to obtain the exact expression for this generating function. However, the exact expression for ∑nk=0skνk(Mn) can already be found in the classical literature on isotonic regression (see Theorem 2.4.2 in Roberston et al. [16] and references therein).

The above proof does not work for non-Gaussian η mainly because the expression (1.4) does not hold for general η. In fact, the best available result on δn(⊗ni=1η) for non-Gaussian η is in equation (2.11) of Zhang [18], who proved the asymptotic result:

This bound gives the right behavior as the right hand side of equation (1.3) but only as n→∞. We improve this result by proving for every n≥1 that δn(⊗ni=1η) is always equal to the nth harmonic number Hn for every probability measure η having mean 0 and variance 1.

We prove (1.2) by developing a precise characterization of the marginal distribution of each individual component (ΠMn(Z))k of ΠMn(Z). Specifically, as long as Z is exchangeable, we show in Theorem 2.2 that (ΠMn(Z))k has the same distribution as ¯Z(k), the kth order statistic of the running averages ¯Zj=Z1+⋯+Zjj. We prove Theorem 2.2 in Section 2, using a characterization of the components of the isotonic LSE as the left-hand slopes of the greatest convex minorant of the random walk with increments Z1,…,Zn. This result and its continuous-time analogue may be of independent interest outside the study of isotonic regression, so in Section 2 we also address consequences for the greatest convex minorant of a stochastic process with exchangeable increments. The order statistics of the running averages {¯Zk}nk=1 can be fairly complicated even when Z is Gaussian; however, Theorem 2.2 easily implies results such as (1.2). In Section 3, we detail some risk calculations for isotonic regression and its variants which all follow from Theorem 2.2.

and linearly interpolated between integers. Let

For any vector Z, the isotonic LSE ΠMn(Z) is given by the left-hand slopes of the greatest convex minorant of the cumulative sum diagram. For all k=1,…,n

For the remainder of this section let

denote the left-hand slope of the GCM at k, so Δ=(Δ1,…,Δn) is equal to ΠMn(Z) by the lemma. In particular, when k=1 we have Δ1=min1≤v≤nSvv. When k=n, we have Δn=max0≤u<nSn−Sun−u, and if (Zn,…,Z1)d=(Z1,…,Zn) then Δnd=max1≤u≤nSuu. Our next result generalizes this observation, showing that the kth slope Δk is equal in distribution to the kth smallest running average if Z is exchangeable.

As before, let Sk denote the kth partial sum. Let M be the last argmin of the sequence {Si}ni=0, and let N be the amount of time the walk is non-positive N:=∑ni=11(Si≤0). We will use Corollary 11.14 of Kallenberg [12], due to Sparre-Andersen, which says Md=N as long as Z is exchangeable.

Note that the slope of the GCM switches from non-positive to positive at time M, since the horizontal line with intercept SM minorizes the GCM and touches it at time M. Hence, no matter the sequence of increments Zi, there is the identity of events

Also, for the time N that the walk is non-positive, since Si≤0 if and only if ¯Zi≤0, there is the identity of events

The equality in distribution Md=N then implies

The proof of Theorem 2.2 has a straightforward generalization to the setting where S:[0,1]→R is a continuous-time stochastic process. Knight [13] showed that the analogous distributional identity Md=N holds when S has exchangeable increments and S(0)=0. Hence, by a similar proof, we find that the slope Δ(p) of the greatest convex minorant of S at time p∈[0,1] has the same distribution as the pth percentile point of the occupation measure for the process (S(t)t,0≤t≤1). We record this result as the following corollary.

Let S denote a real-valued càdlàg stochastic process on [0,1] with exchangeable increments, such that S(0)=0. Define Δ(t) as the slope of the greatest convex minorant of S at t, and let F:R→[0,1] denote the (random) cdf associated with the occupation measure of (S(t)t,0≤t≤1),

where λ denotes Lebesgue measure. Then

See Abramson et al. [1] for a general study of convex minorants of random walks and processes with exchangeable increments. In the special cases where S is a standard Brownian motion or Brownian bridge on the unit interval, Carolan & Dykstra [6] derive the distribution of the slope Δ(p), jointly with the process S(p) and its convex minorant at p, for a fixed value p∈[0,1]. Given our corollary, their explicit formula for the slope Δ(p) provides the distribution of F−1(p), giving new information about the occupation measure of (S(t)t,0≤t≤1) for Brownian motion and Brownian bridge. The distribution of the pth percentile point of the occupation measure for (S(t),0≤t≤1) has been obtained under the same generality as Corollary 2.3: see the introduction of Dassios [8] and references therein.

Since the identity of Theorem 2.2 holds marginally, it allows us to simplify expectations of functions that are additive in the components of ΠMn(Z). As long as Z is exchangeable,

Viewed through its graphical representation, Δk=C(k)−C(k−1) is the left-derivative of the GCM C at k, so when the power p=1, equation (3.2) yields the discrete arc-length formula

Closely related to this formula is the identity of Spitzer & Widom [17], which takes ~Z1,…,~Zn

to be a sequence of i.i.d. random variables in

R2 (or the complex plane C) with finite variance. If ~Sk=∑ki=1~Zi is the partial sum and ~Ln is the length of the perimeter of the convex hull conv(0,~S1,…,~Sn), then

These formulas connect the geometry of the convex hull of a random walk to the magnitudes of the running means.

Consider the case when p=2. Since Z is exchangeable, every pair of components has the same correlation ρ. If we further assume Z1 has zero mean and unit variance, the right hand side of equation (3.2) can be computed explicitly

Summing over k yields our next result.

This result should be contrasted with other distribution-free identities, namely

provided Z has i.i.d. components with zero mean and unit variance. In particular, suppose we observe Y=θ∗+σZ where Z has i.i.d. components with zero mean and unit variance, but it turns out that θ∗=c1n is constant. If we know θ∗ is constant, we can estimate it by a constant sequence ¯Y1n and pay a constant price σ2 in total risk. If we know nothing about the structure of θ∗ and use ^θ=Y, the risk σ2n is quite large by comparison. The monotone sequence estimate resides in the middle, with a much smaller risk of σ2Hn and knowledge only about the relative order. We explained in Section 1 how risk calculations when θ∗=0 generalize to MSE bounds that are sharp in the low noise limit for arbitrary θ∗. For example, when θ∗∈Mn has k constant pieces, then (1.1), Corollary 3.3 and the fact that Hl≤log(el) for every l≥1 imply that

whenever Z1,…,Zn are i.i.d. with mean zero and unit variance. Also if θ∗∈Rn is not necessarily in Mn, then Corollary 3.3, together with the results of [3], implies that

where k(θ) is the number of constant pieces of the vector θ. These formulae (with the leading constant of 1 in front of the kσ2nlogenk term on the right hand side) were previously only known when the distribution of Z1,…,Zn was standard Gaussian.

Define the Lp-risk of the isotonic LSE

so that R(^θ,θ∗)=R(2)(^θ,θ∗). We can similarly employ Theorem 2.2 to explicitly calculate the Lp-risk of the isotonic LSE ^θ when θ∗ is constant and Z is Gaussian:

Corollary 3.4 should similarly be contrasted with the following identities when Z∼N(0,In) :

respectively. In particular, when p>2, the bound Hn,p/2<∑∞k=11kp/2<∞ holds for all n, which is to say E∥ΠMn(Z)∥pp is bounded when p>2 whereas E∥Z∥pp grows without bound as n grows.

When θ∗ is constant and Z∼N(0,In), the Lp risk of isotonic regression is

where f∗:[0,1]→R is non-decreasing. We observe Y, a noisy version of θ∗, and calculate ^θ by projecting Y onto the monotone cone. The function estimate ^f is defined by ^f(kn)=^θk and linearly interpolated between design points. Here, as before, the dependence on n in θ∗∈Mn is suppressed, but now we are interested in the behavior of isotonic least squares ^f(p) at a fixed point p∈[0,1] as n→∞.

Define the partial sum process S(n):[0,1]→R by S(n)(k/n)=Y1+⋯+Yk√n, linearly interpolated between design points. When the function f∗≡c is constant, the quantity

For any exchangeable noise vector Z,

Furthermore, if Z is symmetric with unit variance, the generalized statistical dimension of the monotone cone is

where ρ is the pairwise correlation.

Equation (3.8) is also shown in Amelunxen et al. [2] in the special case Z∼N(0,In) using the theory of finite reflection groups. The identity (3.7) allows us to show equation (3.8) for a much wider variety of noise vectors, and as before also allows us to obtain relations for the expected Lp norms of the projection of the noise vector. All of our exact formulae follow from the distributional identity in Theorem 2.2, which exploits the geometric characterization of the isotonic LSE in Lemma 2.1. An interesting open question is whether similar characterizations— such as for convex regression [10]—may yield exact non-asymptotic risk calculations in other shape-constrained estimation problems.