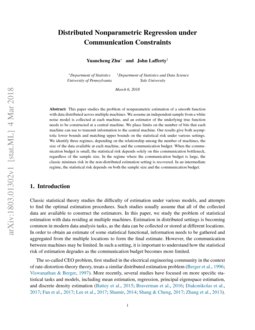 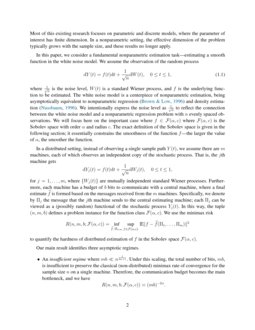 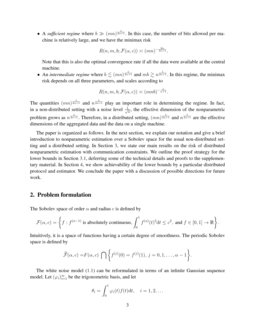 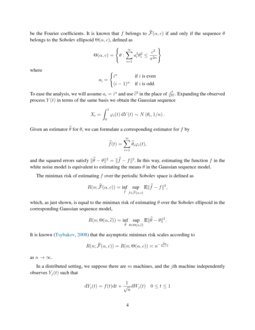 We investigate whether in a distributed setting, adaptive estimation of ...
Botond Szabo, et al. ∙

We formulate the notion of minimax estimation under storage or communica...
Yuancheng Zhu, et al. ∙

Classic statistical theory studies the difficulty of estimation under various models, and attempts to find the optimal estimation procedures. Such studies usually assume that all of the collected data are available to construct the estimators. In this paper, we study the problem of statistical estimation with data residing at multiple machines. Estimation in distributed settings is becoming common in modern data analysis tasks, as the data can be collected or stored at different locations. In order to obtain an estimate of some statistical functional, information needs to be gathered and aggregated from the multiple locations to form the final estimate. However, the communication between machines may be limited. For instance, there may be a communication budget that limits how much information can be transmitted. In this setting, it is important to understand how the statistical risk of estimation degrades as the communication budget becomes more limited.

treating mean estimation, regression, principal eigenspace estimation, discrete density estimation and other problems. Most of this existing research focuses on parametric and discrete models, where the parameter of interest has a finite dimension. While there are also studies of nonparametric problems and models

In this paper, we consider a fundamental nonparametric estimation task—estimating a smooth function in the white noise model. We assume observation of the random process

where 1√n is the noise level, W(t) is a standard Wiener process, and f is the underlying function to be estimated. The white noise model is a centerpiece of nonparametric estimation, being asymptotically equivalent to nonparametric regression and density estimation (Brown & Low, 1996; Nussbaum, 1996). We intentionally express the noise level as 1√n to reflect the connection between the white noise model and a nonparametric regression problem with n evenly spaced observations. We focus on the important case where the regression function lies in the Sobolev space F(α,c) of order α and radius c; the exact definition of this function space is given in the following section.

In a distributed setting, instead of observing a single sample path Y(t), we assume there are m machines, each of which observes an independent copy of the stochastic process. That is, the jth machine gets

for j=1,…,m where Wj(t)’s are mutually independent standard Wiener processes. Furthermore, each machine has a budget of b bits to communicate with a central machine, where a final estimate ^f is formed based on the messages received from the m machines. Specifically, we denote by Πj the message that the jth machine sends to the central estimating machine; each Πj can be viewed as a (possibly random) functional of the stochastic process Yj(t). In this way, the tuple (n,m,b) defines a problem instance for the function class F(α,c). We use the minimax risk

to quantify the hardness of distributed estimation of f in the Sobolev space F(α,c).

The main contribution of the paper is to identify the following three asymptotic regimes.

Together, these three regimes give a sharp characterization of the statistical behavior of distributed nonparametric estimation for the Sobolev space F(α,c) under communication constraints, covering the full range of parameters and problem settings. The Bayesian framework adopted in this paper to establish the lower bounds is different from the techniques used in previous work, which typically rely on Fano’s lemma and the strong data processing inequality. Finally, we note that an essentially equivalent set of minimax convergence rates is obtained in a simultaneously and independently written paper by Szabo & van Zanten (2018).

The paper is organized as follows. In the next section, we explain our notation and give a brief introduction of nonparametric estimation over a Sobolev space for the usual non-distributed setting and a distributed setting. In Section 3, we state our main results on the risk of distributed nonparametric estimation with communication constraints. We outline the proof strategy for the lower bounds in Section 3.1, deferring some of the technical details and proofs to the supplementary material. In Section 4, we show achievability of the lower bounds by a particular distributed protocol and estimator. We conclude the paper with a discussion of possible directions for future work.

Intuitively, it is a space of functions having a certain degree of smoothness. The periodic Sobolev space is defined by

The white noise model (1.1) can be reformulated in terms of an infinite Gaussian sequence model. Let (φi)∞i=1 be the trigonometric basis, and let

be the Fourier coefficients. It is known that f belongs to ~F(α,c) if and only if the sequence θ belongs to the Sobolev ellipsoid Θ(α,c), defined as

To ease the analysis, we will assume ai=iα and use ~c2 in the place of c2π2α. Expanding the observed process Y(t) in terms of the same basis we obtain the Gaussian sequence

Given an estimator ^θ for θ, we can formulate a corresponding estimator for f by

and the squared errors satisfy ∥^θ−θ∥2=∥^f−f∥2. In this way, estimating the function f in the white noise model is equivalent to estimating the means θ in the Gaussian sequence model.

which, as just shown, is equal to the minimax risk of estimating θ over the Sobolev ellipsoid in the corresponding Gaussian sequence model,

It is known (Tsybakov, 2008) that the asymptotic minimax risk scales according to

In a distributed setting, we suppose there are m machines, and the jth machine independently observes Yj(t) such that

for j=1,…,m. Equivalently, if we express this in terms of the Gaussian sequence model, the jth machine observes data

We further assume there is a central machine where a final estimator needs to be calculated based on messages received from the m local machines. Local machine j sends a message of length bj bits to the central machine; we denote this message by Πj. Then Πj=Πj(X1j,X2j,…) can be viewed as a (possibly random) mapping from R∞ to {1,2,…,2bj}. The final estimator ^θ is then a functional of the collection of messages. The mechanism can be summarized by the following diagram:

We note here that for simplicity we consider only one round of communication. A variant is to allow multiple rounds of communication, for which the local machines can get access to a “blackboard” where the central machine broadcasts information back to the distributed nodes.

Here Γ represents either Γind or Γsum. In fact, it will be clear that the minimax risks under the two types of constraints are asymptotically equivalent.

In what follows, we will work in an asymptotic regime where the tuple (n,m,b) goes to infinity while satisfying some relationships, and show how the minimax risk for the distributed estimation problem scales accordingly. The main result can be summarized in the following theorem.

To put the result more concisely, we can write

There are multiple ways to interpret this main result and here we illustrate one of the many possibilities. Fixing m and b, and viewing the minimax risk as a function of n, the sample size on each machine, we have

This work can be viewed as a natural generalization of Zhu & Lafferty (2017), where the authors consider estimation over a Sobolev space with a single remote machine and communication constraints. Specifically, by setting m=1 we recover the main results in Zhu & Lafferty (2017) up to some constant factor. However, with more than one machine, it is non-trivial to uncover the minimax convergence rate, especially in the intermediate regime.

3.1 Proof of the lower bounds

We now proceed to outline the proof of the lower bounds in Theorem 3.1. Most existing results rely on Fano’s lemma and the strong data processing inequality (Zhang et al., 2013a; Braverman et al., 2016). An extension of this information-theoretic approach is used by Szabo & van Zanten (2018) in the nonparametric setting to obtain essentially the same lower bounds as we establish here. However, we develop the Bayesian framework for deriving minimax lower bounds (Johnstone, 2017), circumventing the need for both Fano’s lemma and the strong data processing inequality, and associating the lower bounds with the solution of an optimization problem.

We consider a prior distribution π(θ) asymptotically supported on the parameter space Θ. For any estimator ^θ that follows the distributed protocol, we have

That is, the worst-case risk associated with ^θ is bounded from below by the integrated risk. We specifically consider the Gaussian prior distribution θi∼N(0,σ2i) for i=1,…,ℓ, and P(θi=0)=1 for i=ℓ+1,…, where the sequence σi satisfies ∑ℓi=1i2ασ2i≤c2. We make (3.1) clear in the following lemma, whose proof can be found in the supplementary material.

The next step is to lower bound the integrated risk ∫ΘEθ[∥^θ−θ∥2]dπ(θ). Lemma 3.2 is derived from a result that appears in (Wang et al., 2010); for completeness we include the proof in the supplementary material.

Combining the Lemma 3.1 and 3.2, we have the following asymptotic lower bound

Next, based on the optimization problem formulated above, we work under three different regimes, and derive three forms of lower bounds of the minimax risk. The key is to choose appropriate sequences of prior variances

σ2i for different regimes, as we shall illustrate.

In nonparametric estimation theory, it is known that for the Gaussian sequence model Xi∼N(θ,1n) for i=1,…,∞ with θ∈Θ(α,c), the optimal scaling of the ℓ2 risk is n−2α2α+1, and this can be achieved by truncating the sequence at i=O(n12α+1). That is, the estimator

has worst-case risk supθ∈Θ(α,c)Eθ∥^θ−θ∥2≍n−2α2α+1. We are going to build on this simple but rate-optimal estimator in our distributed protocol. But before carefully defining and analyzing the protocol, we first give a high-level idea of how it is designed.

In our distributed setting, we have a total budget of mb bits to communicate from the local machines to the central machine, which means that we can transmit O(mb)random variables to a certain degree of precision.

In the first regime where we have mb≲n12α+1, the communication budget is so small that the total number of bits is smaller than the effective dimension for the noise level 1/n. In this case, we let each machine transmit information regarding a unique set of O(b) components of θ. Thus, at the central machine, we can decode and obtain information about the first O(mb) components of θi. This is equivalent to truncating a centralized Gaussian sequence at i=O(mb), and gives us a convergence rate of (mb)−2α.

In the second regime (b≪(mn)12α+1 and mb≫n12α+1), we have a larger budget at our disposal, and can thus afford to transmit more than one random variable containing information about θi. Suppose that for a specific i we quantize and transmit Xij for k different values of j, namely at k different machines. The budget of O(mb) random variables will allow us to acquire information about the first O(mbk) components of θ. When aggregating at the central machine, we have Zi∼N(θi,1nk) for i=1,…,O(mbk), and no information about θi for i≥O(mbk). Now consider the effect of choosing different values of k. In choosing a smaller k, we will be able to estimate more components of θ, but each at a lower accuracy. On the other hand, a larger k leads to fewer components being estimated, but with smaller error. We know from nonparametric estimation theory that the tradeoff is optimized when (kn)12α+1≍mbk. This gives us the optimal choice k≍(mb)2α+12α+2n−12α+2, with risk scaling as (mbn)−αα+1.

In the last regime, we have b≳(mn)12α+1. In this case, the number of bits available at each machine is larger than the effective dimension associated with the global noise level 1mn. We simply quantize and transmit the first O(mn)12α+1 of Xij from each machine to the central machine, where we decode and simply average the received random variables.