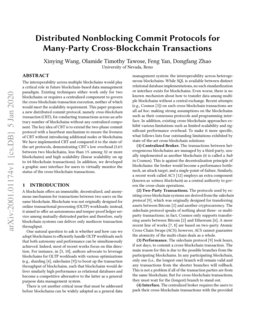 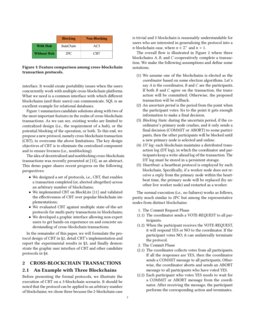 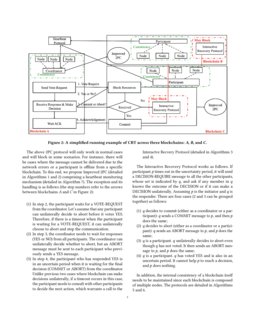 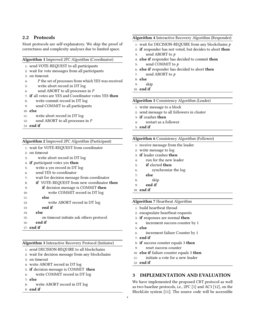 A blockchain offers an immutable, decentralized, and anonymous mechanism for transactions between two users on the same blockchain. Blockchain was not originally designed for online transactional processing (OLTP) workloads; instead, it aimed to offer an autonomous and temper-proof ledger service among mutually-distrusted parties and therefore, early blockchain systems can deliver only mediocre transaction throughput.

One natural question to ask is whether and how can we adopt blockchains to efficiently handle OLTP workloads such that both autonomy and performance can be simultaneously achieved. Indeed, most of recent works focus on this direction. For instance, in [mhindi_vldb19, jwang_nsdi19], authors advocate to leverage blockchains for OLTP workloads with various optimizations (e.g., sharding [hdang_sigmod19], sidechains [sidechain]) to boost up the transaction throughput of blockchains, such that blockchains would deliver similarly high performance as relational databases and become a competitive alternative to the latter as a general-purpose data management system.

There is yet another critical issue that must be addressed before blockchains can be widely adopted as a general data management system: the interoperability across heterogeneous blockchains. While SQL is available between distinct relational database implementations, no such standardization or interface exists for blockchains. Even worse, there is no known mechanism about how to transfer data among multiple blockchains without a central exchange. Recent attempts (e.g., Cosmos [cosmos]) on such cross-blockchain transactions are all ad hoc: making strong assumptions on the blockchains such as their consensus protocols and programming interface. In addition, existing cross-blockchain approaches exhibit various limitations such as limited scalability and significant performance overhead. To make it more specific, what follows lists four outstanding limitations exhibited by state-of-the-art cross-blockchain solutions:

(1) Centralized Broker. The transactions between heterogeneous blockchains are managed by a third-party, usually implemented as another blockchain (it is called a hub in Cosmos). This is against the decentralization principle of blockchains: the broker would become a performance bottleneck, an attack target, and a single-point-of-failure. Similarly, a recent work called AC3 [vzakhary_arxiv19] employs an extra component (known as witness blockchain) as a central authority to govern the cross-chain operations.

(2) Two-Party Transactions. The protocols used by existing cross-blockchain systems are derived from the sidechain protocol [sidechain], which was originally designed for transferring assets between Bitcoin [bitcoin] and another cryptocurrency. The sidechain protocol speaks of nothing about three- or multi-party transactions; in fact, Cosmos only supports transferring assets between Bitcoin [bitcoin] and Ethereum [ethereum]. A more recent line of works [maurice_vldb19, mherlihy_podc18] are based on two-party Atomic Cross-Chain Swaps (ACS); however, ACS cannot guarantee the atomicity of the multi-chain deals as a whole.

(3) Performance. The sidechain protocol [sidechain] took hours, if not days, to commit a cross-blockchain transaction. The main reason for this is due to the possible branches from the participating blockchains. In any participating blockchain, only one (i.e., the longest one) branch will remain valid and any transactions from the shorter branches will rollback. This is not a problem if all of the transaction parties are from the same blockchain; But for cross-blockchain transactions, they must wait for the (longest) branch to stand out.

(4) Interface. The centralized broker requires the users to pack their cross-blockchain transactions with the provided interface. It would create portability issues when the users concurrently work with multiple cross-blockchain platforms. What we need is a common interface with which different blockchains (and their users) can communicate. SQL is an excellent example for relational databases.

Figure 1 summarizes candidate solutions along with two of the most important features in the realm of cross-blockchain transactions. As we can see, existing works are limited to centralized design (i.e., the requirement of a hub), or the potential blocking of the operation, or both. To this end, we propose a new protocol, namely cross-blockchain transaction (CBT), to overcome the above limitations. The key design objectives of CBT is to eliminate the centralized component and to ensure liveness (i.e., nonblocking).

The idea of decentralized and nonblocking cross-blockchain transactions was recently presented at [dzhao_cidr20], as an abstract. This demo paper shares recent progress on the following perspectives:

In the remainder of this paper, we will formulate the protocol design of CBT in §2, detail CBT’s implementation and report the experimental results in §3, and finally demonstrate the graphic user interface of CBT and other candidate protocols in §4.

2.1. An Example with Three Blockchains

Before presenting the formal protocols, we illustrate the execution of CBT on a 3-blockchain scenario. It should be noted that the protocol can be applied to an arbitrary number of blockchains; we chose three because the 2-blockchain case is trivial and 3-blockchain is reasonably understandable for users who are interested in generalizing the protocol into a n-blockchain case, where n∈Z+ and n>1.

The overall flow is illustrated in Figure 2 where three blockchains A, B, and C cooperatively complete a transaction. We make the following assumptions and define some notations.

The normal execution (i.e., no failures) works as follows, pretty much similar to 2PC but among the representative nodes from distinct blockchains:

The above 2PC protocol will only work in normal cases and will block in some scenarios. For instance, there will be cases where the message cannot be delivered due to the network errors or a participant is offline from a specific blockchain. To this end, we propose Improved 2PC (detailed in Algorithms 1 and 2) comprising a heartbeat monitoring mechanism (detailed in Algorithm 7). The exception and its handling is as follows (the step numbers refer to the arrows between blockchains A and C in Figure 2):

The Interactive Recovery Protocol works as follows. If participant p times out in the uncertainty period, it will send a DECISION-REQUIRE message to all the other participants, whose set is indicated by q, and ask if any member in q knows the outcome of the DECISION or if it can make a DECISION unilaterally. Assuming p is the initiator and q is the responder. There are four cases (2 and 3 can be grouped together) as follows:

In addition, the internal consistency of a blockchain itself needs to be maintained since each blockchain is composed of multiple nodes. The protocols are detailed in Algorithms 5 and 6.

Most protocols are self-explanatory. We skip the proof of correctness and complexity analyses due to limited space.

We have implemented the proposed CBT protocol as well as two baseline protocols, i.e., 2PC [2pc] and AC3 [vzakhary_arxiv19], on the BlockLite system [xwang_cloud19]. The source code will be accessible at: https://github.com/hpdic/cbt. The source code is written with Java of JDK 1.7. The code base comprises about 5,190 lines of code. The code base has three major components: (i) the blockchain implementation including protocols and utilities; (ii) the network component including the communications among coordinator and participants; and (iii) the graphic user interface developed with Java Swing.

The second experiment evaluates CBT’s scalability: we fixed the number of blockchains as two and submit different numbers of transactions ranging from 60 to 480. The raw completion time is reported on the left y-axis in Figure 4. The scaling factor, defined as t/t0w/w0, where t and w indicate the running time and workload at a specific scale, and t0 and w0 indicate both at the baseline scale. In this experiment, for instance, t0=38 and w0=60. We thus observe a closely linear scalability of CBT: at 120, 240, and 480 scales, the scaling factor is less than 3% off the original, as shown on the right y-axis of Figure 4.

The third experiment compares CBT with two state-of-the-art protocols in cross-blockchain transactions: 2PC [2pc] and AC3 [vzakhary_arxiv19]. For 2PC, we set it up as the “ideal case” where no failures take place during the experiment; it is the upper-bound performance one can best expect from 2PC. The point is to show the overhead incurred by our proposed CBT compared to such upper-bound performance. For AC3, we arbitrarily select one blockchain as the “hub”, or “witness blockchain” as in the literature. Because of AC3’s centralized hub, we expect the performance and scalability will be affected at some point, e.g., larger number of blockchains. We fix the workload of 640 transactions and vary the number of blockchains between 2 and 64. The results are reported in Figure 5. Both 2PC and CBT show (almost) linear scalability because no centralized component exists in the system. CBT incurs insignificant overhead (compared with baseline 2PC) at small/medium scales: 3.6% – 4% on 2–32 blockchains; then the overhead is negligible on 64 blockchains. Compared with 2PC and CBT, AC3 starts to fall behind on eight blockchains due to its “hub” design. Interestingly, AC3’s performance seems to follow a downward ladder trend with respect to the increasing numbers of participating blockchains: {2} → {4,8,16} → {32,64}. More investigation to this phenomena is beyond the scope of this paper and we leave this as an open question to the community.

We will demonstrate our open-source implementation of various cross-blockchain transaction protocols using the a graphical user interface. Again, the source code can be downloaded from Github:

https://github.com/hpdic/cbt. This section will select some of the key steps in running the program.

When the user first launches CBT, she will specify the number of blockchains and whether a hub is available, as shown in Figure 6. For instance, here we set three blockchains: one coordinator (also the hub) and two participants.

After the user specifies the structure of the cluster of blockchains, she can submit transactions to the system at the control panel of the coordinator, as shown in Figure 8. The screenshot shows that the user submits five transactions to a 3-blockchain cluster (on the top-left panel). The top-right panel will report the number of messages passed during the transaction; Figure 3 is one such example. The bottom panel will output detailed log information: for instance, if one node crashes, it will be reported here.

In the future “full version” of this paper, we will extend this work from the following perspectives. We will provide a theoretical proof and analysis of the protocols, mainly on the safety (correctness) and liveness (nonblocking) properties. We are currently working on scaling the CBT protocols to tens of hundreds of nodes. Last but not least, we are working on a set of primitives, extended from SQL, to allow RDBMS users to switch to blockchain-based general-purpose data management systems backed by CBT protocols.