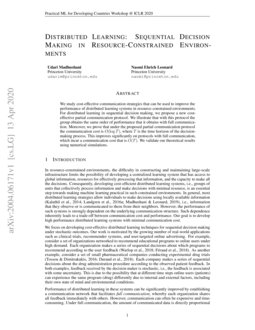 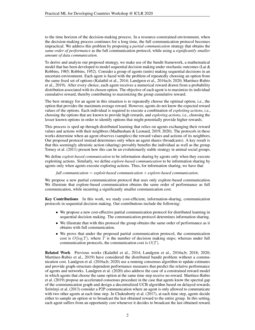 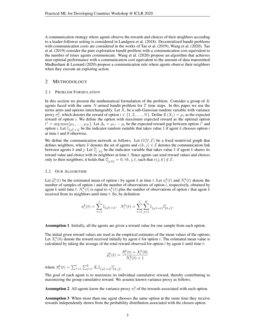 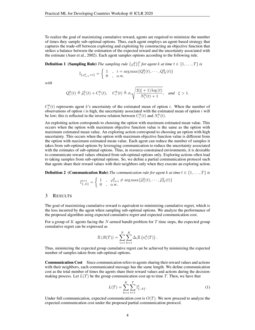 In resource-constrained environments, the difficulty in constructing and maintaining large-scale infrastructure limits the possibility of developing a centralized learning system that has access to global information, resources for effectively processing that information, and the capacity to make all the decisions. Consequently, developing cost-efficient distributed learning systems, i.e., groups of units that collectively process information and make decisions with minimal resource, is an essential step towards making machine learning practical in such constrained environments. In general, most distributed learning strategies allow individuals to make decisions using locally available information

(kalathil2014decentralized; landgren2016distributed; madhushani2019heterogeneous), i.e., information that they observe or is communicated to them from their neighbors. However, the performance of such systems is strongly dependent on the underlying communication structure. Such dependence inherently leads to a trade-off between communication cost and performance. Our goal is to develop high performance distributed learning systems with minimal communication cost.

We focus on developing cost-effective distributed learning techniques for sequential decision making under stochastic outcomes. Our work is motivated by the growing number of real-world applications such as clinical trials, recommender systems, and user-targeted online advertising. For example, consider a set of organizations networked to recommend educational programs to online users under high demand. Each organization makes a series of sequential decisions about which programs to recommend according to the user feedback (warlop2018fighting; feraud2018decentralized). As another example, consider a set of small pharmaceutical companies conducting experimental drug trials (tossou2016algorithms; Durand2018ContextualBF). Each company makes a series of sequential decisions about the drug administration procedure according to the observed patient feedback. In both examples, feedback received by the decision maker is stochastic, i.e., the feedback is associated with some uncertainty. This is due to the possibility that at different time steps online users (patients) can experience the same program (drug) differently due to internal and external factors, including their own state of mind and environmental conditions.

To derive and analyze our proposed strategy, we make use of the bandit framework, a mathematical model that has been developed to model sequential decision making under stochastic outcomes (laiRobbins; robbins1952some). Consider a group of agents (units) making sequential decisions in an uncertain environment. Each agent is faced with the problem of repeatedly choosing an option from the same fixed set of options (kalathil2014decentralized; landgren2016distributed; landgren2016distributedCDC; landgren2020distributed; martinez2019decentralized)

The best strategy for an agent in this situation is to repeatedly choose the optimal option, i.e., the option that provides the maximum average reward. However, agents do not know the expected reward values of the options. Each individual is required to execute a combination of exploiting actions, i.e., choosing the options that are known to provide high rewards, and exploring actions, i.e., choosing the lesser known options in order to identify options that might potentially provide higher rewards.

This process is sped up through distributed learning that relies on agents exchanging their reward values and actions with their neighbors (madhushani2019heterogeneous; madhushani2020dynamic). The protocols in these works determine when an agent observes (samples) the reward values and actions of its neighbors. Our proposed protocol instead determines only when an agent shares (broadcasts). A key result is that this seemingly altruistic action (sharing) provably benefits the individual as well as the group. torney2011signalling present how this can be an evolutionarily stable strategy in animal social groups.

In this work, we study cost-efficient, information-sharing, communication protocols in sequential decision making. Our contributions include the following:

use a running consensus algorithm to update estimates and provide graph-structure-dependent performance measures that predict the relative performance of agents and networks.

landgren2020distributed also address the case of a constrained reward model in which agents that choose the same option at the same time step receive no reward. martinez2019decentralized propose an accelerated consensus procedure in the case that agents know the spectral gap of the communication graph and design a decentralized UCB algorithm based on delayed rewards. szorenyi2013gossip consider a P2P communication where an agent is only allowed to communicate with two other agents at each time step. In chakraborty2017coordinated, at each time step, agents decide either to sample an option or to broadcast the last obtained reward to the entire group. In this setting, each agent suffers from an opportunity cost whenever it decides to broadcast the last obtained reward. A communication strategy where agents observe the rewards and choices of their neighbors according to a leader-follower setting is considered in landgren2018social. Decentralized bandit problems with communication costs are considered in the works of tao2019collaborative; Wang2020Distributed. tao2019collaborative consider the pure exploration bandit problem with a communication cost equivalent to the number of times agents communicate. Wang2020Distributed propose an algorithm that achieves near-optimal performance with a communication cost equivalent to the amount of data transmitted. madhushani2020dynamic propose a communication rule where agents observe their neighbors when they execute an exploring action.

In this section we present the mathematical formulation of the problem. Consider a group of K agents faced with the same N-armed bandit problem for T time steps. In this paper we use the terms arms and options interchangeably. Let Xi

be a sub-Gaussian random variable with variance proxy

be the indicator random variable that takes value 1 if agent

k chooses option i at time t and 0 otherwise.

We define the communication network as follows. Let G(V,E) be a fixed nontrivial graph that defines neighbors, where V denotes the set of agents and e(k,j)∈E denotes the communication link between agents k and j. Let It{⋅,k} be the indicator variable that takes value 1 if agent k shares its reward value and choice with its neighbors at time t. Since agents can send reward values and choices only to their neighbors, it holds that It{j,k}=0,∀k,j,t, such that e(j,k)∉E.

Initially, all the agents are given a reward value for one sample from each option.

The initial given reward values are used as the empirical estimates of the mean values of the options. Let Xki(0) denote the reward received initially by agent k for option i. The estimated mean value is calculated by taking the average of the total reward observed for option i by agent k until time t:

All agents know the variance proxy σ2i of the rewards associated with each option.

When more than one agent chooses the same option at the same time they receive rewards independently drawn from the probability distribution associated with the chosen option.

To realize the goal of maximizing cumulative reward, agents are required to minimize the number of times they sample sub-optimal options. Thus, each agent employs an agent-based strategy that captures the trade-off between exploring and exploiting by constructing an objective function that strikes a balance between the estimation of the expected reward and the uncertainty associated with the estimate (auer2002finite). Each agent samples options according to the following rule.

For a group of K agents facing the N-armed bandit problem for T time steps, the expected group cumulative regret can be expressed as

The proof of Lemma 1 follows from Lemma 3 in the paper madhushani2020dynamic. A detailed proof is provided in Appendix A.

We provide numerical simulation results illustrating the performance of the proposed sampling rule and the communication rule. For all the simulations presented in this section, we consider a group of 100 agents (K=100) and 10 options (N=10) with Gaussian reward distributions. We let the expected reward value of the optimal option be 11, the expected reward of all other options be 10, and the variance of all options be 1. We let the communication network graph G be complete. We provide results with 1000 time steps (T=1000) using 1000 Monte Carlo simulations with ξ=1.01.

The expected communication cost can be given as

To analyze the expected number of exploring actions, we use

We first upper bound the expected number of times agent k broadcasts rewards and actions to its neighbors until time T when it samples a sub-optimal option:

This follows from the fact that we only sample sub-optimal options logarithmically with time (see Lemma 2 in madhushani2020dynamic).

Next we analyze the expected number of times agent k broadcasts rewards and actions to its neighbors until time T when it samples the optimal option. Note that ∀i,k,t we have

From Lemma 1 in madhushani2020dynamic we get

Now we proceed to upper bound the second summation term of (3). Note that for some βki(t)>0 we have

Let i be the sub-optimal option with highest estimated expected reward for agents k at time t. Then we have i=argmax{ˆμk1(t),⋯,ˆμkN(t)} and i≠i∗. If agent k chooses option i∗ at time t+1 we have Qki∗(t)>Qki(t). Thus we have ˆμki(t)>ˆμki∗(t) and Cki(t)<Cki∗(t). Then for βki(t)=8σi∗(ξ+1)Δ2ilogt we have

The last equality follows from Lemma 1 by madhushani2020dynamic.