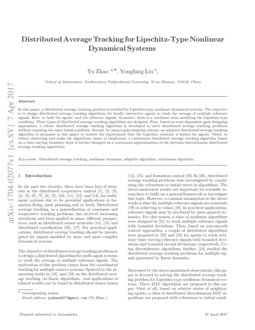 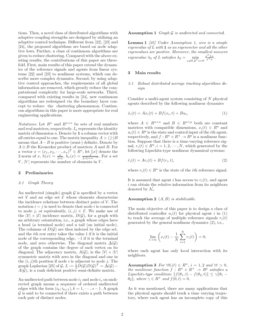 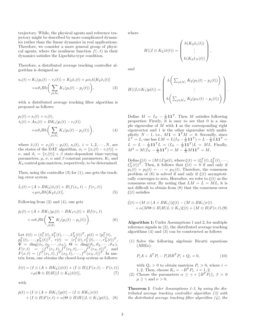 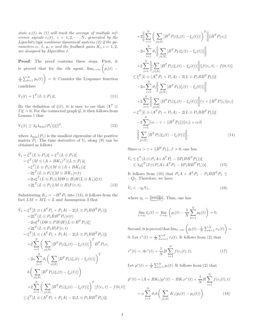 In the past two decades, there have been lots of interests in the distributed cooperative control [1], [2], [3], [4], [5], [6], [7], [8], [9], [10], [11], [12], and [13], for multi-agent systems due to its potential applications in formation flying, path planning and so forth. Distributed average tracking, as a generalization of consensus and cooperative tracking problems, has received increasing attentions and been applied in many different perspectives, such as distributed sensor networks [14], [15] and distributed coordination [16], [17]. For practical applications, distributed average tracking should be investigated for signals modeled by more and more complex dynamical systems.

Motivated by the above mentioned observations, this paper is devoted to solving the distributed average tracking problem for Lipschitz-type nonlinear dynamical systems. Three DAT algorithms are proposed in this paper. First of all, based on relative states of neighboring agents, a class of distributed discontinuous DAT algorithms are proposed with robustness to initial conditions. Then, a novel class of distributed algorithms with adaptive coupling strengths are designed by utilizing an adaptive control technique. Different from [22], [23] and [24], the proposed algorithms are based on node adaptive lows. Further, a class of continuous algorithms are given to reduce chattering. Compared with the above existing results, the contributions of this paper are three-fold. First, main results of this paper extend the dynamics of the reference signals and agents from linear systems [22] and [23] to nonlinear systems, which can describe more complex dynamics. Second, by using adaptive control approaches, the requirements of all global information are removed, which greatly reduce the computational complexity for large-scale networks. Third, compared with existing results in [24], new continuous algorithms are redesigned via the boundary layer concept to reduce the chattering phenomenon. Continuous algorithms in this paper is more appropriate for real engineering applications.

Notations: Let Rn and Rn×n be sets of real numbers and real matrices, respectively. In

represents the identity matrix of dimension

a column vector with all entries equal to one. The matrix inequality

An undirected (simple) graph G is specified by a vertex set V and an edge set E whose elements characterize the incidence relations between distinct pairs of V. The notation i∼j is used to denote that node i is connected to node j, or equivalently, (i,j)∈E. We make use of the |V|×|E| incidence matrix, D(G), for a graph with an arbitrary orientation, i.e., a graph whose edges have a head (a terminal node) and a tail (an initial node). The columns of D(G) are then indexed by the edge set, and the ith row entry takes the value 1 if it is the initial node of the corresponding edge, −1 if it is the terminal node, and zero otherwise. The diagonal matrix Δ(G) of the graph contains the degree of each vertex on its diagonal. The adjacency matrix, A(G), is the |V|×|V| symmetric matrix with zero in the diagonal and one in the (i,j)th position if node i is adjacent to node j. The graph Laplacian [25] of G, L:=12D(G)D(G)T=Δ(G)−A(G), is a rank deficient positive semi-definite matrix.

An undirected path between node i1 and node is on undirected graph means a sequence of ordered undirected edges with the form (ik;ik+1),k=1,⋯,s−1. A graph G is said to be connected if there exists a path between each pair of distinct nodes.

Graph G is undirected and connected.

, zero is a simple eigenvalue of

as an eigenvector and all the other eigenvalues are positive. Moreover, the smallest nonzero eigenvalue

where A∈Rn×n and B∈Rn×p both are constant matrices with compatible dimensions, xi(t)∈Rn and ui(t)∈Rp is the state and control input of the ith agent, respectively, and f:Rn×R+→Rp is a nonlinear function. Suppose that there is a time-varying reference signal, ri(t)∈Rn,i=1,2,⋯,N, which generated by the following Lipschitz-type nonlinear dynamical systems:

where ri(t)∈Rn is the state of the ith reference signal.

It is assumed that agent i has access to ri(t), and agent i can obtain the relative information from its neighbors denoted by Ni.

The main objective of this paper is to design a class of distributed controller ui(t) for physical agent i in (1) to track the average of multiple reference signals ri(t) generated by the general nonlinear dynamics (2), i.e.,

where each agent has only local interaction with its neighbors.

Therefore, a distributed average tracking controller algorithm is designed as

with a distributed average tracking filter algorithm is proposed as follows:

where ~xi(t)=xi(t)−pi(t), si(t),i=1,2,⋯,N, are the states of the DAT algorithm, ϕi=∥xi(t)−ri(t)∥+ν, and ϑi=∥ri(t)∥+β state-dependent time-varying parameters, μ, ν, α and β constant parameters, K1 and K2 control gain matrices, respectively, to be determined.

Then, using the controller (3) for (1), one gets the tracking error system

Algorithm 1: Under Assumptions 1 and 2, for multiple reference signals in (2), the distributed average tracking algorithms (3.1) and (3) can be constructed as follows

Under Assumptions 1-3, by using the distributed average tracking controller algorithm (3) with the distributed average tracking filter algorithm (3.1), the state xi(t) in (1) will track the average of multiple reference signals ri(t),i=1,2,⋯,N, generated by the Lipschitz-type nonlinear dynamical systems (2) if the parameters α, β, μ, ν and the feedback gains Ki,i=1,2, are designed by Algorithm 1.

Proof: The proof contains three steps. First, it is proved that for the ith agent, limt→∞(pi(t)−1N∑Nk=1pk(t))=0. Consider the Lyapunov function candidate

By the definition of ξ(t), it is easy to see that (1T⊗I)ξ=0. For the connected graph G, it then follows from Lemma 1 that

where λmin(P1) is the smallest eigenvalue of the positive matrix P1. The time derivative of V1 along (9) can be obtained as follows

Substituting K1=−BTP1 into (13), it follows from the fact LM=ML=L and Assumption 3 that

Note that, in above subsection, the proposed distributed average tracking algorithms (3) and (3.1) require that the parameters α and μ satisfy the conditions α≥γ+∥BTP1∥ and μ≥γ, which depend the Lipschitz constant γ. Since the γ is a global information, for a local agent, it becomes difficult to obtain γ. Therefore, to overcome the global information restriction, we design an adaptive distributed average tracking controller algorithm

respectively, where κi,χi are adaptive parameters to be determined.