Recently, the deep convolutional neural network (CNN) has made remarkable progress in single image super resolution(SISR). However, blindly using the residual structure and dense structure to extract features from LR images, can cause the network to be bloated and difficult to train. To address these problems, we propose a simple and efficient distilling with residual network(DRN) for SISR. In detail, we propose residual distilling block(RDB) containing two branches, while one branch performs a residual operation and the other branch distills effective information. To further improve efficiency, we design residual distilling group(RDG) by stacking some RDBs and one long skip connection, which can effectively extract local features and fuse them with global features. These efficient features beneficially contribute to image reconstruction. Experiments on benchmark datasets demonstrate that our DRN is superior to the state-of-the-art methods, specifically has a better trade-off between performance and model size. 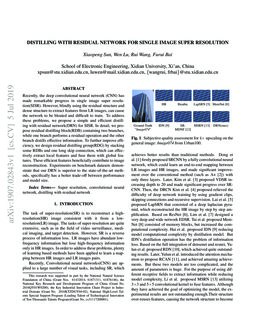 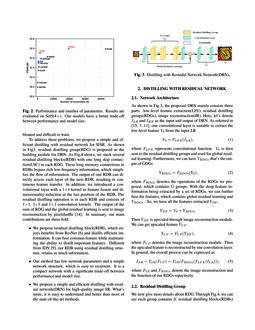 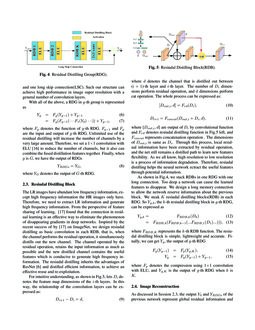 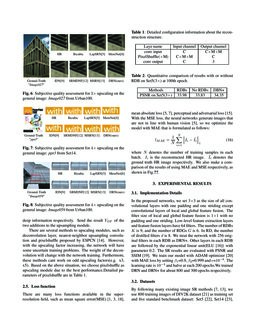 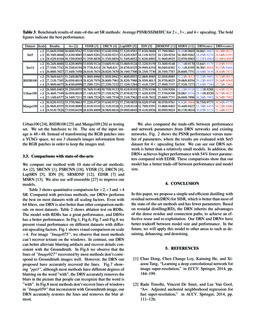 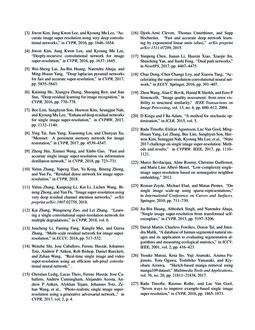 The task of super-resolution(SR) is to reconstruct a high-resolution(HR) image consistent with it from a low-resolution(LR) image. The tasks of super-resolution are quite extensive, such as in the field of video surveillance, medical imaging, and target detection. However, SR is a reverse process of information loss. LR images have abundant low-frequency information but lose high-frequency information only in HR images. In order to address these problems, plenty of learning based methods have been applied to learn a mapping between HR images and LR images pairs.

Recently, Convolutional neural networks(CNN) are applied to a large number of visual tasks, including SR, which achieves better results than traditional methods. Dong et al. [1] firstly proposed SRCNN by a fully convolutional neural network, which could learn an end-to-end mapping between LR images and HR images, and made significant improvement over the conventional method (such as A+ [2]) with only three layers. Later, Kim et al. [3] proposed VDSR increasing depth to 20 and made significant progress over SRCNN. Then, the DRCN Kim et al. [4]

[5] proposed LapSRN that consisted of a deep laplacian pyramid, which reconstructed the HR image by step by step amplification. Based on ResNet [6], Lim et al. [7] designed a very deep and wide network EDSR. Tai et al. proposed MemNet [8] consisted of memory blocks, but increased the computational complexity. Hui et al. proposed IDN [9] reducing model computational complexity by distillation model. But IDN’s distillation operation has the problem of information loss. Based on the full integration of densenet and resnet, Yulun et al. proposed RDN [10], which achieved quite outstanding results. Later, Yulun et al. introduced the attention mechanism to propose RCAN [11], and achieved amazing achievements. But these two models are too complicated, and the amount of parameters is huge.

For the purpose of using different receptive fields to extract information while reducing model complexity, Li et al. proposed MSRN [13] utilizing 3×3 and 5×5 convolutional kernel to fuse features. Although they have achieved the goal of optimizing the model, the experimental results are not outstanding enough.Their structure over-reuses features, causing the network structure to become bloated and difficult to train.

To address these problems, we propose a simple and efficient distilling with residual network for SISR. As shown in Fig3, residual distilling group(RDG) is proposed as the building module for DRN. As Fig.4 shows, we stack several residual distiliing blocks(RDB) with one long skip connection(LSC) in each RDG. These long memory connections in RDBs bypass rich low-frequency information, which simplifies the flow of information. The output of one RDB can directly access each layer of the next RDB, resulting in continuous feature transfer. In addition, we introduced a convolutional layer with a 1×1 kernel as feature fusion and dimensionality reduction at the last position of the RDB. The residual distilling operation is in each RDB and consists of 1×1, 3×3 and 1×1 convolution kernels. The output of the sum of RDG and the global residual learning is sent to image reconstruction by pixelshuffle [14].

In summary, our main contributions are three-fold:

As shown in Fig.3

ILR and IHR as the input and output of DRN. As referred in  [15, 7, 11], one convolutional layer is suitable to extract the low-level feature Y0 from the input LR

where FLFE represents convolutional function. Y0 is then sent to the residual distilling groups and used for global residual learning. Furthermore, we can have YRDGs that’s the output of GDGs

where FRDGs denotes the operations of the RDGs we proposed, which contains G

groups. With the deep feature information being extracted by a set of RDGs, we can further fuse the features, which contains global residual learning and

YRDGs . So, we have all the features extracted YDF,

Then YDF is upscaled through image reconstruction module. We can get upscaled feature YUP

where FUP denotes the image reconstruction module. Then the upscaled feature is reconstructed by one convolution layer. In general, the overall process can be expressed as

where FIR and FRDGs denote the image reconstruction and the function of our RDGs repectively.

We now give more details about RDG. Through Fig.4, we can see each group contains K residual distilling blocks(RDBs) and one long skip connection(LSC). Such our structure can achieve high performance in image super resolution with a general number of convolution layers.

With all of the above, a RDG in g-th group is represented as

where Fg denotes the function of g-th RDG. Fg−1 and Fg are the input and output of g-th RDG. Unlimited use of the residual distilling will increase the number of channels by a very large amount. Therefore, we set a 1×1 convolution with ELU [16] to reduce the number of channels, but it also can combine the fused distillation features together. Finally, when g is G, we have the output of RDGs

where YG denotes the output of G-th RDG.

on ImageNet, we design resiudal distilling as basic convolution in each RDB, that is, when the channel performs the residual operation, it simultaneously distills out the new channel. The channel operated by the residual operation, retains the input information as much as possible and the new distilled channel contains the useful features which is conducive to generate high frequency information. The resiudal distilling inherits the advantages of ResNet

[6] and distilled efficient information, to achieve an effective reuse and re-exploitation.

For intuitive understanding, as shown in Fig.5, let’s Di denotes the feature map dimensions of the i-th layers. In this way, the relationship of the convolution layers can be expressed as:

where [Dout,i,d] are output of Di by convolutional function and Frd denotes resiudal distilling function in Fig.5 left, and Fconcat represents concatenation operation . The dimensions of Dout,i is same as Di. Through this process, local residual information have been extracted by residual operation, and the net still remains a distilled path to learn new features flexibility. As we all know, high resolution to low resolution is a process of information degradation. Therefore, resiudal distilling helps the neural network ectract the useful features through potential information.

where FRDB,K represents the k-th RDB function. The resiudal distilling block is simple, lightweight and accurate. Finally, we can get Yg, the output of g-th RDG

where Fp denotes the compression using 1×1 convolution with ELU, and Yg,K is the output of g-th RDG when k is K.

As discussed in Session 2.3, the output Y0 and YRDGs of the previous network represent global residual information and deep information respectively. Send the result YDF of the two additions to the upsampling module.

There are several methods to upscaling modules, such as deconvolution layer, nearest-neighbor upsampling convolution and pixelshuffle proposed by ESPCN [14]

There are many loss functions available in the super-resolution field, such as mean square error(MSE)

[1, 3, 18], mean absolute loss [5, 7], perceptual and adversarial loss [15]. With the MSE loss, the neural networks generate images that are not in line with human vision [5], so we optimize the model with MAE that is formulated as follows:

where N denotes the number of training samples in each batch. Ii is the reconstructed HR image. ^Ii denotes the ground truth HR image respectively. We also make a comparison of the results of using MAE and MSE respectively, as shown in Fig.LABEL:fig:loss.

In the proposed networks, we set 3×

×1 with no padding and one striding. Low-level feature extraction layers and feature fusion layers have 64 filters. The number of RDBs K is 9, and the number of RDGs G is 6. In RD, the number of distilled filters d is 8. We treat the network with 256 original filters in each RDB as DRN+. Other layers in each RDB are followed by the exponential linear unit(ELU [16]) with parameter 0.2. The SR results are evaluated with PSNR and SSIM [19]. We train our model with ADAM optimizer [20] with MAE loss by setting β1=0.9, β2=0.999 and ϵ=10−8. The learning rate is 10−4 and halve at each 200 epochs.We trained DRN and DRN+ for about 800 and 300 epochs respectively.

Table 3 shows quantitative comparison for ×2,×3 and ×4 SR. Compared with previous methods, our DRN+ performs the best on most datasets with all scaling factors. Even with 64 filters, our DRN is also better than other comparison methods on most datasets. Table 2 shows ablation test on RDBs. The model with RDBs has a great performance, and DBN+ has a better performance. In Fig.1, Fig.6, Fig.7 and Fig.8 we present visual performance on different datasets with different upscaling factors. Fig.1 shows visual comparison on scale ×4. For image ”Image075”, we observe that most methods can’t recover texture on the windows. In contrast, our DRN can better alleviate blurring artifacts and recover details consistent with the Groundtruth. In Fig.6 we observe that the lines of ”Image027” recovered by most methods don’t correspond to Groundtruth images well. However, the DRN our proposed have accurately recoverd the lines. Fig.7 showing ”ppt3”, although most methods have different degrees of blurring on the word ”with”, the DRN accurately removes the blurs in the picture that people can recognize that the word is ”with”. In Fig.8 most methods don’t recover lines of windows in ”Image059” that inconsistent with Groundtruth image, our DRN accurately restores the lines and removes the blur almost.

In this paper, we propose a simple and efficient distilling with residual network(DRN) for SISR, which is better than most of the state-of-the-art methods and has fewer parameters. Based on resiudal distilling(RD), the DRN inherits the advantages of the dense residue and connection paths, to achieve an effective reuse and re-exploitation. Our DRN and DRN+ have better tradeoff between model size and performance. In the future, we will apply this model to other areas to such as de-raining, dehanzing, and denoising.