Machine learning applications to symbolic mathematics are becoming increasingly popular, yet there lacks a centralized source of real-world symbolic expressions to be used as training data. In contrast, the field of natural language processing leverages resources like Wikipedia that provide enormous amounts of real-world textual data. Adopting the philosophy of "mathematics as language," we bridge this gap by introducing a pipeline for distilling mathematical expressions embedded in Wikipedia into symbolic encodings to be used in downstream machine learning tasks. We demonstrate that a mathematical language model trained on this "corpus" of expressions can be used as a prior to improve the performance of neural-guided search for the task of symbolic regression. 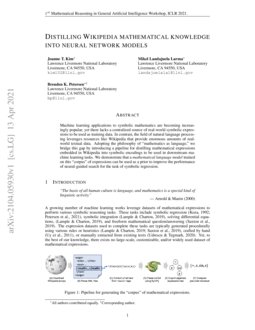 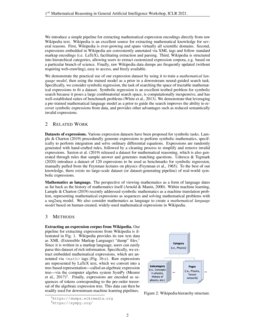 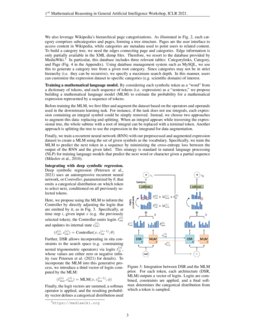 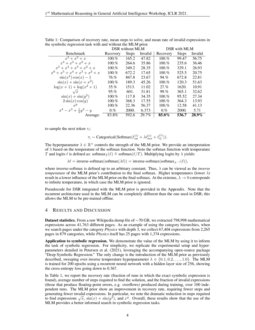 “The basis of all human culture is language, and mathematics is a special kind of linguistic activity.” — Arnold and Manin (2000)

(Lample and Charton, 2019; Saxton et al., 2019), crafted by hand (Uy et al., 2011), or manually extracted from existing texts (Udrescu and Tegmark, 2020). Yet, to the best of our knowledge, there exists no large-scale, customizable, and/or widely used dataset of mathematical expressions.

We demonstrate the practical use of our expression dataset by using it to train a mathematical language model, then using the trained model as a prior in a downstream neural-guided search task. Specifically, we consider symbolic regression, the task of searching the space of tractable mathematical expressions to fit a dataset. Symbolic regression is an excellent testbed problem for symbolic search because it poses a large combinatorial search space, is computationally inexpensive, and has well-established suites of benchmark problems (White et al., 2013). We demonstrate that leveraging a pre-trained mathematical language model as a prior to guide the search improves the ability to recover symbolic expressions from data, and provides other advantages such as reduced semantically invalid expressions.

Datasets of expressions. Various expression datasets have been proposed for symbolic tasks. Lample and Charton (2019)

Saxton et al. (2019) released a dataset for mathematical reasoning, which is also generated through rules that sample answer and generates matching questions. Udrescu and Tegmark (2020) introduce a dataset of 120 expressions to be used as benchmarks for symbolic regression, manually pulled from the Feynman lectures on physics (Feynman et al., 1965). To the best of our knowledge, there exists no large-scale dataset (or dataset-generating pipeline) of real-world symbolic expressions.

Extracting an expression corpus from Wikipedia. Our pipeline for extracting expressions from Wikipedia is illustrated in Fig. 1. Wikipedia provides its raw text data as XML (Extensible Markup Language) “dump” files.111https://dumps.wikimedia.org Since it is written in a markup language, users can easily parse this dataset of rich information. Specifically, we extract embedded mathematical expressions, which are annotated via <math> tags (Fig. 1b-c). Raw expressions are represented by LaTeX text, which we convert into a tree-based representation—called an algebraic expression tree—via the computer algebra system SymPy (Meurer et al., 2017)222https://sympy.org/. Finally, expressions are encoded as sequences of tokens corresponding to the pre-order traversal of the algebraic expression tree. This data can then be readily used for downstream machine learning pipelines.

We also leverage Wikipedia’s hierarchical page categorizations. As illustrated in Fig. 2, each category comprises subcategories and pages, forming a tree structure. Pages are the user interface to access content in Wikipedia, while categories are metadata used to point users to related content. To build a category tree, we need the edges connecting page and categories. Edge information is only partially available in the XML dump files. Therefore, we resort to the database provided by MediaWiki.333https://mediawiki.org In particular, this database includes three relevant tables: Categorylinks, Category, and Page (Fig. 4 in the Appendix). Using database management system such as MySQL, we use this to generate a category tree from a given root category. Since categories may not be in strict hierarchy (i.e. they can be recursive), we specify a maximum search depth. In this manner, users can customize the expression dataset to specific categories (e.g. scientific domain) of interest.

Before training the MLM, we first filter and augment the dataset based on the operators and operands used in the downstream learning task. For instance, if the task does not use integrals, each expression containing an integral symbol could be simply removed. Instead, we choose two approaches to augment this data: replacing and splitting. When an integral appears while traversing the expressional tree, the whole subtree with a root of integral can be replaced with a terminal token. Another approach is splitting the tree to use the expression in the integrand for data augmentation.

Finally, we train a recurrent neural network (RNN) with our preprocessed and augmented expression dataset to create a MLM using the set of given symbols as the vocabulary. Specifically, we train the MLM to predict the next token in a sequence by minimizing the cross-entropy loss between the output of the RNN and the given label. This strategy is standard in natural language processing (NLP) for training language models that predict the next word or character given a partial sequence

Integrating with deep symbolic regression. Deep symbolic regression (Petersen et al., 2021) uses an autoregressive recurrent neural network, or Controller, parameterized by θ, that emits a categorical distribution on which token to select next, conditioned on all previously selected tokens.

Further, DSR allows incorporating in situ constraints to the search space (e.g. constraining nested trigonometric operators) via logits ℓ(i)⦸, whose values are either zero or negative infinity (see Petersen et al. (2021) for details). To incorporate the MLM into this generative process, we introduce a third vector of logits computed by the MLM:

Finally, the logit vectors are summed, a softmax operator is applied, and the resulting probability vector defines a categorical distribution used to sample the next token τi:

Pseudocode for DSR integrated with the MLM prior is provided in the Appendix. Note that the recurrent architecture used in the MLM can be completely different than the one used in DSR; this allows the MLM to be pre-trained offline.

Dataset statistics. From a raw Wikipedia dump file of ∼70 GB, we extracted 798,998 mathematical expressions across 41,763 different pages. As an example of using the category hierarchies, when we search pages under the category Physics with depth 3, we collect 67,404 expressions from 2,265 pages in 879 categories, while Physics itself has 25 pages with 1,374 expressions.

, leveraging the accompanying open-source package “Deep Symbolic Regression.” The only change is the introduction of the MLM prior as previously described, sweeping over inverse temperature hyperparameter

. The MLM is trained for 200 epochs using a recurrent neural network with a hidden layer size of 256, showing the cross-entropy loss going down to 0.367.

In Table 1, we report the recovery rate (fraction of runs in which the exact symbolic expression is found), average number of steps required to find the solution, and the fraction of invalid expressions (those that produce floating-point errors, e.g. overflows) produced during training, over 100 independent runs. The MLM prior show an improvement in recovery rate, requiring fewer steps and generating fewer invalid expressions. In particular, we note the dramatic reduction in steps required to find expressions √x, sin(x)+sin(y2), and xy. Overall, these results show that the use of the MLM provides a better informed search in symbolic regression tasks.

We introduce a pipeline for generating a largescale “corpus” of mathematical expressions directly from Wikipedia, and demonstrate that a language model trained on this dataset can improve neural-guided search for the task of symbolic regression. Possible alternative uses of a MLM include auto-completion of writing expressions in LaTeX, or improving recognition of hand-written expressions.