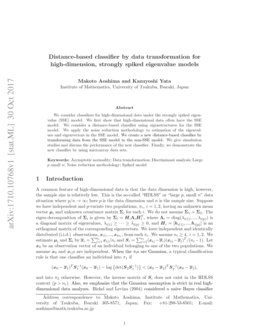 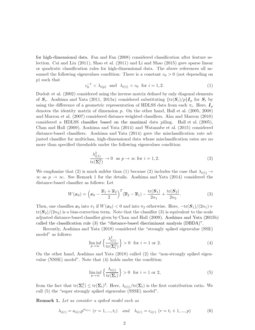 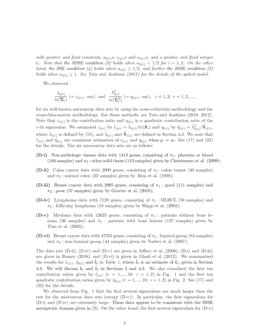 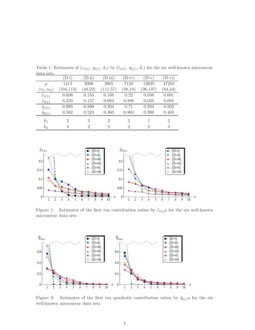 On a Generalization of the Average Distance Classifier

If You Must Choose Among Your Children, Pick the Right One

Given a simplicial complex K and an injective function f from the vertic...
Benjamin Holmgren, et al. ∙

, having an unknown mean vector

is an orthogonal matrix of the corresponding eigenvectors. We have independent and identically distributed (i.i.d.) observations,

and into π2 otherwise. However, the inverse matrix of \boldmath{S}i does not exist in the HDLSS context (p>ni). Also, we emphasize that the Gaussian assumption is strict in real high-dimensional data analyses. Bickel and Levina (2004)

Cai and Liu (2011), Shao et al. (2011) and Li and Shao (2015) gave sparse linear or quadratic classification rules for high-dimensional data. The above references all assumed the following eigenvalues condition: There is a constant c0>0 (not depending on p) such that

denotes the identity matrix of dimension

We emphasize that (2) is much milder than (1) because (2) includes the case that λi(1)→∞ as p→∞. See Remark 1 for the details. Aoshima and Yata (2014) considered the distance-based classifier as follows: Let

On the other hand, Aoshima and Yata (2018) called (2) the “non-strongly spiked eigenvalue (NSSE) model”. Note that (4) holds under the condition:

from the fact that tr(\boldmathΣ2i)≤tr(\boldmathΣi)2. Here, λi(1)/tr(\boldmathΣi) is the first contribution ratio. We call (5) the “super strongly spiked eigenvalue (SSSE) model”.

Let us consider a spiked model such as

We observed from Fig. 1 that the first several eigenvalues are much larger than the rest for the microarray data sets (except (D-v)). In particular, the first eigenvalues for (D-i) and (D-iv) are extremely large. These data appear to be consistent with the SSSE asymptotic domain given in (5). On the other hand, the first several eigenvalues for (D-v) are relatively small. However, from Table 1 and Fig. 2, ηi(1)s for (D-v) are not sufficiently small. Also, ηi(1)s for (D-ii), (D-iii) and (D-vi) are relatively large in Table 1 and Fig. 2. Hence, the six microarray data appear to be consistent with the SSE asymptotic domain given in (4). See Section 4.3. In this paper, we consider classifiers under the SSE model. We do not assume the normality of the population distributions. We propose an effective distance-based classifier for such high-dimensional data sets.

In this section, we introduce asymptotic properties of the distance-based classifier for high-dimensional data. As for any positive-semidefinite matrix M, we write the square root of M as \boldmath{M}1/2. Let

where \boldmath{z}ij=(zij(1),...,zij(p))T is considered as a sphered data vector having the zero mean vector and identity covariance matrix. Similar to Bai and Saranadasa (1996) and Chen and Qin (2010), we assume the following assumption for πi, i=1,2, as necessary:

When the πis are Gaussian, (A-i) naturally holds. Let

Let e(i) denote the error rate of misclassifying an individual from πi into the other class for i=1,2. Then, for the classification rule (3) DBDA, Aoshima and Yata (2014) gave the following result.

denote a random variable distributed as the standard normal distribution and

Assume also the NSSE condition (2). Under a certain assumption milder than (A-i), it holds that as m→∞

Furthermore, for DBDA, it holds that as m→∞

Aoshima and Yata (2015b) gave a different asymptotic normality from Theorem 2 under different conditions. From the facts that δoi/δi→1 as m→∞ under (AY-iii) and Var{W(\boldmath{x}0)}=δ2i when \boldmath{x}0∈πi, one may write (8) as

In this paper, we consider the distance-based classifier from a different point of view. We consider the classifier under the SSE model. We emphasize that high-dimensional data often have the SSE model. See Table 1, Figs. 1 and 2. If the SSE condition (4) is met, one cannot claim the asymptotic normality in Theorem 2. In addition, if the SSE condition (4) is met, (AY-ii) in Theorem 1 is equivalent to

for 1≤r<s≤ki; i=1,2. We emphasize that (M-i) is a natural model under the SSE condition (4). See Fig. 2. The six microarray data appear to be consistent with (M-i). Similar to (9), we note that the sufficient condition (AY-ii) in Theorem 1 is equivalent to

under (M-i). According to the arguments in the last paragraph of Section 2, if (M-i) is met, DBDA has the classification consistency (7) under strict conditions compared to the NSSE condition (2). Also, one cannot claim the asymptotic normality in Theorem 2 under (M-i). In order to overcome the difficulties, similar to Aoshima and Yata (2018), we consider a data transformation from the SSE model to the NSSE model.

where λmax(\boldmath{M}) denotes the largest eigenvalue of any positive-semidefinite matrix, M. Hence, we can say that a classifier by using the transformed data has the classification consistency (7) under mild conditions compared to DBDA when (M-i) is met. In addition, one can claim the asymptotic normality of the classifier even when the SSE condition (4) is met.

In Sections 3.2 and 3.3, we give consistency properties and an asymptotic normality of WA(\boldmath{x}0). We assume the following conditions as necessary: