Dissecting Power of a Finite Intersection of Context Free Languages

Let ^k,α denote a tetration function defined as follows: ^1,α=2^α and ^k+1,α=2^^k,α, where k,α are positive integers. Let Δ_n denote an alphabet with n letters. If L⊆Δ_n^* is an infinite language such that for each u∈ L there is v∈ L with | u|<| v|≤^k,α| u| then we call L a language with the growth bounded by (k,α)-tetration. Given two infinite languages L_1,L_2∈Δ_n^*, we say that L_1 dissects L_2 if | L_1∩ L_2|=∞ and |(Δ_n^*∖ L_1)∩ L_2|=∞. Given a context free language L, let κ(L) denote the size of the smallest context free grammar G that generates L. We define the size of a grammar to be the total number of symbols on the right sides of all production rules. Given positive integers n,k with k≥ 2, we show that there are context free languages L_1,L_2,…, L_3k-3⊆Δ^*_n with κ(L_i)≤ 40 k such that if α is a positive integer and L⊆Δ_n^* is an infinite language with the growth bounded by (k,α)-tetration then there is a regular language M such that M∩(⋂_i=1^3k-3L_i) dissects L and the minimal deterministic finite automaton accepting M has at most k+α+3 states. 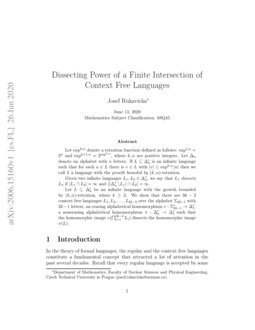 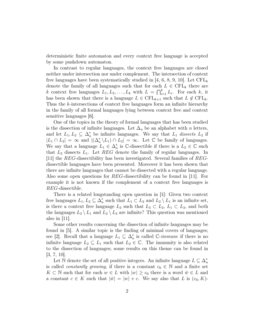 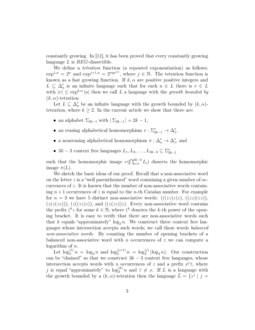 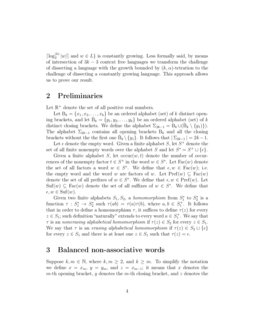 On the Intersection of Context-Free and Regular Languages

On the widths of regular and context free languages, with an application to information flow

In this thesis we will introduce topological automata and the topologica...
Florian Starke, et al. ∙

In the theory of formal languages, the regular and the context free languages constitute a fundamental concept that attracted a lot of attention in the past several decades. Recall that every regular language is accepted by some deterministic finite automaton and every context free language is accepted by some pushdown automaton.

We define a tetration function (a repeated exponentiation) as follows: exp1,α=2α and expj+1,α=2expj,α, where j∈N. The tetration function is known as a fast growing function. If k,α are positive positive integers and L⊆Δ∗n is an infinite language such that for each u∈L there is v∈L with |v|≤expk,α|u| then we call L a language with the growth bounded by (k,α)-tetration.

Let L⊆Δ∗n be an infinite language with the growth bounded by (k,α)-tetration, where k≥2. In the current article we show that there are:

Let log(1)2n=log2n and log(j+1)2n=log(j)2(log2n). Our construction can be “chained” so that we construct 3k−3 context free languages, whose intersection accepts words with n occurrences of z and a prefix xj¯z, where j is equal “approximately” to log(k)2n and ¯z≠x. If L is a language with the growth bounded by a (k,α)-tetration then the language ¯L={zj∣j=⌈log(k)2|w|⌉ and w∈L} is constantly growing. Less formally said, by means of intersection of 3k−3 context free languages we transform the challenge of dissecting a language with the growth bounded by (k,α)-tetration to the challenge of dissecting a constantly growing language. This approach allows us to prove our result.

Let R+ denote the set of all positive real numbers.

Let μk,m:Σ∗2k−1→Σ∗2k−1 be an erasing alphabetical homomorphism defined as follows:

For given k,m the erasing alphabetical homomorphism μk,m sends all opening and closing brackets from Bk and ¯Bk to the empty string with the exception of x, y, and z.

We call the words from Nawk,m non-associative words over the opening bracket x, the closing bracket y, and the letter z.

Let M=μk,m(Nawk,m). To understand the definition of Nawk,m, note that the language M is generated by the context free grammar defined by: S→xSSy∣xzy∣xzzy. To see this, just remove the non-terminal symbol N in the definition of Nawk,m. The usage of the non-terminal symbol N allows to “insert” between any two letters of a word from μk,m(Nawk,m) the words from K=(Σ2k−1∖{x,y,z})∗; the set K contains words from Σ∗2k−1 that have no occurrence of x,y,z. It means that if w=w1w2…wn∈μk,m(Nawk,m), then t0w1t1w2t2…tn−1wntn∈Nawk,m, where wi∈{x,y,z} and ti∈K.

Recall that a pushdown automaton is a 6-tuple (Q,Δ,Γ,q0,S,δ), where

Clearly ¯w is uniquely defined. Then we have that w∈μk,m(Λk,m) if and only if ¯w=ϵ or occur(¯w,xx)+1=occur(¯w,xz). It follows that the words without any occurrence of xx are accepted. In the following we will consider the words from the intersection U=Λk,m∩Nawk,m. Note that there are only two nonempty words xzy,xzzy∈U, that have no occurrence of xx.

We call the words from Balk,m balanced words.

Let M=μk,m(Balk,m). It is easy to see that the words from the language M contains no factor of the form zyixjz, where i,j are distinct positive integers; hence the name “balanced” words. The non-terminal symbols K,P enable that if w∈M then w has a prefix xi and a suffix yj for some i,j∈N∪{0}.

We call the words from Ωk,m balanced non-associative words over the opening bracket x, the closing bracket y, and a letter z.

Let Ωk,m(n)={w∈Ωk,m∣occur(w,z)=n}, where n∈N. The set Ωk,m(n) contains the balanced non-associative words having exactly n occurrences of the letter z.

The height of a word w is the maximal power of the letter a, that is a factor of w. We show that if w∈μk,m(Ωk,m) and h is the height the opening bracket x in w then xh is a prefix of w and yh is a suffix of w.

This is a contradiction, since for every prefix v∈Pref(w) of a non-associative word w∈Nawk,m we have that occur(v,x)≥occur(v,y). We conclude that ¯h=h and xh∈Pref(w). In an analog way we can show that yh∈Suf(w). This completes the proof. ∎

For a word w∈μk,m(Ωk,m), we show the relation between the height of w and the number of occurrences of z in w.

We prove the proposition for all h by induction:

Proposition 3.6 have the following obvious corollary.

We prove that the set of balanced non-associative words Ωk,m(n) having n occurrences of z is nonempty for each n∈N.

Let Ωk=⋂km=2Ωk,m and let Ωk(n)={w∈Ωk∣occur(w,x1)=n}. We show that for all positive integers n,k with k≥2 there is a word w∈Ωk such that w has n occurrences of the opening bracket x1.

To clarify the proof of Proposition 4.1, let us see the following example.

To fit the example into the width of the page, we define auxiliary words u1 and u2:

Then we have that

This ends the example.

It is a simple exercise to prove the following lemma. We omit the proof.

Note in Lemma 4.3 that the constant c1 depends on j.

Using the function log(k)2t we present an upper and a lower bound for the height of words from Ωk.

Note in Proposition 4.5 that the constant c1 depends on k.

5 Dissection by a regular language

In [YAMAKAMI2013116] it was shown that every constantly growing language can be dissected by some regular language.

Recall that a deterministic finite automaton g is 5-tuple (Q,Δ,q0,δ,F), where Q is the set of states, Δ is an input alphabet, q0 is the initial state, δ is a transition function, and F is the set of accepting states. Let AL(g) denote the language accepted by g; AL(g) is a regular language.

We prove that if L⊆Ωk is an infinite language of balanced non-associative words with the number of occurrences of x1 “bounded” by (k,α)-tetration then L can be dissected by a regular language.

If k,α∈N, k≥2, and L⊆Ωk is an infinite language such that for each w1∈L there is w2∈L with occur(w2,x1)≤expk,αoccur(w1,x1) then there is a regular language R such that R dissects L.

From (4) it follows that

Lemma 5.2 implies that there are j1,j2 such that both H1,H2 are infinite sets, where