We propose an unsupervised variational model for disentangling video into independent factors, i.e. each factor's future can be predicted from its past without considering the others. We show that our approach often learns factors which are interpretable as objects in a scene. 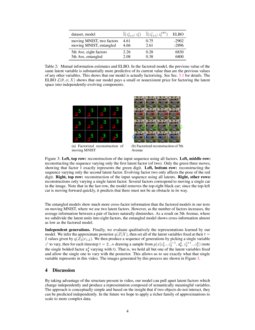 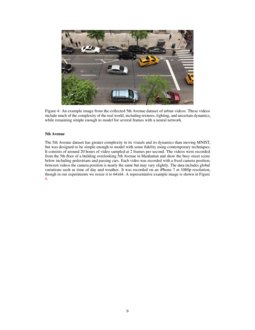 Deep neural networks have delivered impressive performance on a range of perceptual tasks, but their distributed representation is difficult to interpret and poses a challenge for problems involving reasoning. Motivated by this, the deep learning community has recently explored methods [

, i.e. a unit (or small group) within the latent feature vector are exclusively responsible for capturing distinct concepts within the input signal. This work proposes such an approach for the video domain, where the temporal structure of the signal is leveraged to automatically separate the input into factors that vary independently of one another over time. Our results demonstrate that these factors correspond to distinct objects within the video, thus providing a natural representation for making predictions about future motions of the objects and subsequent high-level reasoning tasks.

Related work. [22] leverage structure at different time-scales to factor signals into independent components. Our approach can handle multiple factors at the same time-scale, instead relying on prediction as the factoring mechanism. Outside of the video domain, [1] proposed to disentangle factors that tend to change independently and sparsely in real-world inputs, while preserving information about them. [15] learned to disentangle factors of variation in synthetic images using weak supervision, and [21] extended the method to be fully unsupervised. Similar to our work, both [3] and [4] propose unsupervised schemes for disentangling video, the latter using a variational approach. However, ours differs in that it uncovers general factors, rather than specific ones like identity and pose or static/dynamic features as these approaches do.

The intuition behind our model is simple: in any real-world scene, most objects do not physically interact with one another, so their motion can be modeled independently. To find a representation of videos with these same independences, we introduce an approach based on a temporal version [14] of the variational auto-encoder [10], shown in Figure 1. In this model, each video X comprises a sequence of frames x1...xn. Zt=z1t...zkt represents all the latent factors at time t, where each factor zit is represented by a vector. Each of these factors evolve independently from one another and combine to produce the observation xt for timestep t. Instead of directly maximizing the likelihood p(X;θ), we use variational inference [5] to optimize the evidence lower bound (ELBO), that is θ∗,ϕ∗=argmaxθ,ϕL(θ,ϕ;X):

For a derivation, see Appendix B. This lower bound naturally splits into two factors. The first, pθ(X|Z), is the log-likelihood of the data X under our model when sampling from the approximate posterior, that is the “reconstruction” of X from Z. The second factor is the KL divergence between the learned prior pθ(Z) and the approximate posterior qϕ(Z|X). It represents how far the predictions given by p are from the inferred values given by q; it is the prediction error in the latent space. Our goal is to optimize the space of Z to make both reconstruction and prediction possible.

For the variational approximation, we choose qϕ(Z|X)=∏nt=1q(Zt|Zt−1,xt;ϕ)

which, analogous to a Kalman filter, considers only the past state and current observation. This approximation marginalizes over the future, in that

must encode sufficient information to allow correct predictions of the future as well as fit the prior and the current observation. This allows us to do inference on a single frame and ensure our representation retains as much information about the future as possible. If we wish to use our learned representation for a downstream task, we may discard the generative model and use the inference network alone. This inference network can provide a factorized representation given a single image or use a sequence of images to produce increasingly tight estimates of the latent variables.

This model can be thought of as a series of variational autoencoders with a learned prior, and the training procedure is largely similar to [

10]. At each timestep t in a sequence, we compute the prior pθ(Zt|Zt−1) over the latent space, using N(0,I) for t=0. We infer the approximate posterior qϕ(Zt|Zt−1,xt) by observing xt and compute the KL divergence DKL(q||p). We then sample Zt∼qϕ(Zt|Zt−1,xt) using the reparameterization trick and compute logpθ(xt|Zt). At the end of a sequence we update our parameters θ,ϕ by backprop to maximize the ELBO (defined above).

Datasets. We apply this model to two video datasets: the widely-used moving MNIST [19] and a new dataset of real-world videos of 5th Avenue recorded from above, which was collected by the authors. More details about these datasets, including a sample frame from 5th Avenue, can be found in Appendix C.

Lower bound. We compare the variational lower bound achieved by our factorized model with that of a non-factorized but otherwise identical model. These experiments reveal the price in terms of data fidelity that we pay for representing the data as independently-changing factors. Table 2 shows that the factored model achieves a lower bound on par with the entangled model.

Correlation structure. By plotting the correlation between samples from the approximate posterior over the latent variables at time t and at time t+1, we may observe whether our model has been able to learn a representation for which zit+1 really does only depend on zit and not on the other latent factors. Note that this only captures the linear dependence of these variables; this analysis helps to illustrate the structure of our latent space, but should not be considered definitive. Figure 4 shows that each latent factor is much more correlated with its own previous state than with other latent factors.

Approximate mutual information. We use Kraskov’s method for estimating mutual information [13] to approximate I(zit+1;zit) and compare it to I(zit+1;zj≠it). A latent factor zit should be much more informative about its own future zit+1 than a different factor zj≠it is. The results, shown in Table 2, reveal that the evolution of each factor in the factored models depends almost exclusively on their past.

For the entangled models, which do not have separate factors, there is no a priori subdivision into high- and low-mutual-information segments of units. The reported scores were generated by creating 20 random partitionings of the latent units into k factors, then reporting the mutual information numbers for the partitioning that had the greatest difference between same-factor and cross-factor information.

The entangled models show much more cross-factor information than the factored models in our tests on moving MNIST, where we use two latent factors. However, as the number of factors increases, the average information between a pair of factors naturally diminishes. As a result on 5th Avenue, where we subdivide the latent units into eight factors, the entangled model shows cross-information almost as low as the factored model.

Independent generations. Finally, we evaluate qualitatively the representations learned by our model. We infer the approximate posterior q(Z|X), then set all of the latent variables fixed at their t=2 values given by q(Z2|x1,2). We then produce a sequence of generations by picking a single variable zi to vary, then for each timestep t=2...n drawing a sample from p(x|z12...zi−12,zit,zi+12...zk2) (note the single bolded factor zit varying with t). That is, we hold all but one of the latent variables fixed and allow the single one to vary with the posterior. This allows us to see exactly what that single variable represents in this video. The images generated by this process are shown in Figure 7.

By taking advantage of the structure present in video, our model can pull apart latent factors which change independently and produce a representation composed of semantically meaningful variables. The approach is conceptually simple and based on the insight that if two objects do not interact, they can be predicted independently. In the future we hope to apply a richer family of approximations to scale to more complex data.

The Journal of Machine Learning Research

All models are trained using the ADAM optimizer [9] with a learning rate of 3e−4.

where mu(Z_{t} | Z_{t-1}) and sigma(Z_{t} | Z_{t-1}) are the mean and variance vectors respectively of the prediction pθ(Zt|Zt−1) and z_dim is the number of latent factors times the dimensionality of each factor. output_mu and output_sigma are the mean and diagonal covariance of the approximate posterior, and output_sigma is actually output as logσ2

for numerical reasons. Each layer is followed by a Leaky ReLU activation.

At t=0, when there is no Zt−1, we pass all-zero vectors instead.

The generator network takes in a latent vector Z and produces a pixelwise mean for an output image. It has this form:

is the number of latent factors times the dimensionality of each factor. Each layer is followed by a ReLU activation. We use a fixed variance in our Normal observation model of 0.25 for moving MNIST and 0.05 for 5th Avenue. This variance hyperparameter may be tuned to balance the tradeoff between fitting the predictions and making tight reconstructions.

Each latent factor has its own transition function pθ(zit|zit−1). Each of these has the following form:

where latent_dim is the dimensionality of a single latent factor and each layer is followed by a SELU activation [11]. The latent_dim * 2

output is for the mean and (diagonal) variance vectors for the Normal distribution. The variance is produced as

Appendix B: Deriving the ELBO

For this section the factored form of the transitions pθ(Zt|Zt−1)=∏ki=1pθ(zit|zit−1) is not relevant. As such our development here will use the more general non-factored form, and we can substitute in our factored special case later. For simplicity of notation we will use p(⋅) in place of pθ(⋅). Likewise we use q(⋅) in place of qϕ(⋅) to represent our variational approximation function with parameters ϕ.

We begin with the form of our latent-variable generative model.

Since the series Z is Markov,

We introduce our variational auxiliary functions:

Realizing that the expectations Elogqp are KL divergences gives us an objective we can optimize:

This bound would hold for any function pθ(Zt|Zt−1). Our model factors this general transition function:

which corresponds to a hidden Markov model with multiple Markov chains running in parallel in the latent space.

This dataset consists of two digits from the MNIST dataset bouncing in a 64x64 pixel frame. Each digit is on a separate plane of the input (i.e., one is red and the other is green). The digits have randomized starting location and velocity vector for each sequence, but their motion is deterministic over the course of the sequence and the digits do not interact.

The 5th Avenue dataset has greater complexity in its visuals and its dynamics than moving MNIST, but was designed to be simple enough to model with some fidelity using contemporary techniques. It consists of around 20 hours of video sampled at 2 frames per second. The videos were recorded from the 5th floor of a building overlooking 5th Avenue in Manhattan and show the busy street scene below including pedestrians and passing cars. Each video was recorded with a fixed camera position; between videos the camera position is nearly the same but may vary slightly. The data includes global variations such as time of day and weather. It was recorded on an iPhone 7 at 1080p resolution, though in our experiments we resize it to 64x64. A representative example image is shown in Figure 8.

Appendix B: Deriving the ELBO