We observe standard transfer learning can improve prediction accuracies of target tasks at the cost of lowering their prediction fairness -- a phenomenon we named discriminatory transfer. We examine prediction fairness of a standard hypothesis transfer algorithm and a standard multi-task learning algorithm, and show they both suffer discriminatory transfer on the real-world Communities and Crime data set. The presented case study introduces an interaction between fairness and transfer learning, as an extension of existing fairness studies that focus on single task learning. 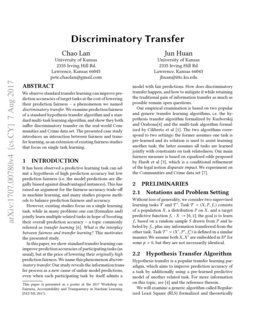 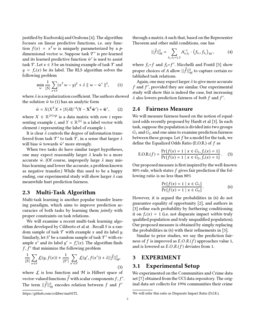 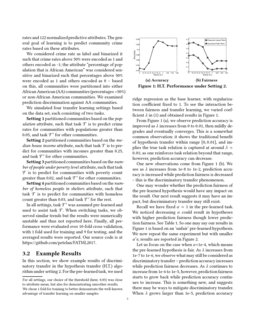 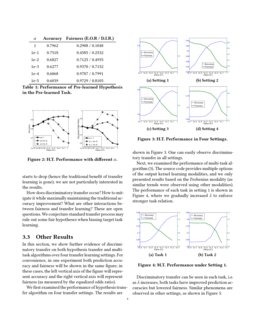 It has been observed a predictive learning task can admit a hypothesis of high prediction accuracy but low prediction fairness (i.e. the model predictions are illegally biased against disadvantaged instances). This has raised an argument for the fairness-accuracy trade-off in machine learning, and many studies propose methods to balance prediction fairness and accuracy.

However, existing studies focus on a single learning task, while in many problems one can (formalize and) jointly learn multiple related tasks in hope of boosting their overall prediction accuracy – a topic commonly referred as transfer learning (Pan and Yang, 2010). What is the interplay between fairness and transfer learning? This motivates the presented study. ††This paper is presented as a poster at the 2017 Workshop on Fairness, Accountability and Transparency in Machine Learning (FAT/ML 2017).

In this paper, we show standard transfer learning can improve prediction accuracies of participating tasks (as usual), but at the price of lowering their originally high prediction fairness. We name this phenomenon discriminatory transfer. Our study reveals the information transfer process as a new cause of unfair model predictions, even when each participating task by itself admits a model with fair predictions. How does discriminatory transfer happen, and how to mitigate it while retaining the traditional gain of information transfer as much as possible remain open questions.

. The two algorithms correspond to two settings: the former assumes one task is pre-learned and its solution is used to assist learning another task; the latter assumes all tasks are learned jointly with constraints on task relatedness. Our main fairness measure is based on equalized odds proposed by Hardt et al

(Hardt et al., 2016), which is a conditional refinement of the legal notion disparate impact. We experiment on the Communities and Crime data set (Redmond and Baveja, 2002).

Without loss of generality, we consider two supervised learning tasks

T and T′. Task T=(X,P,f∗) consists of a population X, a distribution P on X, and a target predictive function f∗:X→[0,1]; the goal is to learn f∗ based on a random sample S drawn from P and labeled by f∗, plus any information transferred from the other task. Task T′=(X′,P′,f′∗) is defined in a similar manner. We assume both X,X′ are embedded in Rp for some p>0, but they are not necessarily identical.

Hypothesis transfer is a popular transfer learning paradigm, which aims to improve prediction accuracy of a task by additionally using a pre-learned predictive model of another related task. For more information on this topic, see (Kuzborskij and Orabona, 2013) and the reference therein.

w. Suppose task T′ is pre-learned and its learned predictive function ^w′ is used to assist task T. Let x∈S be an training example of task T and y=f∗(x) be its label. The RLS algorithm solves the following problem

where λ is a regularization coefficient. The authors showed the solution ^w to (1) has an analytic form

It is clear λ controls the degree of information transferred from task T′ to task T, in a sense that larger λ will bias ^w towards ^w′ more strongly.

When two tasks do have similar target hypotheses, one may expect reasonably larger λ leads to a more accurate ^w. (Of course, improperly large λ may mis-bias learning and lower the accurate, a problem known as negative transfer.) While this used to be a happy ending, our experimental study will show larger λ can meanwhile hurt prediction fairness.

Multi-task learning is another popular transfer learning paradigm, which aims to improve prediction accuracies of both tasks by learning them jointly with proper constraints on task relations.

is loss function and

H is Hilbert space of vector-valued functions →f with scalar components f,f′. The term ||→f||2H encodes relation between f and f′ through a matrix A such that, based on the Representer Theorem and other mild conditions, one has

Again, one may expect larger λ to give more accurate f and f′, provided they are similar. Our experimental study will show this is indeed the case, but increasing λ also lowers prediction fairness of both f and f′.

We will measure fairness based on the notion of equalized odds recently proposed by Hardt et al (Hardt et al., 2016). In each task, suppose the population is divided into two groups G1 and G2, and one aims to examine prediction fairness between these groups. Let f be a model for the task, we define the Equalized Odds Ratio (E.O.R.) of f as

Our proposed measure is first inspired by the well-known 80%-rule, which states f gives fair prediction if the following ratio††We will refer this ratio as Disparate Impact Ratio (D.I.R.). is no less than 80%

However, it is argued the probabilities in (

Similar to prior studies, we say the prediction fairness of f is improved as E.O.R.(f) approaches value 1, and is lowered as E.O.R.(f) deviates from 1.

We experimented on the Communities and Crime data set (Redmond and Baveja, 2002) obtained from the UCI data repository. The original data set collects for 1994 communities their crime rates and 122 normalized predictive attributes. The general goal of learning is to predict community crime rates based on these attributes.

We simulated four transfer learning settings based on the data set, each consisting of two tasks.

Setting 1 partitioned communities based on the population attribute, such that task T is to predict crime rates for communities with populations greater than 0.05, and task T′ for other communities††For all settings, our choice of the threshold (here, 0.05) was close to attribute mean, but also for demonstrating smoother results..

Setting 2 partitioned communities based on the median house income attribute, such that task T is to predict for communities with incomes greater than 0.25, and task T′ for other communities.

Setting 3 partitioned communities based on the number of people under poverty level attribute, such that task T is to predict for communities with poverty count greater than 0.02, and task T′ for other communities.

Setting 4 partitioned communities based on the number of homeless people in shelters attribute, such that task T is to predict for communities with homeless count greater than 0.03, and task T′ for the rest.

In all settings, task T′ was assumed pre-learned and used to assist task T. When switching tasks, we observed similar trends but the results were numerically unstable and thus not reported here. Finally, all performance were evaluated over 10-fold cross validation, with 1 fold used for training and 9 for testing, and the averaged results were reported††We chose 1 fold for training to better demonstrate the well-known advantage of transfer learning on smaller samples. Our source code is at https://github.com/petelan/FATML2017.

In this section, we show example results of discriminatory transfer in the hypothesis transfer (H.T.) algorithm under setting 2. For the pre-learned task, we used ridge regression as the base learner, with regularization coefficient fixed to 1. To see the interaction between fairness and transfer learning, we varied coefficient

From Figure 1 (a), we observe prediction accuracy is improved as λ increases from 0 to 0.01, then mildly degrades and eventually converges. This is a somewhat common observation: it shows the traditional benefit of hypothesis transfer within range [0,0.01], and implies the true task relation is captured at around λ=0.01; as one reinforces task relation beyond that range, however, prediction accuracy can decrease.

Our new observations come from Figure 1 (b). We see as λ increases from 1e-8 to 1e-2, prediction accuracy is increased while prediction fairness is decreased – this is the discriminatory transfer phenomenon.

One may wonder whether the prediction fairness of the pre-learned hypothesis would have any impact on the result. Our next result suggests it may have an impact, but discriminatory transfer may still exist.

Let us focus on the case when α=1e-4, which means the pre-learned hypothesis is fair. As λ increases from 1e-7 to 1e-6, we observe what may still be considered as discriminatory transfer – prediction accuracy increases while prediction fairness decreases. As λ continues to increase from 1e-6 to 1e-5, however, prediction fairness starts to grow back while prediction accuracy continues to increase. This is something new, and suggests there may be ways to mitigate discriminatory transfer. When λ grows larger than 1e-5, prediction accuracy starts to drop (hence the traditional benefit of transfer learning is gone); we are not particularly interested in the results.

How does discriminatory transfer occur? How to mitigate it while maximally maintaining the traditional accuracy improvement? What are other interactions between fairness and transfer learning? These are open questions. We conjecture standard transfer process may rule out some fair hypotheses when biasing target task learning.

In this section, we show further evidence of discriminatory transfer on both hypothesis transfer and multi-task algorithms over four transfer learning settings. For convenience, in one experiment both prediction accuracy and fairness will be shown in the same figure; in these cases, the left vertical axis of the figure will represent accuracy and the right vertical axis will represent fairness (as measured by the equalized odds ratio).

We first examined the performance of hypothesis transfer algorithm on four transfer settings. The results are shown in Figure 3. One can easily observe discriminatory transfer in all settings.

Next, we examined the performance of multi-task algorithm (3). The source code provides multiple options of the output kernel learning modalities, and we only presented results based on the Frobenius modality (as similar trends were observed using other modalities). The performance of each task in setting 1 is shown in Figure 4, where we gradually increased λ to enforce stronger task relation.

Discriminatory transfer can be seen in each task, i.e. as λ increases, both tasks have improved prediction accuracies but lowered fairness. Similar phenomena are observed in other settings, as shown in Figure 5.

The presented study shows standard transfer learning can improve prediction accuracy of target tasks at the cost of lowering their prediction fairness. How to explain this phenomenon in principle, and how to minimize fairness damage while retaining the traditional accuracy improvement gained by transfer learning remain open questions.

Zemel et al (Zemel et al., 2013) had a very interesting result suggesting fairness may be transferrable: they showed a fair feature representation learned for one task can be used in another task to improve the latter’s prediction fairness. We studied a fundamentally different problem, and showed discrimination can be induced from the transfer process, even when the pre-learned hypothesis is fair. Besides, their transfer setting is different from ours: they focused on feature learning and treated different label sets of the same population as different tasks, while ours focused on predictive learning and treated the same label set of different populations as different tasks – a setting of domain adaptation (Pan and Yang, 2010).

The present study is motivated by negative transfer proposed by Rosenstein et al in (Rosenstein et al., 2005); they showed learning tasks jointly may not improve their prediction accuracies if the tasks are not as similar as presumed. We had not come up with a similarly concrete hypothesis for discriminatory transfer, however, and only conjectured transfer process may rule out fair hypotheses when biasing target task learning.

The authors would like to thank anonymous reviewers for their valuable comments and suggestions.