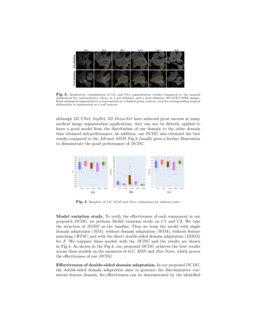 The domain adaptation can learn generically adaptive representation domain but is subject to the limited discriminative feature domain for the task model learning. On the one hand, recent domain adaptation approaches usually introduce a discriminator to encourage data from one domain to generate a feature domain that is similar to the other one by keeping inter representation invariant between the two domains. They are based on a single adaptation direction. Thus the generated feature space is limited by one of the two domains. Because the original feature space of the other domain is lost, it can result in a reduced feature space of the two domains. On the other hand, the widespread domain adaptation approaches work with only the labeled data for the task model learning. The unlabeled data is only used to generate the domain adaptation space along with the labeled data based on an adversarial learning. Therefore, the discriminativeness of adapted features for subsequent task model still completely rely on the labeled data. Consequently, it is hard to guarantee the discriminativeness of adapted features for task learning of the unlabeled data.

In this work, we propose a discriminative consistent domain generation method based on double-sided domain adaptation (as shown in Fig.1) to learn a task model (TM) in a semi-supervised manner. In our proposed DCDG, the available labeled data L=(Lx,Ly) come from domain Dl and the unlabeled data U=(Ux) come from domain Du. The Dl and Du are from the same or a similar domain. We adopt the double-sided domain adaptation to generate a consistent feature domain F that fuses the feature spaces of Dl and Du instead of extracting the common parts of two domains or making one domain to adapt the other one. DCDG shares a feature representation generator FG→F that maps Lx and Ux to the consistent feature domain F (Fl and Fu). For the purpose of discriminative feature generation, we map F to the predicted label domain via TM. Then the domain discriminator maps predicted label domain to another feature domain (F′) to make an identification via indirect double-sided domain adaptation for F. During the indirect double-sided domain adaptation, the parameters of TM are fixed and we constrain F′ to match the F generated by FG. We can adapt the F indirectly by adapting the F′ to guarantee the discriminativeness of feature domain F for the subsequent learning of TM. During the discriminative consistent feature domain generation, we can learn the TM although there are no available labels in Ux for us to directly learn the TM. The F′ is matched with F, which is produced by both the Lx and Ux. We can further map F′ to the generated labeled and unlabeled data (L′x and U′x) to use the image consistency as the semi-supervised information to learn the TM.We demonstrate the performance of our proposed DCDG for the left atrium segmentation [2, 3] on a LGE-CMRI dataset, which plays an important role in the management of atrial fibrillation and myocardial infarction[4, 5].

The proposed DCDG tries to generate the discriminative consistent feature domain with fused feature space from the labeled data Lx and unlabeled data Ux by the indirect double-sided domain adaptatipon. Meanwhile, we introduce an extra image consistent generation as the semi-supervised learning. Then the segmentation model can also be trained by the Ux along with the Lx. Detailed network configuration can be found in the supplementary materials.

to the estimated LA and PVs with probability maps (

LP and UP) of Lx and Ux via the segmentation model (SM). Then the domain discriminator (D) generates the feature domain F′ (F′l and F′u) by the final convolutional layer from LP and UP, and finally produces a scalar value to identify the F′l and F′u. During the indirect learning, we fix the parameters of SM and match the feature domains between F′ and F via the squared L2-norm that is defined as:

Therefore, we identify the F indirectly by identifying the F′ to guarantee the discriminativeness of feature domain F for the learning of segmentation network.

where the Lx and Ux represent the input of the labeled and unlabeled data, respectively. σ is the binary cross-entropy loss. SM represents the segmentation model. During the domain adaptation, the parameters of the SM are fixed.

Semi-supervised segmentation model learning. During the generation of the discriminative consistent feature domain, we learn the segmentation model SM by Lx and Ux. Since there is no available labels for Ux, Ux cannot be directly used for training the segmentation model along with the Lx. However, during the double-sided domain adaptation, we get the matched feature domains between F and F′, while the F is generated from the Lx and Ux. Hence, we perform a reverse mapping (RM) that mapping the F′ to the L′x and U′x which are matched with Lx and Ux to achieve the consistent image generation. Then the Ux can use a consistent image loss as semi-supervised loss Lsemi to train the SM along with the supervised loss Lsuper from the Lx . Finally, we use Lx and Ux to train SM with the loss defined as follows:

represents the Dice loss function. We train the

after each epoch of the domain adaptation.

Evaluation criteria. We use the region-based metrics: the Dice coefficient (Dice=2|P⋂G||P|+|G|) and intersection-over-union (IoU=|P⋂G||P|⋃|G|), which validate the predicted LA and PVs (P) against the ground-truth (G). And the surface-based metric of mean surface distance defined as MSD=12[¯¯¯d(S,S′)+¯¯¯d(S′,S)], which ¯¯¯d(S,S′) is the mean of the distances between every surface voxel in predicted mesh S and the closest surface voxel in ground-truth mesh S′.

In our experiments, we used two centers dataset (detailed imaging parameters can be found in the supplementary materials) for the LA and PVs segmentation to validate the proposed DCDG. The final segmentation model was obtained using ‘early stopping’ on validation data. To demonstrate the performance of our proposed DCDG, we compare our proposed DCDG with full supervised methods, e.g., 2D UNet [7], SegNet [8] and a recent state-of-the-art 3D segmentation architecture namely 3D DenseNet [9], and also make a comparision between DCDG and a semi-supervised [10] (AR) method along with a domain adaptation [11] (ASOS) method with the single-level adversarial learning. In addition, we also compared DCDG to itself but used in a fully supervised manner, namely full supervised segmentation (FSS).

Experiments on a single center dataset. We performed multiple experiments on data with the same image domain based on different ratios of labeled data acquired at center 1 denoted as C1. The total number of C1 data is 175, in which 140 samples are randomly selected and used to train the model. We randomly selected 15 samples for model validation (7 pre-ablation and 8 post-ablation samples). We also randomly selected 20 samples for independent testing (10 pre-ablation and 10 post-ablation samples). During the experiment, we randomly selected different ratio r of labeled cases (r=25%,50%,75%) from 140 samples along with the ratio (1-r) of the unlabeled data for the semi-supervised learning of DCDG and AR, while the ASOS is learned by the labeled data of ratio r with the test data. The full supervised methods performed with the standard supervised training manner based on all the labeled data. The quantitative results are summarized in Table 1. As shown in Table 1, when we use 50% labeled data, the performance of DCDG is superior to 2D UNet, SegNet, 3D DenseNet. When we use 75% labeled data, the performance of DCDG is superior to FSS, which use 100% labeled data with fully supervised learning. Compared to those methods, we can use much less labeled data to obtain better results. It has great significance to avoid costly manual labeling when there is limited expert availability. Furthermore, compared with AR and ASOS, our proposed DCDG also achieves the best results.

Experiments on a two center dataset. For the experiment performed at C1 data was labelled as opposed to C2 which was unlabelled. The total number of C2 data is 94. We randomly selected 20 samples for testing (including 10 pre-ablation samples and 10 post-ablation samples). The remained 74 samples with no labels were used to train the DCDG along with the 140 samples with available labels from C1. We also apply the same 15 validation dataset used in the learning from the single center data to validate the segmentation model during training. For 2D UNet, SegNet, 3D DenseNet and FSS, supervised learning were performed on 140 samples with available labels from C1. As shown in Table 2, although 2D UNet, SegNet, 3D DenseNet have achieved great success in many medical image segmentation applications, they can not be directly applied to learn a good model from the distribution of one domain to the other domain thus obtained sub-performance. In addition, our DCDG also obtained the best results compared to the AR and ASOS. Fig.3 visually gives a further illustration to demonstrate the good performance of DCDG.

Model variation study. To verify the effectiveness of each component in our proposed DCDG, we perform Model variation study on C1 and C2. We take the structure of DCDG as the baseline. Then we train the model with single domain adaptation (SDA), without domain adaptation (WDA), without feature matching (WFM) and with the direct double-sided domain adaptation (DDDA) for F. We compare these models with the DCDG and the results are shown in Fig.4. As shown in the Fig.4, our proposed DCDG achieves the best results across these models on the measures of IoU, MSD and Dice Score, which proves the effectiveness of our DCDG.

In this paper, we proposed a discriminative consistent domain generation for the semi-supervised learning. In our proposed DCDG, we investigate the double-sided domain adaptation based on an indirect adversarial learning to fit the differences between labeled data and unlabeled data and generate the discriminative feature domain with fused feature space. Validation of our framework has been performed against manually delineated ground truth of the LA and PVs segmentation task. Compared to other supervised, semi-supervisd and domain adaptation methods, our DCDG has demonstrated superior performance. In conclusion, our proposed DCDG makes it possible to create a robust semi-supervised learning model using the unlabeled data along with labeled data collected from a single center or a multicenter studies that can be well extended to solve other medical image analysis problems.