In neuroimaging studies, the human cortex is commonly modeled as a sphere to preserve the topological structure of the cortical surface. Cortical neuroimaging measures hence can be modeled in spherical representation. In this work, we explore analyzing the human cortex using spherical CNNs in an Alzheimer's disease (AD) classification task using cortical morphometric measures derived from structural MRI. Our results show superior performance in classifying AD versus cognitively normal and in predicting MCI progression within two years, using structural MRI information only. This work demonstrates for the first time the potential of the spherical CNNs framework in the discriminative analysis of the human cortex and could be extended to other modalities and other neurological diseases. 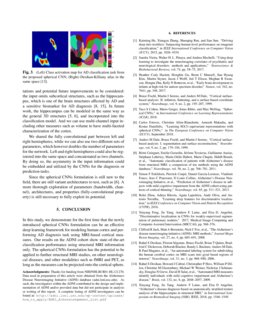 [2]. Most previous studies in neuroimaging field either study the extracted features from predefined regions of interest (ROIs) [3] or feed 3D convolutional neural networks directly with the 3D imaging volume. The former approach potentially introduces too much prior into the model and limits the input representation. While the latter approach has the advantage of being agnostic and prior-free, adequate priors from previous neuroimaging studies could be helpful to regularize the input information.

The human cortex is commonly modeled as a 2D manifold sheet-like structure, despite the presence of sulci/gyri folds. Therefore, 2D CNNs can, in principle, be applied on the cortical sheet after flattening onto a 2D plane [4]. However, inevitable distortions in the flattening process affect the data representation. Surface cutting has been proposed to alleviate distortions caused by the intrinsic curvature of the cortical surface, but this again introduces artificial changes to the topology of the surface [4]. Modeling the cortical surface of each hemisphere with a sphere is more accurate and desirable [4], and spherical coordinate system is the common practice in neuroimaging field, as it can preserve the topological structure of the cortical surface. But 2D CNNs cannot be directly applied on a sphere.

A spherical CNNs framework was recently introduced [5] and is explored for the first time in this study to analyze the human cortex in a spherical representation. Spherical CNNs were proposed to model spherical data such as molecular modeling, 3D shape [5, 6] and has shown promising performances.

Alzheimer’s disease (AD) is a neurodegenerative disease impacting a large population and is the most common cause of dementia. Accurate diagnosis of AD and mild cognitive impairment (MCI) is of increasing importance. Cortical morphometric measures such as cortical thickness derived from T1-weighted structural MRI have demonstrated to be important biomarkers for the diagnosis of AD, MCI, which are characterized by cortical gray matter atrophy. In this work, we apply a spherical CNNs based framework on the cortical thickness data derived from structural MRI in Alzheimer’s Disease Neuroimaging Initiative (ADNI)111http://adni.loni.usc.edu/ cohort, for the AD versus cognitively normal (CN) classification task, and for MCI conversion prediction within two years.

To the best of our knowledge, this is the first work applying spherical CNNs on human cortex data and demonstrates the potential for diverse studies on discriminative analyses of human cortex neuroimaging data.

The cortical surfaces were reconstructed using FreeSurfer [7] and morphed to the spherical representation by minimizing areal and distance distortions. All the individual cortical surfaces were registered to a spherical atlas in the fsaverage space matching cortical folding patterns [4]. At each vertex of the atlas cortical surface, multiple measures including thickness, surface area, volume, curvature, sulc, Jacobian determinant (warping to the atlas) can be derived from FreeSurfer. Sensitivities of different measures vary in different diseases. And any measure can naturally be regarded as the channels in the data representation. In this study, we used cortical thickness as it has been previously demonstrated to be highly sensitive for AD diagnosis [8, 9].

Elements in the SO(3) space are represented in the Euler ZYZ data format as:

Elements in the S2 space can be similarly represented as:

Then we apply a weighted global average pooling (wGAP) step, consisting of integrating over the spatial dimensions of the convolutional feature maps and correcting for the non-uniformity of the grid in the Y axis.

We also compared to regular CNNs on the same sampled input, with the same architecture using regular 2D convolutions, replacing 3D BN with 2D BN, and doubling the channel dimensions to ensure approximately same number of parameters. Denoting the convolution operation with c channels as Conv(c

For model training, we used the cross-entropy loss and optimized using stochastic gradient descent (SGD) with moment 0.9. We used a batch size of 8 and ran the algorithm for 200 epochs, with a 0.1 learning rate at the first 100 epochs and 0.01 learning rate for the last 100 epochs.

In each experiment, we set out one fold as test set, one fold as validation set, and the rest of the folds as training set. At each fold, the model with the maximum validation accuracy is selected as the optimal model. The probability output of all test sets using the optimal models are aggregated together. We reported the area under curve (AUC) of the receiver operating characteristic (ROC) curve in Fig.

2, and also reported the accuracy, sensitivity and specificity.

A population-average AD class activation map of left hemisphere at γ=0, generated with the spherical CNNs, is shown in Fig. 3 together with a reference label map from the Desikan-Killiany atlas [13] sampled in the same way as the thickness measures. The colors and orders of the regions in the reference label map are displayed according to the FreeSurfer color lookup table. We observed two blobs of AD predictive regions: the lower left blob corresponding to regions around medial temporal lobe, and the upper blob corresponding to regions in the vicinity of supramarginal gyrus. Both regions are implicated in AD, according to [14].

Despite promising results obtained via our application of spherical CNNs to cortical measures, there are several limitations and potential future improvements to be considered: the input omits subcortical structures, such as the hippocampus, which is one of the brain structures affected by AD and a sensitive biomarker for AD diagnosis [8, 15], In future work, the hippocampus can be modeled in the same way as the general 3D structures [5, 6], and incorporated into the classification model. And we can use multi-channel input including other measures such as volume to have multi-faceted characterization of the cortex.

We shared the fully convolutional part between left and right hemispheres, while we can also use two different sets of parameters, which however doubles the number of parameters for the network. Left and right hemispheres could also be registered into the same space and concatenated as two channels. By doing so, the asymmetry in the input information could be embedded and utilized by the CNNs for the diagnosis or prediction tasks.

Since the spherical CNNs formulation is still new to the field, there are still variant architectures to test, such as [6]. A more thorough exploration of parameters (bandwidth, channel), architectures, and properties (fully-convolutional property) is still necessary to fully exploit its potential.

In this study, we demonstrate for the first time that the newly introduced spherical CNNs formulation can be an effective deep learning framework for modeling human cortex and performing AD diagnosis task using MRI-based cortical measures. Our results on the ADNI cohort show state-of-the-art classification performance using structural MRI information only. The spherical CNNs formulation has the potential to be applied to further structural MRI studies, on other neurological diseases, and other modalities such as fMRI and PET, as long as the measures can be projected onto the cortical sphere.

Acknowledgments: Thanks for funding from NIH/NHLBI R01-HL121270. Data used in preparation of this article were obtained from the Alzheimer’s Disease Neuroimaging Initiative (ADNI) database (adni.loni.usc.edu). As such, the investigators within the ADNI contributed to the design and implementation of ADNI and/or provided data but did not participate in analysis or writing of this report. A complete listing of ADNI investigators can be found at: http://adni.loni.usc.edu/wp-content/uploads/how_to_apply/ADNI_Acknowledgement_List.pdf