Discontinuous Galerkin methods, based on piecewise polynomials of degree q≥ 0, are investigated for temporal semi-discretization for second order hyperbolic equations. Energy identities and stability estimates of the discrete problem are proved for a slightly more general problem, that are used to prove optimal order a priori error estimates with minimal regularity requirement. Uniform norm in time error estimates are proved for the constant and linear cases. Numerical experiments are performed to verify the theoretical rate of convergence. 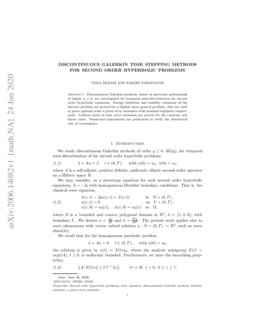 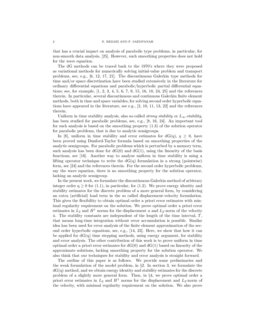 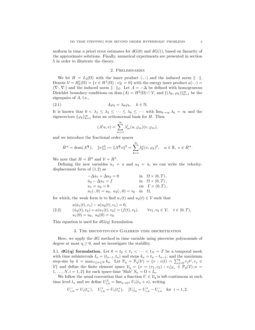 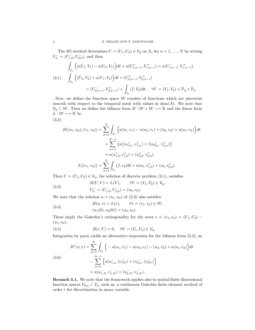 The aim of this paper is to apply a high-order discontinuous-in-time sch...
Aili Shao, et al. ∙

In this paper we propose a variant of enriched Galerkin methods for seco...
Jeonghun J. Lee, et al. ∙

We consider the time discretization of a linear parabolic problem by the...
William McLean, et al. ∙

We address the issue of the suboptimality in the p-version discontinuous...
Zhaonan Dong, et al. ∙

where A is a self-adjoint, positive definite, uniformly elliptic second-order operator on a Hilbert space H.

We may consider, as a prototype equation for such second order hyperbolic equations, A=−Δ with homogeneous Dirichlet boundary conditions. That is, the classical wave equation,

We recall that for the homogeneous parabolic problem

the solution is given by u(t)=E(t)u0, where the analytic semigroup E(t)=exp(tA), t≥0, is uniformly bounded. Furthermore, we have the smoothing properties,

that has a crucial impact on analysis of parabolic type problems, in particular, for non-smooth data analysis, [25]. However, such smoothing properties does not hold for the wave equation.

The dG methods can be traced back to the 1970’s where they were proposed as variational methods for numerically solving initial-value problem and transport problems, see, e.g., [6, 12, 17, 21]

In [8], uniform in time stability and error estimates for dG(q), q≥0, have been proved using Dunford-Taylor formula based on smoothing properties of the analytic semigroups. For parabolic problems which is perturbed by a memory term, such analysis has been done for dG(0) and dG(1), using the linearity of the basis functions, see [16]. Another way to analyse uniform in time stability is using a lifting operator technique to write the dG(q) formulation in a strong (pointwise) form, see [24] and the references therein. For the second order hyperbolic problems, say the wave equation, there is no smoothing property for the solution operator, lacking an analytic semigroup.

In the present work, we formulate the discontinuous Galerkin method of arbitrary integer order q≥0 for (1.1), in particular, for (1.2). We prove energy identity and stability estimates for the discrete problem of a more general form, by considering an extra (artificial) load term in the so called displacement-velocity formulation. This gives the flexibility to obtain optimal order a priori error estimates with minimal regularity requirement on the solution. We prove optimal order a priori error estimates in L2 and H1 norms for the displacement u and L2-norm of the velocity ˙u. The stability constants are independent of the length of the time interval, T, that means long-time integration without error accumulation is possible. Similar idea has been used for error analysis of the finite element approximation of the second order hyperbolic equations, see, e.g., [14, 23]. Here, we show that how it can be applied for dG(q) time stepping methods, using energy argument, for stability and error analysis. The other contribution of this work is to prove uniform in time optimal order a priori error estimates for dG(0) and dG(1) based on linearity of the approximate solutions, lacking smoothing property for the solution operator. We also think that our techniques for stability and error analysis is straight forward.

The outline of this paper is as follows. We provide some preliminaries and the weak formulation of the model problem, in \lx@sectionsign2. In section 3, we formulate the dG(q) method, and we obtain energy identity and stability estimates for the discrete problem of a slightly more general form. Then, in \lx@sectionsign4, we prove optimal order a priori error estimates in L2 and H1 norms for the displacement and L2-norm of the velocity, with minimal regularity requirement on the solution. We also prove uniform in time a priori error estimates for dG(0) and dG(1), based on linearity of the approximate solutions. Finally, numerical experiments are presented in section 5 in order to illustrate the theory.

{φk}∞k=1 form an orthonormal basis for H. Then

and we introduce the fractional order spaces

Defining the new variables u1=u and u2=˙u, we can write the velocity-displacement form of (1.2) as

This equation is used for dG(q) formulation.

Here, we apply the dG method in time variable using piecewise polynomials of degree at most q≥0, and we investigate the stability.

We follow the usual convention that a function U∈Vq is left-continuous at each time level tn and we define U±i,n=lims→0±Ui(tn+s), writing

Now, we define the function space W consists of functions which are piecewise smooth with respect to the temporal mesh with values in dom(A). We note that Vq⊂W. Then we define the bilinear form B:W×W⟶R and the linear form L:W⟶R by

Integration by parts yields an alternative expression for the bilinear form (3.2), as

We note that the framework applies also to spatial finite dimensional function spaces Vh,q⊂Vq, such as, a continuous Galerkin finite element method of order r for discretization in space variable.

where the linear form ^L:W→R is defined by

That is, instead of (2.2), we study stability of the dG(q) discretization of a more general problem

Moreover, for some C>0 (independent of T), we have the stability estimate

Now writing the first two terms at the left side as

We have the identity

Finally, to prove the stability estimate (3.9), recalling that all terms on the left side of the stability identity (3.8) are non-negative, we have

that, using Couchy-Schwarz inequality, in a classical way we conclude the stability estimate (3.9). ∎

where the latter condition is not used for q=0. By standard arguments we then have

4.1. Estimates at the nodes

1. We split the error into two terms, recalling the interpolant

We can estimate η by (4.2), so we need to find estimates for θ. Recalling Galerkin’s orthogonality (3.5), we have

Then, using the alternative expression (3.6), we have

Now, by the fact that ηi (i=1,2) vanishes at the time nodes and using the definition of Πk, it follows that ˙V1 and ˙V2 are of degree q−1 on In and hence they are orthogonal to the interpolation error. We conclude that θ∈Vq satisfies the equation

Now, using (4.2) and by the elliptic regularity ∥Au∥≤∥u∥2, the first a priori error estimate (4.3) is obtained.

We note that (4.5), means that f1=η2 and f2=−Aη1 in (3.7), which is the reason for considering an extra load term in the first equation of (2.2). This way, we can balance between the right operators and suitable norms to get optimal order of convergence with minimal regularity requirement on the solution. Indeed, in [20], it has been proved that the minimal regularity that is required for optimal order convergence for finite element discretization of the wave equation is one extra derivative compare to the order of convergence, and it cannot be relaxed. This means that the regularity requirement on the solution in our error estimates are minimal.

Now, we prove uniform in time a priori error estimates for dG(0) and dG(1), based on the linearity of the basis functions. We define the following norms