In this paper, discontinuous Galerkin finite element methods are applied to one dimensional Rosenau equation. Theoretical results including consistency, a priori bounds and optimal error estimates are established for both semidiscrete and fully discrete schemes. Numerical experiments are performed to validate the theoretical results. The decay estimates are verified numerically for the Rosenau equation. 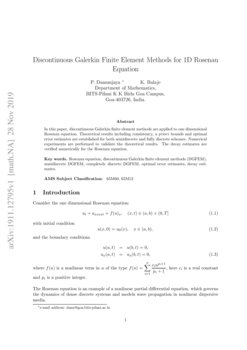 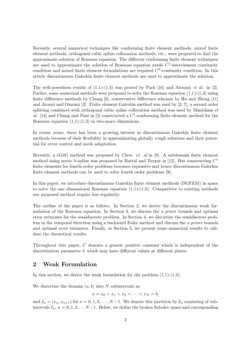 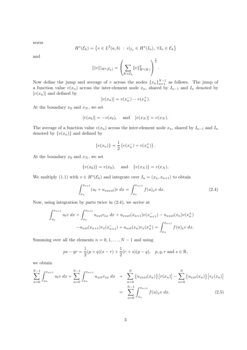 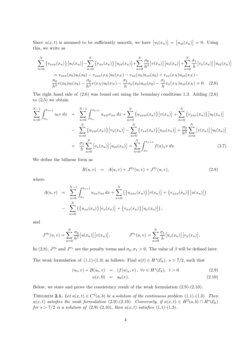 In this paper, we present an analysis of the effect of penalty term in t...
K. Balaje, et al. ∙

In this paper, we present a unified analysis of the superconvergence pro...
Limin Ma, et al. ∙

Analysis of a Helmholtz preconditioning problem motivated by uncertainty quantification

Consider the one dimensional Rosenau equation:

and the boundary conditions

where f(u) is a nonlinear term in u of the type f(u)=n∑i=1ciupi+1pi+1, here ci is a real constant and pi is a positive integer.

The Rosenau equation is an example of a nonlinear partial differential equation, which governs the dynamics of dense discrete systems and models wave propagation in nonlinear dispersive media.

In this section, we derive the weak formulation for the problem (1.1)-(1.3). We discretize the domain (a,b) into N subintervals as

Now define the jump and average of v across the nodes {xn}N−1n=1 as follows. The jump of a function value v(xn) across the inter-element node xn, shared by In−1 and In denoted by [v(xn)] and defined by

At the boundary x0 and xN, we set

The average of a function value v(xn) across the inter-element node xn, shared by In−1 and In denoted by {v(xn)} and defined by

At the boundary x0 and xN, we set

Now, using integration by parts twice in (2.4), we arrive at

We define the bilinear form as

Applying integration by parts twice on the second term on the left hand side of (2.11) to obtain,

as v is compactly supported on In. This immediately yields

Applying integration by parts twice on the second term of (2.13) and using v∈H20(Ik−1∪Ik), we obtain

In this section, we discuss the a priori bounds and optimal error estimates for the semidiscrete Galerkin method. We define a finite dimensional subspace Dk(Eh) of Hs(Eh),s>7/2 as

where uh0 is an appropriate approximation of u0 which will be defined later.

In this sub-section, we derive the a priori bounds.

for sufficiently large values of σ0 and σ1. Observe that (3.1

Let uh(t) be a solution to (3.1) and assume that f′ is bounded. Then there exists a positive constant C such that

Integrating from 0 to t, we obtain

On using the coercivity of B(uh(t),uh(t)) and the boundedness of f′, we arrive at

Using the Cauchy Schwarz inequality and the Poincaré inequality on the right hand side of (3.6), we obtain

An application of Gronwall’s inequality yields the desired a priori bound for uh(t). ∎

3.2 Error Estimates in the energy and L2-norm

In this subsection, we derive the optimal error estimates in energy and L2-norm. Often a direct comparison between u and uh does not yield optimal rate of convergence. Therefore, there is a need to introduce an appropriate auxiliary or intermediate function ~u so that the optimal estimate of u−~u is easy to obtain and the comparision between uh and ~u yields a sharper estimate which leads to optimal rate of convergence for u−uh. In literature, Wheeler [20] for the first time introduced this technique in the context of parabolic problem. Following Wheeler [20], we introduce ~u be an auxiliary projection of u defined by

For t∈(0,T] and s>7/2 then there exists a positive constant C independent of h such that the following error estimates for η hold:

We split η as follows:

is an interpolant of

u satisfying good approximation properties. Now from (3.8), we have

We note that ρ satisfies the following approximation property [17]:

A use of coercivity of B(.,.) and the assumption that ¯u is a sufficiently smooth interpolant of u, we obtain

Now we estimate the first term as follows:

Similarly the last term can be estimated as

Now using ∥η∥E≤∥ξ∥E+∥ρ∥E, we obtain the energy norm estimate for η. For the L2-estimate of η, we use the Aubin Nitsché duality argument. Consider the dual problem

We note that ϕ satisfies the regularity condition ∥ϕ∥H4≤C∥η∥. Consider

where ~ϕ is a continuous interpolant of ϕ and satisfies the approximation property:

We use the approximation property (3.16), the energy norm estimate for η and the regularity result to bound each term on the right hand side of (3.15) and obtain the estimate for ∥η∥ as:

For the estimates of the temporal derivative of η, we differentiate (3.8) with respect to t and repeat the arguments. Hence, it completes the rest of the proof. ∎

The following Lemma is useful to prove the error estimates:

Let v∈Pk(In) where In=(xn,xn+1)∈Eh. Then there exists a positive constant C independent of h such that,

We define the reference element ^In as

Since v∈Pk(In), we have the following relation (refer [4]) for the norms in the reference element and the interval In

By the equivalence of norm (refer [4]), we have

Rearranging the terms and squaring on both sides, we obtain the desired estimate. ∎

To obtain the error estimates, we subtract (3.1) from (2.9) and using the auxiliary projection (3.8), we obtain the following error equation

Now we state and prove the following theorem.

Integrating with respect to t from 0 to T and noting that θ(0)=0, we obtain

We use integration by parts on the nonlinear term to obtain,

Using the Cauchy Schwarz’s and Young’s inequality, we bound the last term of (3.22) as

Now for the first term in (3.22), we use Hölder’s inequality to write

A similar bound for the second term can be obtained as follows. Using the Hölder’s inequality, we write

Using the trace inequality, we obtain