Directional modulation (DM) is a physical layer security technique based on antenna arrays and so far the polarisation information has not been considered in its designs. To increase the channel capacity, we consider exploiting the polarisation information and send two different signals simultaneously at the same direction, same frequency, but with different polarisations. These two signals can also be considered as one composite signal using the four dimensional (4-D) modulation scheme across the two polarisation diversity channels. In this paper, based on cross-dipole arrays, we formulate the design to find a set of common weight coefficients to achieve directional modulation for such a composite signal and examples are provided to verify the effectiveness of the proposed method. 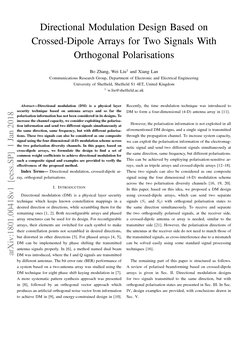 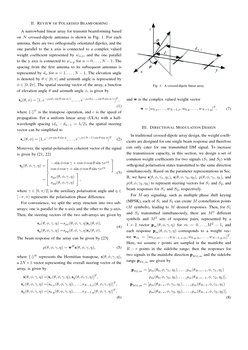 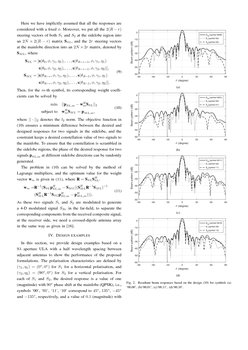 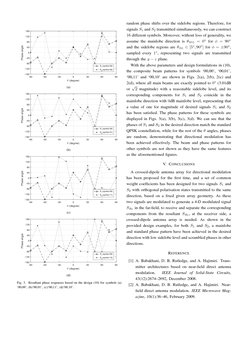 Directional modulation (DM) is a physical layer security technique which keeps known constellation mappings in a desired direction or directions, while scrambling them for the remaining ones [1, 2]. Both reconfigurable arrays and phased array structures can be used for its design. For reconfigurable arrays, their elements are switched for each symbol to make their constellation points not scrambled in desired directions, but distorted in other directions [3]. For phased arrays [4, 5], DM can be implemented by phase shifting the transmitted antenna signals properly. In [6], a method named dual beam DM was introduced, where the I and Q signals are transmitted by different antennas. The bit error rate (BER) performance of a system based on a two-antenna array was studied using the DM technique for eight phase shift keying modulation in [7]. A more systematic pattern synthesis approach was presented in [8]

, followed by an orthogonal vector approach which produces an artificial orthogonal noise vector from information to achieve DM in

[9], and energy-constrained design in [10]. Recently, the time modulation technique was introduced to DM to form a four-dimensional (4-D) antenna array in [11].

However, the polarisation information is not exploited in all aforementioned DM designs, and a single signal is transmitted through the propagation channel. To increase system capacity, we can exploit the polarisation information of the electromagnetic signal and send two different signals simultaneously at the same direction, same frequency, but different polarisations. This can be achieved by employing polarisation-sensitive arrays, such as tripole arrays and crossed-dipole arrays [12, 13, 14, 15, 16, 17, 18]. These two signals can also be considered as one composite signal using the four dimensional (4-D) modulation scheme across the two polarisation diversity channels [16, 19, 20]. In this paper, based on this idea, we proposed a DM design using crossed-dipole arrays, which can send two separate signals (S1 and S2) with orthogonal polarisation states to the same direction simultaneously. To receive and separate the two orthogonally polarised signals, at the receiver side, a crossed-dipole antenna or array is needed, similar to the transmitter side [21]. However, the polarisation directions of the antennas at the receiver side do not need to match those of the transmitted signals, as cross-interference due to a mismatch can be solved easily using some standard signal processing techniques [16].

The remaining part of this paper is structured as follows. A review of polarised beamforming based on crossed-dipole arrays is given in Sec. II. Directional modulation designs for two signals transmitted to the same direction, but with orthogonal polarisation states are presented in Sec. III. In Sec. IV, design examples are provided, with conclusions drawn in Sec. V.

A narrowband linear array for transmit beamforming based on N crossed-dipole antennas is shown in Fig. 1. For each antenna, there are two orthogonally orientated dipoles, and the one parallel to the x axis is connected to a complex valued weight coefficient represented by wn,x, and the one parallel to the y axis is connected to wn,y for n=0,…,N−1. The spacing from the first antenna to its subsequent antennas is represented by dn for n=1,…,N−1. The elevation angle is denoted by θ∈[0,π] and azimuth angle is represented by ϕ∈[0,2π]. The spatial steering vector of the array, a function of elevation angle θ and azimuth angle ϕ, is given by

where {⋅}T is the transpose operation, and c is the speed of propagation. For a uniform linear array (ULA) with a half-wavelength spacing (dn−dn−1=λ/2), the spatial steering vector can be simplified to

Moreover, the spatial-polarisation coherent vector of the signal is given by [22, 21]

where γ∈[0,π/2] is the auxiliary polarisation angle and η∈[−π,π) represents the polarisation phase difference.

For convenience, we split the array structure into two sub-arrays: one is parallel to the x-axis and the other to the y-axis. Then, the steering vectors of the two sub-arrays are given by

The beam response of the array can be given by [23]

where {⋅}H represents the Hermitian transpose, s(θ,ϕ,γ,η), a 2N×1 vector representing the overall steering vector of the array, is given by

and w is the complex valued weight vector

In traditional crossed-dipole array design, the weight coefficients are designed for one single beam response and therefore can only cater for one transmitted DM signal. To increase the transmission capacity, in this section, we design a set of common weight coefficients for two signals (S1 and S2) with orthogonal polarisation states transmitted to the same direction simultaneously. Based on the parameter representations in Sec. II, we have s(θ,ϕ,γ1,η1), s(θ,ϕ,γ2,η2), p(θ,ϕ,γ1,η1), and p(θ,ϕ,γ2,η2) to represent steering vectors for S1 and S2, and beam responses for S1 and S2, respectively.

For M-ary signaling, such as multiple phase shift keying (MPSK), each of S1 and S2 can create M constellation points (M symbols), leading to M desired responses. Then, for S1 and S2 transmitted simultaneously, there are M2 different symbols and M2 sets of response pairs, represented by a 1×2 vector pm(θ,ϕ,γ,η) for m=0,…,M2−1, and each response pm(θ,ϕ,γ,η) corresponds to a weight vector wm=[w0,x,m,…,wN−1,x,m,w0,y,m,…,wN−1,y,m]T. Here, we assume r points are sampled in the mainlobe and R−r points in the sidelobe range; then the responses for two signals in the mainlobe direction pML,m and the sidelobe range pSL,m are given by

Then, for the m-th symbol, its corresponding weight coefficients can be solved by

The problem in (10) can be solved by the method of Lagrange multipliers, and the optimum value for the weight vector wm is given in (11), where R=SSLSHSL.

As these two signals S1 and S2 are modulated to generate a 4-D modulated signal SRe in the far-field, to separate the corresponding components from the received composite signal, at the receiver side, we need a crossed-dipole antenna array in the same way as given in [16].

In this section, we provide design examples based on a 9λ aperture ULA with a half wavelength spacing between adjacent antennas to show the performance of the proposed formulations. The polarisation characteristics are defined by (γ1,η1)=(0∘,0∘) for S1 for a horizontal polarisation, and (γ2,η2)=(90∘,0∘) for S2 for a vertical polarisation. For each of S1 and S2, the desired response is a value of one (magnitude) with 90∘ phase shift at the mainlobe (QPSK), i.e., symbols ‘00’, ‘01’, ‘11’, ‘10’ correspond to 45∘, 135∘, −45∘ and −135∘, respectively, and a value of 0.1 (magnitude) with random phase shifts over the sidelobe regions. Therefore, for signals S1 and S2 transmitted simultaneously, we can construct 16 different symbols. Moreover, without loss of generality, we assume the mainlobe direction is θML=0∘ for ϕ=90∘ and the sidelobe regions are θSL∈[5∘,90∘] for ϕ=±90∘, sampled every 1∘, representing two signals are transmitted through the y−z plane.

With the above parameters and design formulations in (10), the composite beam patterns for symbols ‘00,00’, ‘00,01’, ‘00,11’ and ‘00,10’ are shown in Figs. 2, 2, 2 and 2, where all main beams are exactly pointed to 0∘ (3.01dB or √2 magnitude) with a reasonable sidelobe level, and its corresponding components for S1 and S2 coincide in the mainlobe direction with 0dB mainlobe level, representing that a value of one for magnitude of desired signals S1 and S2 has been satisfied. The phase patterns for these symbols are displayed in Figs. 3, 3, 3, 3. We can see that the phases of S1 and S2 in the desired direction match the standard QPSK constellation, while for the rest of the θ angles, phases are random, demonstrating that directional modulation has been achieved effectively. The beam and phase patterns for other symbols are not shown as they have the same features as the aforementioned figures.

A crossed-dipole antenna array for directional modulation has been proposed for the first time, and a set of common weight coefficients has been designed for two signals S1 and S2 with orthogonal polarisation states transmitted to the same direction, based on a fixed given array geometry. As these two signals are modulated to generate a 4-D modulated signal SRe in the far-field, to receive and separate the corresponding components from the resultant SRe, at the receiver side, a crossed-dipole antenna array is needed. As shown in the provided design examples, for both S1 and S2, a mainlobe and standard phase pattern have been achieved in the desired direction with low sidelobe level and scrambled phases in other directions.