Approximation theory plays an important role in image processing, especially image deconvolution and decomposition. For piecewise smooth images, there are many methods that have been developed over the past thirty years. The goal of this study is to devise similar and practical methodology for handling textured images. This problem is motivated by forensic imaging, since fingerprints, shoeprints and bullet ballistic evidence are textured images. In particular, it is known that texture information is almost destroyed by a blur operator, such as a blurred ballistic image captured from a low-cost microscope. The contribution of this work is twofold: first, we propose a mathematical model for textured image deconvolution and decomposition into four meaningful components, using a high-order partial differential equation approach based on the directional mean curvature. Second, we uncover a link between functional analysis and multiscale sampling theory, e.g., harmonic analysis and filter banks. Both theoretical results and examples with natural images are provided to illustrate the performance of the proposed model. 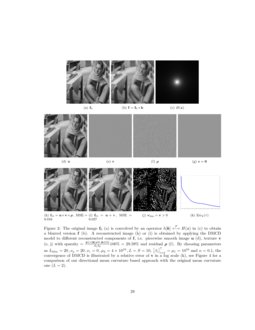 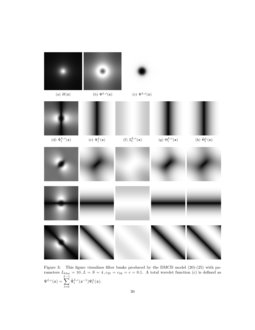 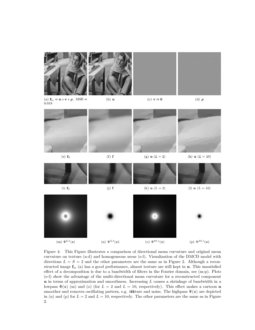 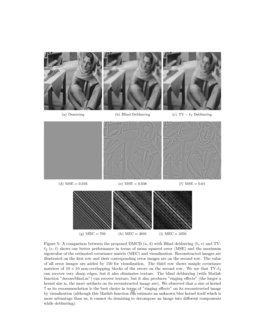 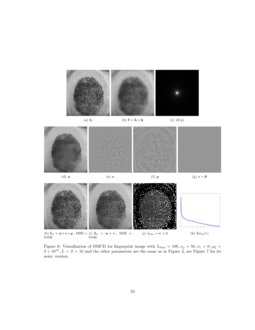 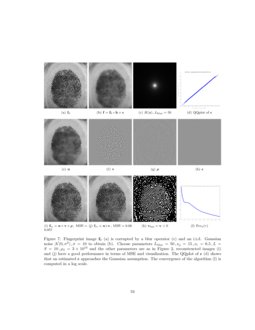 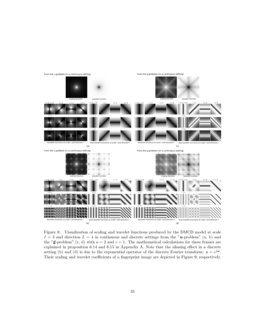 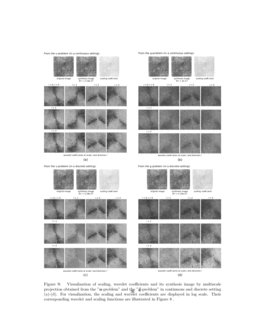 We consider the task of image decomposition and we introduce a new model...
Duy Hoang Thai, et al. ∙

Processing textured images is difficult, but such images are common in many applications. For example, as part of the 2015-2016 forensic statistics program at the Statistical and Applied Mathematical Sciences Institute, much of the research dealt with images of fingerprints, balistic striations on bullets, and shoeprints, and all of these are typically textured.

Instead of being piecewise smooth, textured images have fine scale discontinuities, so that neighboring pixels in the image may take very different values in gray scale or color space. Examples are a shoeprint in sand, where the grainy structure of the sand provides the texture, or a fingerprint on leather, where the leather’s texture interacts with the signal, see [28].

To demix (i.e., to simultaneously deblur and decompose) textured images, we substantially extend the work in Thai and Gottschlich [29]. That paper provided a directional decomposition of gray-scale images f into three parts, consisting of piecewise smooth structure u, texture v, and fine scale residual structure ρ. The solution required minimization of the directional total variation norm, which entails the solution to a second-order partial differential equation.

The new approach is based upon [30], and also focuses upon gray-scale images. But now it decomposes the image f into four parts, adding fine-scale noise structure ϵ to the previous three distinctions. It also models a blur operator h (for simplicity, h is assumed to be known, which is reasonable since in principle it can be measured for any camera in a specific application). Thus the demixing problem is formulated as

where ∗ is a convolution operator.

The solution minimizes a function of several well-chosen norms and uses directional mean curvature rather than a directional decomposition. This entails solution of a fourth-order partial differential equation (cf. Zhu and Chan [6, 22]) which addresses the “staircase effect” in the TV-L2 model [3]. Other high-order partial differential equation (PDE) approaches for image reconstruction are given in [31, 32, 33, 34, 35]. Importantly, this work finds a new connection between the minimization problem in demixing and multiscale harmonic analysis. This connection enables a more general theory and a new solution strategy.

Our model realistically reflects the mechanism of image capture. The true image is a combination of both smooth regions, texture, and fine scale structure. Blurring is inevitable, and the additive noise term accounts for other distortions (e.g., threshold variation in the CMOS or CCD light sensors, edge effects between pixels). The reconstruction error (the pixel-wise difference between the true image and the estimated image) is especially useful since it permits a quantitative basis for comparing the quality of demixing algorithms. When two algorithms make comparable assumptions about smoothness and the blur operator, then any structure that persists after demixing appears in the reconstruction error. Its mean squared error, or the eigenvalues of the estimated covariance matrix, enable one to determine which algorithm has successfully extracted more signal.

Despite the ability of the Euler-Lagrange equations associated with the variational model to achieve advanced performance in image analysis, numerical solution of this high order PDE is difficult. Following [22, 34], a numerical augmented Lagrangian method (ALM) is applied to split the directional mean curvature norm into several ℓ2- and ℓ1-norms, which are solvable by iterative shrinkage/thresholding (IST) algorithms [36, 37, 38]. Wu et al. [39] proved the equivalence between ALM, dual methods (e.g., Chambolle’s projection [40]), and the splitting Bregman method [8] for solving the convex optimization. (Note that ALM or the splitting Bregman method can be employed in the Douglas-Rachford splitting scheme [41].)

We focus on understanding the advantages of the fourth-order PDE approach to reconstruct a smooth image with sharp edges, and make two contributions:

This employs a novel Directional Mean Curvature Demixing (DMCD) method for textured images corrupted by i.i.d. noise with a given blur kernel.

To develop these ideas, section 2 introduces the mathematical framework, and section 3 describes the use of directional mean curvature for demixing and the algorithm needed to fit the model. Section 4 makes a quantitative comparison between the demixing results from the proposed algorithm and results from a standard alternative algorithm. Section 5 describes the new model’s correspondence with multiscale harmonic analysis. Section 6 summarizes our conclusions. For readability, mathematical proofs are provided in the Appendix and we also refer the reader to [42, 29, 43, 44] for more detailed notation and literature review.

Given a discrete grayscale image f[k]:Ω→R+ of size d1×d2, with the lattice

let X be the Euclidean space whose dimension is given by the size of the lattice Ω; i.e., X=R\absΩ

where the Fourier coordinates ω∈[−π,π]2 are defined on the lattice as

We let z=[z1,z2]=[ejω1,ejω2] denote the discrete coordinates of the Fourier transform.

the directional forward and backward difference operators (with periodic boundary condition and direction l=0,…,L−1) in a matrix form, i.e. ∂±lf=[∂±lf[k]]k∈Ω∈X, are

The transposed matrices of D2 and D1 are DT2 and DT1, respectively. Their adjoint operators are (∂±l)∗=−∂∓l.

The directional gradient and divergence operators are, respectively,

The directional Laplacian operator is

Remind that given x∈R2, the impulse responses of directional derivative and directional Laplacian operators in a continuous setting are

with (ωx,ωy) are continuous version of (ω2,ω1) which is numerically used instead.

Extending [45, 46, 47], and due to the discrete nature of images, Thai and Gottschlich [29] defines the discrete directional GS-norm with S∈N+ in the anisotropic version as

Since natural images are better described in terms of multi-scale and multi-direction, we apply the curvelet transform [10, 9, 12] instead of the wavelet transform in the dual Besov space, see [44, 29]. Motivated by the Dantzig selector [48], Aujol and Chambolle [46] and Thai and Gottschlich [29], find that the residual ϵ is better captured by \normC{⋅}ℓ∞ (bounded by a constant ν) in the curvelet domain, which can be represented by an indicator function on a feasible convex set G(ν)={ϵ∈X : \normC{ϵ}ℓ∞≤ν} as

This measure controls the maximum curvelet coefficient of the residual ϵ. Due to the curvlet transform, no assumption on the kind of noise is needed (e.g. Gaussian, Laplacian or weakly correlated noise), see [43, 42]. Following [49], Thai and Gottschlich [44] proposes a threshold based on extreme value theory for (2). Note that if ϵ

is normally distributed, the random variable

\normC{ϵ}ℓ∞ has the Gumbel distribution (since the curvelet of a Gaussian process is weakly correlated), see [49]. In general, for correlated noise, its distribution is a max-stable process [50, 51].

It is known that the solution of ℓ1 minimization is a shrinkage operator, see [36, 37, 52]. It can be defined in a matrix form as

with the point-wise operators. For example, a multiply pointwise operator of functions f,d∈X is f⋅×d=[f[k]d[k]]k∈Ω. The discrete convolution of two functions f,g∈X is defined in a matrix form as

Given a curvelet transform C and its inverse version C∗ [10] and a function f, the curvelet shrinkage thresholding operator CST(⋅,⋅) is defined as

We assume that the original image f, which consists of piecewise smooth regions u, texture v and fine scale structure ρ, is blurred by the operator h and corrupted by noise ϵ as

Instead of the total variation norm [3], and following the higher order approaches [58, 31, 6, 22, 59], we propose a discrete directional mean curvature (DMC) norm to reconstruct the piecewise-smooth image u as

As in the DG3PD model [29], and following the image generation mechanism shown in Fig. 1, we define the discrete DMCD model for image deconvolution and decomposition problem as

Following [44, 47, 46, 29, 60, 45, 9], the discrete directional GS-norm measures texture in several directions, and the dual of a generalized Besov space in the curvelet domain C captures the residual structure ρ and noise ϵ. Note that the ℓ∞

-norm of the curvelet transform is a good measure for fine scale oscillating patterns (i.e., residual structure and noise), which can be either independent or “weakly” correlated and need not follow a Gaussian distribution. The

GS-norm for texture is handled by the approach of Vese and Osher [47]. According to Meyer [45] (or [61]), the oscillating components do not have small L2 or L1-norm.

From the definition of the directional GS-norm (1) and the curvelet space for noise measurement (2), the constrained minimization (3) is rewritten as

with the indicator function on its feasible convex set

and the Lagrange function is

Due to multi-variable minimization, the numerical solution of (5) is obtained by applying the alternating directional method of multipliers through iteration τ=1,2,… to find

Let \boldmathδ denote the matrix-valued Dirac delta function evaluated at \boldmathk∈Ω. Then a solution of (7) is

α, one can choose an adaptive μ2 at each iteration τ as

The “→r-problem”: Fix and solve

The “→t-problem”: Fix and solve

Note that D(z) is similar to the auto-correlation function in the Riesz basis [62].

The “→y-problem”: Fix and solve