Eltwise layer is a commonly used structure in the multi-branch deep learning network. In a filter-wise pruning procedure, due to the specific operation of the eltwise layer, all its previous convolutional layers should vote for which filters by index should be pruned. Since only an intersection of the voted filters is pruned, the compression rate is limited. This work proposes a method called Directed-Weighting Group Lasso (DWGL), which enforces an index-wise incremental (directed) coefficient on the filterlevel group lasso items, so that the low index filters getting high activation tend to be kept while the high index ones tend to be pruned. When using DWGL, much fewer filters are retained during the voting process and the compression rate can be boosted. The paper test the proposed method on the ResNet series networks. On CIFAR-10, it achieved a 75.34 and a 52.06 ImageNet, it achieved a 53 increment, speeding up the network by 2.23 times. Furthermore, it achieved a 75 network by 4 times. 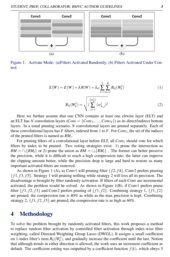 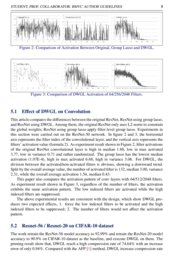 Deep convolutional neural networks (CNNs) have recently achieved great success in many visual recognition tasks. Many works have been proposed to compress large CNNs or directly learn more efficient CNN models for fast inference. However, the eltwise layer’s eltwise operation largely limits the network pruning ability. It is one of the important problems that need to be solved and also the purpose of this research.

Among deep neural network model compression and acceleration, parametric pruning is one of the commonly used methods. It achieves model compression by removing redundant and less informed weights from the trained network [Yu et al.(2017)Yu, Wang, Pan, and Tao]. It is robust to various settings, can achieve good performance, and support both training from scratch and pre-trained models [Yu et al.(2017)Yu, Wang, Pan, and Tao]

. Srinivas and Babu had proposed a neuron-oriented pruning method by studying the redundancy between neurons

CNN network with branch structure usually brings better performance, and convolution-eltwise is a commonly used module in branched CNN. Due to the specific operation of the eltwise layer, all its previous convolutional layers should vote for which filters by index should be pruned. Since only an intersection of the votes is pruned, the pruning ability is limited. One typical branched CNN is the ResNet [He et al.(2016)He, Zhang, Ren, and Sun]. Many pruning studies use the ResNet as an example to verify the effectiveness of their pruning methodology. One consensus has been reached that it is difficult to deeply prune ResNet [Luo and Wu(2017), Ullrich et al.(2017)Ullrich, Meeds, and Welling]. There are many works that have studied ResNet pruning. Wu et alproposed the SqueenzeDet [Wu et al.(2017)Wu, Iandola, Jin, and Keutzer]. Huang et alproposed a random depth network pruning method [Huang et al.(2016)Huang, Sun, Liu, Sedra, and Weinberger]. Ullrich et alproposed a simple regularization method based on soft weight-sharing, which included both quantization and pruning in one simple (re-)training procedure [Ullrich et al.(2017)Ullrich, Meeds, and Welling]. Wang et alused successive incremental coefficients for group lasso items in different fine tuning iterations [Wang et al.(2018)Wang, Zhang, Wang, and Hu]. The method addressed the problem that ResNet’s initial pruning cannot withstand large penalty items. Ding et alproposed the AFP method which divided different filters of the same convolutional layer into two groups named reserved/removed [Ding et al.(2018)Ding, Ding, Han, and Tang]. AFP assigned different coefficients on L1-norm of filters during training and later pruned the removed group. Our method assigns different coefficients for different group lasso items, and it is similar to [Wang et al.(2018)Wang, Zhang, Wang, and Hu] and [Ding et al.(2018)Ding, Ding, Han, and Tang]. The differences lay in the problem to be solved and the design of coefficient setting. Our method assigns coefficients using an index related function for each filter of the same convolutional layer in one fine-tuning round, and its purpose is to increase the compression rate of CNNs having convolution-eltwise modules like ResNet.

Following the definition of group lasso constraints on CNN in [Wen et al.(2016)Wen, Wu, Wang, Chen, and Li], set Wlk as the k-th filter, E(W) as the loss on data, R(W) as non-structured regularization (e.g. l2-norm), RG(Wlk) as filter-wise group lasso. λ and λG are empirical coefficients on corresponding items. The generic optimization target is shown as formula 1. RG(Wlk) is the square root of the sum of j-th weight w(k,j)l in filter k of layer l, as shown in formula 2. Group lasso can effectively zero out all weights in groups, thus filter-wise group lasso would zero out a whole filter and then the filter is removed from the convolution layer. This work also uses formula 2 as the measure of filter activation.

Here we further assume that one CNN contains at least one eltwise layer (ELT) and an ELT has N convolution layers (Conv={Conv1,…,ConvN}) as its direct/indirect bottom layers. In a usual pruning scenario, N convolutional layers are pruned separately. Each of these convolutional layers has F filters, indexed from 1 to F. For Convi, the set of the indices of the pruned filters is named as RMi.

For pruning filters of a convolutional layer before ELT, all Convi should vote for which filters by index to be pruned. Two voting strategies exist: 1) prune the intersection as RM=∩i{RMi} or 2) prune the union as RM=∪i{RMi} . The former can better preserve the precision, while it is difficult to reach a high compression rate; the latter can improve the clipping amount better, while the precision drop is large and hard to restore as many important activated filters are removed.

As shown in Figure 1 (A), as Conv1 will pruning filter {f2,f4}, Conv2 prefers pruning {f1,f3,f5}. Strategy 1 will pruning nothing while strategy 2 will loss all its precision. The disadvantage is brought by filter randomly activation. If filters of each Conv are incremental activated, the problem would be solved. As shown in Figure 1(B), if Conv1 prefers prune filter {f1,f2,f3} and Conv2 prefers pruning of {f1,f2}. Combining strategy 1, {f1,f2} are pruned, the compression rate is 40% as while as the max precision is kept. Combining strategy 2, {f1,f2,f3} are pruned, the compression rate is as high as 60%.

To solve the problem brought by randomly activated filters, this work proposes a method to replace random filter activation by controlled filter activation through index-wise filter weighting, called Directed-Weighting Group Lasso (DWGL). It assigns a small coefficient on 1-index filter’s item RG(Wlk), and gradually increase the coefficient until the last. Notion that although trends in either direction is allowed, the work uses an increment coefficient as default. The coefficient setting was outputted by a coefficient function f(k), which obeys 5 basic rules as detailed in methodology section. The modified formula is shown as formula 3. For simplify, this work named the Layer L’ sum of filter-wise group lasso as TlG(W) in formula 4.

The design of f(k) requires the following five principles.

Based on above 5 rules, the coefficient function f(k) is designed as formula 5. In formula 5, the softmax style formula meets principle 1, 2 and 3. The value 9.22 scales the range of f(k), which better fits principle 4. The ratio 9.22kK guarantees the principle 5.

The pruning process is consistent with the way provided by [Ding et al.(2018)Ding, Ding, Han, and Tang], and here will not be described again.

In this section, the work first analyzes the actual impact of DWGL on one single convolutional layer, which proves that DWGL can force controlled decremental activation. Secondly, it verifies its effect by applying the Resnet-56 and Resnet-20 model on CIFAR-10 dataset and the Resnet-50 model on ImageNet dataset respectively, which proves that DWGL can release speed acceleration and good final performance.

. All of the following experiments use Caffe as the experimental framework. Each experiment use four Nvidia P40 GPU as the training and testing hardware.

5.1 Effect of DWGL on Convolution

This article compares the differences between the original ResNet, ResNet using group lasso, and ResNet using DWGL. Among them, the original ResNet only uses L2-norm to constrain the global weights; ResNet using group lasso apply filter level group lasso. Experiments in this section were carried out on the ResNet-50 network. In figure 2 and 3, the horizontal axis represents the filter index of the convolutional layer, and the vertical axis represents the filters’ activation value (formula 2). As experiment result shown in Figure 2, filter activations of the original ResNet convolutional layer is high in median 1.88, low in max activated 3.77, low in variance 0.71 and rather randomized. The group lasso has the lowest median activation (1.07E-4), high in max activated 6.68, high in variance 3.06. For DWGL, the division between the activated/non-activated filters is obvious, showing a downward trend. Split by the overall average value, the number of activated filter is 132, median 3.00, variance 2.31, while the overall average activation 1.54, median 0.43.

The work retrain the ResNet-56 model accuracy to 92.99% and retrain the ResNet-20 model accuracy to 90.9% on CIFAR-10 dataset as the baseline, and execute DWGL on them. The pruning result show that, DWGL reach a high compression rate of 74.64% with an increase error of only 0.94%. Compared with the AFP [Ding et al.(2018)Ding, Ding, Han, and Tang] method, DWGL increase compression rate by 14.48%, while causing less increased error by 0.06%. At the same time, DWGL shows more potential, when the pruning reached an increased error of 1.05%, the compression rate could be as much as 80%.

This paper proposes directed-weighting group lasso method for pruning of eltwise blocked CNNs, called DWGL. DWGL solves the pruning problem that brought by the random filter activation and eltwise operation in convolution-eltwise modules through controlled filter activation. Although reported only on ResNet, this method is widely applicable to deep CNN networks with eltwise layers. This method can raise the compression rate with little/no increased error. The method never refuses to combine other accelerating method like quantization, so the pruning performance may be further boosted. The weakness of DWGL is that, like all other parameter pruning methods, DWGL requires iteratively pruning and fine-tuning, which usually take a longer time. In the future, this issue needs continuous improvement. Since DWGL is effective and robust, how to apply its basic idea to non-CNN networks could also be further researched.