Hyperspectral images (HIS) classification is a high technical remote sensing tool. The goal is to reproduce a thematic map that will be compared with a reference ground truth map (GT), constructed by expecting the region. The HIS contains more than a hundred bidirectional measures, called bands (or simply images), of the same region. They are taken at juxtaposed frequencies. Unfortunately, some bands contain redundant information, others are affected by the noise, and the high dimensionality of features made the accuracy of classification lower. The problematic is how to find the good bands to classify the pixels of regions. Some methods use Mutual Information (MI) and threshold, to select relevant bands, without treatment of redundancy. Others control and eliminate redundancy by selecting the band top ranking the MI, and if its neighbors have sensibly the same MI with the GT, they will be considered redundant and so discarded. This is the most inconvenient of this method, because this avoids the advantage of hyperspectral images: some precious information can be discarded. In this paper we'll accept the useful redundancy. A band contains useful redundancy if it contributes to produce an estimated reference map that has higher MI with the GT.nTo control redundancy, we introduce a complementary threshold added to last value of MI. This process is a Filter strategy; it gets a better performance of classification accuracy and not expensive, but less preferment than Wrapper strategy. 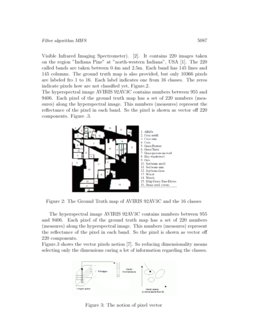 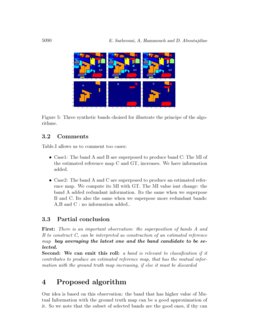 Band Selection and Classification of Hyperspectral Images using Mutual Information: An algorithm based on minimizing the error probability using the inequality of Fano

In the feature classification domain, the choice of data affects widely the results. For the Hyperspectral image, the bands don’t all contain the information; some bands are irrelevant like those affected by various atmospheric effects, see Figure.4, and decrease the classification accuracy. And there exist redundant bands to complicate the learning system and product incorrect prediction [14]. Even the bands contain enough information about the scene they may can’t predict the classes correctly if the dimension of space images, see Figure.3, is so large that needs many cases to detect the relationship between the bands and the scene (Hughes phenomenon) [10]. We can reduce the dimensionality of hyperspectral images by selecting only the relevant bands (feature selection or subset selection methodology), or extracting, from the original bands, new bands containing the maximal information about the classes, using any functions, logical or numerical (feature extraction methodology) [11][9]. Here we focus on the feature selection using mutual information. Hyperspectral images have three advantages regarding the multispectral images [6], see Figure 1.

In this paper we use the Hyperspectral image AVIRIS 92AV3C (Airborne Visible Infrared Imaging Spectrometer). [2]. It contains 220 images taken on the region ”Indiana Pine” at ”north-western Indiana”, USA [1]. The 220 called bands are taken between 0.4μm and 2.5μm. Each band has 145 lines and 145 columns. The ground truth map is also provided, but only 10366 pixels are labeled fro 1 to 16. Each label indicates one from 16 classes. The zeros indicate pixels how are not classified yet, Figure.2.

The hyperspectral image AVIRIS 92AV3C contains numbers between 955 and 9406. Each pixel of the ground truth map has a set of 220 numbers (measures) along the hyperspectral image. This numbers (measures) represent the reflectance of the pixel in each band. So the pixel is shown as vector off 220 components. Figure.3 shows the vector pixel’s notion [7]. So reducing dimensionality means selecting only the dimensions caring a lot of information regarding the classes.

We can also note that not all classes are carrier of information. In Figure. 4, for example, we can show the effects of atmospheric affects on bands: 155, 220 and other bands. This hyperspectral image presents the problematic of dimensionality reduction.

This is a measure of exchanged information between tow ensembles of random variables A and B :

Considering the ground truth map, and bands as ensembles of random variables, we calculate their interdependence.

Fano [14] has demonstrated that as soon as mutual information of already selected feature has high value, the error probability of classification is decreasing, according to the formula bellow:

Geo [3] uses also the average of bands 170 to 210, to product an estimated ground truth map, and use it instead of the real truth map. Their curves are similar. This is shown at Figure 4.

3 The principe of proposed algorithm

Now we calculate the mutual information between each of them and the GT. We compute also the MI between the GT and the superposition of C and B. The results shown at Table.1

First: There is an important observation: the superposition of bands A and B to construct C, can be interpreted as construction of an estimated reference map bay averaging the latest one and the band candidate to be selected. Second: We can emit this roll: a band is relevant to classification if it contributes to produce an estimated reference map, that has the mutual information with the ground truth map increasing, if else it mast be discarded

Our idea is based on this observation: the band that has higher value of Mutual Information with the ground truth map can be a good approximation of it. So we note that the subset of selected bands are the good ones, if thy can generate an estimated reference map, sensibly equal the ground truth map. We generate the estimated reference map by averaging the latest one and the band candidate. So it’s a Filter approach [16] [13]. Our process of band selection will be equivalent to following steps: we order the bands according to value of its mutual information with the ground truth map. Then we initialize the selected bands ensemble with the band that has highest value of MI. At a point of process, we build an approximated reference map C_est by averaging the latest one and the band candidate, and we compute the MI(C_est,GT). The latest band added (at those already selected) must make MI(C_est,GT) increasing, if else it will be discarded from the ensemble retained. Then we introduce a complementary threshold Th to control redundancy. So the band to be selected must make MI increasing by a step equal to Th. The algorithm following shows more detail of the process:

We apply this algorithm on the hyperspectral image AVIRIS 92AV3C [1], 50the labeled pixels are randomly chosen and used in training; and the other 50used for testing classification [3]. The classifier used is the SVM [5] [12] [4]. We had to choice negatives values of Th. It means that is impossible to increase accuracy of classification without allowing redundancy.

Table.2 shows the results obtained for several thresholds. We can see the effectiveness selection bands of our algorithm, and the important effect of avoiding redundancy.

Important: When we apply our algorithm on the real data, here AVIRIS 92AV3C, we note that the can’t increase the accuracy without allowing redundancy bay negatives thresholds. But the idea is good: we note that the algorithm is selective and the threshold control effectiveness the redundancy: First: For the relatively highest threshold values (-0.0035,-0,001,0,+) we obtain a hard selection: a few more informative bands are selected. Second: For the medium threshold values (-0.01, -0.005, -0.004), some redundancy is allowed, even if it’s harmful (negative values of thresholds), in order to made increasing the classification accuracy. Tired: As soon as the threshold value is more negative (-0.02), the redundancy allowed becomes useless, we have the same accuracy with more bands. Finally: for the more negative thresholds (for example -4), we allow all bands to be selected, and we have no action of the algorithm. This corresponds at selection bay ordering bands on mutual information for numerous thresholds. The performance is low. We can not here that Hui Wang [15] uses two axioms to characterize feature selection. Sufficiency axiom: the subset selected feature must be able to reproduce the training simples without losing information. The necessity axiom ”simplest among different alternatives is preferred for prediction”. In the algorithm proposed, reducing error probability between the truth map and the estimated minimize the information loosed for the samples training and also the predicate ones. We not also that we can use the number of features selected like condition to stop the search. [16].

In this paper we presented the necessity to reduce the number of bands, in classification of Hyperspectral images. Then we carried out the effectiveness of mutual information to select bands able to classify the pixels of ground truth. And also we insisted on saving the propriety of hyperspectral images regarding the multispectral images, when we reduce dimensionality. We introduce an algorithm based on mutual information. To choice a band, it must contribute to reproduce an estimated ground truth map more closed to the reference map. A complementary threshold is added to avoid redundancy. So each band retained has to reproduce an estimated ground truth map more closed to the reference map by a step equal to threshold even if it caries a redundant information. But the method used her to estimate the reference map, play an important role: here with averaging bands; we are constraint to use negative value of threshold; so we allow more redundancy. We can tell that we conserve the useful redundancy by adjusting the complementary threshold. This algorithm is a feature selection methodology, and it’s a Filter approach. It’s less expensive. It can be implemented in real time applications. This scheme is very interesting to investigate and improve, considering its performance.