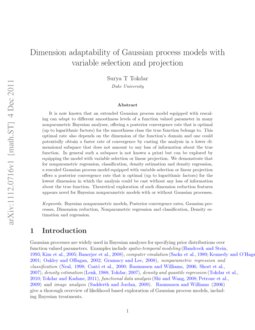 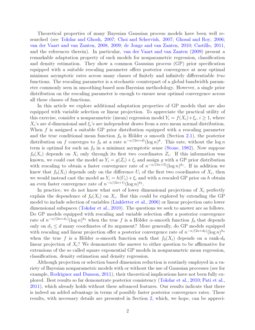 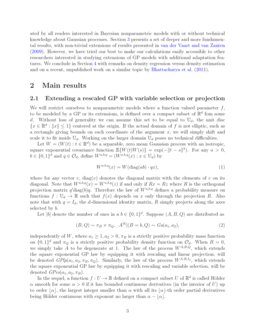 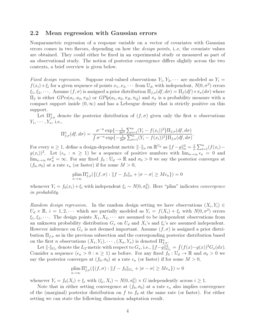 In this paper we consider the Bayes factor approach to general model and...
Minerva Mukhopadhyay, et al. ∙

Variable selection for Gaussian process regression through a sparse projection

This article is motivated by the problem of studying the joint effect of...
Federico Ferrari, et al. ∙

Gaussian Processes with Errors in Variables: Theory and Computation

As an alternative to variable selection or shrinkage in high dimensional...
Rajarshi Guhaniyogi, et al. ∙

Theoretical properties of many Bayesian Gaussian process models have been well researched (see Tokdar and Ghosh, 2007; Choi and Schervish, 2007; Ghosal and Roy, 2006; van der Vaart and van Zanten, 2008, 2009; de Jonge and van Zanten, 2010; Castillo, 2011, and the references therein). In particular, van der Vaart and van Zanten (2009) present a remarkable adaptation property of such models for nonparametric regression, classification and density estimation. They show a common Gaussian process (GP) prior specification equipped with a suitable rescaling parameter offers posterior convergence at near optimal minimax asymptotic rates across many classes of finitely and infinitely differentiable true functions. The rescaling parameter is a stochastic counterpart of a global bandwidth parameter commonly seen in smoothing-based non-Bayesian methodology. However, a single prior distribution on the rescaling parameter is enough to ensure near optimal convergence across all these classes of functions.

In this article we explore additional adaptation properties of GP models that are also equipped with variable selection or linear projection. To appreciate the practical utility of this exercise, consider a nonparametric (mean) regression model Yi=f(Xi)+ξi, i≥1, where Xi’s are d-dimensional and ξi

’s are independent draws from a zero mean normal distribution. When

f is assigned a suitable GP prior distribution equipped with a rescaling parameter and the true conditional mean function f0 is Hölder α smooth (Section 2.1), the posterior distribution on f converges to f0 at a rate n−α/(2α+d)(logn)k. This rate, without the logn term is optimal for such an f0 in a minimax asymptotic sense (Stone, 1982). Now suppose f0(Xi) depends on Xi only through its first two coordinates Zi. If this information was known, we could cast the model as Yi=g(Zi)+ξi and assign g with a GP prior distribution with rescaling to obtain a faster convergence rate of n−α/(2α+2)(logn)k1. If in addition we knew that f0(Xi) depends only on the difference Ui of the first two coordinates of Xi, then we would instead cast the model as Yi=h(Ui)+ξi and with a rescaled GP prior on h obtain an even faster convergence rate of n−α/(2α+1)(logn)k2.

Although projection or selection based dimension reduction is routinely employed in a variety of Bayesian nonparametric models with or without the use of Gaussian processes (see for example, Rodriguez and Dunson, 2011), their theoretical implications have not been fully explored. Best results so far demonstrate posterior consistency (Tokdar et al., 2010; Pati et al., 2011), which already holds without these advanced features. Our results indicate that there is indeed an added advantage in terms of possibly faster posterior convergence rates. These results, with necessary details are presented in Section 2, which, we hope, can be appreciated by all readers interested in Bayesian nonparametric models with or without technical knowledge about Gaussian processes. Section 3 presents a set of deeper and more fundamental results, with non-trivial extensions of results presented in van der Vaart and van Zanten (2009). However, we have tried our best to make our calculations easily accessible to other researchers interested in studying extensions of GP models with additional adaptation features. We conclude in Section 4 with remarks on density regression versus density estimation and on a recent, unpublished work on a similar topic by Bhattacharya et al. (2011).

2.1 Extending a rescaled GP with variable selection or projection

We will restrict ourselves to nonparametric models where a function valued parameter f, to be modeled by a GP or its extensions, is defined over a compact subset of Rd fom some d. Without loss of generality we can assume this set to be equal to Ud, the unit disc {x∈Rd:∥x∥≤1} centered at the origin. If the actual domain of f is not elliptic, such as a rectangle giving bounds on each coordinate of the argument x, we will simply shift and scale it to fit inside Ud. Working on the larger domain Ud poses no technical difficulties.

where for any vector

v, diag(v) denotes the diagonal matrix with the elements of v on its diagonal. Note that Wa,b,q(x)=Wa,b,q(z) if and only if Rx=Rz where R is the orthogonal projection matrix q′diag(b)q. Therefore the law of Wa,b,q

defines a probability measure on functions

f:Ud→R such that f(x) depends on x only through the projection R. Also note that with q=Id, the d

R simply projects along the axes selected by b.

is a strictly positive probability density function on

In the sequel, a function f:U→R defined on a compact subset U of Rd is called Hölder α smooth for some α>0 if it has bounded continuous derivatives (in the interior of U) up to order ⌊α⌋, the largest integer smaller than α with all its ⌊α⌋-th order partial derivatives being Hölder continuous with exponent no larger than α−⌊α⌋.

Nonparametric regression of a response variable on a vector of covariates with Gaussian errors comes in two flavors, depending on how the

design points, i..e, the covariate values are obtained. They could either be fixed in an experimental study or measured as part of an observational study. The notion of posterior convergence differs slightly across the two contexts, a brief overview is given below.

Suppose real-valued observations Y1,Y2,⋯ are modeled as Yi=f(xi)+ξi for a given sequence of points x1,x2,⋯ from Ud, with independent, N(0,σ2) errors ξ1,ξ2,⋯. Assume (f,σ) is assigned a prior distribution Πf,σ(df,dσ)=Πf(df)×πσ(dσ) where Πf is either GPvs(a1,a2,πB) or GPlp(a1,a2,πB,πQ) and πσ is a probability measure with a compact support inside (0,∞) and has a Lebesgue density that is strictly positive on this support.

Let Πnf,σ denote the posterior distribution of (f,σ) given only the first n observations Y1,⋯,Yn, i.e.,

are assumed to be independent observations from an unknown probability distribution

Gx on Ud and Xi’s and ξi’s are assumed independent. However inference on Gx is not deemed important. Assume (f,σ) is assigned a prior distribution Πf,σ as in the previous subsection and the corresponding posterior distribution based on the first n observations (X1,Y1),⋯,(Xn,Yn) is denoted Πnf,σ.

Note that in either setting convergence at (f0,σ0) at a rate ϵn also implies convergence of the (marginal) posterior distribution on f to f0 at the same rate (or faster). For either setting we can state the following dimension adaptation result.

is the standard normal or the logistic cumulative distribution function, with

Xi’s assumed to be independent draws from a probability distribution Gx on Ud. Assume f is assigned a prior distribution Πf which is either GPvs(a1,a2,πB) or GPlp(a1,a2,πB,πQ), and let Πnf denote the corresponding posterior distribution based on the first n observations (X1,Y1),⋯,(Xn,Yn), i.e.,

Consider observations Xi∈Ud, i=1,2,⋯ modeled as independent draws from a probability density g on Ud that can be written as

for some fixed, non-negative function g∗ and some unknown f:Ud→R. This type of models also arise in analyzing spatial point pattern data with non-homogeneous Poisson process models where the intensity function is expressed as g∗(x)exp(f(x)). Assume f is assigned the prior distribution Πf which is either GPvs(a1,a2,πB) or GPlp(a1,a2,πB,πQ), and let Πg denote the induced prior distribution on g. The corresponding posterior distribution based on X1,⋯,Xn is given by

Consider a sequence (ϵn>0:n≥1) as before. For any fixed density g0 on Ud, we say the posterior converges at g0 at a rate ϵn (or faster) if for some M>0,

whenever Xi’s are independent draws from g0.

In the above theorem, the conditions on f0 are equivalent to saying that g0(x)/g∗(x) varies in x only along a linear subspace of the variable x. In the context of two dimensional point patter models, this implies that the intensity function, relative to g∗, is constant over the spatial domain or constant along a certain direction.

Consider again observations (Xi,Yi)∈Ud×R, i=1,2,⋯ where we want to develop a regression model between Yi’s and Xi’s. In density regression the entire conditional density, and not just the conditional mean of Yi given Xi is modeled nonparametrically. Tokdar et al. (2010) consider the model Yi|Xi∼g(⋅|Xi), independently across i, where the conditional densities g(⋅|x), x∈Ud are given by point by point logistic transforms of a function f:Ud×[0,1]→R:

for some fixed probability density g∗ on R with cumulative distribution function G∗. To construct a suitable prior distribution for f, we consider an extension of the process Wa,b,q.

, provide a set of three sufficient conditions that can be used to establish posterior convergence rates for Bayesian non-parametric models for independent observations. One of these conditions relates to prior concentration at the true function, and the other two relate to existence of a sequence of compact sets which have relatively small sizes but receive large probabilities from the prior distribution.

For the results stated in Theorems 1, 2 and 3 relating respectively to mean regression, classification or density estimation, these three sufficient conditions map one to one (van der Vaart and van Zanten, 2008) to the following conditions on an extended GP ~W with law GPvs(a1,a2,πB) or GPlp(a1,a2,πB,πQ) as appropriate, the true function f0 and the desired rate ϵn: there exist sets Bn⊂RUd and a sequence (~ϵ>0:n≥1) with ~ϵn<ϵn, limn→∞n~ϵ2n=∞ such that for all sufficiently large n,

where N(ϵ,B,ρ) denotes the minimum number of balls of radius ϵ (with respect to a metric ρ) needed to cover a set B. For the density regression results stated in Theorem 4, the sufficient conditions also map one to one to the above but with ~W now following either GPvs∗(a1,a2,πB) or GPlp∗(a1,a2,πB,πQ) and with Bn⊂RUd×[0,1]. This can be proved along the lines of Theorem 3.2 of van der Vaart and van Zanten (2008), by looking at the joint density of (Xi,Yi) determined by Gx and g∼Πg.

We verify these conditions in the following subsections by extending the calculations presented in van der Vaart and van Zanten (2009). A fundamental ingredient of these calculations is the reproducing kernel Hilbert space (RKHS) associated with a Gaussian process. The RKHS of W is defined as the set of functions h:Rd→R that can be represented as h(t)=E{W(t)L} for some L in the closure of {V=a1W(t1)+⋯+akW(tk):k≥1,ai∈R,ti∈Rd}. Similar definitions apply to the processes Wa,b,q and Za,b,q with domains Ud and Ud×[0,1] instead of Rd.

2Id. The RKHS norm of such an h is precisely ∥ψ∥L2(μ).

By simple change of variables it follows that the RKHS of Wa,b,q, for any a>0,b∈{0,1}d and q∈Od, is given by functions h such that h(x)=Re{∫ei(λ,x)ψ(λ)dμa,b,q(λ)} with RKHS norm ∥ψ∥L2(μa,b,q) where μa,b,q is the d-dimensional Gaussian probability measure with mean 0 and variance matrix 2a2q′diag(b)q. In the rest of the paper this RKHS is denoted Ha,b,q and Ha,b,q1 is used to denote its unit ball at the origin. Also, B is used to denote the Banach space of continuous functions on Ud equipped with the supremum norm ∥⋅∥∞. The unit ball at origin of this space is denoted B1.

To start with let Wa,b denote Wa,b,q with q fixed at the d-dimensional identity matrix and let Ha,b stand for the corresponding RKHS Ha,b,q. For any b∈{0,1}d and x∈Ud let xb denote the |b|-dimensional vector of coordinates of x selected by b. Also for any α>0 and any ~d∈{0,⋯,d} let Hα,~d denote the class of Hölder α-smooth, real functions on U~d. Notice that if f0(x) depends only on d1 many coordinates of x then there exist b0∈{0,1}d with |b0|=d1 and v0∈Hα,d1 such that f0(x)=v0(xb0) for all x∈Ud.