We consider the task of detecting regulatory elements in the human genome directly from raw DNA. Past work has focused on small snippets of DNA, making it difficult to model long-distance dependencies that arise from DNA's 3-dimensional conformation. In order to study long-distance dependencies, we develop and release a novel dataset for a larger-context modeling task. Using this new data set we model long-distance interactions using dilated convolutional neural networks, and compare them to standard convolutions and recurrent neural networks. We show that dilated convolutions are effective at modeling the locations of regulatory markers in the human genome, such as transcription factor binding sites, histone modifications, and DNAse hypersensitivity sites. 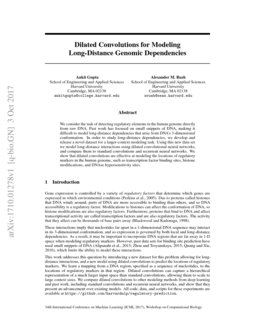 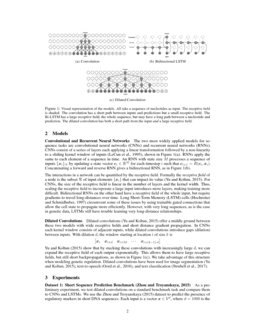 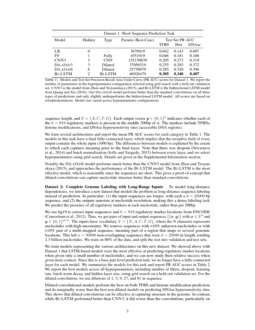 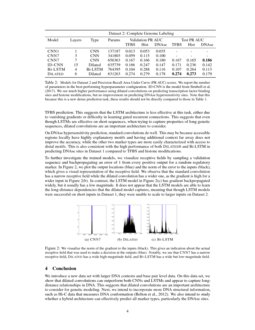 i6mA-CNN: a convolution based computational approach towards identification of DNA N6-methyladenine sites in rice genome

In this paper, we propose the Neural Knowledge DNA, a framework that tai...
Haoxi Zhang, et al. ∙

The inversion distance, that is the distance between two unichromosomal ...
Eyla Willing, et al. ∙

Sequencing by Emergence: Modeling and Estimation

Gene expression is controlled by a variety of regulatory factors that determine which genes are expressed in which environmental conditions (Perkins et al., 2005). Due to proteins called histones that DNA winds around, parts of DNA are more accessible to binding than others, and so DNA accessibility is a regulatory factor. Modifications to histones can affect the conformation of DNA, so histone modifications are also regulatory factors. Furthermore, proteins that bind to DNA and affect transcriptional activity are called transcription factors and are also regulatory factors. The activity that they affect can be thousands of base pairs away (Blackwood and Kadonaga, 1998).

These interactions imply that nucleotides far apart in a 1-dimensional DNA sequence may interact in its 3-dimensional conformation, and so expression is governed by both local and long-distance dependencies. As a result, it may be important to incorporate DNA regions that are far away in 1-D space when modeling regulatory markers. However, past data sets for binding site prediction have used small snippets of DNA (Alipanahi et al., 2015; Zhou and Troyanskaya, 2015; Quang and Xie, 2016), which limits the ability to model these interactions.

This work addresses this question by introducing a new dataset for this problem allowing for long-distance interactions, and a new model using dilated convolutions to predict the locations of regulatory markers. We learn a mapping from a DNA region, specified as a sequence of nucleotides, to the locations of regulatory markers in that region. Dilated convolutions can capture a hierarchical representation of a much larger input space than standard convolutions, allowing them to scale to large context sizes. We compare dilated convolutions to other modeling methods from deep learning and past work, including standard convolutions and recurrent neural networks, and show that they present an advancement over existing models. All code, data, and scripts for these experiments are available at

The two most widely applied models for sequence tasks are convolutional neural networks (CNNs) and recurrent neural networks (RNNs). CNNs consist of a series of layers each applying a linear transformation followed by a non-linearity to a sliding kernel window of inputs

(LeCun et al., 1995), shown in Figure 1(a). RNNs apply the same to each element of a sequence in time. An RNN with state size M processes a sequence of inputs {\boldxi}N

by updating a state vector

\boldci∈RM for each timestep i such that \boldci+1=R(\boldci,\boldxi). Concatenating a forward and reverse RNN gives a bidirectional RNN, as in Figure 1(b).

. For CNNs, the size of the receptive field is linear in the number of layers and the kernel width. Thus, scaling the receptive field to incorporate a large input introduces more layers, making training more difficult. Bidirectional RNNs on the other hand have a receptive field of the whole input, but require gradients to travel long-distances over time. Long Short-Term Memory (LSTM) cells

(Hochreiter and Schmidhuber, 1997) circumvent some of these issues by using trainable gated connections that allow the cell state to propagate more efficiently. However, with very long sequences, as is the case in genetic data, LSTMs still have trouble learning very long-distance relationships.

Dilated convolutions (Yu and Koltun, 2015) offer a middle ground between these two models with wide receptive fields and short distance gradient propagation. In CNNs each kernel window consists of adjacent inputs, while dilated convolutions introduce gaps (dilation) between inputs. With dilation d, the window starting at location i of size k is

As a preliminary experiment, we test dilated convolutions on a standard benchmark task and compare them to CNNs and LSTMs. We use the Zhou and Troyanskaya (2015) dataset to predict the presence of regulatory markers in short DNA sequences. Each input is a vector \boldx∈\mcVd, where d=1000 is the sequence length, and \mcV={A,C,T,G}. Each output vector \boldy∈{0,1}k indicates whether each of the k=919 regulatory markers is present in the middle 200bp of \boldx. The markers include TFBSs, histone modifications, and DNAse hypersensitivity sites (accessible DNA regions).

We train several architectures and report the mean PR AUC scores for each category in Table 1. The models in this task have a final fully-connected layer, which implies that the receptive field of every output contains the whole input (1000 bp). The differences between models is explained by the extent to which each captures meaning prior to the final layer. Note that there was dropout (Srivastava et al., 2014)

between every layer, and we select hyperparameters using grid search. Details are given in the Supplemental Information section.

Notably the Dilated6 model performs much better than the CNN3 model from Zhou and Troyanskaya (2015), and approaches the performance of the Bi-LSTM model. The Bi-LSTM is the most effective model, which is reasonable since the sequences are short. This gives a proof-of-concept that dilated convolutions can capture nucleotide structure better than standard convolutions.

To model long-distance dependencies, we introduce a new dataset that models the problem as long-distance sequence labeling instead of prediction. In particular: (1) the input sequences are longer, with each a d=25000 bp sequence, and (2) the outputs annotate at nucleotide-resolution, making this a dense labeling task. We predict the presence of all regulatory markers at each nucleotide, rather than per 200bp.

We use hg19 to extract input sequences and k=919 regulatory marker locations from ENCODE (Consortium et al., 2012). Thus, we get pairs of input and output sequences {(\boldx,\boldy)} with \boldx∈\mcVd and \boldy∈{0,1}d×k. The inputs have vocabulary \mcV={N,A,C,T,G}, where the N character represents nucleotides with high uncertainty. We remove sequences with >10% unknown nucleotides or with >10% part of a multi-mapped sequence, meaning part of a region that maps to several genomic locations. This left n=93880 non-overlapping sequences that were d=25000 in length, totaling 2.3 billion nucleotides. We train on 80% of the data, and split the rest into validation and test sets.

We train models representing the various architectures on this new dataset. We showed above with Dataset 1 that LSTM-based models were the most effective at predicting regulatory marker locations when given only a small number of nucleotides, and we can now study their relative success when given more context. Since this is a base-pair level prediction task, we no longer have a fully-connected layer for each model. We summarize the models for this task and report PR AUC scores in Table 2. We report the best models across all hyperparameters, including number of filters, dropout, learning rate, batch norm decay, and hidden layer size, using grid search on a held-out validation set. For the dilated convolution, we use dilations of 1, 3, 9, 27, and 81 in sequence.

Dilated convolutional models perform the best on both TFBS and histone modification prediction, and do marginally worse than the best non-dilated models on predicting DNAse hypersensitivity sites. This shows that dilated convolutions can be effective at capturing structure in the genome. In contrast, while Bi-LSTM performed better than CNN3, it did worse than the convolutions, particularly on TFBS prediction. This suggests that the LSTM architecture is less effective at this task, either due to vanishing gradients or difficulty in learning gated recurrent connections. This suggests that even though LSTMs are effective on short sequences, when trying to capture properties of long genetic sequences, dilated convolutions are an important architecture to consider.

On DNAse hypersensitivity prediction, standard convolutions do well. This may be because accessible regions locally have highly explanatory motifs and having additional context far away does not improve the accuracy, while the other two marker types are more easily characterized with access to distal motifs. This is also consistent with the high performance of both Dilated6 and Bi-LSTM in predicting DNAse sites in Dataset 1 compared to TFBS and histone modifications.

To further investigate the trained models, we visualize receptive fields by sampling a validation sequence and backpropagating an error of 1 from every positive output for a random regulatory marker. In Figure 2, we plot the output locations (blue) and the norm of the error to the inputs (black), which gives a visual representation of the receptive field. We observe that the standard convolution has a narrow receptive field while the dilated convolution has a wider one, as the gradient is high for a wider input in Figure 2(b). In contrast, the LSTM model in Figure 2(c) has gradient backpropagated widely, but it usually has a low magnitude. It does not appear that the LSTM models are able to learn the long-distance dependencies that the dilated model captures, meaning that though LSTM models were successful on short inputs in Dataset 1, they were unable to scale to larger inputs on Dataset 2.

We introduce a new data set with larger DNA contexts and base pair level data. On this data set, we show that dilated convolutions can outperform both CNNs and LSTMs and appear to capture long-distance relationships in DNA. This suggests that dilated convolutions are an important architecture to consider for genetic modeling. Next, we intend to incorporate more DNA structural information, such as Hi-C data that measures DNA conformation (Belton et al., 2012). We also intend to study whether a hybrid architecture can effectively predict all marker types, particularly the DNAse sites.

We thank David Kelley for his insights on the biological mechanisms behind these regulatory factors, the necessary steps to pre-process ENCODE data, and his general guidance in interpreting the results of this work.

We summarize the high-level architecture that we use for this task in Figure 3 with an example with two convolutional layers. All of the models have the same input representation, and have fully-connected layers at the end. The differences between the models exists between the Input and Flatten layers of Figure 3

, as each model uses a different type of convolutional layer and one uses a bidirectional LSTM. Note that in the logistic regression and multilayer perceptron models, we directly flatten the inputs and use fully-connected layers, rather than first applying convolutions.

We summarize the high-level architecture of this task in Figure 4. The differences between the models we implement for this task exists between the Embedding and first Linear (fully-connected) layer of Figure 4. In contrast with Dataset 1, we are now making dense predictions, meaning one set of predictions for every nucleotide in the input sequence, which leads to a different model structure.