Digraph of Senegal s local languages: issues, challenges and prospects of their transliteration

The local languages in Senegal, like those of West African countries in general, are written based on two alphabets: supplemented Arabic alphabet (called Ajami) and Latin alphabet. Each writing has its own applications. Ajami writing is generally used by people educated in Koranic schools for communication, business, literature (religious texts, poetry, etc.), traditional religious medicine, etc. Writing with Latin characters is used for localization of ICT (Web, dictionaries, Windows and Google tools translated in Wolof, etc.), the translation of legal texts (commercial code and constitution translated in Wolof) and religious ones (Quran and Bible in Wolof), book edition, etc. To facilitate both populations general access to knowledge, it is useful to set up transliteration tools between these two scriptures. This work falls within the framework of the implementation of project for a collaborative online dictionary Wolof (Nguer E. M., Khoule M, Thiam M. N., Mbaye B. T., Thiare O., Cisse M. T., Mangeot M. 2014), which will involve people using Ajami writing. Our goal will consist, on the one hand in raising the issues related to the transliteration and the challenges that this will raise, and on the other one, presenting the perspectives. 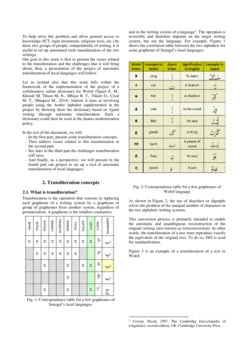 The national languages of Senegal, like those of West Africa country in ...
El hadji M. Fall, et al. ∙

Now a day computer is necessary for human being and it is very useful in...
H Muhammad Shakeel, et al. ∙

Can You Traducir This? Machine Translation for Code-Switched Input

Writing Across the World's Languages: Deep Internationalization for Gboard, the Google Keyboard

Braille to Text Translation for Bengali Language: A Geometric Approach

Braille is the only system to visually impaired people for reading and w...
Minhas Kamal, et al. ∙

Philosophical thinking has a side effect: by aiming to find the essence ...
Attila Egri-Nagy, et al. ∙