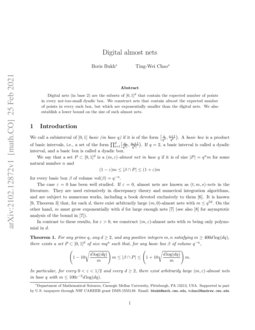 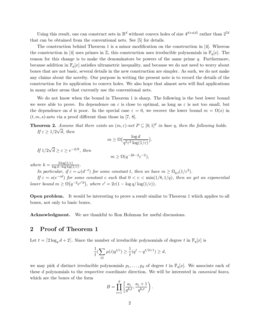 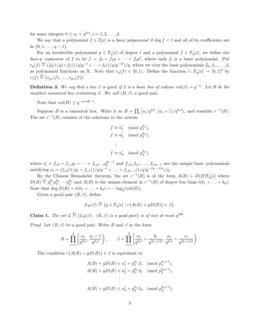 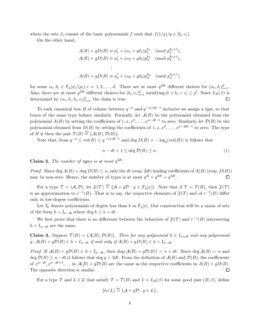 Digital nets are among the most successful methods to construct low-disc...
Pierre Marion, et al. ∙

On weak ε-nets and the Radon number

We show that the Radon number characterizes the existence of weak nets i...
Shay Moran, et al. ∙

Textual analytics based on representations of documents as bags of words...
D. B. Skillicorn, et al. ∙

In many interesting situations the size of epsilon-nets depends only on ...
Andrey Kupavskii, et al. ∙

for every basic box β of volume vol(β)=q−n.

The case ε=0 has been well studied. If ε=0, almost nets are known as (t,m,s)-nets in the literature. They are used extensively in discrepancy theory and numerical integration algorithms, and are subject to numerous works, including a book devoted exclusively to them [6]. It is known [9, Theorem 3] that, for each d, there exist arbitrarily large (m,0)-almost nets with m≤q5d. On the other hand, m must grow exponentially with d for large enough nets [7] (see also [8]

for asymptotic analysis of the bound in

In contrast to these results, for ε>0, we construct (m,ε)-almost nets with m being only polynomial in d.

For any prime q, any d≥2, and any positive integers m,n satisfying m≥400dlog(dq), there exists a set P⊂[0,1]d of size mqn such that, for any basic box β of volume q−n,

Using this result, one can construct sets in Rd without convex holes of size 4d+o(d) rather than 27d that can be obtained from the conventional nets. See [5] for details.

The construction behind Theorem 1 is a minor modification on the construction in [4]. Whereas the construction in [4] uses primes in Z, this construction uses irreducible polynomials in Fq[x]. The reason for this change is to make the denominators be powers of the same prime q. Furthermore, because addition in Fq[x] satisfies ultrametric inequality, and because we do not need to worry about boxes that are not basic, several details in the new construction are simpler. As such, we do not make any claims about the novelty. Our purpose in writing the present note is to record the details of the construction for its application to convex holes. We also hope that almost nets will find applications in many other areas that currently use the conventional nets.

We do not know when the bound in Theorem 1 is sharp. The following is the best lower bound we were able to prove. Its dependence on ε is close to optimal, as long as ε is not too small, but the dependence on d is poor. In the special case ε=0, we recover the lower bound m=Ω(s) in (t,m,s)-nets via a proof different than those in [7, 8].

Assume that there exists an (m,ε)-net P⊆[0,1]d in base q, then the following holds.

It would be interesting to prove a result similar to Theorem 1 which applies to all boxes, not only to basic boxes.

We are thankful to Ron Holzman for useful discussions.

Let t=⌈2logqd+2⌉. Since the number of irreducible polynomials of degree t in Fq[x] is

we may pick d distinct irreducible polynomials p1,…,pd of degree t in Fq[x]. We associate each of these d polynomials to the respective coordinate direction. We will be interested in canonical boxes, which are the boxes of the form

We say that a box β is good if β is a basic box of volume vol(β)=q−n. Let B be the smallest canonical box containing β. We call (B,β) a good pair.

Suppose B is a canonical box. Write it as B=∏i[ai/qkit,(ai+1)/qkit), and consider r−1(B). The set r−1(B) consists of the solutions to the system

Given a good pair (B,β), define

The condition r(A(B)+gD(B))∈β is equivalent to

where the sets Ji consist of the basic polynomials f such that f(1/q)/q∈[bi,ci).

The number of types is at most q3dt.

Let Ik denote polynomials of degree less than k in Fq[x]. Our construction will be a union of sets of the form h+In−dt where degh≤n+dt.

We first prove that there is no difference between the behaviors of Y(T) and r−1(B) intersecting h+In−dt are the same.

Let (B,β) be a good pair such that T=T(B) and L=LB(β). From the previous claim, we know that the size of ¯¯¯¯YT(L) is the same as the size of r−1(β)∩In+dt. By the Chinese remainder theorem, each of the canonical boxes of volume q−(⌊n/t⌋+d)t contains equally many points from r(In+dt). Since n≤(⌊n/t⌋+d)t, the number of points in β∩r(In+dt) is equal to qn+dtvol(β)=qdt. ∎

In the combination with Claim 4, this implies that

Sample qdtm elements uniformly at random from In+dt, independently from one another. Let H be the resulting multiset, and consider the multiset H+In−dt\tiny def={h+f:h∈H,f∈In−dt}. For a type T and L∈L that satisfy T=T(B) and L=LB(β) for some good pair (B,β)

. This random variable is distributed according to the binomial distribution

Hence the multiset r(H+In−dt) in [0,1)d is of size exactly mqn and satisfies the conclusion of the theorem. To obtain a set satisfying the same conclusion, we may perturb the points of r(H+In−dt) slightly to ensure distinctness.

We shall derive Theorem 2 from the following lemma.

The general term of A is given by

and so (2) holds. Hence, we may apply Lemma 4 with ⌈k⌉ in place of k and obtain