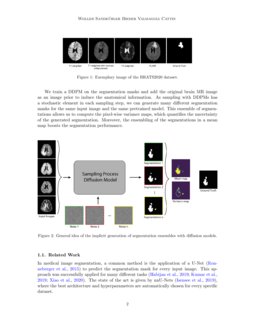 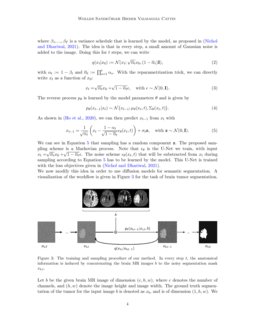 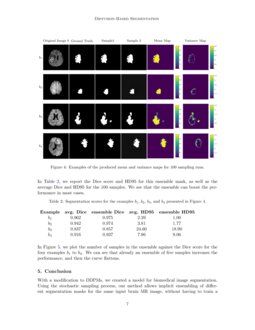 The field of language modelling has been largely dominated by autoregres...
Emiel Hoogeboom, et al. ∙

Quantifying the Unknown: Impact of Segmentation Uncertainty on Image-Based Simulations

. The automated segmentation of lesions in medical images with machine learning has shown good performances

[nnunet] and is ready for clinical application to support diagnosis [trial]. In medical applications, it is of high interest to measure the uncertainty of a given prediction, especially when used for further treatments like radiation therapy. In this work, we focus on the BRATS2020 brain tumor segmentation challenge [brats1, brats2, brats3]. This dataset provides four different MR sequences for each patient (namely T1-weighted, T2-weighted, FLAIR and T1-weighted with contrast enhancement), as well as the pixel-wise ground truth segmentation. An exemplary image is shown in Figure LABEL:fig:brats.

We propose a novel segmentation method based on a Denoising Diffusion Probabilistic Model (DDPM) [DDPM], which can provide uncertainty maps of the produced segmentation mask. An overview of the workflow is shown in Figure LABEL:fig:overview.

In medical image segmentation, a common method is the application of a U-Net [unet] to predict the segmentation mask for every input image. This approach was successfully applied for many different tasks [heart, MS, lung]. The state of the art is given by nnU-Nets [nnunet]

, where the best architecture and hyperparameters are automatically chosen for every specific dataset.

Uncertainty quantification is of high interest in deep learning research

[bayesianseg, validity, galgar], and were also applied on various medical tasks [medbayes1, medbayes2, medbayes3], including brain tumor segmentation [bratsbayes1, bratsbayes2, bratsbayes3]. During the last year, DDPMs have gained a lot of attention due to their astonishing performance in image generation [beatgans]. Fake images are generated by sampling from Gaussian noise. This sampling scheme follows a Markovian process, and therefore sampling from the same noisy image does not yield in the same output image. A different sampling scheme was introduced by Denoising Diffusion Implicit Models (DDIM)[ddim]

, where sampling is deterministic and can be done by skipping multiple steps. Moreover, meaningful interpolation between images can be achieved. DDPM was further improved by

, where changes in the loss objective, architecture improvements, and classifier guidance during sampling improved the output image quality.

The goal is to train a DDPM to generate segmentation masks. We follow the idea and implementation proposed in [improving]. The core idea of diffusion models is that for many timesteps T, noise is added to an image x. This results in a series of noisy images x0,x1,...,xT, where the noise level is steadily increased from 0 (no noise) to T (maximum noise). The model follows the architecture of a U-Net and predicts xt−1 from xt for any step t∈{1,...,T}. During training, we know the ground truth for xt−1, and the model is trained with an MSE loss. During sampling, we start from noise xT∼N(0,I), sample for T steps, until we get a fake image x0. The complete derivations of the formulas below can be found in [DDPM, improving]. The main components of diffusion models are the forward noising process q and the reverse denoising process p. Following [DDPM], the forward noising process q for a given image x at step t is given by

where β1,...,βT is a variance schedule that is learned by the model, as proposed in [improving]. The idea is that in every step, a small amount of Gaussian noise is added to the image. Doing this for t steps, we can write

with αt:=1−βt and ¯¯¯¯αt:=∏ts=1αs. With the reparametrization trick, we can directly write xt as a function of x0:

As shown in [DDPM], we can then predict xt−1 from xt with

We can see in Equation 5 that sampling has a random component z. The proposed sampling scheme is a Markovian process. Note that ϵθ is the U-Net we train, with input xt=√¯¯¯¯αtx0+√1−¯¯¯¯αtϵ. The noise scheme ϵθ(xt,t) that will be substracted from xt during sampling according to Equation 5 has to be learned by the model. This U-Net is trained with the loss objectives given in [improving]. We now modify this idea in order to use diffusion models for semantic segmentation. A visualization of the workflow is given in Figure LABEL:fig:example for the task of brain tumor segmentation.

Let b be the given brain MR image of dimension (c,h,w), where c denotes the number of channels, and (h,w) denote the image height and image width. The ground truth segmentation of the tumor for the input image b is denoted as xb, and is of dimension (1,h,w). We train a DDPM for the generation of segmentation masks. In the classical DDPM approach, xb would be the only input we need for training, which results in an arbitrary segmentation mask x0 during sampling. In contrast to that, the goal in our proposed method is not to generate any segmentation mask, but we want a meaningful segmentation mask xb,0 for a given image b. To achieve this, we add additional channels to the input: We induce the anatomical information present in b by adding it as an image prior to xb. We do this by concatenating b and xb, and define X:=b⊕xb. Consequently, X has dimension (c+1,h,w). During the noising process q, we only add noise to the ground truth segmentation xb:

and we define Xt:=b⊕xb,t. Equation 5 is then altered to

and results in a slightly denoised xb,t−1 with dimension (1,h,w). During sampling, we follow the procedure presented in Algorithm 7. As this sampling scheme follows a Markovian process, sampling from the same noisy image xb,T does not result in the same output image xb,0. Sampling Procedure b, the original brain MRI xb,0, the predicted segmentation mask sample xb,T∼N(0,I)  t←T 1 Xt←b⊕xb,t

We evaluate our method on the BRATS2020 dataset. As described in Section 1, images of four different MR sequences are provided for each patient, which are stacked to 4 channels. We slice the 3D MR scans in axial slices. Since tumors rarely occur on the upper or lower part of the brain, we exclude the lowest 80 slices and the uppermost 110 slices. For intensity normalization, we cut the top and bottom percentile of the pixel intensities. We crop the images to a size of (4, 224, 224). The provided ground truth labels contain four classes, which are background, GD-enhancing tumor, the peritumoral edema, and the necrotic and non-enhancing tumor core. We merge the three different tumor classes into one class and therefore define the segmentation problem as a pixel-wise binary classification. Our training set includes 16,298 images originating from 332 patients, and the test set comprises 1,082 images originating from 37 patients. The hyperparameters for our DDPM models are described in the appendix of [improving]. We choose a linear noise schedule for T=1000 steps. We train the model with the hybrid loss objective, with a learning rate of 10−4 for the Adam optimizer, and a batch size of 16. The number of channels in the first layer is chosen as 128, and we use one attention head at resolution 16. We train the model for 40,000 iterations.

During evaluation, we take an image b from the test set, follow Algorithm 7 and produce a segmentation mask. This mask is thresholded at 0.5

to obtain a binary segmentation. We compare our performance against nnU-Net on the test set with respect to the Dice score, the Jaccard index, and the 95 percentile Hausdorff Distance (HD95). We achieve good results with respect to all metrics, as can be seen in Table

LABEL:tab:example. As baseline, we report the segmentation scores for the nnU-Net. As described in Section 2, sampling with DDPM follows a stochastic process. Therefore, sampling twice for the same brain MRI b does not result in the same segmentation mask prediction xb,0. Exploiting this property, we can implicitly generate an ensemble of segmentation masks without having to train a new model. Using the same model and the same input MR image b, we can implicitly generate an ensemble of infinity many samples. This ensemble can then be used to boost the segmentation performance. For every image of the test set, we sample 5 different segmentation masks. This implicitly defines an ensemble by averaging over the 5 masks and thresholding it at 0.5. We report the results for this ensemble in Table LABEL:tab:example. We see that already an ensemble of 5 increases the performance of our approach. In 55 out of 1028 cases, our method produces an empty segmentation mask, which results in a Dice of zero. This lowers the average Dice score a lot, and HD95 cannot be computed. If we disregard those 55 cases, we report the HD95 score, and the average Dice and Jaccard index is reported in square brackets in in Table LABEL:tab:example. The nnU-Net produced empty masks for 20 images of the test set.

For visualization of the uncertainty maps, we select four exemplary images b1, b2, b3, and b4 from the test set. By sampling for 100 runs for each of the images, we can generate uncertainty maps by computing the pixel-wise variance of the 100 samples. In Figure 4 we present one channel of the original brain MRI b (the T1-weighted MR sequence with contrast enhancement), the ground truth segmentation, two different sampled segmentation masks, as well as the mean and variance map for 100 sampling runs. We can clearly identify the areas where the model was uncertain. Moreover, by thresholding the mean map at 0.5, we can produce the ensembled segmentation mask. In Table LABEL:tab:ens, we report the Dice score and HD95 for this ensemble mask, as well as the average Dice and HD95 for the 100 samples. We see that the ensemble can boost the performance in most cases.

In Figure LABEL:fig:plot, we plot the number of samples in the ensemble against the Dice score for the four examples b1 to b4. We can see that already an ensemble of five samples increases the performance, and then the curve flattens.

This research was supported by the Novartis FreeNovation initiative and the Uniscientia Foundation (project # 147-2018).