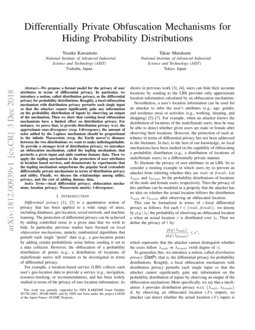 Much of the literature on differential privacy focuses on item-level pri...
Yuhan Liu, et al. ∙

On the Anonymization of Differentially Private Location Obfuscation

is a quantitative notion of privacy that has been applied to a wide range of areas, including databases, geo-location, social network, and machine learning. The protection of differential privacy can be achieved by adding controlled noise to a given data that we wish to hide. In particular, previous studies have focused on

local obfuscation mechanisms, namely, randomized algorithms that perturb each single “point” data (e.g., a geo-location point) by adding certain probabilistic noise before sending it out to a data collector. However, the obfuscation of a probability distribution of points (e.g., a distribution of locations of male/female users) still remains to be investigated in terms of differential privacy.

For example, a location-based service (LBS) collects each user’s geo-location data to provide a service (e.g., navigation, resource-trucking, or recommendation), and has been widely studied in terms of the privacy of user location information. As shown in previous work [3, 4], users can hide their accurate locations by sending to the LBS provider only approximate location information calculated by an obfuscation mechanism.

Nevertheless, a user’s location information can be used for an attacker to infer the user’s attributes (e.g., age, gender, and residence area) or activities (e.g., working, sleeping, and shopping) [5, 6, 7]. For example, when an attacker knows the distribution of locations of the male/female users, then he may be able to detect whether given users are male or female after observing their locations. However, the protection of such attributes in terms of differential privacy has not been addressed in the literature. In fact, to the best of our knowledge, no local mechanisms have been studied on the capability of obfuscating a probability distribution (e.g., a distribution of locations of male/female users) in a differentially private manner.

To illustrate the privacy of user attributes in an LBS, let us consider a running example in which users try to prevent an attacker from inferring whether they are male or female. Let λmale and λfemale be the probability distributions of locations of the male and female users, respectively. Then the privacy of this attribute can be modeled as a property that the attacker has no idea on whether the actual location follows the distribution λmale or λfemale after observing an obfuscated location.

This can be formalized in terms of ε-local differential privacy as follows. For each t∈{male,\allowbreakfemale},  we denote by p(y|λt) the probability of observing an obfuscated location y when an actual location x is distributed over λt. Then we define the privacy of t by:

which represents that the attacker cannot distinguish whether the users follow λmale or λfemale (with degree of ε).

In this section we recall some notions of privacy and metrics used in this paper, including differential privacy, its variant notions, probability coupling, and the Wasserstein metrics.

We use the following notations in the paper. We denote by DX the set of all probability distributions over a set X, and by |X| the number of elements in a finite set X.

Given a finite set X and a probability distribution λ∈DX, the probability of drawing a value x from λ is denoted by λ[x]. For a finite subset X′⊆X we define λ[X′] by: λ[X′]=∑x′∈X′λ[x′]. Given a λ∈DX and a function f:X→R, the expected value of f over λ is defined by: \operatornamewithlimitsEx∼λ[f(x)]def=∑x∈Xλ[x]f(x).

For a randomized algorithm A:X→DY and a set R⊆Y we denote by A(x)[R] the probability that given input x, A outputs one of the elements of R. Given a randomized algorithm A:X→DY and a probability distribution λ over X, we define A#(λ) as the distribution of the output y produced by Algorithm 1. Formally, for a finite set X, the lifting of A w.r.t. X is the function A#:DX→DY such that A#(λ)[R]def=∑x∈Xλ[x]A(x)[R].

We first recall the notion of (approximate) max divergence, which is used to define differential privacy.

Next we recall the notion of the f-divergences [9]. As shown in Table I

Let F be the collection of functions defined by:

We denote by Div(Y) the set of all divergences over Y.

Differential privacy [1, 2] captures the idea that given two “adjacent” inputs x and x′ (from a set X of data with an adjacency relation Φ), a randomized algorithm A cannot distinguish x from x′ roughly (with degree of ε and up to some exceptions parameterized by δ).

where the probability is taken over the random choices in A.

Clearly the protection of differential privacy is stronger for smaller ε and δ. It is known that the above definition is equivalent to the following one using max-divergence.

Differential privacy can be achieved by a privacy mechanism, namely a randomized algorithm that adds probabilistic noise to a given input that we want to protect. The amount of noise added by some popular mechanisms (e.g. the Laplace mechanism and the exponential mechanism) depends on a utility function u:X×Y→R that maps a pair of input and output to a utility score. More precisely, the noise is added according to the “sensitivity” of u, which we define as follows.

Given a utility function u:(X×Y)→R, the utility distance w.r.t u is the function d:X×X→R≥0 defined by:

Note that d is a pseudometric. Hereafter we assume that for all x,y, u(x,y)=0 is logically equivalent to x=y. Then the utility distance d is a metric.

The sensitivity of a utility function u w.r.t. an adjacency relation Φ⊆X×X is defined as:

For example, the exponential mechanism, defined below, perturbs the output according to the sensitivity ΔΦ,d and provides ε-differential privacy w.r.t. Φ.

Let ε∈R≥0. The exponential mechanism is the randomized algorithm Eε:X→DY that, given an input x, outputs y with the probability:

We review the notion of extended differential privacy [12], which relaxes differential privacy by incorporating a metric d. Intuitively, this notion guarantees that when two input values x and x′ are closer in terms of d, then the output distributions are less distinguishable.

where the probability is taken over the random choices in A.

Note that this notion can be seen as an extension of (ε,δ)-DP from an adjacency relation Φ to a metric d on inputs.

We recall the notion of probability coupling as follows.

Example 1 (Coupling as transformation of distributions).

We then recall the p-Wasserstein metric [13] between two distributions λ0 and λ1, which is defined using a coupling γ of λ0 and λ1 as follows.

We denote by Γp,d the set of all couplings that achieve the p-Wasserstein metric Wp,d; i.e.,

Finally, we recall the notion of the lifting of relations.

Given a relation Φ⊆X×X, the lifting of Φ is the maximum relation Φ#⊆DX×DX such that for any (λ0,λ1)∈Φ#, there exists a coupling γ∈cp(λ0,λ1) satisfying supp(γ)⊆Φ.

Note that by Definition 7, the coupling γ is a probability distribution over Φ whose marginal distributions are λ0 and λ1. If Φ=X×X, then Φ#=DX×DX.

Then we restrict the lifting in Definition 9 to use only the couplings that achieve the p-Wasserstein metric Wp.

As a running example, we consider an LBS (location based service) in which each user queries an LBS provider for a list of restaurants nearby. By observing a user’s location, the LBS provider may be able to infer the user’s attributes (e.g., age, gender, and residence area) and activities (e.g., working, sleeping, and shopping) [5, 6, 7].

To hide a user’s exact geo-location x from the provider, the user reveals only approximate information y on x to the provider [3]. More specifically, he applies a randomized algorithm A:X→DY, called a local obfuscation mechanism, to his location x, and obtains an approximate information y with the probability A(x)[y]. When A is the randomized response [8] (resp. the Laplace mechanism), it guarantees the protection of x in terms of differential privacy (resp. extended differential privacy). However, to the best of our knowledge, no prior work has investigated how an obfuscation mechanism A may or may not prevent the attacker (e.g., the LBS provider) from inferring user attributes by obfuscated locations.

To illustrate the privacy of user attributes, let us consider an example in which users try to prevent an attacker from inferring whether they are male or female by obfuscating their own exact locations using a mechanism A. For each attribute t∈{male,female}, let λt∈DX be the prior distribution of the location of the users who have the attribute t. Intuitively, λmale (resp. λfemale) represent an attacker’s belief on the location of the male (resp. female) users before the attacker observes an output of the mechanism A. Then the privacy of t can be modeled as a property that the attacker has no idea on whether the actual location x follows the distribution λmale or λfemale after observing an output y of A.

This can be formalized in terms of ε-local differential privacy. For each t∈{male,\allowbreakfemale},  we denote by p(y|λt) the probability of observing an obfuscated location y when an actual location x is distributed over λt, i.e., p(y|λt)=∑x∈Xλt[x]A(x)[y]. Then we define the privacy of t by:

which represents that the attacker cannot distinguish whether the users follow λmale or λfemale (with degree of ε). In Section III-F, we will present the case where an attacker has a different belief on λmale and λfemale.

For example, the privacy of a user attribute t∈{male,\allowbreakfemale} described in Section III-A can be formalized as (ε,0)-distribution privacy w.r.t. {λmale,λfemale}.

where the probability space is taken over the choices of randomness in A.

By definition, (ε,0)-DistP is equivalent to (ε,0)-PDistP. In general, however, (ε,δ)-DistP does not imply (ε,δ)-PDistP, while (ε,δ)-PDistP implies (ε,δ)-DistP. We show the formal statements and their proofs in Appendix A-E.

The interpretation of differential privacy has been explored in previous work [16, 12, 17] in particular using the notion of Bayes factor. Similarly, the meaning of distribution privacy can also be explained in terms of Bayes factor, which compares the attacker’s prior and posterior beliefs as follows.

Assume that the attacker has some belief on the input distribution before observing the output values of an obfuscater A. We denote by Λ a set of probability distributions (that we wish to make indistinguishable), and by p(λ)

the prior probability that a distribution

λ is chosen from Λ as the input to the obfuscater A. By observing an output value y of A, the attacker updates his belief on the input distribution. We denote by p(λ|y)

the posterior probability of a distribution

λ being chosen (from Λ) given an output value y of A.

Assume that A provides (ε,0)

Intuitively, if the attacker believes that λ0 is k times more likely than λ1 before the observation, then he believes that λ0 is k⋅eε times more likely than λ1 after the observation. This means that for a small value of ε, distribution privacy guarantees that the attacker does not gain information on the distribution by observing the perturbed output y.

In the case of extended distribution privacy, the Bayes factor K(λ0,λ1,y) is bounded above by eεd(λ0,λ1). Hence the attacker gains more information on the distribution for a larger value of the distance d(λ0,λ1).

Similarly, when A provides (ε,d,0)-XDistP, we have:

Therefore, when the attacker’s beliefs are closer to ours, then a stronger distribution privacy is guaranteed.

In this section we generalize the definitions of distribution privacy and its extended form w.r.t. an arbitrary divergence D. Then we show their useful properties, including the compositionality and the relationships among privacy notions.

To generalize distribution privacy, we first present a generalized formulation of privacy notions including differential privacy, which is parameterized with a divergence D that determines the capability of distinguishing the output distributions.

Next we generalize the notion of extended differential privacy (Definition 6) to an arbitrary divergence D.

Intuitively, we say that a randomized algorithm A provides (ε,D)-distribution privacy w.r.t. a set Ψ of pairs of distributions if for each pair (λ0,λ1)∈Ψ, a divergence D cannot detect which distribution (of λ0 and λ1) is used to generate A’s input value.

Definition 16 (DistP generalized to a divergence).

Definition 17 (XDistP generalized to a divergence).